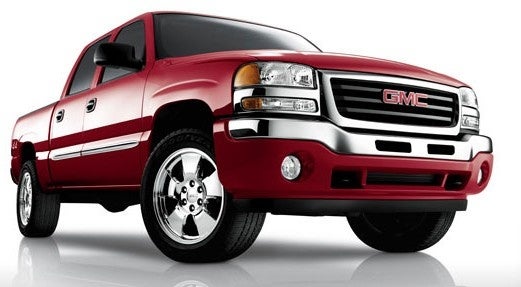 As GMC struggles to compete with the more well-known and established Ford and Dodge Ram pickups, its 2006 GMC Sierra 1500 is a competent rival, especially when equipped with new performance packages for 2006. The half-ton pickup is also the only one in its class to offer a hybrid engine. New this year is an additional trim, the SLE2, as well as some tweaks to the front end, and the loss of the Quadrasteer system. Also new are extended folding mirrors, for better visibility.

The rear-wheel drive pickup comes in a two-door, two-seater Regular Cab, 4-person Extended Cab (with reverse-hinged rear doors), and four-door Crew Cab, and six trim levels, depending on the Cab size. The Work trim is your basic functional pickup, while moving up through SL, SLE, and SLT add more convenience and luxury features, such as leather seats. The high-end Denali (Crew Cab only) pretty much packs everything in and adds all-wheel drive. Four-wheel drive options are available on the other trims, one of which can be used on dry pavement. Bed size ranges from 5.8 feet in the Crew to either 6.6 or 8 feet in the Extended and Regular. A 4.3 V6 puts out 195-hp, and there are three V8 choices (4.8, 5.3, and 6.0-liter) that range from 285 to 345-hp. A hybrid version of the 5.3 is available in some states. While it doesn't power the pickup, it does improve fuel economy by shutting off and restarting the engine when stopped in traffic.

New this year is a VortecMAX Performance Edition package, which feature the 6.0 V8 and adds options such as a heavy-duty trailer setup, a beefed-up rear axle, 20-inch wheels, and a heavy-duty suspension. Outfitted this way, the 2006 GMC Sierra 1500 can tow up to 10,000 pounds, and is a tough alternative to the more popular Ford and Dodge offerings. Highlights of the 2006 Sierra 1500 include its power, passenger room, convenience features, and smooth shifting. Drivers also say they get better fuel economy than with other full-size pickups. Lowlights are the boring and outdated interior and uncomfortable seats.

GuruKL51G I prefer Dodge because I have one and no complaints

How Do You Take The VIN Off My Listing ?

How do you take the VIN off my listing ? I've tried several times but your app doesn't allow. Please remove my VIN.

Break Pedal Gets Hard While Driving.

2006 GMC breaks are normal when start driving, after a couple of miles break pedal gets hard and the breaks drag!

Like to replace tie rod end on a 2006 GMC 1500 truck. Bit confused as to the difference in rod ends for power gear steering and power rack and pinion steering. Not sure what to order.

I have a 2006 gmc sierra 1500 with a 5.3 and it won't start due to no spark. Have replaced crank sensor and still no spark. Any suggestions?

859 views with 8 answers (last answer about a year ago)