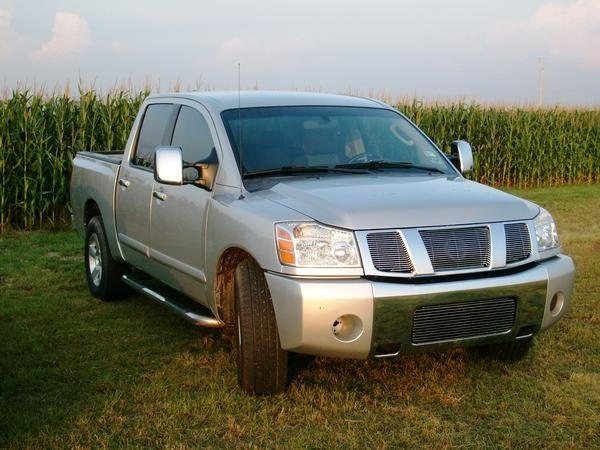 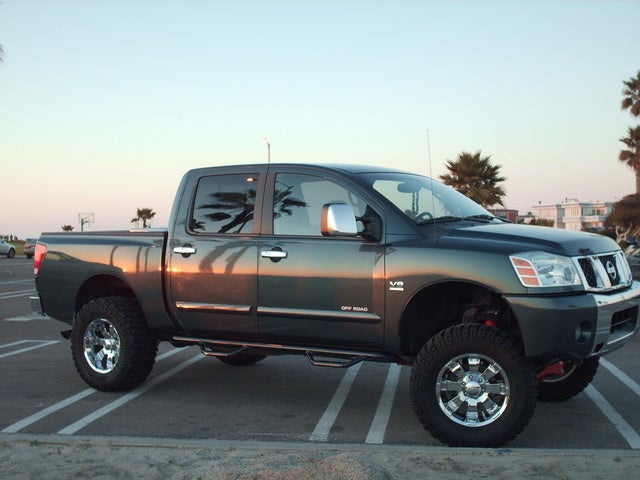 As its name implies, the all-new 2004 Nissan Titan is big and powerful. In fact, in 2004, it was the biggest Japanese-produced pickup yet produced. Clearly trying to compete with the industry-leading domestic pickups, the 2004 Titan has better torque and more interior leg and headroom than its American rivals. It comes as either a 2WD or 4WD in Crew or King Cabs. The King is the extended cab version. Both are four-doors. No two-doors are offered. Power comes from a 305-hp, 5.3-liter DOHC V8 and 5-speed automatic, putting out 379 lb-ft of torque at 6000 rpm. Towing capacity is a meaty 9,500 pounds. Two cargo beds are offered -- a 5'7" and a 6'6".

Three trim levels take you up the convenience chain. The XE is the base model, with air conditioning and a CD. SE adds larger 18-inch wheels and front row captain's chairs in place of the 40/20/40 front bench. The LE adds power front seats and leather upholstery, plus an optional sunroof. ABS brakes, dual front airbags, a tire monitor are standard, with side curtain bags and stability control optional. The 2004 Titan also offers some segment innovations in the cargo bed. The Utili-track rail system on the floor and sides allows you to attach objects onto it. And a factory-installed sprayed-in bedliner to help protect the bed is surprisingly the first of its kind. Other options include an off-roading package.

There are lots of storage compartments, including an armrest console with the front bench seat. A lockable box in the bed is also a nice touch. Interior room is spacious, with the King Cab featuring 180-degree rear doors for easier passenger or loading access. Drivers of the 2004 Nissan Titan praise its power, pickup, and towing capabilities, saying it rivals the F-150. While providing the heft of a truck, it handles a lot like a car, though the turning radius is noticeably large. Other highlights include the styling, the Utili-track, and the roominess. Criticisms focus on the low gas mileage, cheap-looking interior materials, and long-term seat comfort. There is an issue with early brake wear, and Nissan customer service does not impress owners.

Users ranked 2004 Nissan Titan against other cars which they drove/owned. Each ranking was based on 9 categories. Here is the summary of top rankings.

Have you driven a 2004 Nissan Titan?
Rank This Car

I have a 2004 Nissan Titan with a 5.6 motor. Code says the cam sensor but I have already replaced it. Is there another one?

My 2004 Nissan Titan 5.6 V8 passin gear starts to chug & stall out at 50 to 60 mph, no problem with gradual acceleration, thinking fuel filter ? Any suggestions ?

Why Won't My Nissan Titan Start After Battery Replacement

I had replaced my battery about two weeks prior to the problem of the truck not starting. Truck is my daily driver but sat for two days over the weekend. Went to start it before work one morning a...

Did I Do Something Wrong?

Changed battery and now everytime I try to start it the radio loses power and no turnover from engine; any ideas?