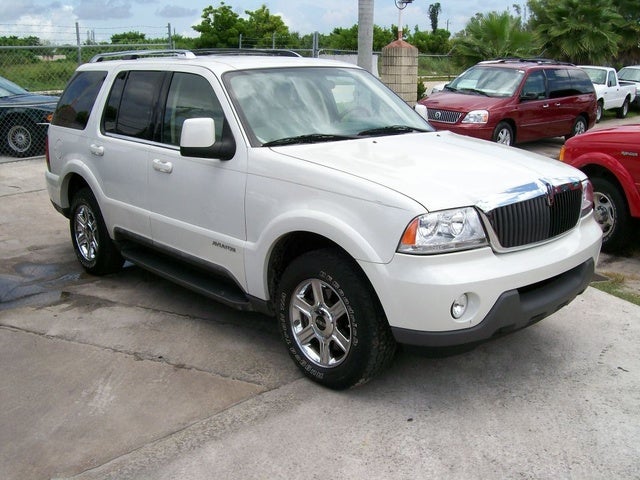 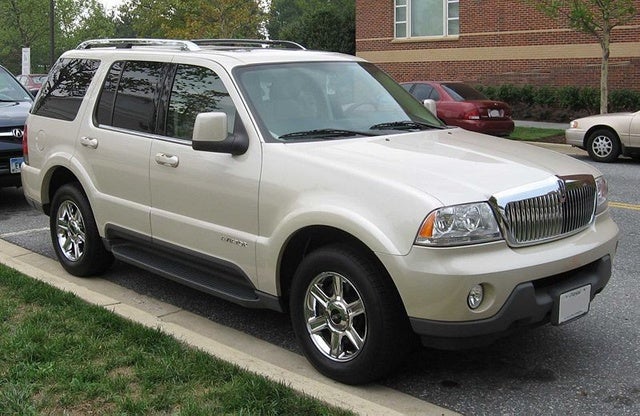 The 2004 Lincoln Aviator won't quite take flight, since it's built on the same truck-like body-on-frame platform as the Ford Explorer. But this luxury midsize SUV ups the Explorer and similar Mercury Mountaineer by adding a lot more features and a nice helping of luxurious comfort. Styling cues and standard equipment are taken from its bigger and more unwieldy Navigator sibling (including three rows of seats), but in a much smaller and easier-to-drive package. About 6.5 inches shorter, with a 113-inch wheelbase, the 2004 Aviator seats six or seven in three rows, depending on whether you opt for the standard second-row captain's chairs with foldable center console or a second-row bench seat for three. The third-row bench seats two and is better suited for children or adults with short legs. Although the third row doesn't fold completely flat, cargo area expands from a tiny 12 cubic feet to an impressive 77 cubic feet with the seats down. The rear liftgate opens separately from the rear window, offering different access options.

Powered by a 4.6-liter, 302-hp V8 and a 5-speed, shiftable automatic, the 2004 Aviator is available as a Base trim or Ultimate, both available with either rear-wheel drive or two forms of automatic all-wheel drive. The AWD is meant more for tricky road conditions than off-roading, since it lacks low-range gearing. Base models are well-equipped with power front seats, creamy leather upholstery, power-adjustable pedals, a CD player, and dual-zone climate control, while the Ultimate adds heated and cooled seats, a newly upgraded 6-CD changer, and xenon headlights. Interior trappings take cues from the Navigator, with large and well-lit gauges, an analog clock, and real wood and satin nickel trim. Safety-wise, the Aviator earns top marks, and all models come standard with 4-wheel ABS, dual front and side curtain airbags for the first two rows, foglights, and parking sensors. For 2004, a tire monitor is added. Stability control and AdvanceTrac traction control are optional, and in 2004 a rollover detection system gets bundled with the traction control.

Other additions to the 2004 Aviator include an optional touch-screen navigation system and satellite radio. Since it offers many of the same features and similar styling, the Aviator is a nice alternative for those who might be intimidated by the Navigator's size. Its V8 engine offers good power, and for the select few who might actually use the SUV for utility purposes, the Aviator can tow up to 7,300 pounds. Drivers like the third row, though they say it is cramped, and feel the Aviator is easy to drive. Downsides include an expensive pricetag coupled with poor 13/19 mpg fuel economy, some road noise despite the thick, performance-glazed glass that's meant to solve this problem, and the lack of fold-flat seats. Another criticism points out the rough ride and truck-like feel of the suspension, especially on city roads.

What's your take on the 2004 Lincoln Aviator?

Christopher Issues with the all wheel drive?

Have you driven a 2004 Lincoln Aviator?
Rank This Car

Is there any other vehicle that’s headlight assemblies that can be used for an aftermarket swap into my aviator?

Why would the instrument panel lights on a 2004 Aviator come on and off when driving. This does not happen all the time and when it does they quit blinking after a while

2004 Lincoln Aviator V8 with a 4R100 Transmission AWD Just bought this vehicle and I notice a shutter when shifting, Sometimes and not others. Seem to do it about the time it is shifting into 3rd or O...

918 views with 5 answers (last answer about a year ago)

Why Is My Front Driver's Side Wheel Locking Up?

I just replaced the hub assembly, rotor, brake caliper and brake pads on my 2004 Aviator. I had it check and was told I need new bushings and a boot on the drive line. But it clicks very loudly wh...

Overheating After 10 Minutes Of Driving

Hello! I have a Lincoln Aviator 04 V8! The fluid in there but it will overheat and shut off. Then after 30 minutes or so it will cool down. I did the heater thing and it did not produce heat and it...