Average user score
4.5 ⁄ 5 stars
Based on 85 reviews
A Typical Jeep Now W/ Luxury by Mike — Performance is brisk with the V8, but since the car is so heavy is seems burdened at some points. Gas mileage is dismal, but you know what you are getting into when you buy a car like that. In my 16 ... Read more
Best Car I Have Ever Owned. by Jess_Henke712 — Performance- Great brand new tires, new brakes, drives like a charm, if you like to feel it accelerate this is it. Build Quality- perfect, has an exhaust which is sounds awesome. Appearance- Outsid... Read more
Great Mid-size 4wd Executive Work Vehicle. by allenstine — The classic lines and of the 2004 Grand Cherokee were not as strong in future years. Cleans up easily and shows off great. Every time it is detailed, people think I have a much newer vehicle. Great po... Read more 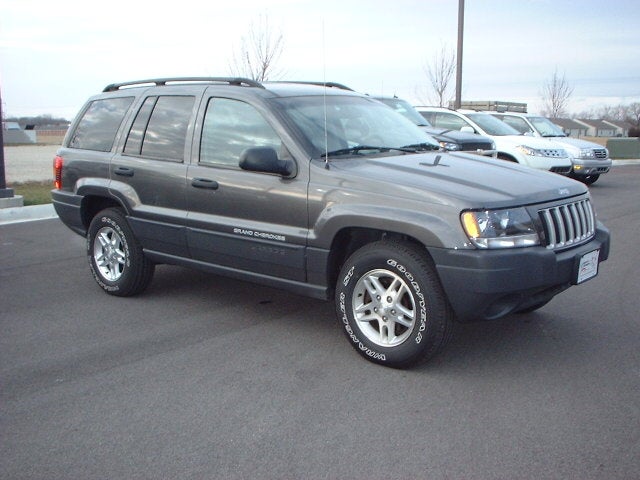 For 2004, the Grand Cherokee received a facelift that included a restyled front fascia. Jeep expanded the Grand Cherokee line to five trims for 2004: Laredo, Limited, and Overland continue, and new Special and Freedom Editions trims were added.

A 4.0-liter six-cylinder engine comes standard on the Laredo, Special Edition, Freedom Edition, and Laredo. This inline six with overhead valves is rated at 195 horsepower and 230 pound-feet of torque. The six-cylinder comes with a four-speed automatic. A 4.7-liter overhead-valve V8 that develops 235 horsepower and 295 pound-feet of torque and comes with a five-speed automatic transmission is also available.

A high-output version of the 4.7-liter V8, with 265 horsepower and 325 pound-feet of torque, is standard on Overland and optional on Limited, Special Edition, and Freedom Edition trims. The V8 comes with the five-speed automatic transmission plus Goodyear Wrangler Eagle ES P235/65R17 tires.

The Laredo, the base trim, comes with a good deal of standard equipment, including a six-speaker Infinity sound system with CD player, cloth upholstery, a six-way power driver's seat, tilt steering, cruise control, and power windows, mirrors, and locks.

The paint appears to chip, however, and that certainly displeases owners. Gas mileage is also lower than drivers would like.

What's your take on the 2004 Jeep Grand Cherokee?

easterwabit where is the search problems section

Users ranked 2004 Jeep Grand Cherokee against other cars which they drove/owned. Each ranking was based on 9 categories. Here is the summary of top rankings.

Have you driven a 2004 Jeep Grand Cherokee?
Rank This Car

Why Does My Jeep Have No Oil Pressure?

Light to check gauges came on as soon as I started the engine. Low oil pressure reading. Checked the oil and other than a little dirty, the level looks fine. Would help to run it and warm it up to...

Need a front track bar, anyone have long term success with one other than a Mopar.

My Jeep starts and runs great when it hasn’t been running for at least an hour, but after I drive it to the store and go in for a few minutes, when I start it back up and it runs pretty rough, so...

When Driving My Oil Pressure Gauge Drops .if I'm At. Light And Rev Up To Ge...

204 views with 2 answers (last answer about a week ago)

What's The Name Of That Part?