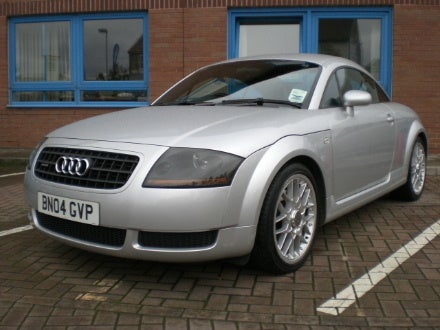 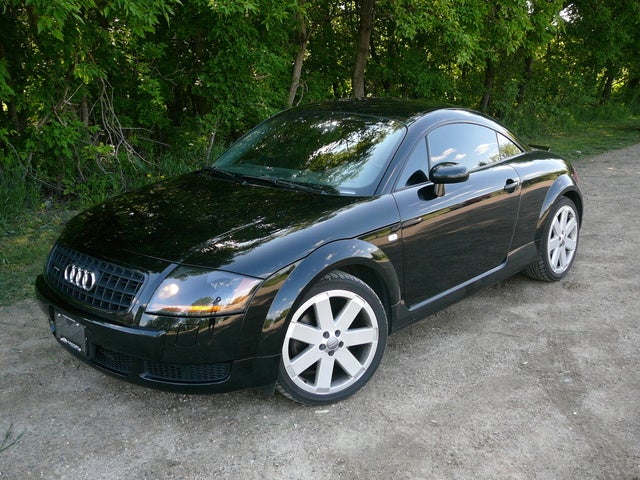 One problem that has plagued the Audi TT over the years is that its sleek one-of-a-kind styling promises a sportier ride than it's actually been able to deliver. Although the 225-hp 4-cylinder engine in the quattro trims improves performance a bit, the quattro all-wheel-drive system adds enough weight to the car to prevent it from really cutting loose.

The 2004 Audi TT tries to solve that by offering a 3.2-liter V6 engine that produces 250 horsepower. Like the base 1.8-liter, 180-hp engine and the 1.8-liter, 225-hp turbo in the mid-level quattro trims, the 3.2 is available in either the 2-door Coupe or convertible Roadster. It's paired with a new DSG (direct-shift gearbox), virtually a dual clutch manual transmission that lets you move seamlessly between automatic and manual modes, providing quicker transition between gears. The goal is to remove turbo lag and improve overall acceleration performance. The base 1.8-liter still comes with the 6-speed Tiptronic, and the 225-hp turbo has a 6-speed manual. Quattro AWD is offered only with the turbo and 3.2-liter engines, while the base Coupe and Roadster have front-wheel drive.

Other minor changes in the 2004 TT include xenon headlamps across the line, a stiffer suspension, and some minor facial changes. The 3.2 trims get a larger spoiler to complement their more powerful engine, 18-inch tires, and corner gills.

The new powertrain adds more fun and flair to the driving experience, with better off-the-line capabilities and behavior more fitting to a convertible sports car. The 2004 TT quattro trims gain owner praise for the way they stay glued to the road thanks to AWD and their precise cornering and maneuverability. Drivers like the fuel economy, at a respectable 20/29 mpg, and enjoy the fact that turbo lag is nonexistent on the 3.2-liter V6 (because it has no turbo). But the same old criticisms still haunt the TT. These include poor rear visibility that hampers parking and the lack of power seats in an expensive and stylish car. Owners would also like a center armrest. As always, reliability is an issue and Audi dealerships don't win many fans.

How Can Price Ratings Be So Different?

How can two cars, same year, make, model in the same state listed for the same price with similar mileage and one is marked Fair Price and one is Over Priced? 2004 Audi TT coupe.

2004 Audi TT starts then immediately shuts down. Will do that over and over then 30 minutes later starts and runs fine. Security system shutting it down???

How Can I Open The Boot Of My Audi TT With A Dead Battery. Stupid Thing

I would like to sell my vehicle and purchase another