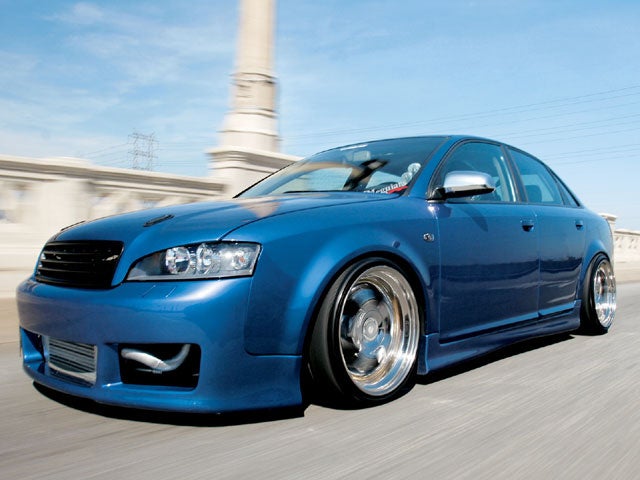 Inexplicably gone for 2003, the 2004 Audi S4 gets a makeover along with the A4, the platform on which it's based. First off, it now comes in three trims -- a sedan, Avant wagon, and a two-door Cabriolet convertible. All trims feature quattro all-wheel drive. In an attempt to keep up with sports car performance, an even bigger engine was somehow crammed into the compact A4 with a few tweaks to the block. It's no longer turbocharged, but the new engine is an impressive 4.2-liter, 40-valve V8 rated at 340-hp, with recorded 0-60 in 5.2 seconds. A six-speed manual or 5-speed Tiptronic are the transmission choices. Combined with the revised aluminum suspension (the lighter weight improves handling and balance) and sports tuning, one touch on the gas will send you rocketing down the highway.

You wouldn't know it to look at it. Outside, the 2004 S4 maintains the classic Audi lines, subdued and sophisticated. 18-inch wheels, a subtle spoiler, and a lower ride height are its distinguishing features. Like the expanded A4, the S4 supposedly has more rear legroom, though most owners agree it still isn't enough and is only suitable for young kids. Standard features are too numerous too mention, some enticements include Recaro sports seats, leather upholstery, power adjustable sesats, wood trim, dual climate control, keyless entry, and a trip computer. Optional packages add aluminum trim, heated seats, OnStar, a navigation system, and a power sunroof.

No doubt, the increased engine power impresses 2004 S4 owners. What appears to be a sedate family or commuter car is actually a rocket on the highway, yet its crisp handling and smooth shifting are well-suited to city driving as well. Drivers love the clamped-down grip of the quattro AWD. Acceleration and speed will impress envious Corvette owners. Low points include a small trunk opening, worthless cupholders, and the rear legroom. Some say the car is too heavy to get real sports performance out of it, and the gas consumption is wallet-drainingly phenomenal. One drawback of its understated style is the tendency to overlook the Audi S4 when shopping around for a sports car.

I bought a car in March from a seller using GarGurus. The registration expires next month, in June. I haven't received a renewal notice from DMV yet. Is there something I need to do?

I'm thinking of buying this car but I'm worried about the mileage. The car is very clean, has been boosted and seems to have been taken care of . Is it worth the risk ?