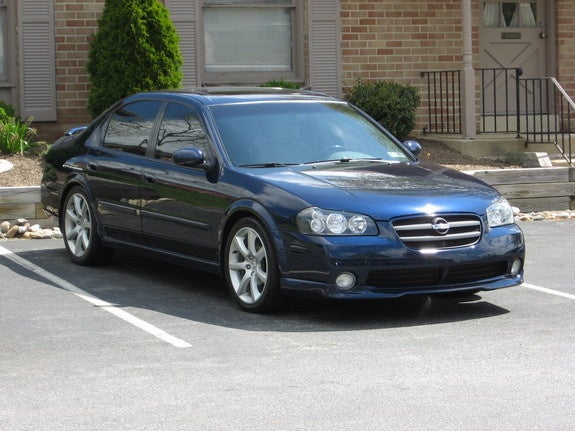 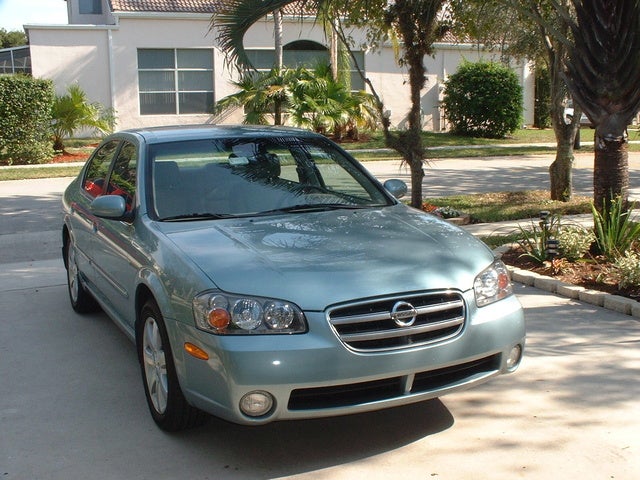 You need enough room for your family, yet you don't want to sacrifice luxury. And the 20-year old youth in you craves a fun and sporty ride. The 2002 Nissan Maxima tries to fill all those roles by upping its horsepower this year and adding sportier exterior and interior trimmings. Available in base GXE, sports-oriented SE, and upscale GLE models, the 2002 Maxima gets a new 3.5-liter, 255-hp V6 engine this year. While a 4-speed auto tran is standard for the GXE and GLE, the V6 on the SE is matched to a new 6-speed manual gearbox, to enhance driving performance and feel.

Aside from some fiddling with the grille and light design, many of the additions in 2002 have to do with more standard features. All of the Maximas now feature xenon headlights, which improve visibility, but apparently are a target for thieves looking for aftermarket parts for earlier Maximas. All models get 8-way power seats, while the GLE gets dual power front seats with a driver's memory setting. The base GXE is much more loaded than in 2001, with new 16-inch wheels, steering wheel-mounted audio, cruise control, a garage opener, CD player, and auto-dimming mirror. For 2002, the GLE gets upgraded audio and an optional navigation system. A trip computer is also new for all models this year, and a sunroof is optional on both the SE and GLE.

A roomy interior seats five, and rear seats split-fold and feature a trunk pass-through. Seat comfort overall is more supportive. The SE remains the choice of driving enthusiasts, with a stiffer suspension, performance tires, a rear spoiler, leather-wrapped wheel, and chrome exhaust pipes. Though drivers love the extra power, more aggressive styling, and family-sized room in the 2002 Maxima, many opt for the cheaper Altima, which is similarly equipped and is actually the Maxima's chief competition. Drawbacks to Maxima ownership include a wide turning radius, poor customer service, low fuel economy, and a so-so sound system.

Chelle_44 I put a valve gasket cover set on my 2002 Nissan Maxima then the next morning my break and battery light came on now my whole car is dead I had to unlock the door with my key but the car has no power what could be wrong??

Have you driven a 2002 Nissan Maxima?
Rank This Car

I did a scan on my 2002 Nissan Maxima GLE 3.5 D6 and got an evap fail on the module check it's the only one that failed. What do I need to do to correct this?

Ok guys or gals car has that rock/gravel sound passenger side of engine. In 2004 a recall on cam sensor was replaced. Been making very low grade sound for long time maybe 8 months off and on...th...

295 views with 3 answers (last answer about a year ago)

How To Crank My Nissan Maxima 2002 Without A Switch?

I got a 2002 Nissan Maxima the switch has been knocked out of it I need to bypass the chip and the switch how do I do that I know there's a little box under the dash but I don't know what I'm looki...

How To Disarm Anti Theft On 2002 Nissan Maxima

My 2002 Nissan Maxima GLE turns over but will not start. Every light in the car is on. I tried to crank it but it wont start. There is a noise coming from the hood. And its also a whirring noise I c...