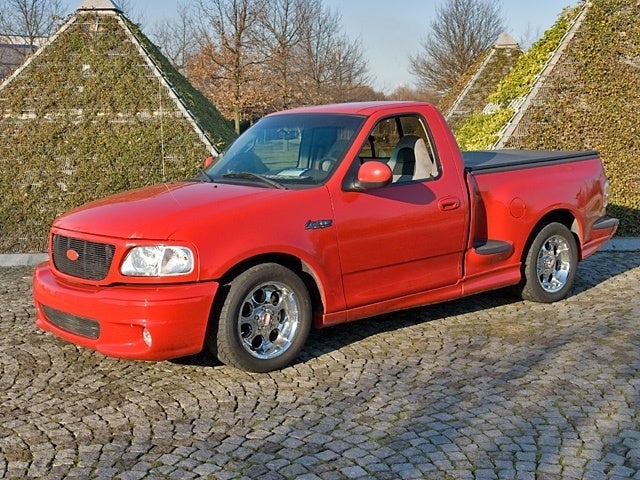 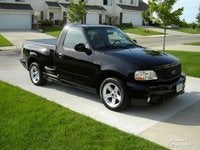 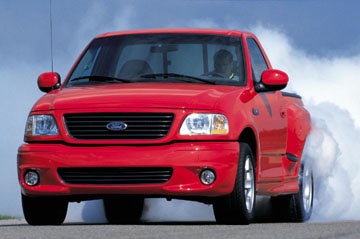 The 2002 Ford F-150 SVT Lightning saw no significant changes for the model year, except for the addition of a new color, blue, to the previous choices of white, red, black, and silver. Other than that, the 2002 Lightning relied on its reputation for sleek styling and sporty handling to appeal to the performance truck market.

Features like specialized 18-inch wheels, a modified suspension (based on the classic F-150 platform, but lowered and stiffened for improved handling), a 31mm stabilizer bar, and a 4.5 inch aluminum driveshaft, added to the 2002 Ford F150 Lightning's racetrack mystique.

However, it was the engine that really made the difference for buyers and fans of this powerhouse pickup. The 2002 Lightning had a 5.4 liter supercharged Triton V8 under the hood, which putting out 380 horsepower and 450 ft/lbf of torque. This tremendous engine power, combined with the suspension and chassis modifications, made the SVT Lightning one of the few trucks on the market with the acceleration and handling of a true sportscar.

Despite the SVT Lightning's cult following, production runs remained low. You'll be lucky to find one of these little beauties on the resale market!

Mitch While I love my Lightning, it's power is more for straight away speed.

Inside Tire Wear On Front Tires Of My 2002 Ford Lightning

I have a 2002 lightning and the inside of the front tires keep wearing badly I put a caster camber kit on it and the alignment is perfect according to factory settings and no front end parts are wor...

Why doesnt my boost gauge in my 2002 ford lightning move?

How Does CG Know If The Price Is Fair, Bad Or Good?

I'm seeing values on NADA that suggest the truck I want to buy are $5K less than what is advertised on the truck, but CarsGuru.com says it is a fair deal and it is over priced by $68. Who, how, do you...

Oil Comming Out Of My Twin Bore Throttle Body

2002 ford lightning with 27,000 miles. change the air box to a cold air system. when changing the box found oil in the air box intake tube. look's like oil is comming out og my throttle body.

i have a 2002 svt with a racing bare long block and stage 3 super charger... my truck is quick and sucks up gas how can i make it faster