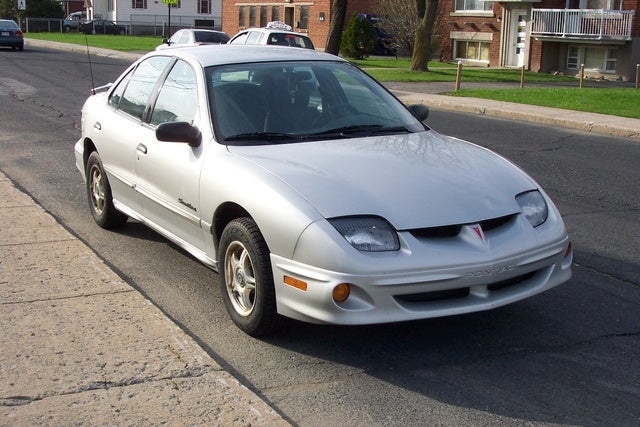 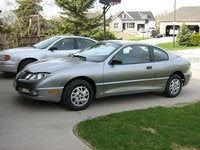 CarGurus has 23 nationwide Sunfire listings and the tools to find you a great deal. 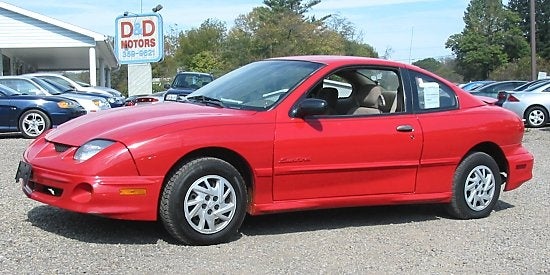 Based on the Chevy Cavalier platform, the compact 2001 Pontiac Sunfire adds sporty styling flourishes, including a new standard rear spoiler, in an effort to appeal to younger, hipper drivers looking for something fun on a budget. The 2001 Sunfire dropped the convertible, and now is only available as a sedan or coupe.

Little has changed this year to the 2001 Sunfire. The SE sedan and coupe is the base model, with a 115-hp, 2.2-liter I4 engine and choice of 4-speed automatic or 5-speed manual transmission. The 3-speed auto tran is no longer offered. Base Sunfires come with dual front airbags, daytime running lights, and ABS brakes. This year, the SE also gets a standard cassette player. A CD player is optional, as are power features, a sunroof, and alloy wheels. The Sunfire does attract Pontiac's youngest consumers, thanks to the sporty GT coupe, which houses a 2.4-liter, DOHC I4 that hits 150-hp. The GT also features foglights, CD player, and a leather-wrapped wheel. Rear seats in the 2001 Sunfire fold down to expand the already spacious 12.4 cubic foot trunk, and a front console holds CDs, cassettes, coins, and drinks. An upgraded Monsoon sound system is offered as an option.

It's Pontiac's least expensive car, which helps make the 2001 Sunfire attractive to first-time buyers or city commuters who don't want to sacrifice style for savings. Drivers like the sporty looks and the GT engine, though they generally wish there was more horsepower. Both the trunk and cabin are roomy, and gas mileage is a decent 21/28 mpg. Owners wish that power windows and locks were standard, and they say the interior materials give away the cheapness of the car. There are problems with the check engine light coming on frequently.

What's your take on the 2001 Pontiac Sunfire?

Have you driven a 2001 Pontiac Sunfire?
Rank This Car

CarGurus has 23 nationwide Sunfire listings and the tools to find you a great deal.

Does the 2001 pontiac sunfire have a mass air flow sensor and if it does where exactly is it located?

How do you remove the plastic cladding from a 2001 Pontiac Sunfire so I can repair rust on the rocker panel itself?

I replaced the water pump on my 2001 Pontiac Sunfire. After doing so I proceeded to put the coolant in the car and it still had a steady stream of coolant coming from below. Not from the pump it's ...

Does a 2001 Pontiac Sunfire Coupe SE have a USB?

Why does my 01 Pontiac sunfire keep blowing the fuse for dash lights and tail lights?You put a new fuse in, turn on the lights and it blows HELP