Average user score
3.8 ⁄ 5 stars
Based on 19 reviews
5 Star; Highly Recommend by Wheeler — 5 Star Quality / Performance / Reliability / Cost of Ownership / Fun 5 Star Overall - A Gem Only two drawbacks: Seat angle is uncomfortablefor long drives, wide turning radius. Still not tired of... Read more
Durability by Kinreal — This is can last for years; the bulit is durable and easy to maintain. The car alerts you when something is wrong. Smail enough to park in tight spots. The moon sunroof allows the sun and fresh air th... Read more
Altima Must Mean Reliable In Japanese by Rob — Have owned the car for almost 100k now, 130k on the Odometer, and have done nothing but general maintenance. Starts every time, great gas mileage, and very comfortable. Read more 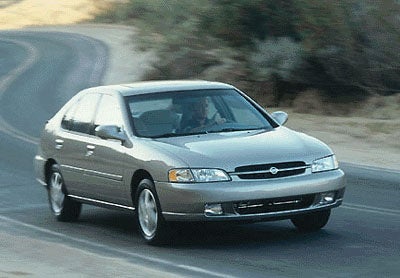 The Nissan Altima, which was redesigned in 1998, saw very few changes for the 1999 model year. The biggest change was the addition of a new trim, the SE Limited, which had a sportier suspension, more luxury features, and special badging.

The 1999 Altima came in five trims: the base XE, the midrange GXE, the sporty SE and SE Limited, and the luxury GLE. The GXE was the most popular model, and the GLE came standard with leather seating and a power driver's seat. All Altimas in the lineup shared a 2.4 liter, 150 horsepower four cylinder engine. Fuel economy is 21/29 mpg.

The Altima is popular because it offers a good value but doesn't feel like an economy car. Drivers praise the 1999 Altima for its reliability and ample trunk space. Some owners find that the styling is a little bland.

Have you driven a 1999 Nissan Altima?
Rank This Car

Battery Dead And Keyfarb Unable To Open Door. Need Advice On How To Get Hoo...

Locked car with keyfarb. Lights left on overnite. Now unable to open doors with key or with remote keyfarb. Can't get hood open either. Any help on how to bypass doors or open hood???? Need to charg...

I had a big crack in radiator. I replaced and also replaced all hoses as well. Replaced coolant and burped system. Now it seems I have another leak on right side of motor chamber. Im thinking its t...

Seat all way back and won't move at all no sound from it and it's elec.

Why Does My Car Keeps Shutting Off?

My nissan altima shuts off when i put it in drive. the battery is good, radio plays fine but the engine keeps jumping. Once i try to put it in drive it shuts off. The year is 1999.

No Power To Fuel Pump

Son rear ended a car and both air bags deployed. Now he has no power to fuel pump. At least it seems like there is no power, unhooked fuel lines and pump,is not pumping.

323 views with 2 answers (last answer about a year ago)