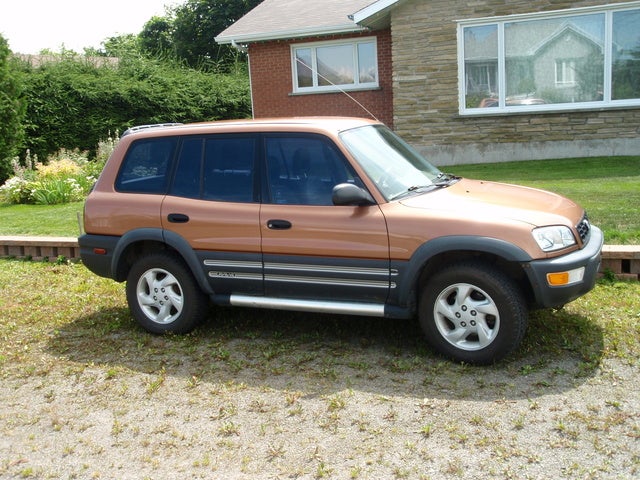 The 1998 Toyota Rav4 was similar to previous models with a few exceptions. First, did you know that there were two model years in which the Rav4 was offered as a soft-top? No, seriously! 1999 and 1998 Rav4's could get their beaches on with their tops off. Not the prettiest models in the world, but cute.

Other than that, minor changes to the grille and front fascia gave the car/truck/SUV a slightly more updated look. The Rav4 was still available as a 2- or 4-door with all wheel drive.

The Rav4 continued its reputation as more of a cute car than a powerful one, with its 4-cylinder engine. The accompanying mileage can make other SUV drivers very jealous: at 22/25 city/highway, the Rav4 can get you from here to there for much less money.

WHSW Overall, an excellent vehicle, especially with the 5spd manual transmission. Even with the 2000cc 4cyl engine, we can scoot along quite well. More like a "slot car" than belies its initial impressions, we have no problems on the highways, even when fully loaded. Just keep up with the maintenance and it will run seemingly forever. The only problem, as with almost all cars, is their integrated or multiuse system (especially in CA) make repairing them yourself a bit more difficult without schooling

would like to find aftermarket hard top to replace soft convertible top?

A Beep Sounds And The Vehicle Is Working Good

How To Remove The Internial Door Handle

how do i remove the internial door handle