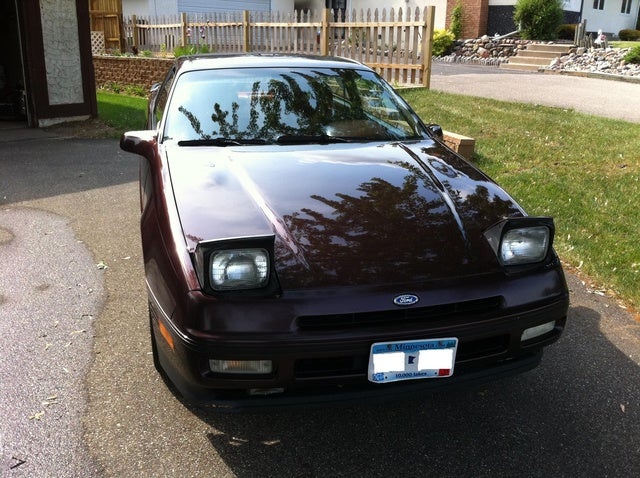 Have you driven a 1989 Ford Probe?
Rank This Car

Could Do With Soft Top By Kenneth

fast on exceleration very quick easy to handle stops on a tanner no repairs has very nice looks an nice interior inside an out this car is fun to drive an cheap to maintain 34 to the gallon cheap se... Read More

Not A Bad Car, Throw In Some Upgrades And It's An Easy Sleeper!! By Tony

This car is very under rated! I was very pleased with the performance aspect, handles like a dream. Mine had some performance upgrades so it was quick, very quick. On days where it was nice out though... Read More

I was looking for a Probe long time ago, and I was about to fall for a 4cyl. Fortunately for me, plans changed I went fof the GT model. So far no heavy breaks, 128k kms and running well. When the e... Read More

Looks Fast And Good By mikedeal

its a low wide easy to drive and handle car its comfy at a persons height of 5'11" and thats pushing it the back seat is not ment for some one over 4'6" pelnty of trunk room easy to mod with tons of m... Read More

Love My Car. By Patricia

i dont like the fact that this car has so many problems atleeast once a month. the car drives goodwhen it wants to but other then that its an okay car for a beginner. i love my car but at the same tim... Read More

Quick little car but not a lot of overall power. It brakes well and handles very well. I havn't done any major repairs yet and there are very minor squeaks which is to be expected for a 17+ year old c... Read More

This car is not to bad, 2.5L V6 KLZE,chipped , full intake, stage 2 clutch, lowered. Hoping to do alot of more work but im tied up on cash at the moment. New paint and racing break rotors for next sum... Read More

Love This Car By ANlprobe

All in all i have owned three probes i am on my third right now and i have to say that overall i love this car. the older styles from 89-94 has to be the best in my opinion. i just wish i was able to ... Read More

Love This Car!!! By Corey

I love this car, very sporty and fun to drive, and smokes hondas like they are standing still with the dohc v6, but it is a gas hog. but runs great for the year. my starter recently went out on me t... Read More

If You Treat It Right, It Will Treat You Right. Great First Car. By Ricky

This car was pretty darn fun to drive, it was decently quick for being naturally aspirated. It handled like it was on rails. It needed some minor fixes here and there but nothing real deeply involve... Read More

Looking for a Used Probe in your area?