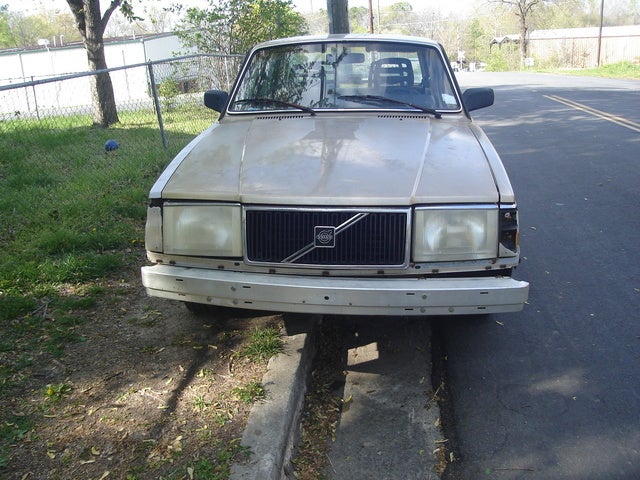 great car for family has plenty of leg room in front and rear seats also plenty of cargo room as it is a wagon and also has cargo rack on top fuel economy even though its a 1992 the fuel range is abo... Read More

Swedish Made Tank By Timo

Loyal servant. Easy and cheap to maintain. From 1990 bodies are galvanized so it's fairly rust free. Fairly safe and fuel economy is decent when considering it's engine size and overall weight. Mine h... Read More

It is an awesome first car. Feels solid and sturdy on the road. Around 25 miles per gallon on gas/petrol. fun in the snow, love the real-wheel drive. Electronics are a bit iffy. I have a dim headlight... Read More

The Car For Anyone That Wants To Tank An Escalade And Turn Tighter Than A Lotus. (at 5mph.) By James

The Mighty Glacier - it's slow and accelerates like a bad Jeremy Clarkson analogy, but sweet God is it sturdy. This thing took out a massive quad-cab super duty pickup truck and only lost a turn signa... Read More

My Volvo 740 5 door AUTO GLE Estate full Leather interior 2.3 engine just had an M.O.T had to repair lower ball joints for this replaced exhaust Great load carrier I am getting about 29 to 33 Mil... Read More

I Love This Car By aamcomerriam

This vehicle is a nice sedan, made when Volvo's were the best. It has over 280k on it. Fairly good fuel economy. Im trying to make it to 500k. Its nice that the average person can use the self diagnos... Read More

A Very Reliable Car And A Pleasure To Drive By Daniel

When i got the car, I had to replace the radiator but was fine when fixed. It had a noisy petrol pump which was eventually fixed. This car was very easy to drive as it was automatic, although a manual... Read More

Car Of The Year, All Years. By slats

Literally the best car anyone could ever own. Mine is almost up to 350,000 miles, still running like a beast. Engine and transmission were built to last forever. I'm currently 19, and never plan on dr... Read More

This was my first car, and I loved it! A Turbo that you could feel and hear that was fitted to a "TANK"! It took to much work to keep it running. Always in the shop. Loved it, but it nickled and dimed... Read More

Pimp (depending On Model, Colour, Spec Etc). By Martyn

Although they have the reputation of being driven by people that qualify to own a free bus pass, the volvo 740 is actually quite a good car. It's an affordable way of owning a lot of luxury (mine had ... Read More