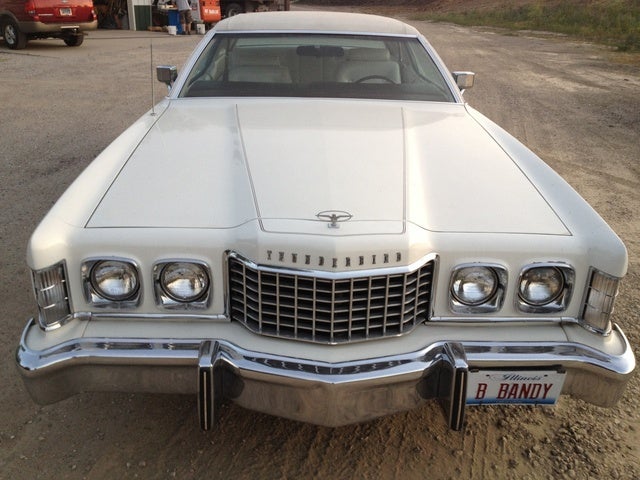 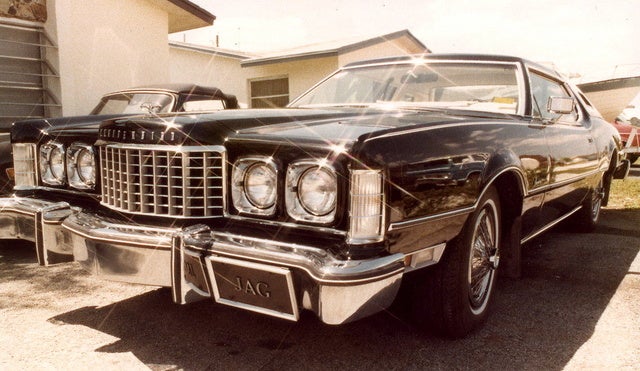 The 1974 Ford Thunderbird suffered, as far as sales went, from the ongoing fuel crisis of the mid-seventies. The 'Big Birds' had been introduced to much fanfare in 1972; their long wheelbase and two-and-a-half-ton curbweight made them look more like a limousine than a sports car. The T-Bird's brand identity had shifted from 'compact performance car' to 'luxury sedan', and the buying public was a little mystified.

When it came to luxury, though, the '74 Thunderbird was a classic of seventies style. Inside the roomy cabin, the decor had a touch of class, with wood-veneer accents and plenty of chrome. It might look charmingly retro today, but at the time, it was the essence of upscale comfort.

Engine-wise, the '74 Ford Thunderbird was still true to its roots as a performance car, shipping off the line with a 460 cubic inch, 7.5 liter Lincoln V8. Of course, you needed a lot of muscle to haul that much sheet metal around the streets! Worst of all in an era of gas shortages, the 1974 Thunderbird had a bottomless thirst at the pumps. Its nightmare mileage of 8 mpg city, 11 mpg highway inspired some drivers to compare it to another 'Big Bird': an albatross.

What's your take on the 1974 Ford Thunderbird?

Have you driven a 1974 Ford Thunderbird?
Rank This Car

My 1974 Ford Thunderbird has been parked in an open door garage since 1980ish. Car hasn't been moved, washed or waxed since then. I started it and it turned right over. Lights, automatic windows, ...

How Much For 74 Front And Back Clip?

Where would I be able to find the build sheet for my 78 Diamond Jubilee. This car is all original right down to belts and hoses with the exception of one belt and one hose and only 52096 miles. so I...

How Much Should I Be Willing To Pay For A 1974 For Thunderbird Convertible ...

how much should i be willing to pay for a 1974 for thunderbird convertible with all of the origional parts and only approx 20k on it. the has red leather seats,painted black and is fully loaded for th...