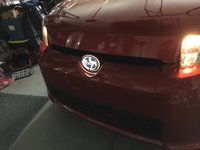 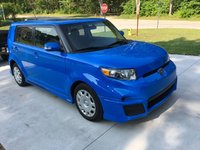 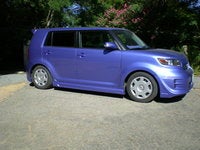 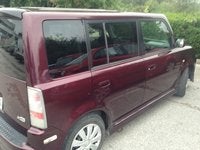 My tires only have 4 lugnuts not 5, but they are 15in tires. From what I can tell the plastic hubcaps I'm interested in don't actually have working lugnuts, just ones that mimic for show. Will it fi...

is it easy for disabled to get in & out of

A/c blows warm for approx. 2.5 miles then blows ice cold. when parked over 5 hours it does the same thing.

Need To Change My Add! Thank You

need to change my add

I have a 06 xB...I have recently put a intake manifold on it and the dash board lite up... Check engine VSC and Trac off all came on at the same time..I did expect that but have tried a few things ...

Choosing to think inside of the box, Toyota introduced its new U.S.-only Scion division with the help of the Scion xB, a boxy, 5-door hatch wagon based on the Japanese bB. Along with the more rounded xA, the Scion xB was rolled out slowly over the course of 2004, with a nationwide release in 2005. The xB was part of Toyota's overall attempt to woo young drivers, and it offered an affordable, roomy car with good fuel economy, no-haggle pricing, and a long list of personalized accessories designed to appeal to the youth market.

The compact hatch is much like the xA. Both were based on a Toyota Echo and Yaris platform. Both have a 1.5-liter, 103-hp I4 engine with choice of 5-speed manual or 4-speed automatic transmission. Both come standard with ABS brakes, traction and stability control, power features, sport seats, and keyless entry. But the Scion xB ended up outselling the xA almost two to one, surprising Toyota, who thought it would be the other way around. Another surprise was its appeal to the over-30 crowd. Perhaps both phenomena were because of a combination of its low price and its cargo versatility. The xB's boxy milk truck shape offers an unbeatable 46 inches of headroom and allows for maximum space utilization (43 cubic feat when rear seats are folded) whether it's for cargo or passengers. Its unique look, with a lower ground clearance and ground effects that the xA did not have, was also appealing.

Drivers can choose from a list of 40 customizable accessories, including performance parts, lighting configurations, satellite radio, a roof rack and other mostly superficial features. In 2006, the xB added an upgraded and much praised sound system with iPod connectivity. These features could be chosen directly at the dealership, reducing the hassle of negotiation or deciding between a variety of bundled packages.

The xB now accounts for 40% of Scion sales. Owners seem to like its agile handling, affordability, high ride height and good visibility, and its overall value. Detractions include somewhat cramped rear legroom, sluggish acceleration with the auto tran, and general lack of power. The all-new 2008 model plans to address some of these issues. The new xB will be longer and wider and feature the more powerful 2.4-liter, 158-hp engine found in the sporty tC. Now standard will be six airbags and cruise control, which was not even offered as an option previously.