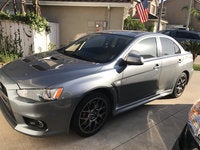 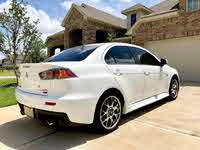 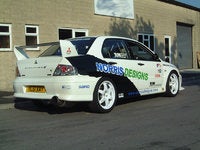 Guys, In Your Opinion, What Do You Think Of The 2010 Mitsubishi Lancer Evo?...

Is The Mitsubishi Lancer Evolution 9 Rwd Or Awd?

what year model engines are compatible to put in my lancer i blew the motor and don't wanna break the bank?

My Evo Is Stock Right Now . . . Need Some Pointers Please 1

alright well everyone that has driven an evo knows how great they are i love to car to death but how can i make it faster ? what parts would be recommended to get ? like gimme the part then a manufact...

Is It Ok To Drive Automatic?

I’m looking to get the 2014 or 2015 MR in a couple months. I don’t drive stick so I didn’t go for the gsr. I’ve heard about some transmission issues people have, but is it due to driving it in auto...

In designing the Lancer Evolution, Mitsubishi has taken its sport-oriented Lancer sedan and kicked its power and exterior styling up a notch to create what is essentially a street-legal racer. The most recent version of the Lancer Evo, as it is known to aficianados, is the 2008 model, designated the Evolution X.

Like previous versions of the Evolution, the 2008 Evo X will be powered by a four-cylinder engine, though the '08 will get a turbocharged version that will produce about 300 horsepower. It also will receive a redesigned four-wheel-drive system, called the Super All-Wheel Control system, or SAWC, and revised exterior styling, with a new grille, headlights, taillights, and rear spoiler, as well as a new interior.

The 2006 version of the Lancer Evolution, which is the most recent existing production car, was powered by a turbocharged 2.0-liter inline four-cylinder engine with variable value timing that pushed horsepower to 286. It was available in three trim packages, including the RS, the IX, and the SE. All three came with a five-speed manual overdrive transmission (which was standard equipment across the Lancer line), as well as air conditioning, Recaro front sport seats, a leather-trimmed steering wheel, and dual front airbags, among other options.