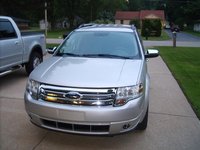 Will outside mirror from 08 Ford F250 fit 08 Ford TaurusX

There Is A Tapping Noise Coming From The Dash Board, Can You Tell Me What I...

At no particular time a tapping noise comes from behind the dashboard, what could be causing it and do I need to have it looked at?

78 views with 3 answers (last answer about a year ago)

The Headlights On My 2008 Ford Taurus X Will Just Come On At Random Times, ...

The headlights on my 2008 Ford Taurus X will come on at random times when the car is not running. Also the electronic door locks will click on and off while driving. Any ideas?

336 views with 2 answers (last answer about a year ago)

Locked My Only Key In Locked In Taurus X 2009

Where Is The Fuel Pressure Regulator

Can anyone tell me if there is a fuel pressure regulator on a 2008 taurus x sel 3.5L and where it is located

44 views with 5 answers (last answer about a year ago)

The Taurus X is part of a revamped lineup from Ford that also includes the return of the standard Ford Taurus as well as the Mercury Sable. In truth, though, the Taurus X is not a new vehicle (nor is the standard Taurus or the Sable, for that matter). It's a revamped Ford Freestyle, a crossover vehicle introduced in 2005.

After seeing disappointing sales for the Freestyle, which was a cross between an SUV and a wagon, Ford considered dropping the vehicle from the lineup. But someone in the company had a better idea. With sales of crossovers on the rise, Ford decided that an old name is more memorable (and easier to sell) than a new one, so the Freestyle received a name change, some significant upgrades, and voila! -- the 2008 Taurus X.

Among the upgrades for the Taurus X is a new 3.5-liter V6 engine that produces 260 horsepower, up 57 horsepower from the previous year's Freestyle. Other features for the new Taurus X include standard AdvanceTrac traction control system, a Safety Canopy System, and an available Ford SYNC System.

The Taurus X is available as either a front-wheel-drive vehicle or with a new four-wheel-drive system. The seven-passenger vehicle has three rows of seats and an available power rear liftgate. A new Eddie Bauer Edition also is available.