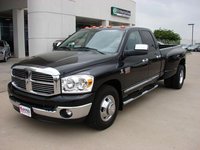 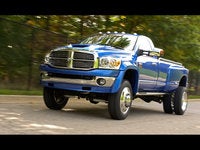 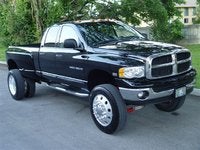 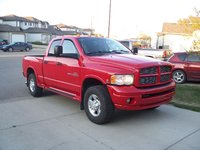 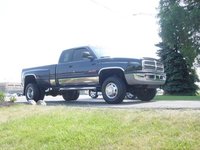 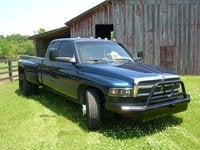 How To Start Or Fix Problems

2005 dodge 3500 5.8 diesel will crank but no start . Batteries were removed while running and died . Cluster gauges don't work the fuel pump not working. All lights on cluster work as well as the ...

While driving down the interstate my dodge ram 2003 died no noise no smell no warning the first time it cranked right back up and I made it home. Over the course of two days it got worse happening ...

In 1994, the Dodge Ram 3500 came in one standard cab size with a choice of a 6.5-foot bed or an 8-foot bed. The two-door pickup was available with rear-wheel or 4-wheel drive, and was powered by either a 5.9 V8, a 5.9 turbodiesel, or the more powerful 8.0 V10. Dodge claimed all the Ram pickups had the most cabin space and best towing power of the full-size pickup class. Unlike the other two Rams, the 3500 was offered with either single or dual rear wheels. Over the years, trim names change somewhat, but basically came in a base (now the ST), power-equipped SLT, or the luxurious Laramie, which was more oriented towards ride comfort in terms of offering leather seats, a power driver's seat, and dual-zone climate control.

A Club Cab arrived in 1995, with a rear bench seat that could be folded up for more cargo room. A year later, the first full-size four-door pickup was introduced with the Quad Cab, featuring wide-swinging rear-hinged doors for easy access. While the Ram pickup was the first in its segment to offer standard 4-wheel ABS brakes, the 3500 comes only with rear-wheel ABS. Side curtain airbags, also an industry, first, are optional.

Over the year, the Ram 3500 received updates to its suspension, and lost the V10 engine. A Hemi V8 appeared in 2003, along with a major overhaul to the Ram lineup to make it more competitive and regain its once-dominant status in the market. The other engine option was the 5.9 turbodiesel, which had slowly gained horsepower ratings to reach a maximum of 325 in 2006. In 2007, this diesel engine is replaced by a 350-hp 6.7 liter turbodiesel I6 and a new 6-speed automatic transmission. A Mega Cab version of the Ram 3500 arrived in 2006, with a focus on passenger comfort. Available only with the short bed, it devotes space to a segment-leading 44.2 inches of front and rear legroom, with rear seats that recline and fold flat. With the Mega, Dodge has clearly begun marketing consumers wanting a combination of a powerful workhorse with a comfortable family car.

The Ram lineup has led the full-size pickup market for most of its life, though renewed competition from the Titan and the upcoming Tundra is probably what incited the new 6.7 turbo engine. Its towing power always gets ranked high, and with top-rated safety features and a spacious cabin, many owners find the Dodge Ram 3500 equally versatile as a family hauler.