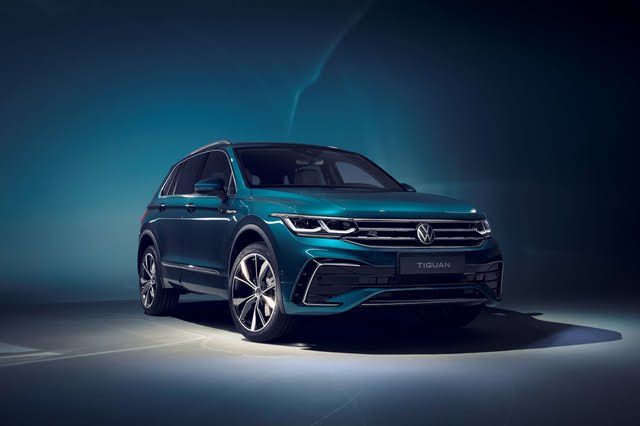 Since arriving in the United States in 2009, the Volkswagen Tiguan has progressed from a quirky European option in a field of crossovers dominated by American and Japanese brands to a genuine competitor and one of the most compelling compact crossovers on sale today. Europe receives an updated Tiguan for the 2021 model year, while the new compact crossover will come to America as a 2022 model.

The delayed arrival of Volkswagen's latest and greatest is nothing new. The American market typically receives Volkswagen updates a year after they debut in Europe. As such, the latest generation Tiguan came to the United States during the 2018 model year and has remained relatively unchanged since then. 2022 won't necessarily bring a next-generation Tiguan, but plenty of updates and improvements abound for this little SUV.

First up is the Tiguan's new styling. Older VW Tiguans carried a lot of the Golf compact hatchback's character in their design, but the newer style dropped some of that cuteness when it adopted a much longer wheelbase. The US market lost the first-generation Tiguan's Euro styling when it was last updated. We've had a first look at the new compact SUV, and the mass-market American looks continue with the latest redesign. A new front bumper joins a refreshed, wider radiator grille. That grille is flanked on either side by standard LED headlights, and a sporty R-Line exterior design package will be available. On either side, you'll find new wheel designs ranging from 17 to 20 inches in diameter. Colors, naturally, include an array of black, white, gray, and silver, but Stone Blue, Atlantic Blue, and Kings Red are here to brighten things up.

On the rear, Volkswagen has repositioned the Tiguan badge, spelling it out in widely spaced lettering across the center of the car, just below the VW logo. Like the headlights, the taillights are now standard LEDs.

Inside, bright and shiny screens will likely take center stage. Volkswagen's version of Audi's brilliant Digital Cockpit graces every Tiguan. An 8-inch Digital Cockpit comes standard behind the steering wheel, and a 10-inch display is optional. Between the front seats, Volkswagen will include the latest generation of its modular MIB3 infotainment system; the lowest-trim Tiguans will receive a 6.5-inch unit while the top three trim levels include an 8-inch screen. Wireless App-Connect is included, the steering wheel features touch controls for the infotainment, 15 colors of ambient lighting are available, and shoppers can also upgrade to a 480-watt Fender premium audio system.

Volkswagen has announced only the existing 2.0-liter turbo 4-cylinder engine, but there have been rumors that it may replace or supplement the existing inline-4 with something either larger or more powerful, likely to appease American shoppers who want more than the existing engine's 181 horsepower and 221 pound-feet of torque. A plug-in hybrid option would certainly help the Tiguan compete with a growing crop of electrified crossovers like the Toyota RAV4 Prime. For now, however, put your hopes on hold for a Tiguan R or a TDI Tiguan. Fuel economy expectations haven't been announced, but the EPA rates the existing engine at 22 mpg city, 29 highway, 25 combined when paired with a front-wheel-drive (FWD) powertrain, and 20/27/23 when working with VW's 4Motion all-wheel drive (AWD).

The Volkswagen Tiguan will be available in four trim levels: S, SE, SE R-Line Black, and SEL R-Line. The latter two will offer an optional third row of seating. The base-level S trim offers 17-inch wheels and heated front seats. The SE upgrades to 18-inch wheels and adds a power tailgate, touchscreen climate controls, and an array of safety features including adaptive cruise control and lane-keeping assist. The SE R-Line Black pumps up the style with 19-inch wheels, special bumpers and side sills, black roof rails, and an R-Line sport steering wheel. Finally, expect 20-inch wheels, the 10-inch Digital Cockpit, and the adaptive interior lighting, and road-sign recognition on the top-of-the-line SEL R-Line.

The Tiguan has always been a refined and interesting option in a very crowded segment. Comparatively high prices have hindered its sales in the past, but the new 2022 redesign looks to be more than a light facelift. This new Tiguan may be able to flood Volkswagen showrooms with eager customers when it arrives in the fall of 2021.

What's your take on the 2022 Volkswagen Tiguan?

Have you driven a 2022 Volkswagen Tiguan?
Rank This Car