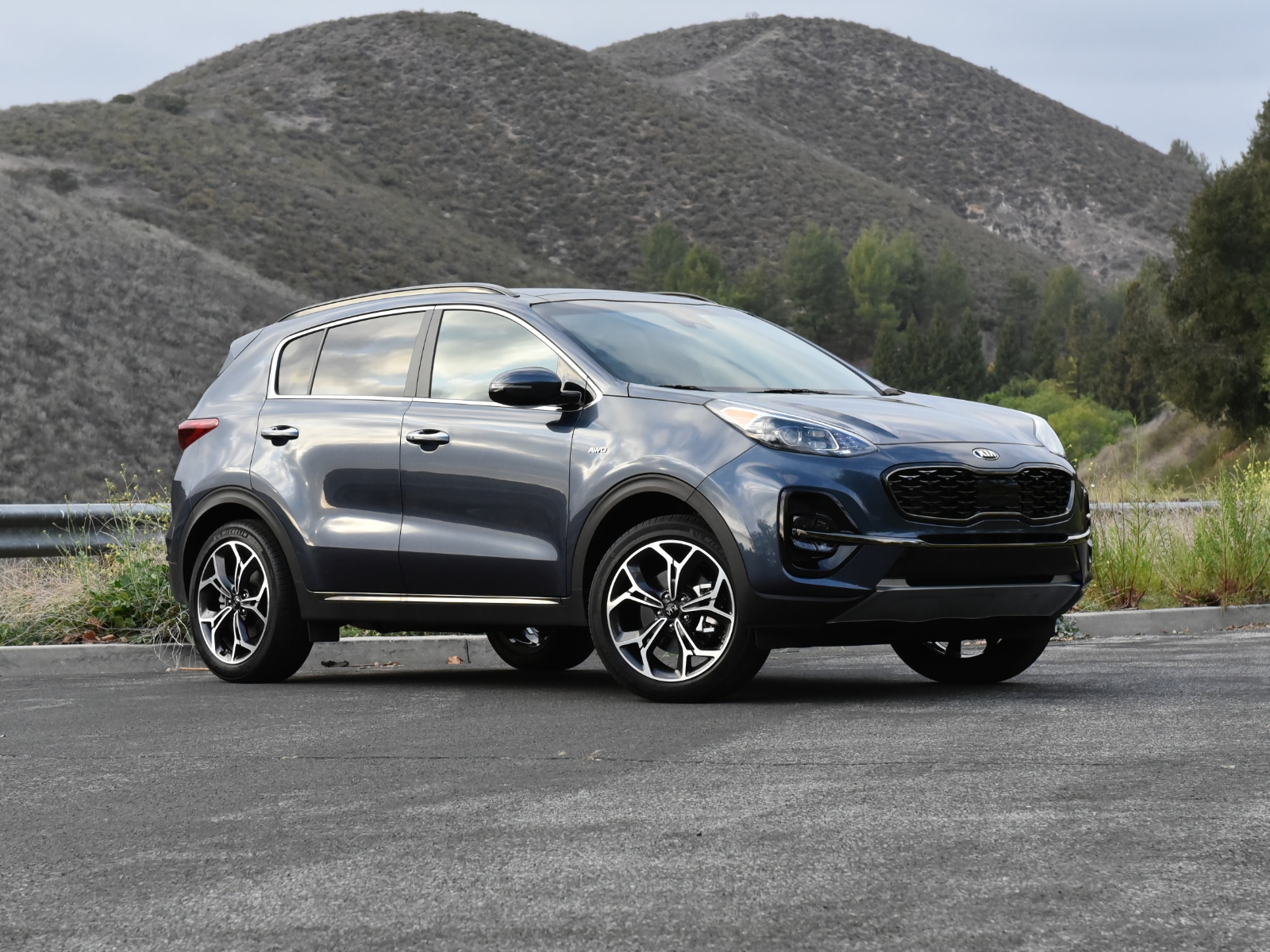 Looking for a New Kia Sportage in your area?

Kia sells five crossovers, and the 2022 Sportage is the middle child in a diverse lineup. 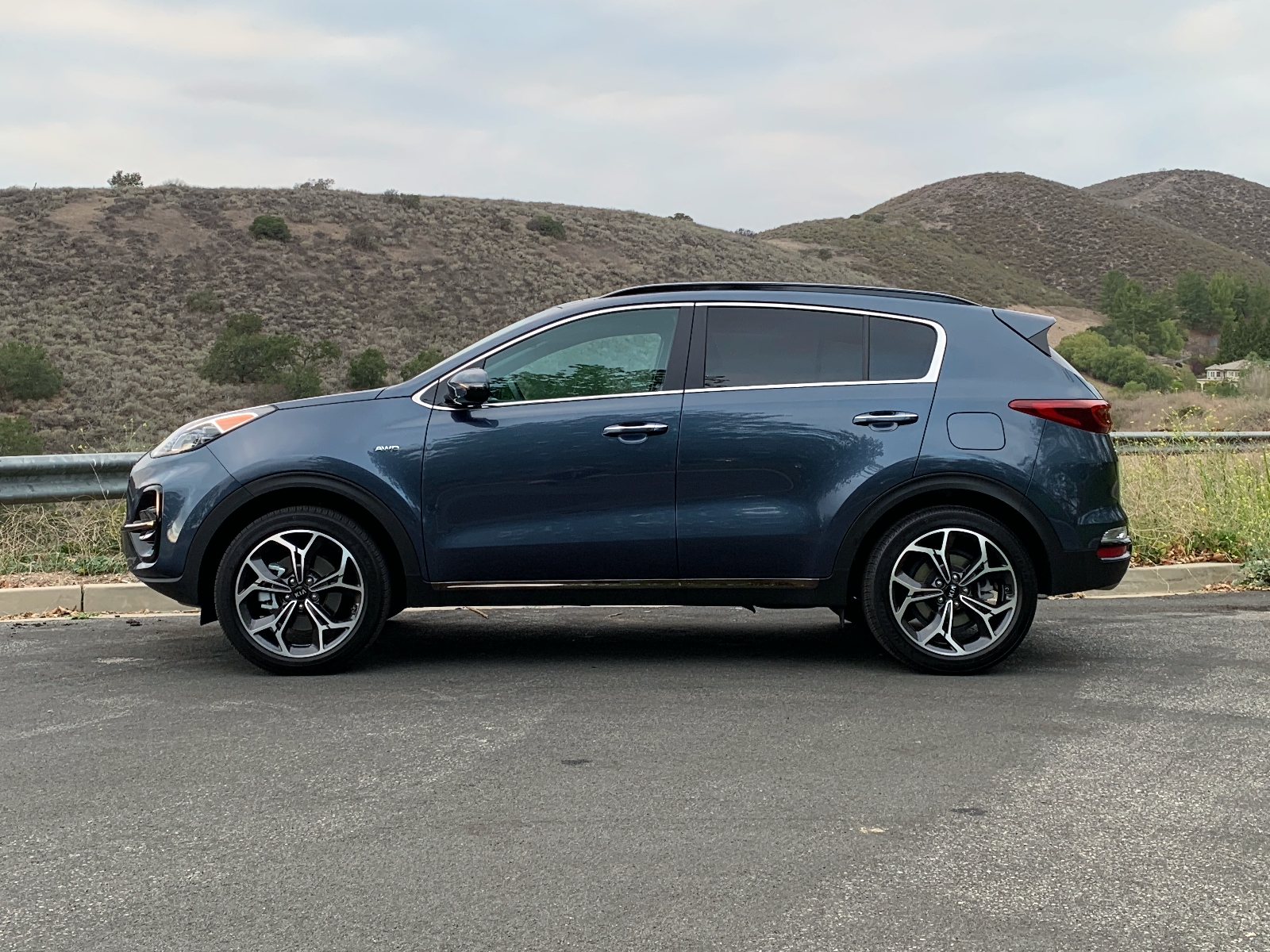 The 2022 Kia Sportage is a stylish, sophisticated, safe, and–with its available turbocharged engine–speedy SUV. Kia hasn't redesigned it since 2017, but that doesn't mean you should cross it off of your shopping list. Even the technology is up-to-date. 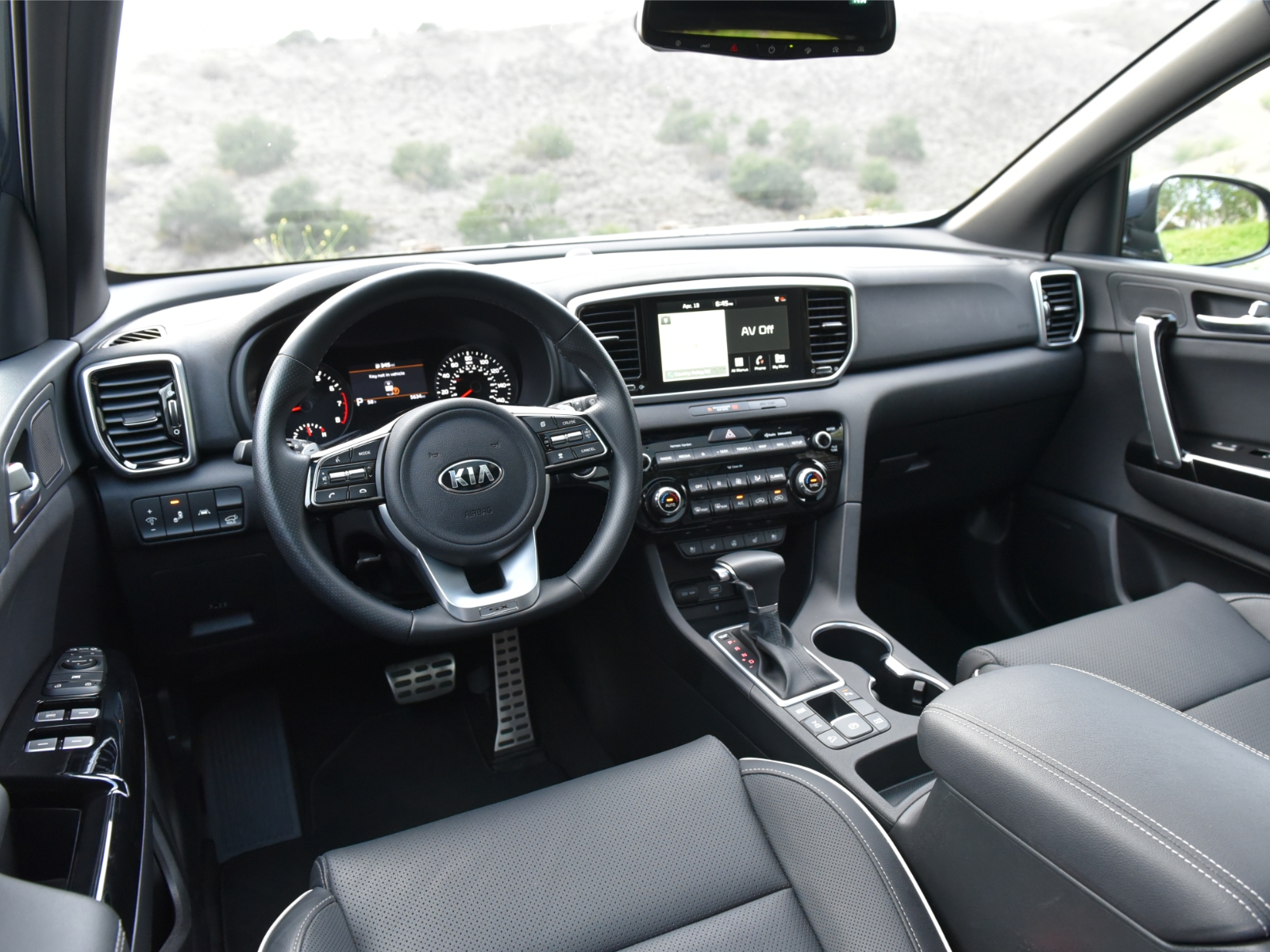 Kia's tiger-nose grille styling worked well on most of the company's new cars, like the Stinger and the Sorento, but perhaps not the Sportage. Affixed to the SUV's front end under oversized headlights and over a chrome grin of trim stretching between the bumper's squared-off cheeks, the grille looks like one of those fake mustaches you wear at a Halloween party. Except it's plastered to the front of the Sportage instead.

This is unfortunate because Kia gets every other design detail right. From the four-dot running light signature that recalls the Porsche Macan to the Volkswagen-style symmetry of the back door shut line and rear fascia seam, this Kia exudes style. And with each of the SX Turbo's great-looking 19-inch wheels pushed out to the corners, it's got proper proportions and a planted stance.

Buttons and knobs rule, making it easy to adjust the stereo, change the cabin temperature, and access the infotainment system's main menus. Every Sportage looks and feels upscale, and every time you drive the SUV, the transmission shifter's solid and fluid operation will impart a sense of quality. 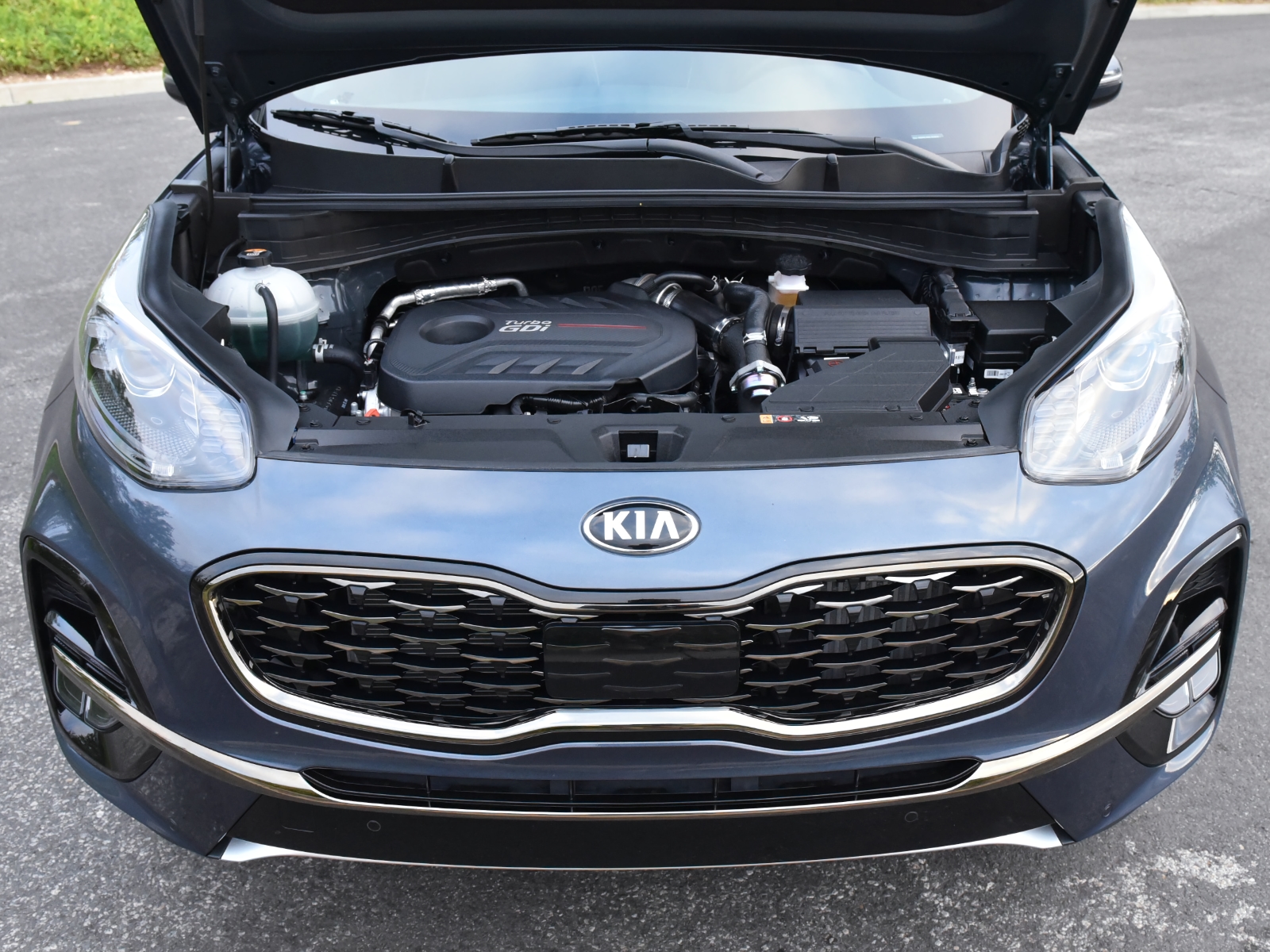 Most Sportages have a 2.4-liter four-cylinder engine making 181 horsepower and 175 lb-ft of torque. It forms part of a powertrain that's competitive but unremarkable.

The Sportage SX Turbo equips the SUV with a robust 240 hp (237 hp with AWD) and 260 lb-ft of torque. This amount is plenty for a compact crossover and is especially beneficial to people who live at elevation in places like Denver.

Both engines use a six-speed automatic transmission to deliver the power to the front wheels. Kia's variable distribution Dynamax all-wheel-drive system is an option and includes a locking center differential to equally split power to the front and rear wheels at low speeds.

With the Sportage SX Turbo, acceleration is quick. However, the maximum torque arrives at a low 1,450 rpm and remains available only until 3,500 rpm. The sudden surge of torque can take a driver by surprise, feeling as though a magical little gnome living under the hood has flipped a power on/off switch. And when you switch into Sport mode, the SUV adopts an almost frenetic personality, eager to blast off down the road the moment you drop the hammer.

The ride is unexpectedly smooth and compliant, not unlike how the larger Kia Telluride feels as it glides over imperfect pavement. There is a hint of body roll and some lateral rocking over pavement undulations, but nothing excessive. The suspension tuning lends the Sportage a sophisticated driving character.

Toss this SUV into some turns, and it feels athletic and sporty up to a point. And that point comes sooner than later. The steering could be quicker and feel sharper, and the tires could offer a higher threshold before the howling starts. Hit a sharp bump or crack in the road, and you can feel the impact reverberating up through the aging architecture.

Most people will find the Sportage SX great fun to drive, though it's not quite as refined as a Mazda CX-5 Turbo, which is its most natural competitor. 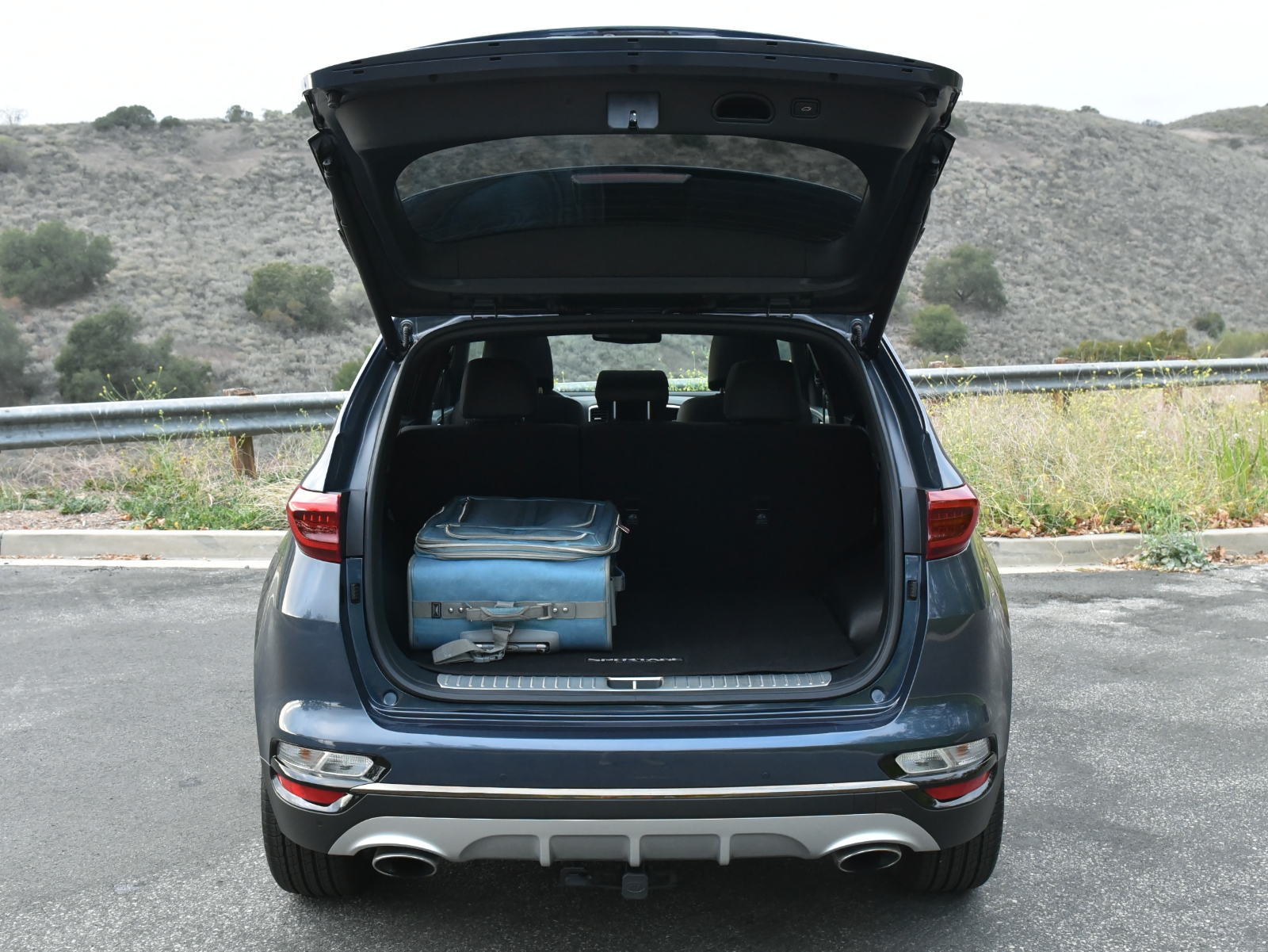 Though the 2022 Kia Sportage lands on the smaller side of the compact crossover SUV scale, the passenger compartment is remarkably roomy.

Comfort is easy to come by, especially with SX Turbo trim. Front-seat occupants enjoy perforated leather upholstery with classy contrast stitching and piping. The driver's seat offers ten-way power adjustment, while the front passenger gets a rare-for-the-class eight-way power adjustment. The SX Turbo's front seats are heated and ventilated, and a heated flat-bottom steering wheel is standard for this version of the SUV.

Feel free to dole out rear seat assignments to adults. Legroom is generous, the seat itself is pretty comfortable, and Kia supplies both air conditioning vents and a USB charging port for rear passengers. Just tell them to be careful when yanking open the back doors, which are the widest right at the top of the frame. It's easy to almost smack yourself in the face.

Interior storage space is generous, but maximum cargo volume is not. Fold the second-row seats down, and the Sportage can accept 60.1 cubic feet of cargo, falling well short of segment leaders like the Honda CR-V and Toyota RAV4. The 30.7 cubic feet behind the back seat is acceptable, easily enough to take four full-sized suitcases and more.

Note that the Sportage offers Kia's smart liftgate technology. It's a hands-free feature, but it doesn't require you to wave a foot under the bumper, which can be dangerous in slippery conditions. Instead, you simply need to stand near the back of the Sportage for a few seconds, and it will open. This feature is great when you want the functionality but is not great when you don't. If you'd rather not use it, you can turn it off. 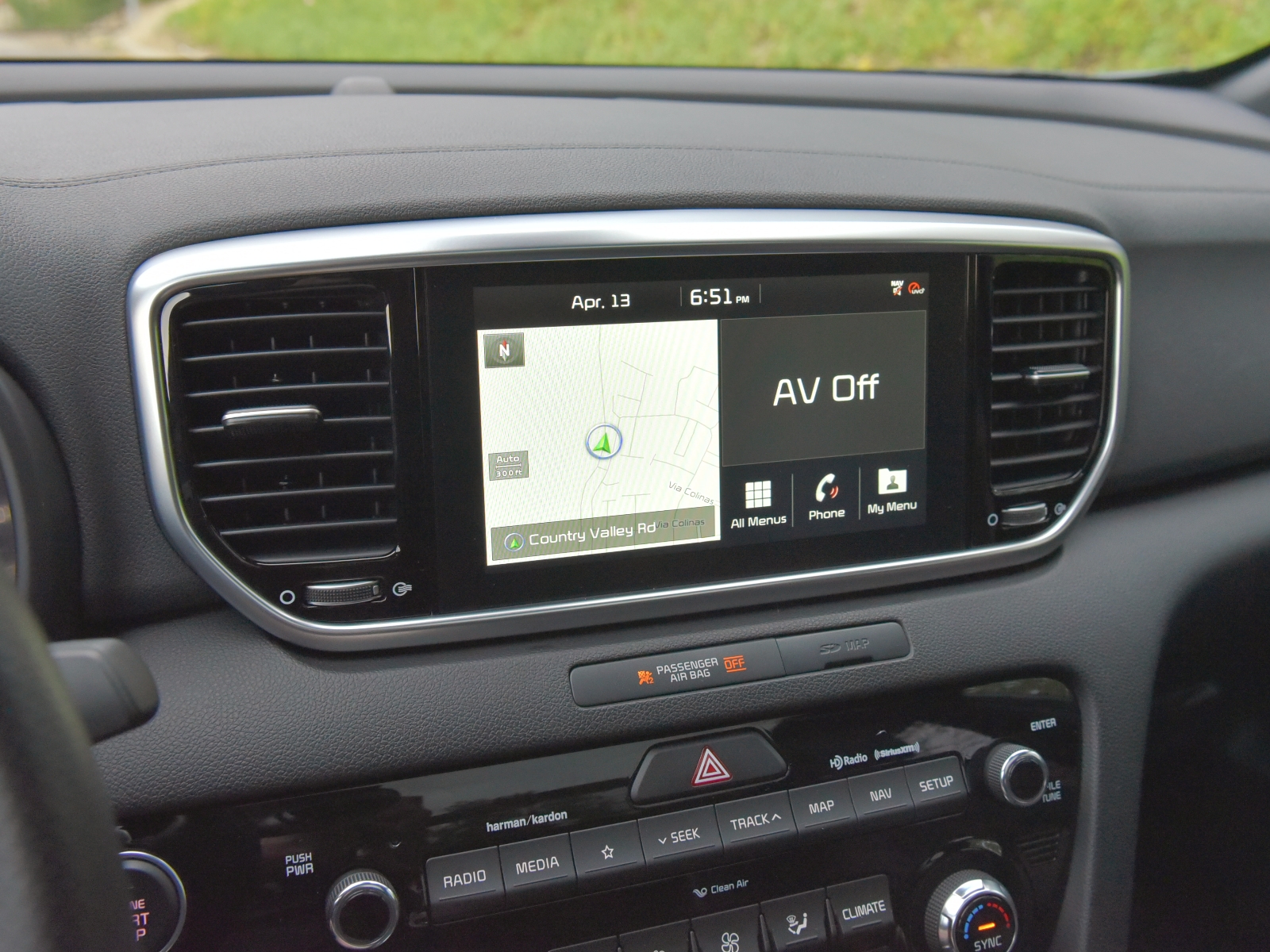 Overall, the infotainment system is easy to use. Knobs control stereo volume and radio tuning, and it's easy to scroll through station pre-sets using the steering wheel controls. The onscreen menus offer a logical user experience, and you can find and adjust the SUV's various features and functions without cracking open the owner's manual.

However, the UVO Link system is falling behind in terms of technological sophistication. An 8-inch screen is increasingly small in the grand scheme of things, there isn't a WiFi hotspot, the voice-recognition technology is hit-and-miss in terms of its effectiveness, and the smartphone mirroring is wired instead of wireless. Nevertheless, what Kia does provide is simple and easy to use. 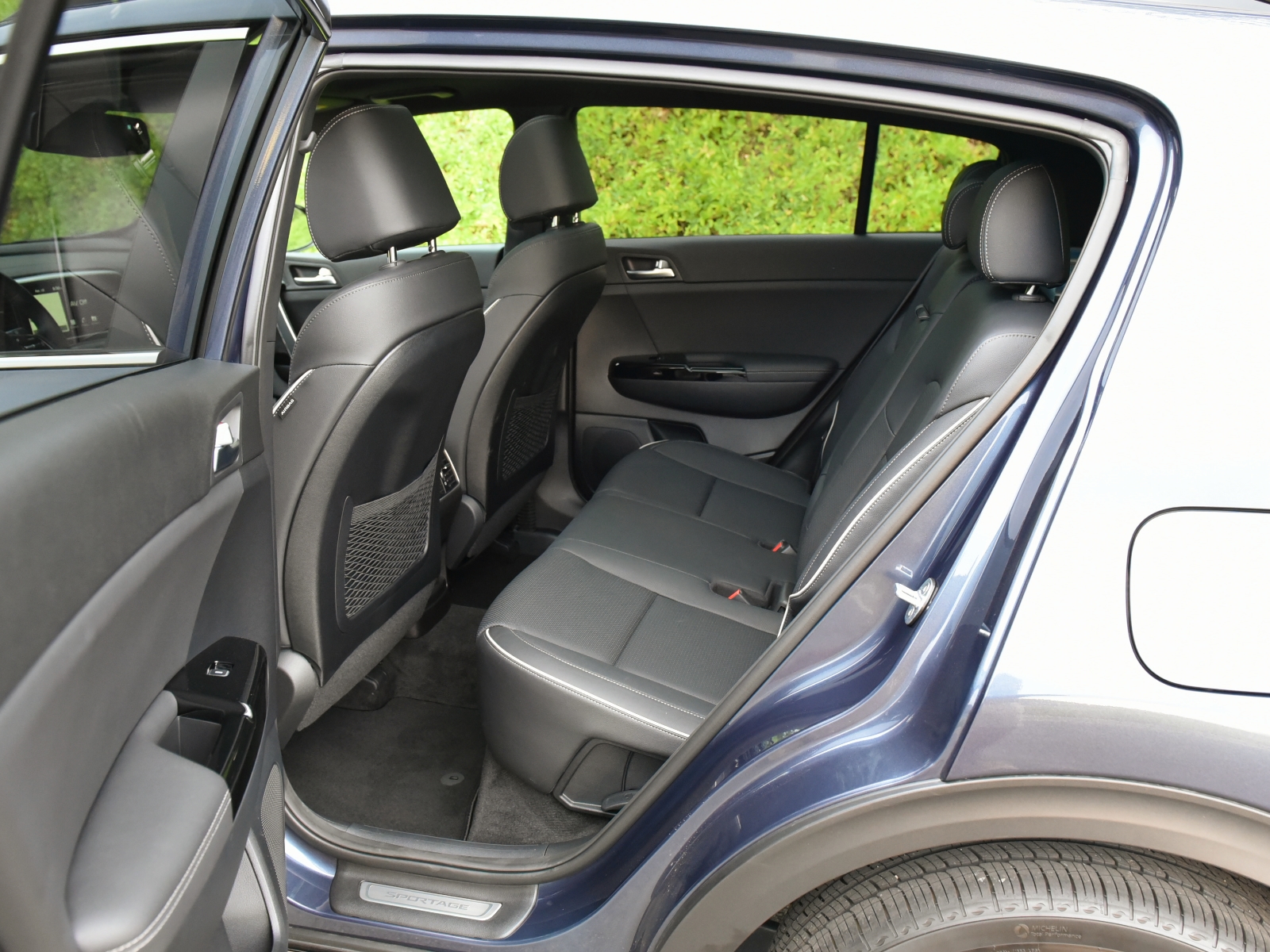 No matter which trim level you choose, the 2022 Sportage has forward-collision warning with pedestrian detection, automatic emergency braking, lane-departure warning, lane-keeping assistance, automatic high-beam headlights, and a driver monitoring system. To get a blind-spot warning system with rear cross-traffic warning, you need the LX Value Edition Package or any version of the Sportage except the base LX.

Our SX Turbo test vehicle had all of these features, plus adaptive cruise control with stop-and-go capability. The technology is effective, and the lane-keeping assistance is both a blessing and a curse. It is quite effective when you need it and quite irritating when you don't. We preferred driving the Sportage with it turned off.

According to crash-test ratings from the National Highway Traffic Safety Administration (NHTSA) and the Insurance Institute for Highway Safety (IIHS), the Kia Sportage is a safe SUV. However, only the SX Turbo earns an Acceptable headlight rating, which puts it over the line for an IIHS Top Safety Pick laurel. 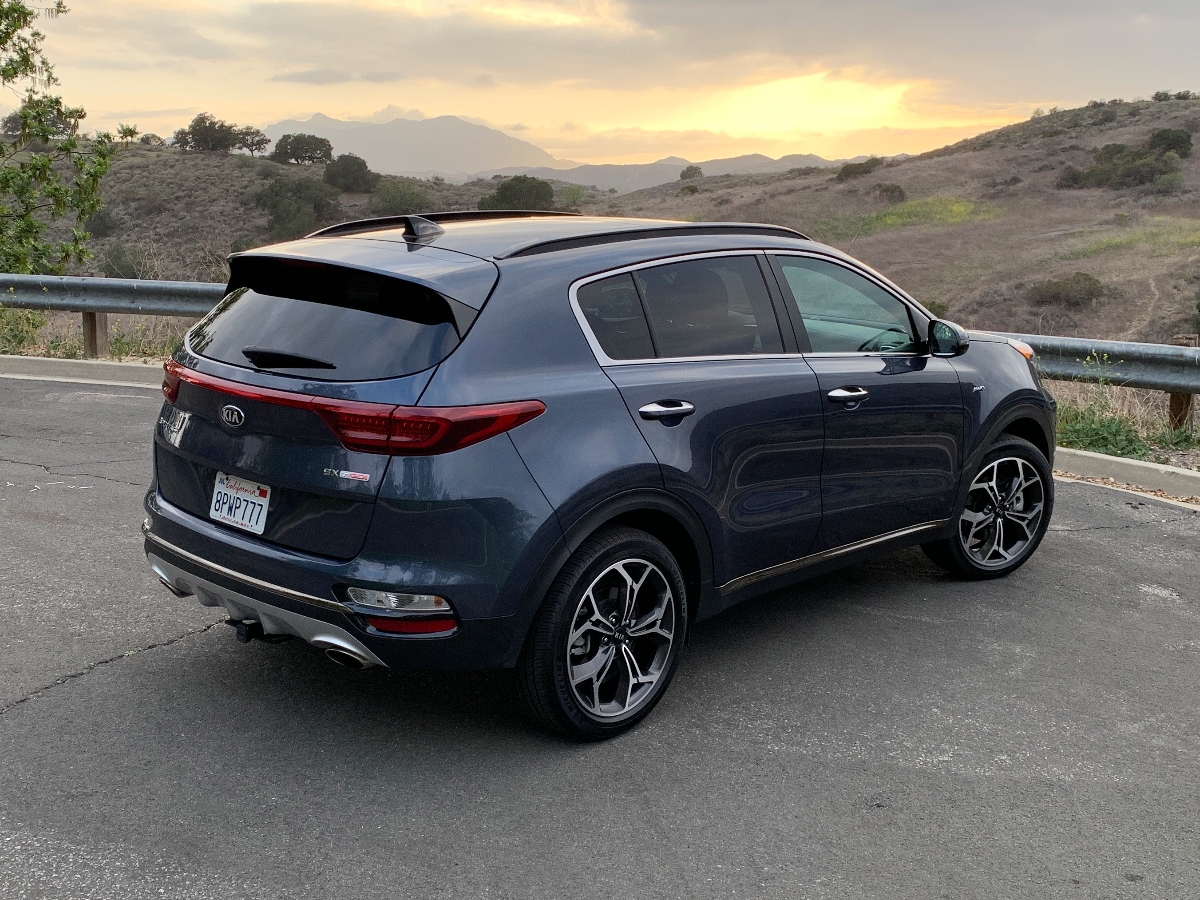 Thanks to its new LX Value Edition Package, and its industry-leading warranty coverage, and the SX Turbo's rip-snortin' performance, the 2022 Kia Sportage delivers value.

However, it cannot match the cost-effectiveness demonstrated by its corporate sibling within the Hyundai Motor Group family: the redesigned 2022 Hyundai Tucson.

No doubt, the Tucson is a preview of what is almost certainly coming in the form of a redesigned 2023 Kia Sportage. No doubt your local Kia dealer will be eager to strike a bargain on a new 2022 Sportage before the new Sportage arrives.

And that, compact crossover SUV buyers, can only sweeten this particular pot.

Bob Given how ugly the 2023 Sportage looks and its lack of the 2.0T petrol engine, I would get a 2022 SX Turbo for a screaming deal and never look back

Have you driven a 2022 Kia Sportage?
Rank This Car

Enter your zip to see incentives for a new Sportage in your area.