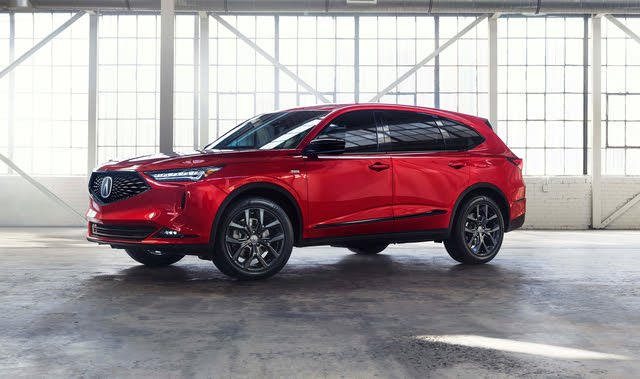 Acura’s flagship SUV, the MDX, is returning for the 2022 model year after taking a one-year sabbatical from the automaker’s lineup. The fourth-generation MDX will draw much of its technology, style, and performance influence from the MDX Prototype that Acura unveiled in late 2020.

The current vehicle, which debuted in 2014, has evolved over the years into a sharply styled premium family vehicle with sporting aspirations. Acura has only shared silhouettes and glimpses of the actual 2022 model, but a look to the prototype shows a vehicle that has grown into its style with clean lines outside and a sophisticated, tech-forward cabin.

The 2022 MDX will ride on a new light-truck platform that incorporates double-wishbone front suspension, which is a first for the MDX. That move will give the new vehicle better handling, responsiveness, and control. If the prototype’s dimensions make their way into the production model unchanged, that improved suspension setup will combine with a lower and wider body to give the MDX an engaging ride and driving experience.

The situation under the hood won’t change as drastically for the new generation, but that’s not a bad thing. The 2022 MDX will continue to be powered by Acura’s venerable 3.5-liter V6 engine, but power will be delivered through a 10-speed automatic transmission, up a gear from 2020’s nine-speed. Output numbers for the engine have not yet been made available, but the current model’s 3.5-liter produces 290 horsepower.

Pushing the MDX’s sport-forward attitude into the next generation, Acura will release a Type S model in late 2021, which will follow the TLX Type S to become its first high-performance SUV. That model will get the TLX Type S’ turbocharged 3.0-liter V6 that makes 355 horsepower and 354 pound-feet of torque. It’s unclear whether the Type S will replace the Sport Hybrid model currently in the MDX lineup, or if it will become an additional, range-topping trim.

Super Handling All-Wheel Drive will continue on in the new vehicle and will remain the only torque-vectoring system in the MDX’s class. The technology is capable of shifting power between the front and rear wheels, and in between individual wheels on each axle, to deliver traction where it’s needed most. That’s not only great for inclement weather, it seriously increases grip on curvy roads and during spirited driving.

Inside, the new MDX will offer premium materials, such as real woods and leathers, and it will still bring three rows of seating to the table. A new infotainment system is expected, with a large screen sitting atop the center stack to replace the previous model’s dual-touchscreen setup. A new digital gauge cluster is also expected, which will replace the traditional speedometer-tachometer setup with a fully configurable driver display.

The Acura MDX is the best-selling three-row luxury SUV, and the 2022 model is a compelling step in the vehicle’s evolution. The addition of a Type S model will put the MDX toe-to-toe with big-name rivals from Europe, but the Acura has a leg up on price.

Have you driven a 2022 Acura MDX?
Rank This Car