Looking for a Used Atlas in your area?

Volkswagen’s entry into a crowded and competitive segment fails to stand out. 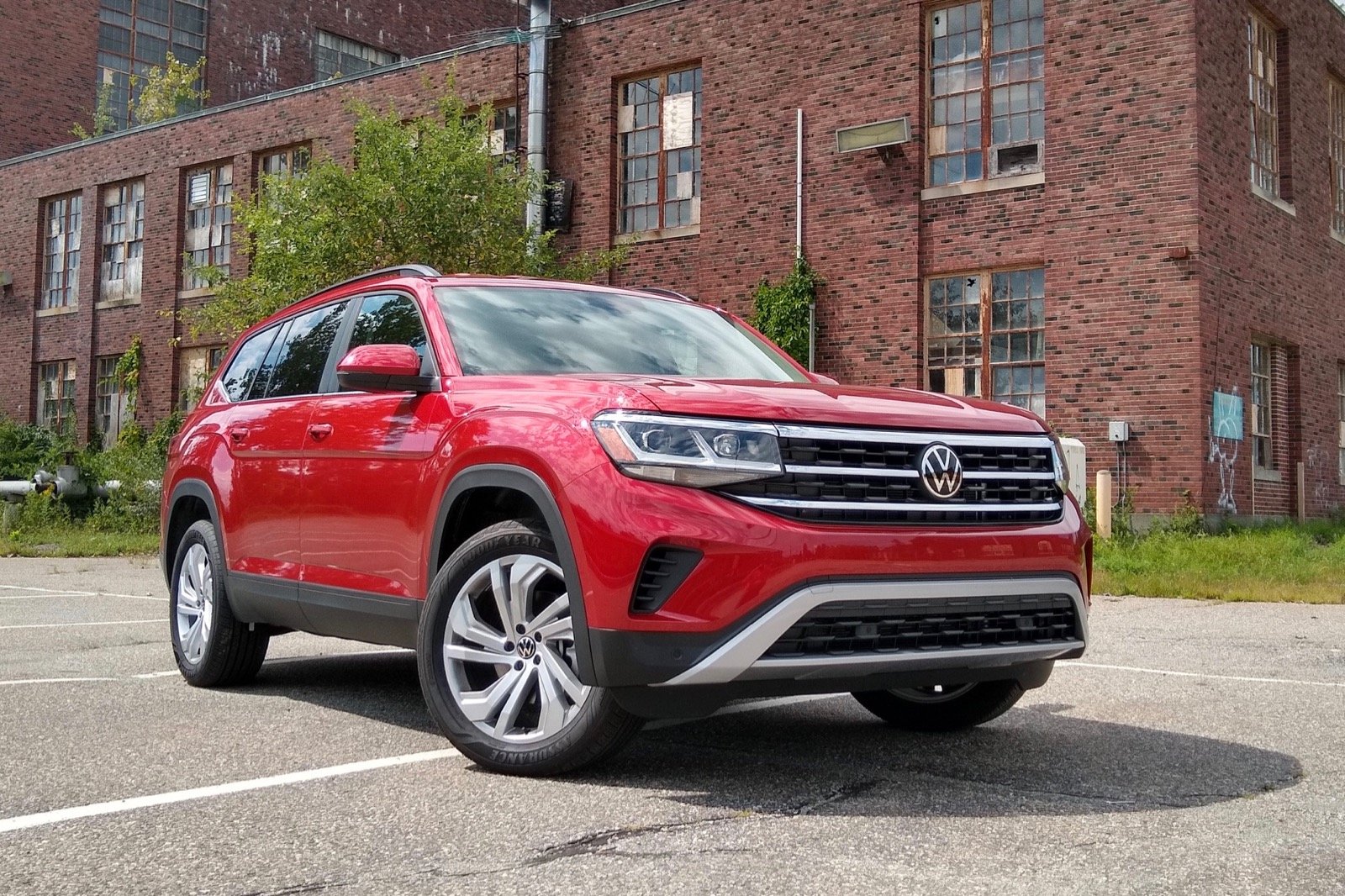 Introduced for the 2018 model year, the Atlas is Volkswagen's latest attempt to win over American buyers. Built in Chattanooga, Tennessee, the VW Atlas competes in the three-row crossover SUV segment against well-established nameplates like the Ford Explorer, Honda Pilot, and Toyota Highlander. Changes for 2021 are limited to exterior styling tweaks and a reshuffled option list. VW also offers the two-row Atlas Cross Sport. 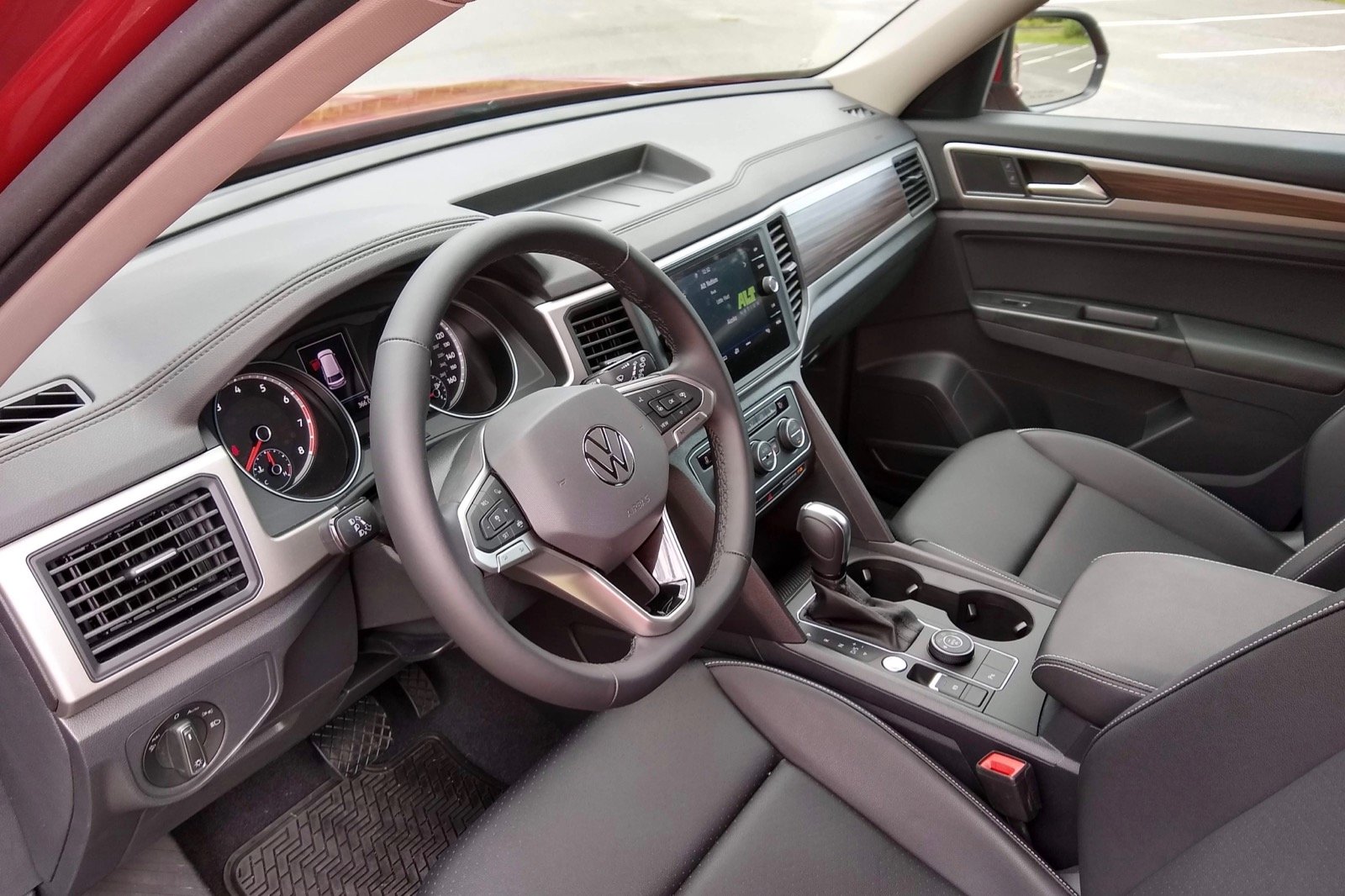 The Atlas SUV gets a styling refresh for the 2021 model year, including new front and rear bumpers, standard LED headlights and taillights with new designs, and a new grille shared with the two-row Atlas Cross Sport model. The changes add 2.4 inches to the length of the Atlas, according to Volkswagen.

Overall, the 2021 Atlas has a more extroverted look than the conservatively-styled 2020 model, although the fake chrome exhaust tips on the new version are a bit cheesy. An R-Line trim package adds sportier-looking front and rear bumpers, as well as side skirts. VW also quotes a drag coefficient of 0.34, which isn’t really something to brag about, but it's likely the best that can be expected from a boxy, high-riding utility vehicle.

Changes are purely cosmetic, so the Atlas still rides on the same MQB platform as before. MQB is used by most current VW models, including the Jetta and Golf. That MQB works for those compact cars and the much larger Atlas is a testament to its flexibility.

As with its other recent models, VW took a minimalist approach to the Atlas’ interior. It’s largely free of decorative trim pieces, and controls are sensibly laid out. The standard seating configuration is seven seats across three rows, with a three-seat 60/40 split-folding second-row bench and two-seat 50/50 split-folding third-row bench. Second-row captain’s chairs are available on the SE with Technology trim level and above. Cloth seats are standard on the base S trim level and SE and SEL models get simulated leather. Only the top SEL Premium trim level gets real leather upholstery.

While the overall design was pleasing and functional, material quality on our mid-level SE with Technology test car was below average. Plastics felt cheap and tinny, and VW made no attempt to hide the fact that the simulated wood and metal trim weren’t the genuine articles. Unless there’s a forest full of plastic trees out there somewhere, that is. 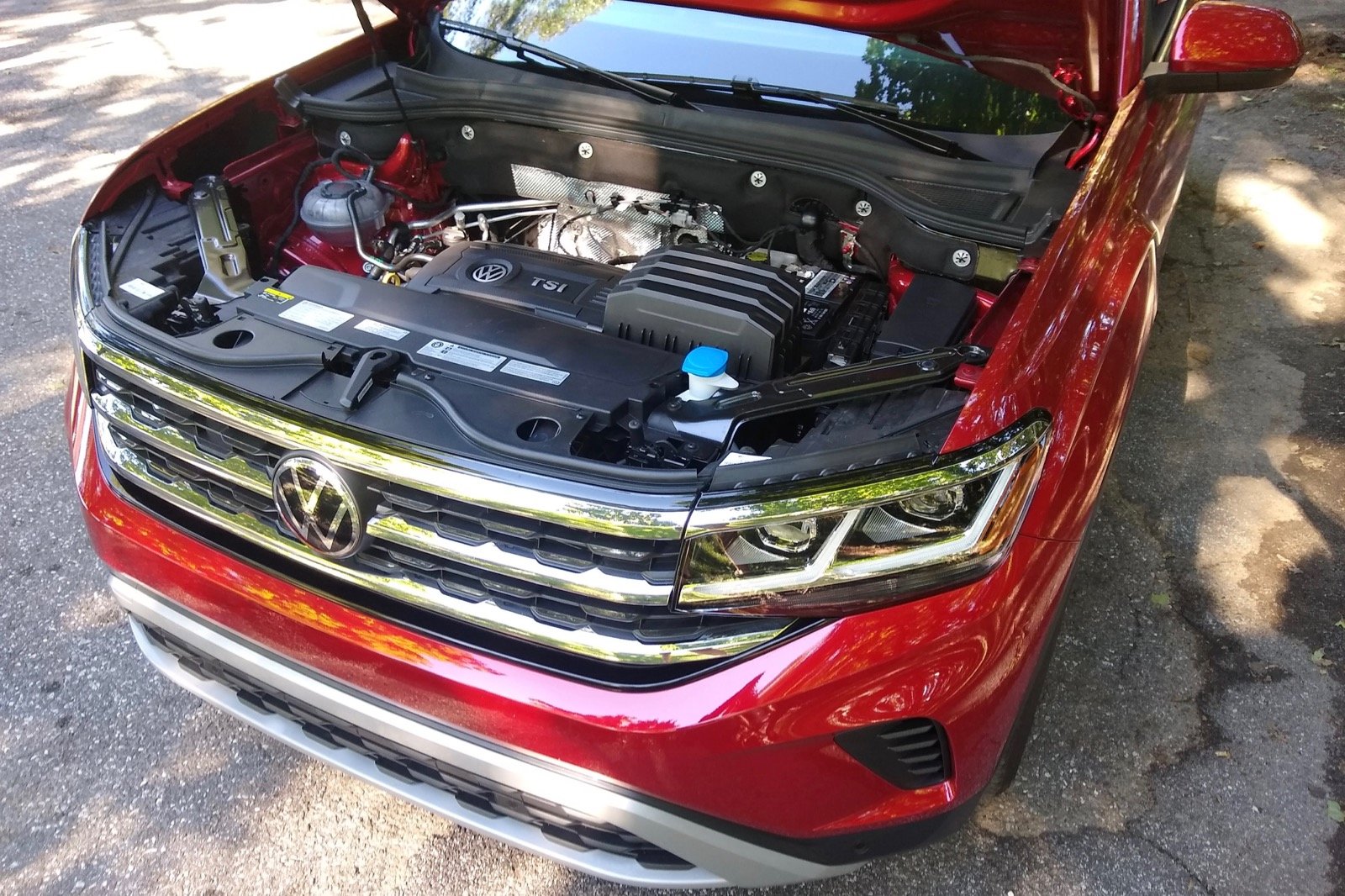 Volkswagen offers two engine options in the 2021 Atlas. The standard 2.0-liter turbocharged inline-four is from the EA888 family used in most of VW’s other current models. In the Atlas, it produces 235 horsepower and 258 pound-feet of torque on premium fuel.

A 3.6-liter VR6, rated at 276 hp and 266 lb-ft, is available on SE with Technology and higher trim levels. Unique to VW, the VR6 is a V6 engine with a very narrow “V” angle for better packaging. This was originally done to fit six-cylinder engines under the hoods of relatively small cars in the 1990s, but hardly seems necessary in today’s Atlas, which has a cavernous engine bay.

Both engines are coupled to an eight-speed automatic transmission, with standard front-wheel drive (FWD) or optional 4Motion all-wheel drive (AWD). The 4Motion system defaults to FWD under low load to save fuel, but can send power to the rear wheels when needed through an electro-hydraulically-actuated center differential.

With the base 2.0-liter engine and AWD, the driving experience was underwhelming. Acceleration was adequate, and while the automatic transmission shifted fairly quickly, shifts were somewhat rough when accelerating away from a stop. Despite its multilink independent rear suspension, handling was decidedly truck-like. The Atlas also punishes its occupants with poor ride quality. Every pavement imperfection can be felt in the cabin, often with a disconcerting bang and shudder. This may have been partly down to our test car’s 20-inch wheels, but it still seems like VW missed the mark with suspension tuning.

AWD models get an Active Control feature with different drive modes, but it doesn’t include anything that might improve on-road handling. Instead, you get Onroad, Snow, Offroad, and Custom Offroad modes. Onroad includes Normal, Sport, Comfort, and Individual settings, but these only affect engine, transmission, steering, and adaptive cruise control response—not suspension.

Despite the presence of an Offroad mode and eight inches of ground clearance, it’s probably best to stick to the pavement. While it has those features, the Atlas lacks a four-wheel drive (4WD) system with low range, and its tires are better suited to pavement than mud. The long, tall hood also limits forward visibility, which would be a liability on tight off-road trails.

VR6 models can be equipped with a factory-installed tow hitch, enabling a 5,000-pound towing capacity. That’s about average for this segment, although the Nissan Pathfinder is rated to tow up to 6,000 pounds. Atlas models with the base four-cylinder engine are only rated to tow 2,000 pounds, with a dealer or port-installed hitch. 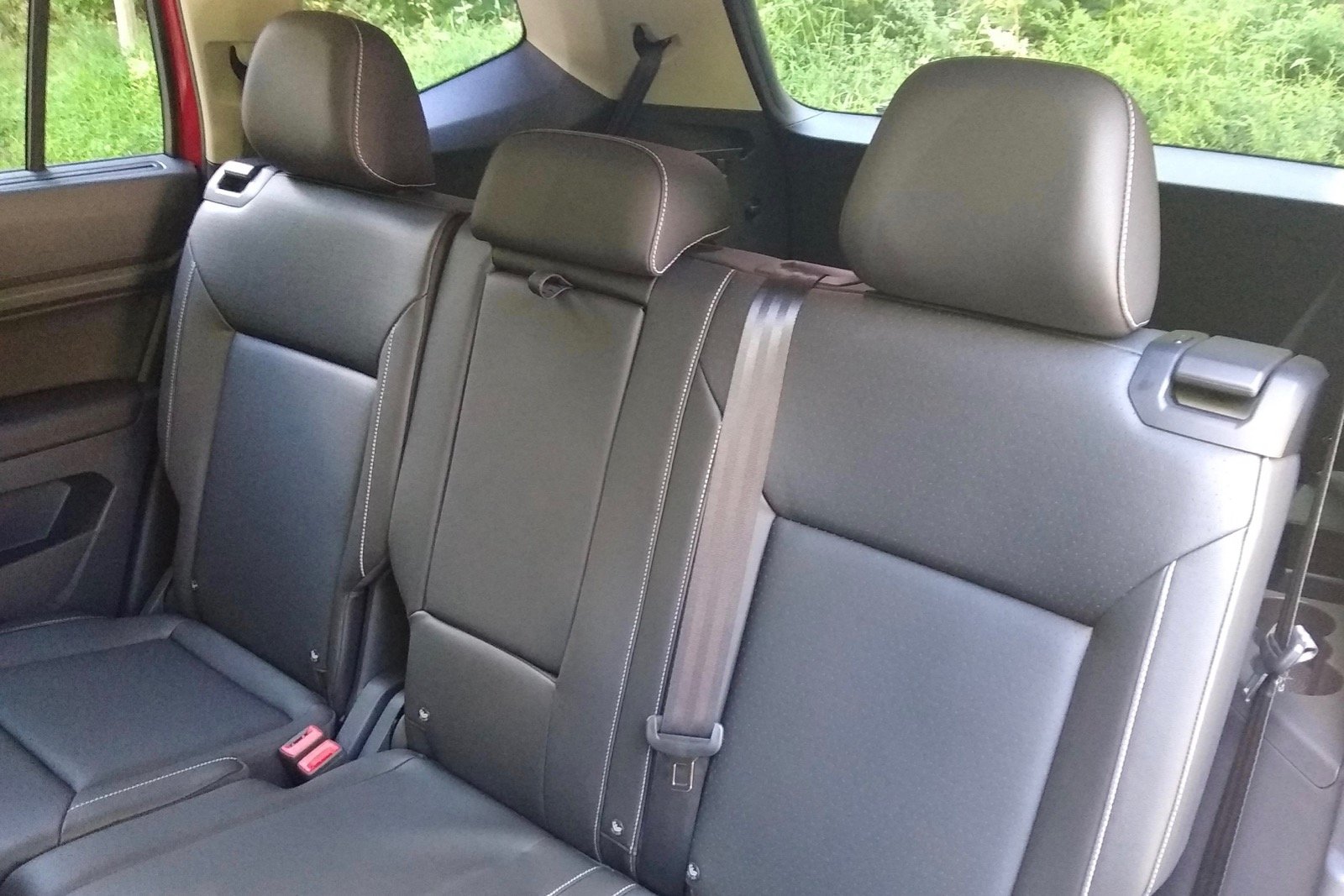 Three-row crossovers like the Atlas are designed as family haulers for buyers who don’t want to be seen in a minivan. On passenger and cargo space (96.8 cubic feet behind the front seats and 20.6 cubic feet with all seats up), the Atlas is about average for this segment, although it does offer more third-row legroom than most competitors. However, that seems to come at the expense of second-row legroom, which is the worst among the VW’s competitive set. The standard second-row bench seat is also uncomfortable, with thin, flat cushions. The third row may be the distinguishing feature here, but the second row is likely to get more use, so it needs to be roomy and comfortable as well.

Folding and raising the second- and third-row seats is fairly straightforward, and third-row access is about as easy as it gets in a vehicle like this thanks to a sliding second-row bench. This is where a minivan’s sliding doors and lower step-in height really come in handy, but many buyers prefer the more rugged image of a crossover.

From the touchscreen to the shifter, to the climate-control knobs, controls are placed within easy reach of the driver’s seat, and are logically laid out. It’s clear that the Atlas was built by the same company that makes the driver-focused Golf GTI hot hatchback. Up to five USB ports are available across the first and second rows, along with an optional wireless charging pad for phones in the center stack. It’s angled, ensuring the phone won’t slide off while driving. The Atlas is also available with up to 17 cupholders, which can’t quite match the Subaru Ascent’s record 19 cupholders, but still works out to 2.4 beverages per person.

The Atlas has the tall driving position most crossover shoppers expect, but forward visibility is less than optimal. Ultrasonic parking sensors are standard to help avoid smashing into obstacles while parking, while a low-speed automatic braking feature and active park assist are available on higher trim levels. The latter can steer the Atlas into parallel and perpendicular parking spaces in both forward and reverse. 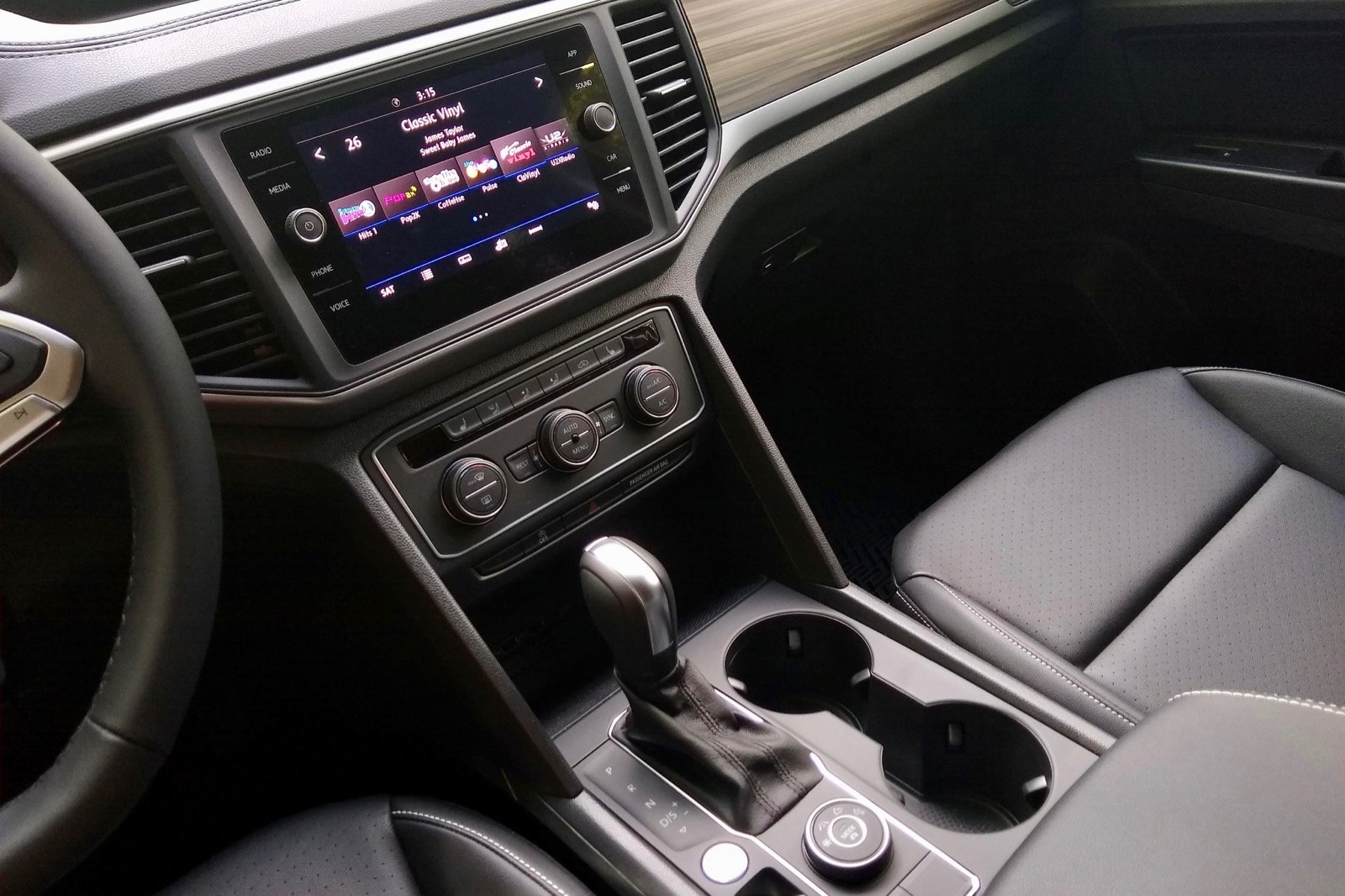 All Atlas models get Bluetooth and Apple CarPlay/Android Auto smartphone compatibility. The base S trim level gets a 6.5-inch infotainment touchscreen, but other models get an 8-inch screen. Volkswagen’s Digital Cockpit is also available on higher trim levels, replacing the analog gauges with a 10.3-inch reconfigurable digital display. Note that the Atlas will get VW’s new MIBIII infotainment system later in the 2021 model year. MIBIII adds multi-phone pairing capability, improved voice recognition, and a redesigned navigation system (on models so equipped).

Our SE with Technology test car had the 8-inch screen without Digital Cockpit, and while the menus were easy to navigate, the displays were plain and text-heavy, making them hard to read at a glance and generally unappealing. The screen is also on the small side for this segment.

The base six-speaker audio system sounds decent for something not wearing a name brand. In addition to the normal bass and treble settings, it includes an option to center the sound in a specific row (mostly by lowering the volume in other rows), which might come in handy for parents who get sick of listening to their kids’ music. A 12-speaker Fender audio system is available on SEL and higher trim levels.

New for 2021 is a built-in 4G LTE WiFi hotspot that can support up to four devices. Service is provided by Verizon, and customers with existing unlimited mobile plans can simply add an Atlas to those plans. Rates for non-Verizon customers start at $20 per month. 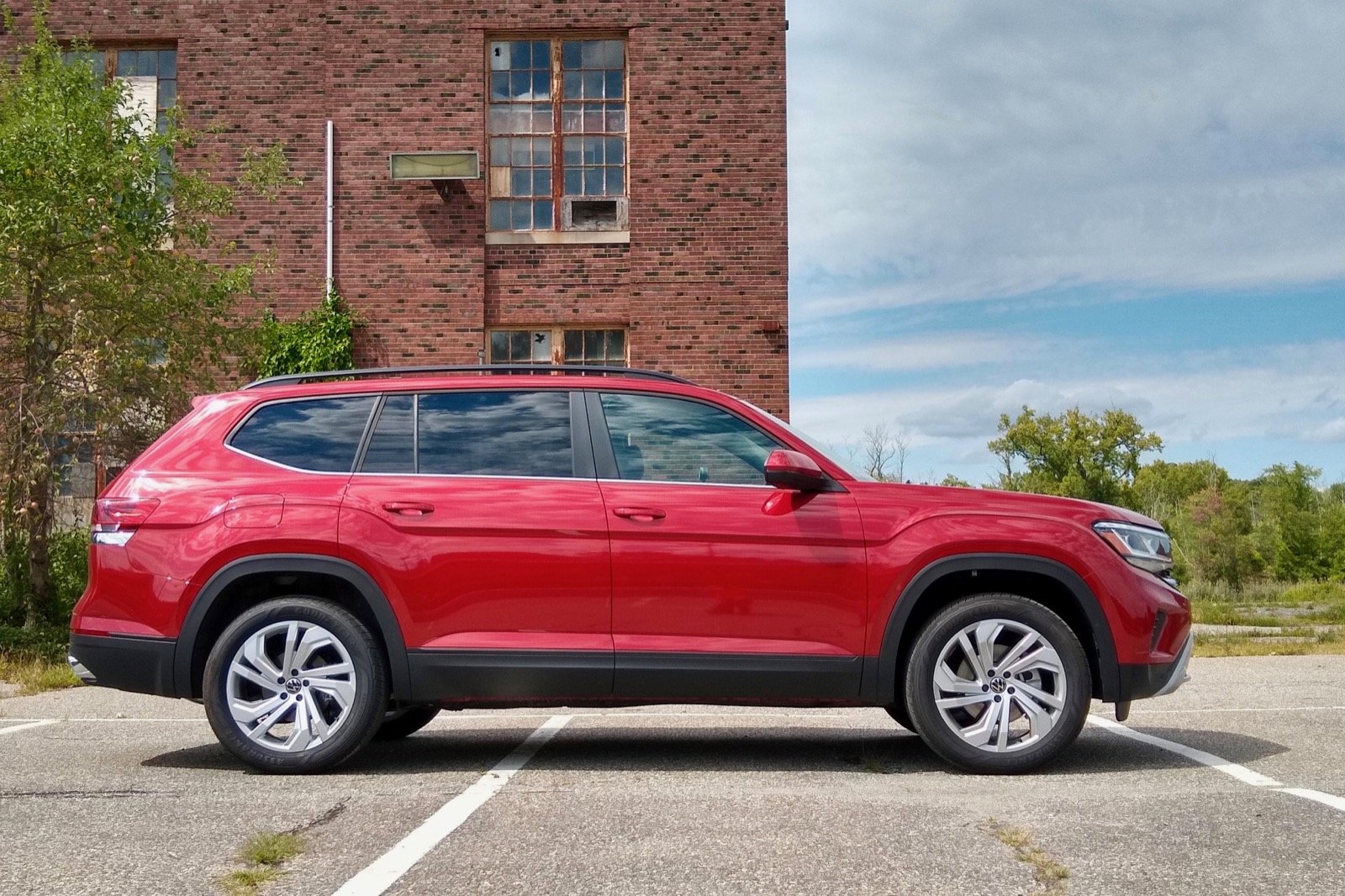 The Atlas received the top “good” rating in all Insurance Institute for Highway Safety (IIHS) crash tests, but with a “marginal” rating for child-seat anchors, and mixed headlight ratings. The Standard headlights were rated “marginal,” while the headlights available on the pricier SEL and SEL Premium trim levels were rated “good.”

The National Highway Traffic Safety Administration (NHTSA) hasn’t published ratings for the 2021 Atlas, but the similar 2020 model received a five-star overall rating, with five stars in frontal and side crash tests, and four stars in rollover crash tests.

Every 2021 Atlas trim level gets standard automatic emergency braking and blind-spot monitoring. Adaptive cruise control and lane-keep assist are available on higher trim levels, as is a traffic-jam assist feature that can accelerate, brake, and keep the car centered in its lane at speeds below 35 mph. It’s a handy feature in stop-and-go traffic, but it’s worth noting that competitors like the Ford Explorer, Subaru Ascent, and Toyota Highlander offer similar capability for higher-speed highway driving as well.

The Atlas is due to get mor sophisticated driver aids later in the model year. SEL and SEL Premium trim levels will get Travel Assist, which enables automated lane centering at speeds up to 95 mph, and Emergency Assist, which can bring the car to a complete stop if the driver is incapacitated. 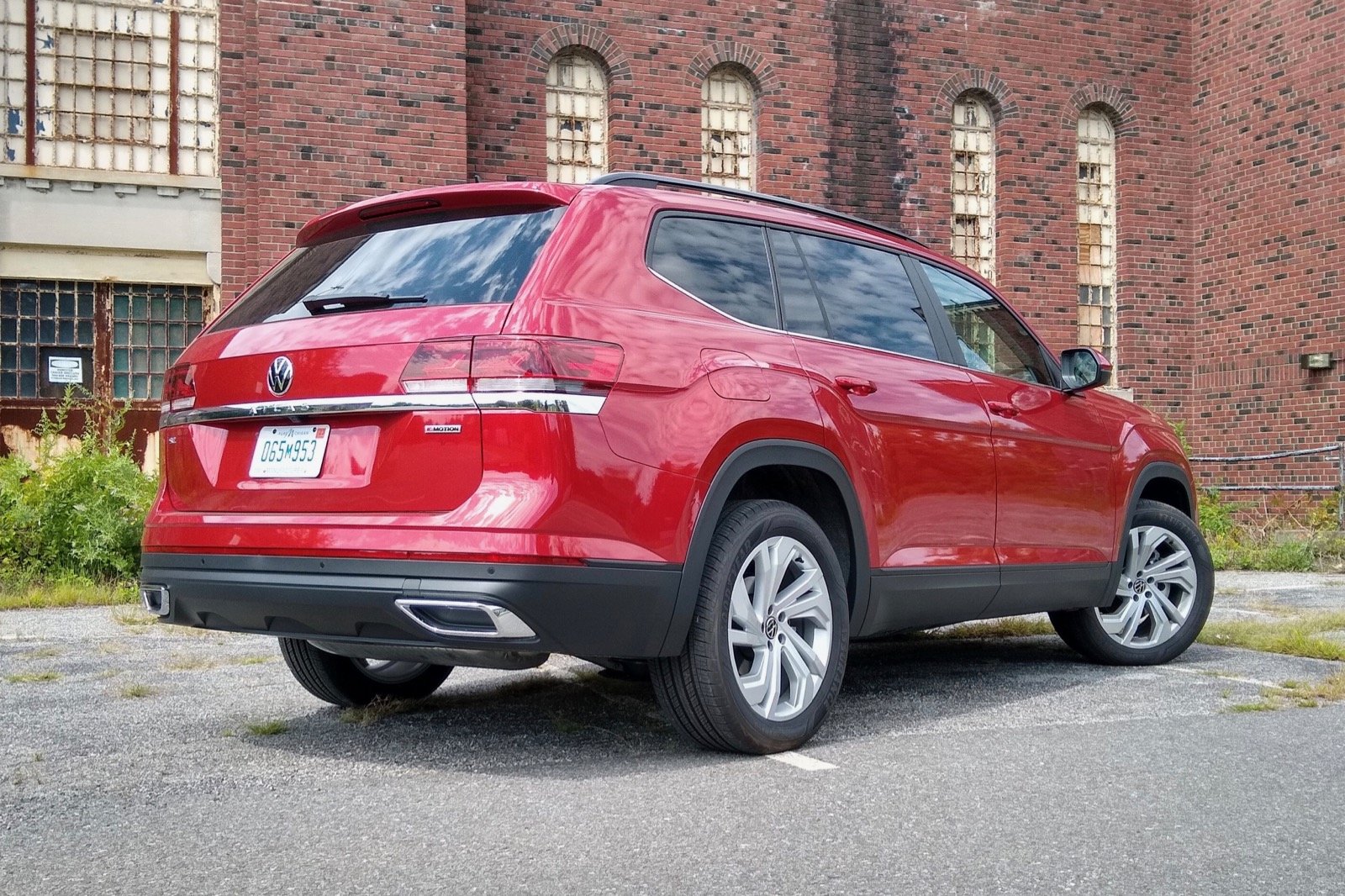 That price range matches most other midsize three-row crossovers, but some competitors offer more standard tech and safety features. Adaptive cruise control is standard on the Honda Pilot and Toyota Highlander, for example. Volkswagen’s four-year/50,000-mile bumper-to-bumper warranty is fairly good for this segment, but can’t match the five-year/60,000-mile basic warranty and 10-year/100,000-mile warranty of the Hyundai Palisade and Kia Telluride twins.

The Atlas covers the bases on interior space, horsepower, and towing capacity, but doesn’t top the segment in any of these areas. The interior is well designed and functional, but let down by cheap-looking materials and an underwhelming infotainment system. Most buyers likely aren’t expecting sporty handling, but the ride quality of our test car was shockingly bad for a modern crossover.

So while the Atlas has some clear faults, there isn’t really anything that makes it stand out in the crowded three-row crossover segment. The basic vehicle is unremarkable, and VW doesn’t offer any standout features like a bigger screen or a hybrid powertrain that would warrant considering the Atlas over competitor models.

What's your take on the 2021 Volkswagen Atlas?

Have you driven a 2021 Volkswagen Atlas?
Rank This Car

Looking for a Used Atlas in your area?

How Come Every Time I Turn On My Vw Atlas The Radio It Goes To Am?

Leaving Car Running While In A Restaurant, Dog Inside.

Going into restaurant with dog in car. Can I leave car running How to do that.

WHAT IS THE BEST WAY TO TOW THE ATLAS S FWD? I KNOW IT CANT BE FLAT TOWED BUT IS THERE ANY MODS OR DOLLY THAT IS ABLE TO BE USED?