Looking for a New Toyota Tacoma in your area?

Toyota’s midsize pickup truck is a little rough around the edges but still a solid choice. 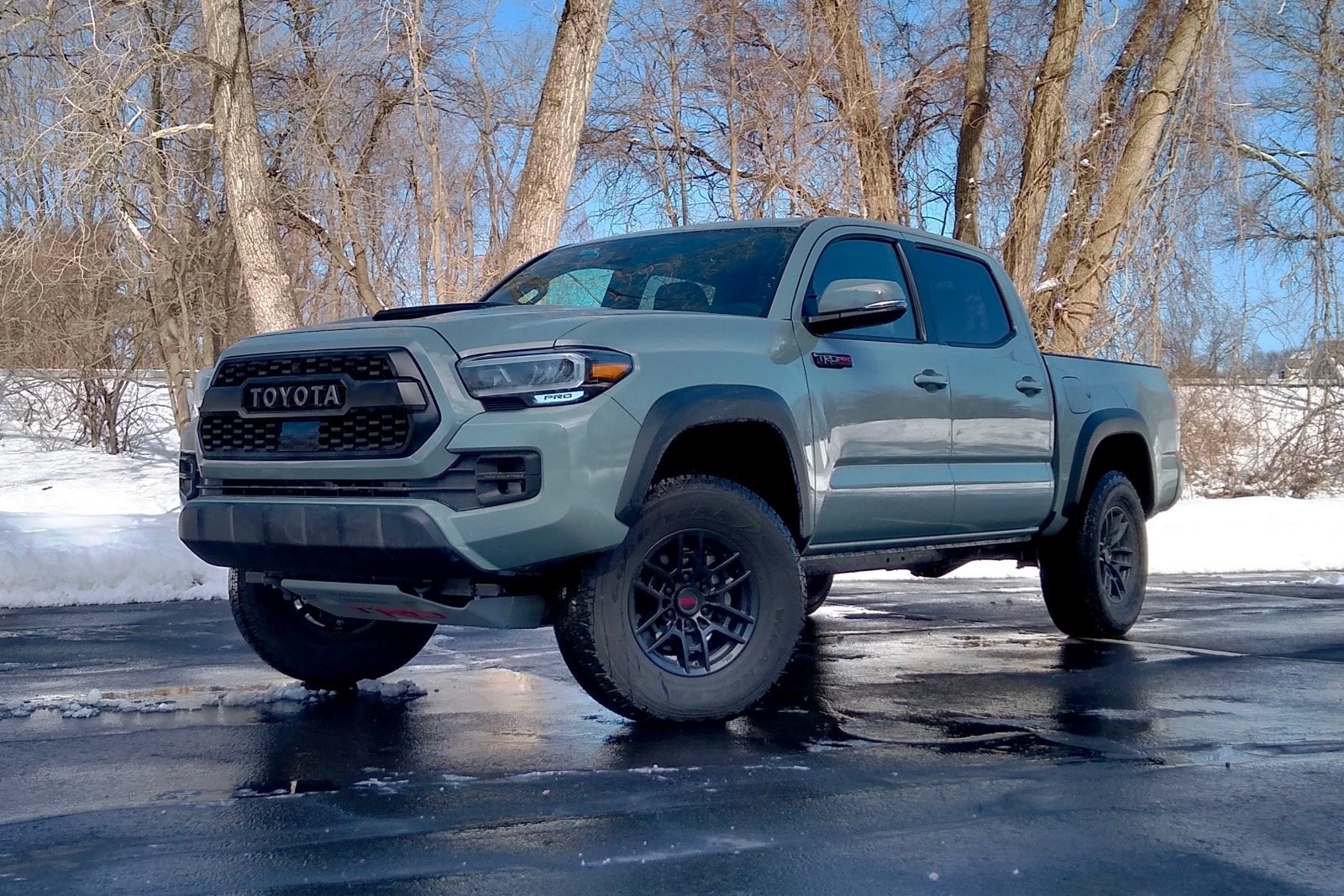 Last redesigned for the 2016 model year, The Tacoma once dominated midsize-truck sales. In recent years, though, it’s faced stronger competition from the Chevrolet Colorado/GMC Canyon twins, the Ford Ranger, and the Jeep Gladiator. A redesigned Nissan Frontier and heavily-updated Honda Ridgeline are also on the way.

Our test vehicle was a Tacoma TRD Pro Double Cab. The TRD Pro is the most off-road focused of the Tacoma models, so naturally, it gets standard 4WD drive. While Toyota does offer a more comfort-oriented Tacoma Limited model, the TRD Pro is also positioned at the top of the lineup. 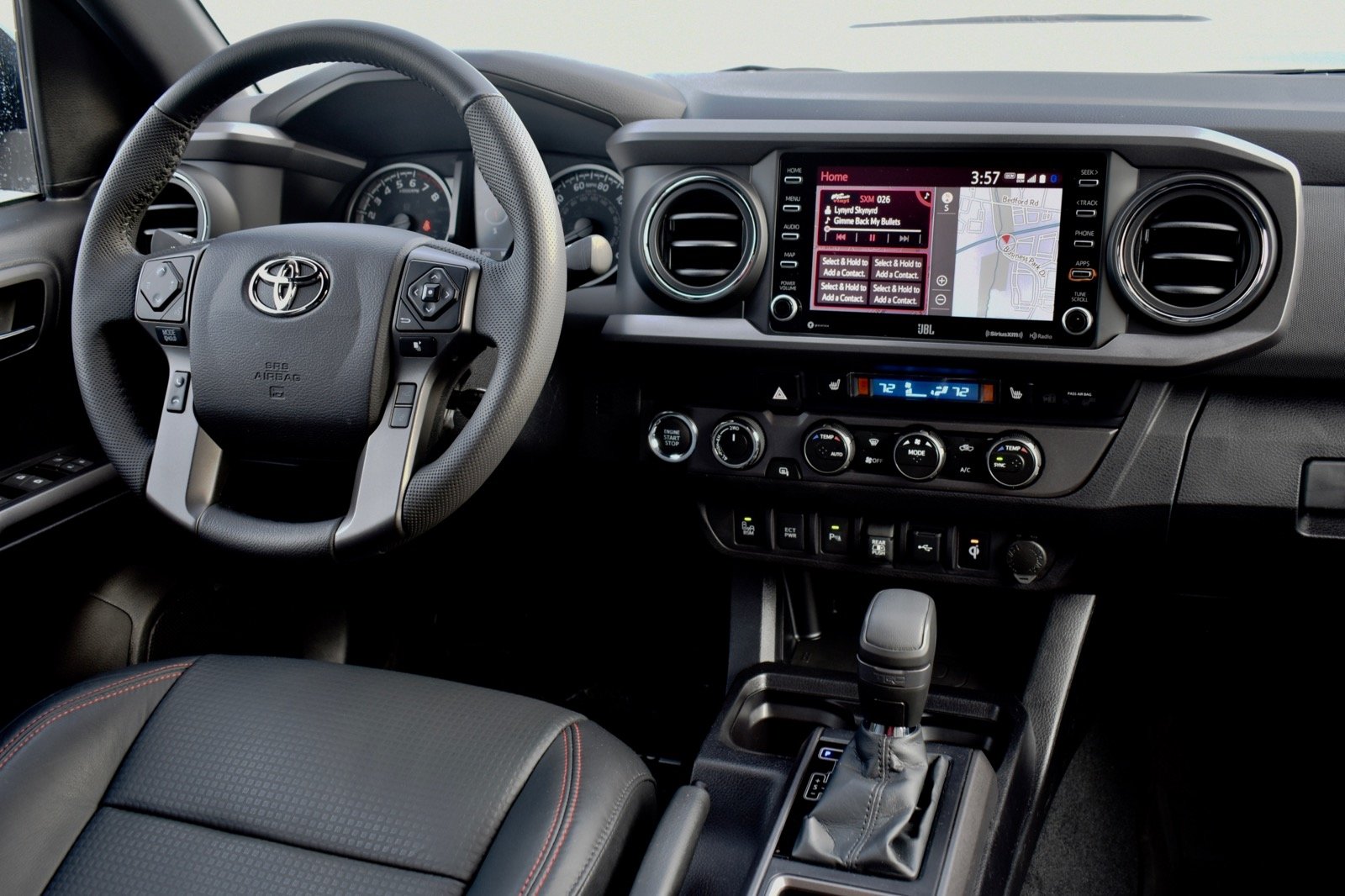 The Tacoma looks like the platonic ideal of a truck. It’s got all of the styling elements one expects of a stereotypical pickup, from boxy fender flares and a tall hood, to a shield-like grille and lines that seemed to have been designed exclusively with a ruler. That makes for a good contrast to the more streamlined look of the Ford Ranger or the General Motors midsize twins, without the exaggerated features of some larger trucks (including Toyota’s own Tundra).

Certain Tacoma models also get their own unique styling features. The new-for-2021 Trail Edition gets 16-inch TRD Off-Road alloy wheels and the grille from the Tacoma Limited, plus some model-specific color options, while the Nightshade Edition gets blacked-out trim. The Tacoma TRD Pro gets a model-specific grille with “Toyota” block lettering, a blacked-out hood and fender flares, Rigid Industries LED fog lights, and for 2021, an exclusive color—Lunar Rock.

Like most pickups (the Honda Ridgeline being the exception), the Tacoma sticks with body-on-frame construction, instead of the unibody construction used by most modern cars and SUVs. That normally penalizes ride and handling, but benefits towing and off-road capability.

The interior has the same rugged styling as the exterior, with a dashboard made up of chunky plastic elements. Material quality seemed appropriate for a base Tacoma, and looked like it could stand up to abuse, but was harder to justify at our TRD Pro tester’s circa-$45,000 base price (even with the optional leather upholstery). However, it’s not too bad considering the number of features included at that price, and the TRD Pro model’s focus on off-roading, rather than luxury. 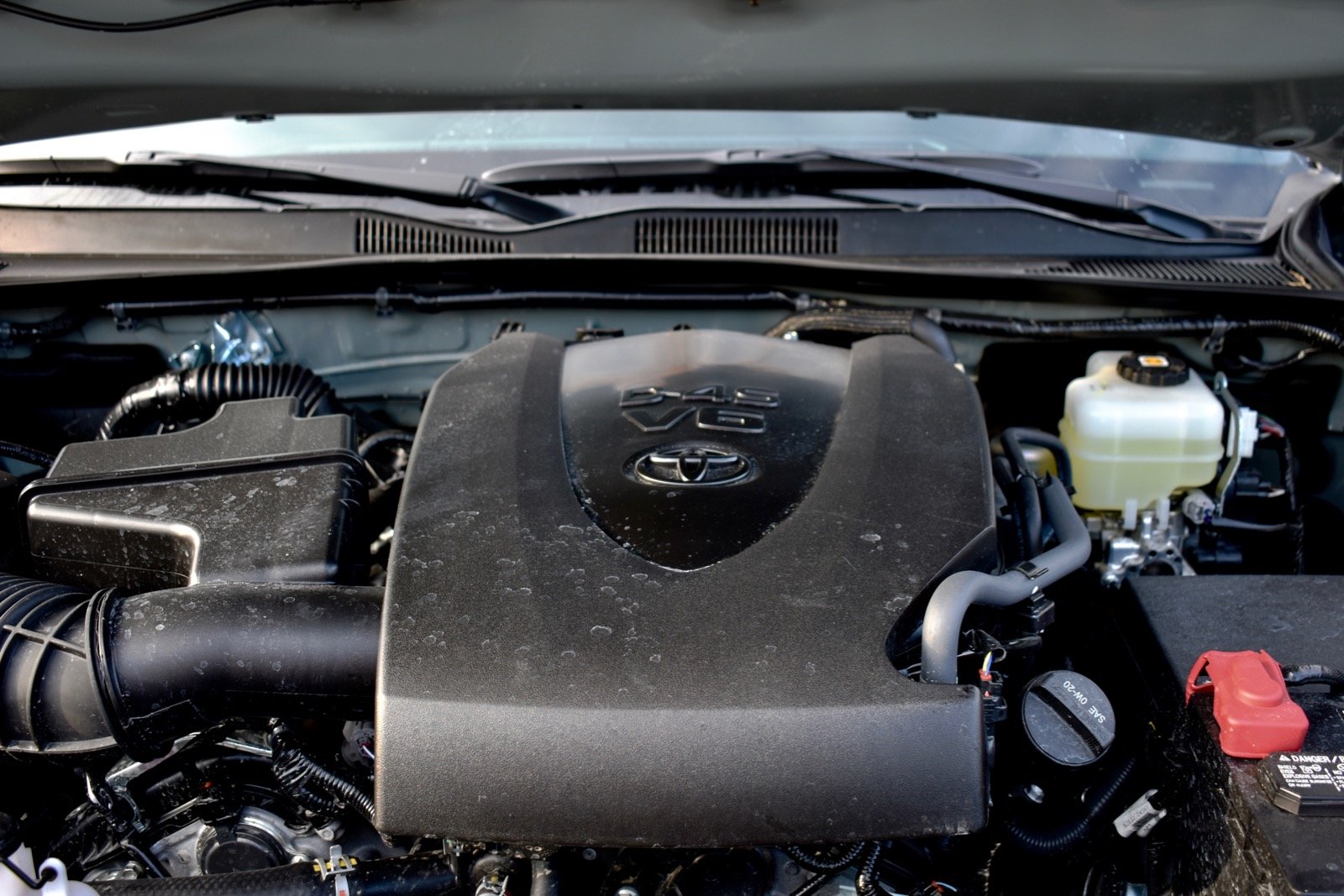 Toyota offers two powertrain options in the 2021 Tacoma. Base models get a 2.7-liter four-cylinder engine, which produces 159 horsepower and 180 pound-feet of torque. An optional 3.5-liter V6 makes 278 hp and 265 lb-ft of torque. The V6 engine runs on the Atkinson cycle and uses Toyota's D4S fuel-injection system, which combined port injection and direct injection, for better fuel economy.

The four-cylinder engine is available only with a six-speed automatic transmission, but the V6 is available with both the automatic and a six-speed manual transmission. The optional part-time 4WD drivetrain features low range and a standard electronic rear limited-slip differential (a fully locking rear diff is also available). All Tacoma models get coil-spring front suspension and leaf-spring rear suspension.

The TRD Pro model is on roughly the same level as the Ford Ranger FX4, GMC Canyon AT4, and Nissan Frontier Pro-4X when it comes to off-road capability. The Chevrolet Colorado ZR2 and Jeep Gladiator Rubicon can go even further off the beaten path, but the TRD Pro should suffice for all but the most hardcore off-road enthusiasts.

On the road, our TRD Pro tester felt like a traditional truck. While Ford and GM have imbued their midsize trucks with a hint of car-like handling, Toyota doesn’t bother with that. The Tacoma didn’t suffer corners gladly, and braking had to be planned out well in advance. These aren’t deal-breakers; they’re just what you should expect from a vehicle like this. The cabin was also impressively quiet, despite the TRD Pro’s off-road tires, but ride quality was poor. Despite the V6 engine, acceleration was also troublingly slow, something we attribute to the six-speed automatic’s hesitance to shift. We weren’t fans of the sound coming from the TRD Pro’s cat-back exhaust, either. Toyota has made this engine sound good in other vehicles, but in the Tacoma TRD Pro, it made an unattractive moan.

Toyota quotes a maximum towing capacity of 6,800 pounds and a maximum payload capacity of 1,685 pounds. However, as is often the case with trucks, this is a bit of a shell game. The Tacoma only achieves that maximum tow rating in Access Cab V6 RWD form, but you’ll need a RWD Access Cab model with the four-cylinder engine to get the maximum payload rating. It’s the same story with trucks from other manufacturers; you just have to remember to read the fine print.

The Tacoma’s payload and towing capacity are respectable numbers, but they won’t win any bragging rights. The Toyota has a greater maximum payload capacity than the GM twins but falls short of the Jeep Gladiator and class-leading Ford Ranger. When it comes to towing capacity, the Tacoma is behind not only the Jeep and Ford but also Duramax diesel versions of the Chevy Colorado and GMC Canyon. 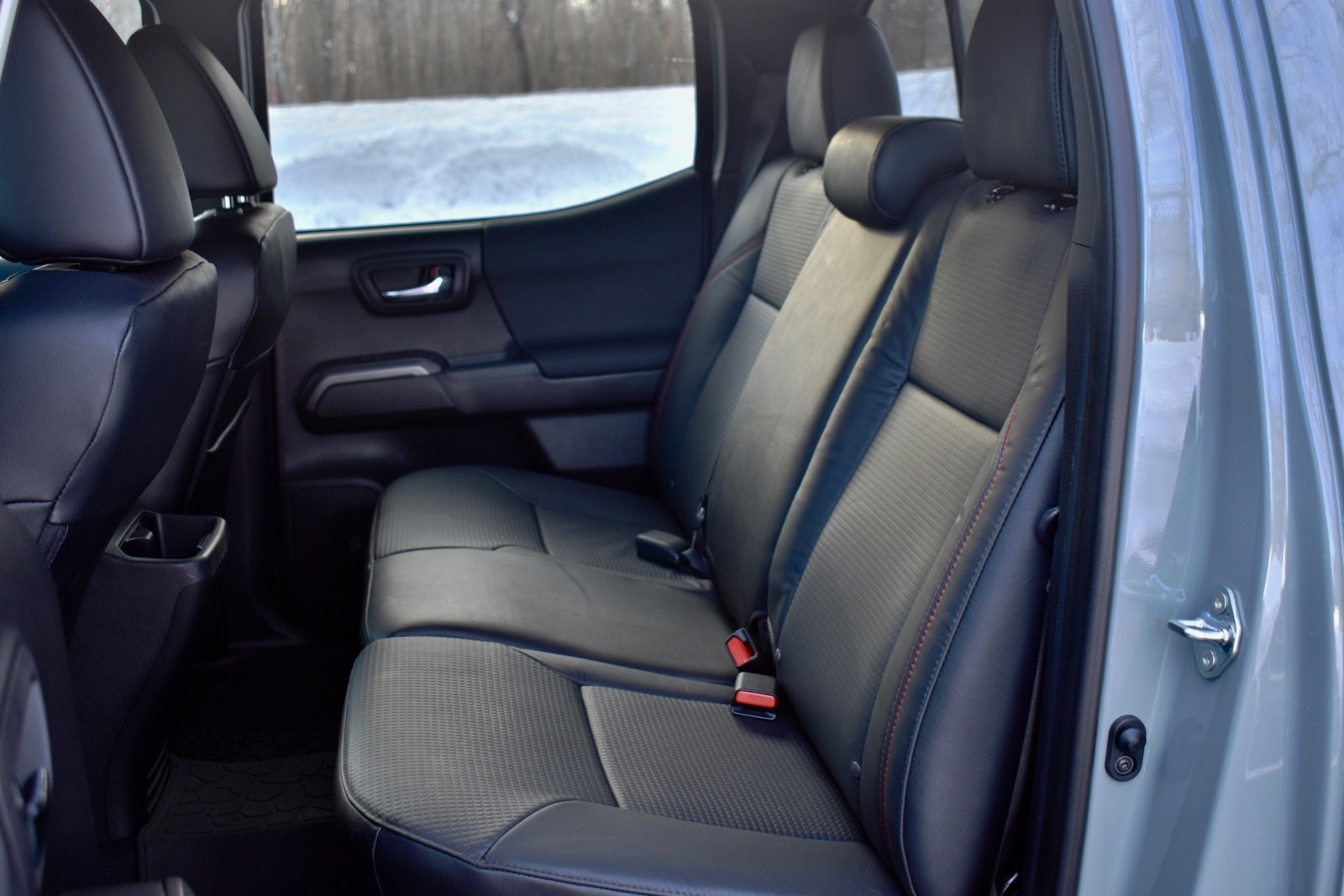 A four-door cab may seem like the perfect way to turn a pickup into a daily driver capable of hauling people as well as stuff—until you actually sit in the cab. Packaging a bed and full front and rear seats in a midsize-truck footprint inevitably leads to compromises in interior space.

Even compared to other midsize pickups, though, the Tacoma Double Cab lacks interior space. Rear headroom and legroom are the worst in the segment, and front headroom and legroom are also below average. The lack of headroom combined with the relatively short windshield and side glass to create a bunker-like feel, and the tall hood impaired forward visibility.

As with many other trucks, the rear seats fold up to reveal storage cubbies, giving you a secure place to store things you wouldn’t want to leave in the bed. Other in-cab storage is fairly limited, however, although Toyota did include a wireless charging pad that should be able to accommodate the largest phones. The concentration of cupholders around the center console seemed like an odd choice to us, unless pickup drivers want a variety of drinks.

The Tacoma doesn’t offer any clever in-bed storage bins like the Honda Ridgeline, or a bed step like the Chevy Colorado and GMC Canyon, but it does get a standard rail system with tie-down cleats, and a 120-volt outlet is also available. The inner bed is also made from sheet-molded composite, a lightweight alternative to steel that won’t rust. 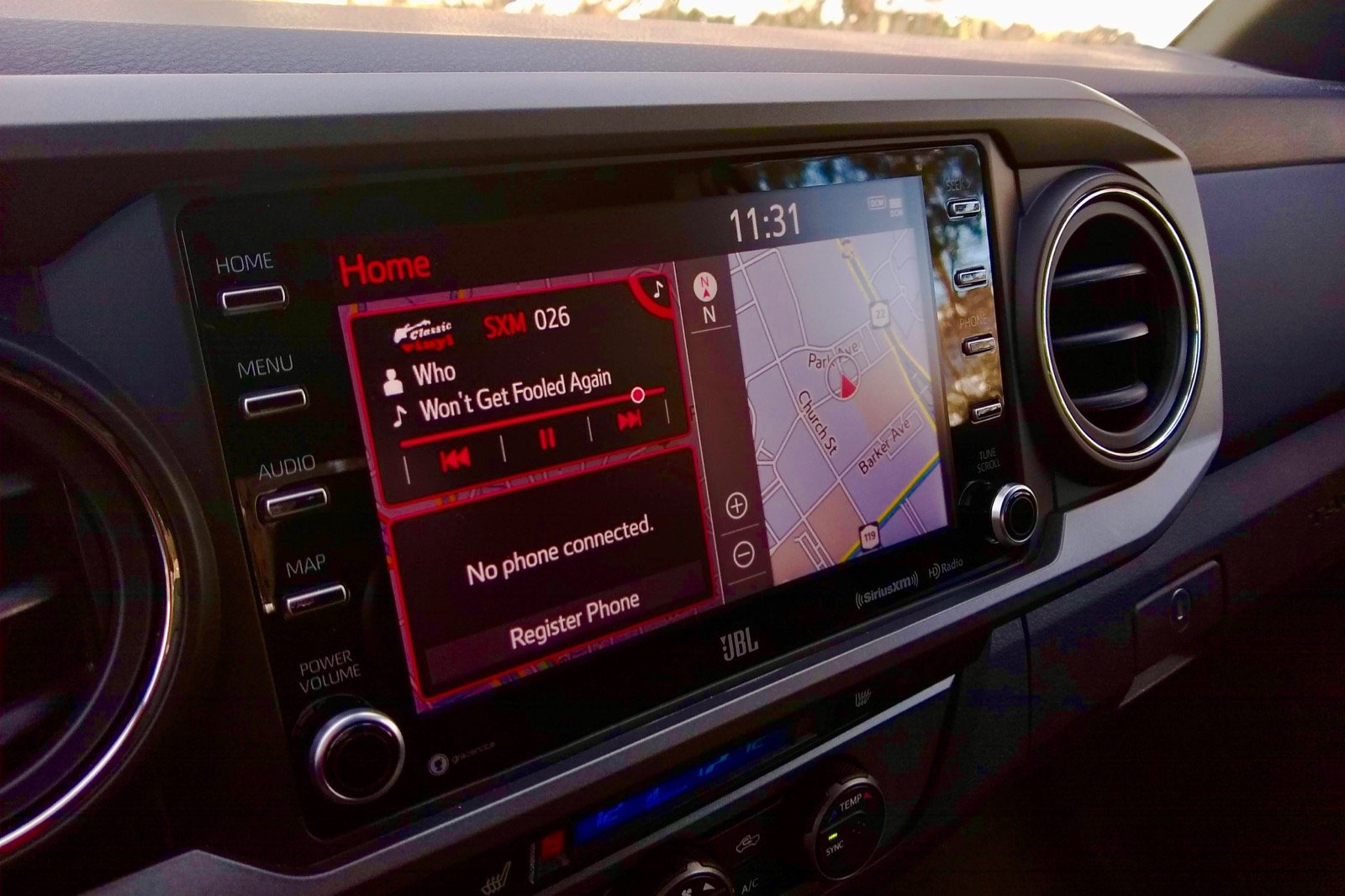 The base Tacoma SR trim level gets a 7-inch touchscreen, while all other Tacoma models get an 8-inch touchscreen. Apple CarPlay, Android Auto, Amazon Alexa, Bluetooth, and SiriusXM satellite radio (with a three-month free trial) are standard across the board. A six-speaker JBL audio system with a subwoofer is available on higher trim levels.

As with other Toyota models, the infotainment system is functional, but not a standout feature. The touchscreen was responsive and easy to navigate, with helpful shortcut buttons for the main menus, plus chunky buttons on the steering wheel. However, graphics were plain, and Toyota doesn’t offer any features beyond basic functions like navigation and phone connectivity.

Our TRD Pro tester had the optional Multi-Terrain Monitor surround-view camera system, which Toyota says is a good feature for spotting obstacles off-road, but also came in handy when maneuvering in and out of parking spaces. 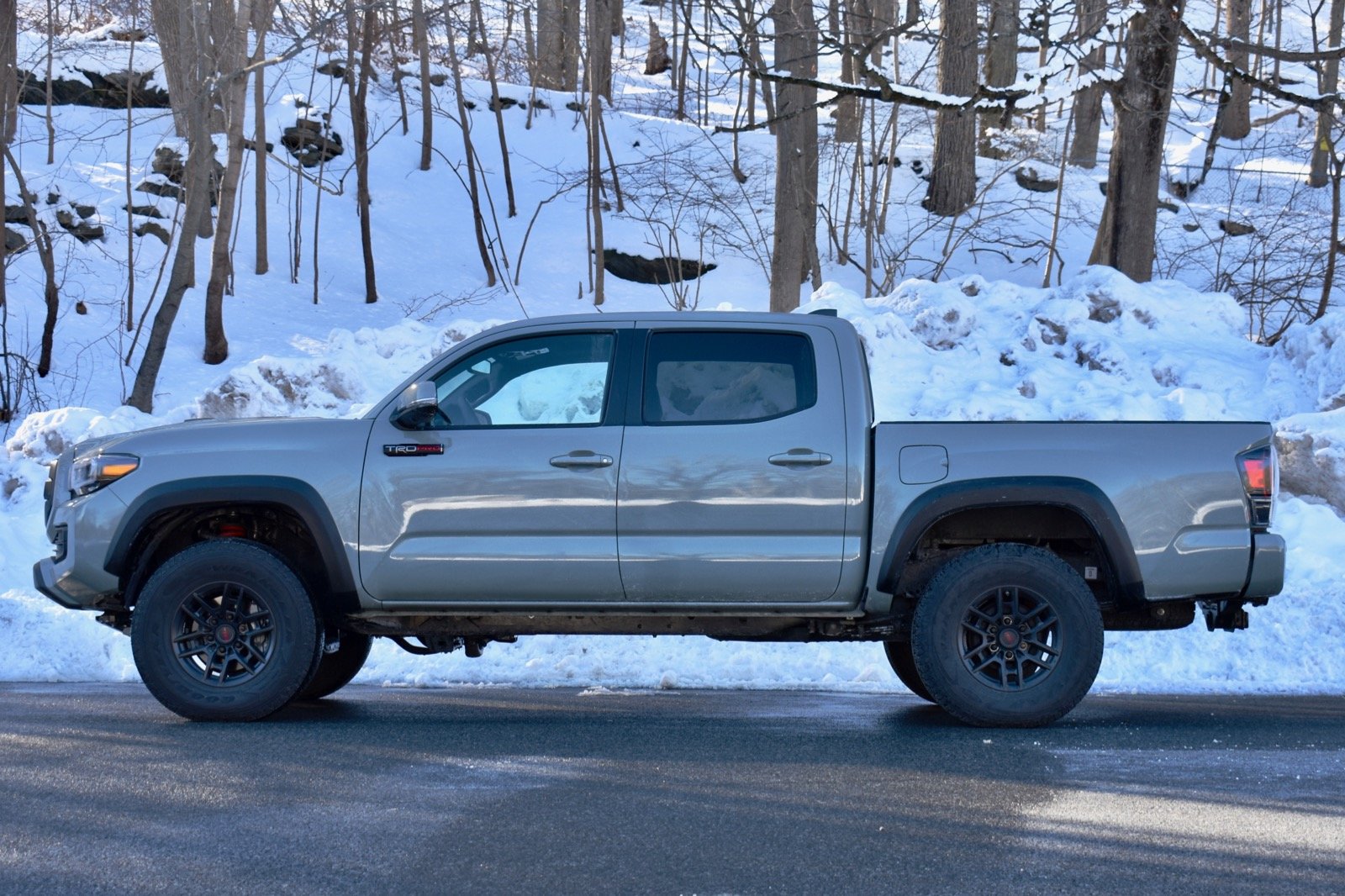 The Insurance Institute for Highway Safety (IIHS) gave the 2021 Toyota Tacoma Double Cab top “Good” scores in all crash tests except the passenger-side small overlap front test, where the truck received an “Acceptable” score (full ratings for the Access Cab haven’t been published). Headlights were a mix of “Good” and “Marginal” ratings, depending on the trim level, but the Tacoma earned the highest “Superior” rating for front-crash prevention tech.

The National Highway Traffic Safety Administration (NHTSA) gave both the Access Cab and Double Cab configurations a four-star overall rating, with four stars in frontal and rollover crash testing, and five stars in side crash tests.

Standard driver-assist features include forward-collision warning with pedestrian detection, automatic emergency braking, lane-departure warning, automatic high beams, and adaptive cruise control. That’s a pretty good array of features for a truck, but the Ford Ranger also offers lane-keep assist, a blind-spot monitoring system that can cover both the truck and a trailer, and rear cross-traffic alert. 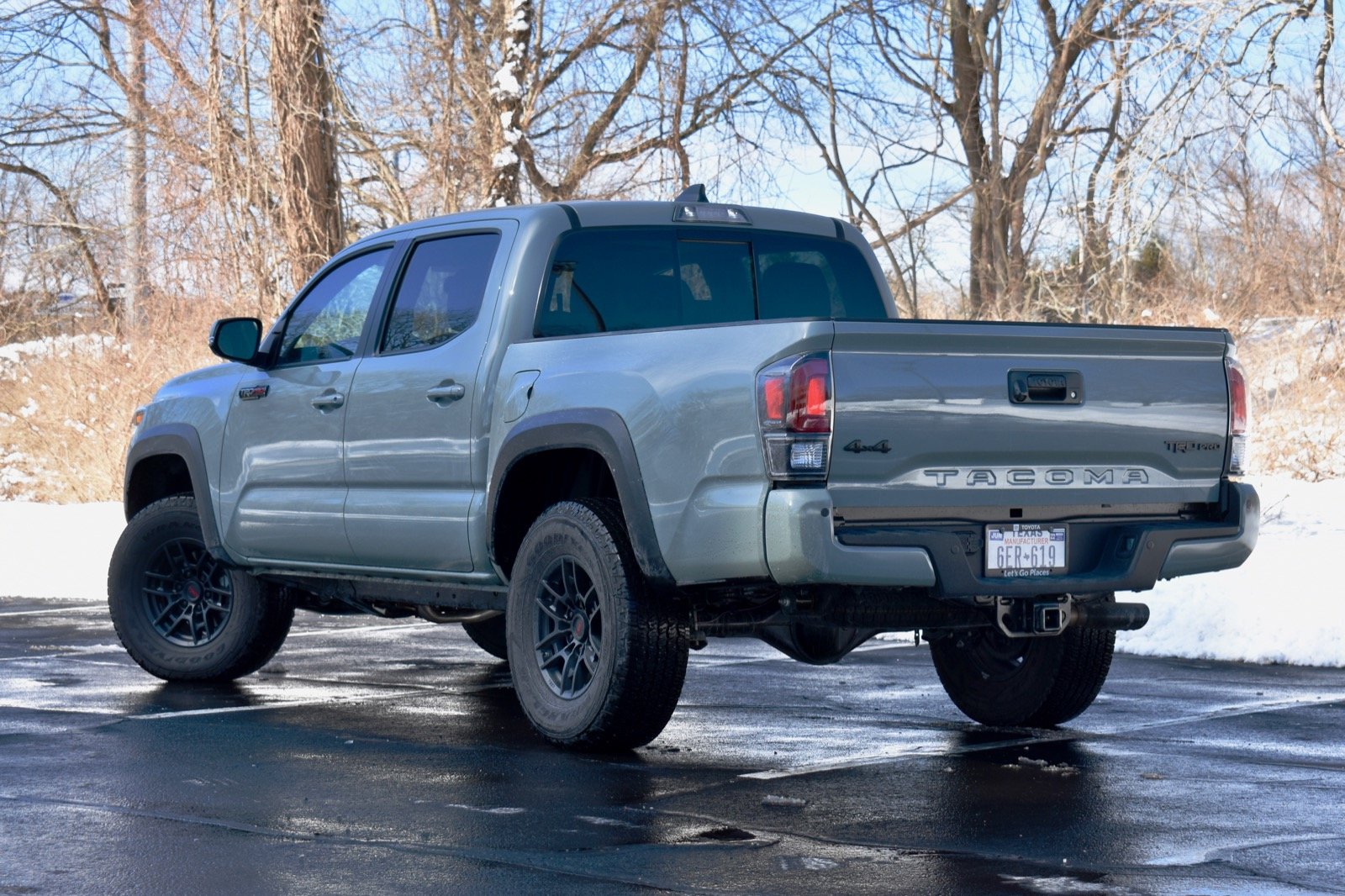 Toyota offers a three-year, 36,000-mile, basic warranty and a five-year, 60,000-mile, powertrain warranty. The Tacoma has an excellent reputation for reliability—something that can’t be said of its American competitors. New-car buyers also get ToyotaCare, which includes two years or 25,000 miles of free factory-scheduled maintenance (at a dealership) and two years of 24-hour roadside assistance with unlimited mileage.

Pricing for the 2021 Toyota Tacoma starts at $27,325 for a base RWD SR with the Access Cab. Our 4WD TRD Pro Double Cab was just about the most expensive Tacoma you can buy, with a $47,955 base MSRP. That’s a big step up from the entry-level Tacoma SR, but you’ll pay similar money for a Ford Ranger Lariat Tremor or a well-equipped Jeep Gladiator. There just isn’t much value to be found in the latest crop of off-road-focused midsize trucks.

As other automakers try to rejigger their midsize pickup trucks as lifestyle vehicles, or replacements for the family sedan, Toyota sticks to what it’s good at. The Tacoma is a non-nonsense truck built for towing, hauling, and off-roading—and that’s it. That means the Tacoma is behind the curve in certain areas—such as fuel economy and ride quality.

With fresh competition on the way in the form of the 2022 Nissan Frontier, it’s unclear whether the Tacoma can hang onto its status as the go-to midsize truck. For now, though, this Toyota’s combination of capability and rugged styling is hard to beat.

Omar I Live in Chicago

Have you driven a 2021 Toyota Tacoma?
Rank This Car

Enter your zip to see incentives for a new Tacoma in your area.

for the subscription remote start, is it normal that it works as far as i can start the car remotely, but when i touch the car to open the door it shuts off?

Whay Is Your Website Not Updated To Accept Year 2021 For Searching?

Why is your website not updated to accept year 2021 for searching?