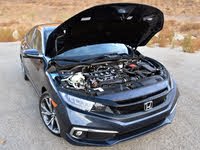 Looking for a New Honda Civic in your area?

The 2021 Honda Civic is the last of its kind. An all-new version is coming soon, which means Honda is offering low-rate financing and appealing lease deals on the outgoing 10th-generation Civic. 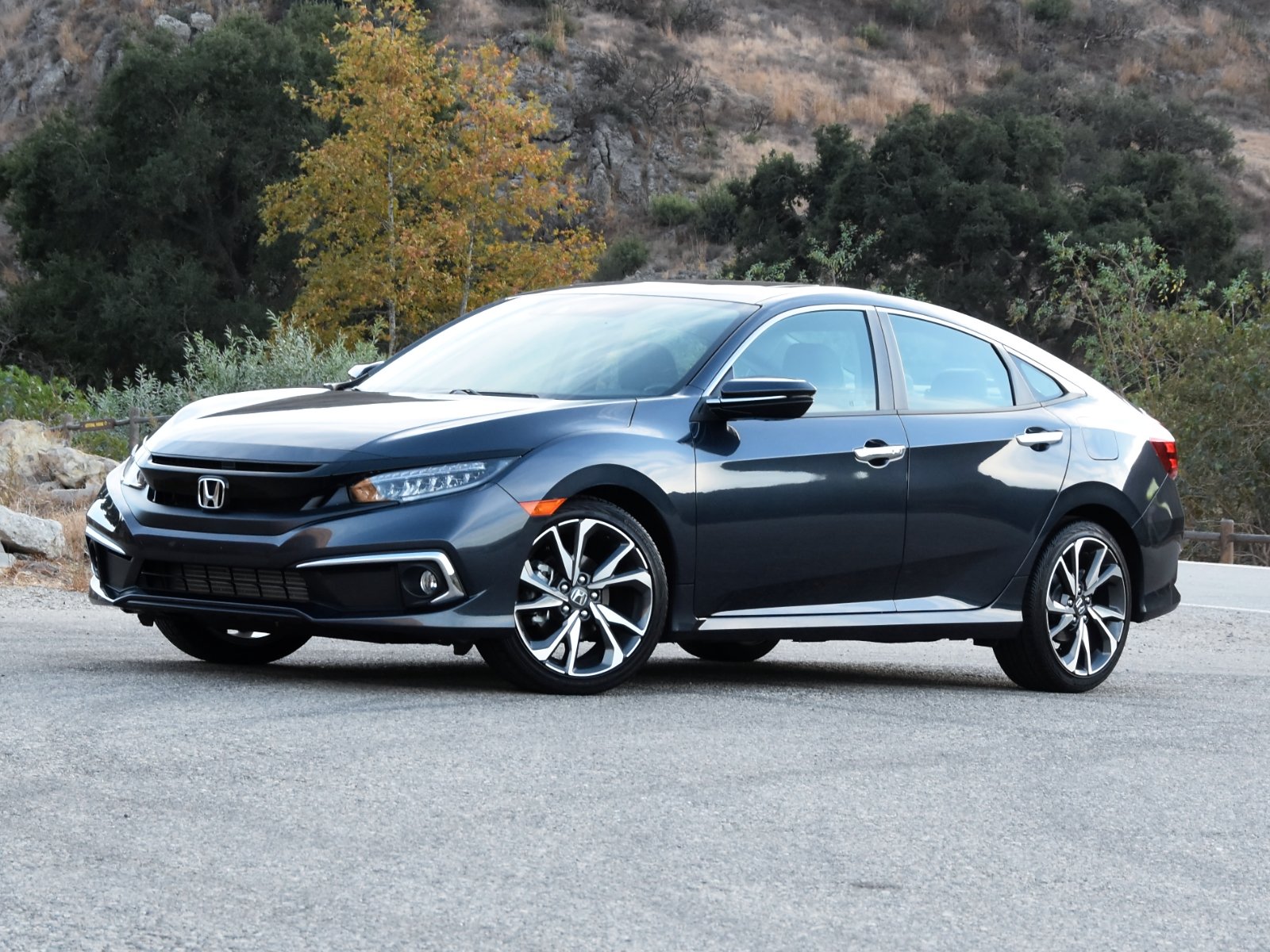 Honda is ready to retire the 10th-generation Civic, one of the groundbreaking versions in the nameplate's long and storied history. From its polarizing design and three body styles to the arrival (finally!) of the Type R performance variant in the U.S. market, this version of the Civic made its mark. And even though the design is now six years old, and the car is ubiquitous on American roads, the 2021 Honda Civic remains worthy of consideration. 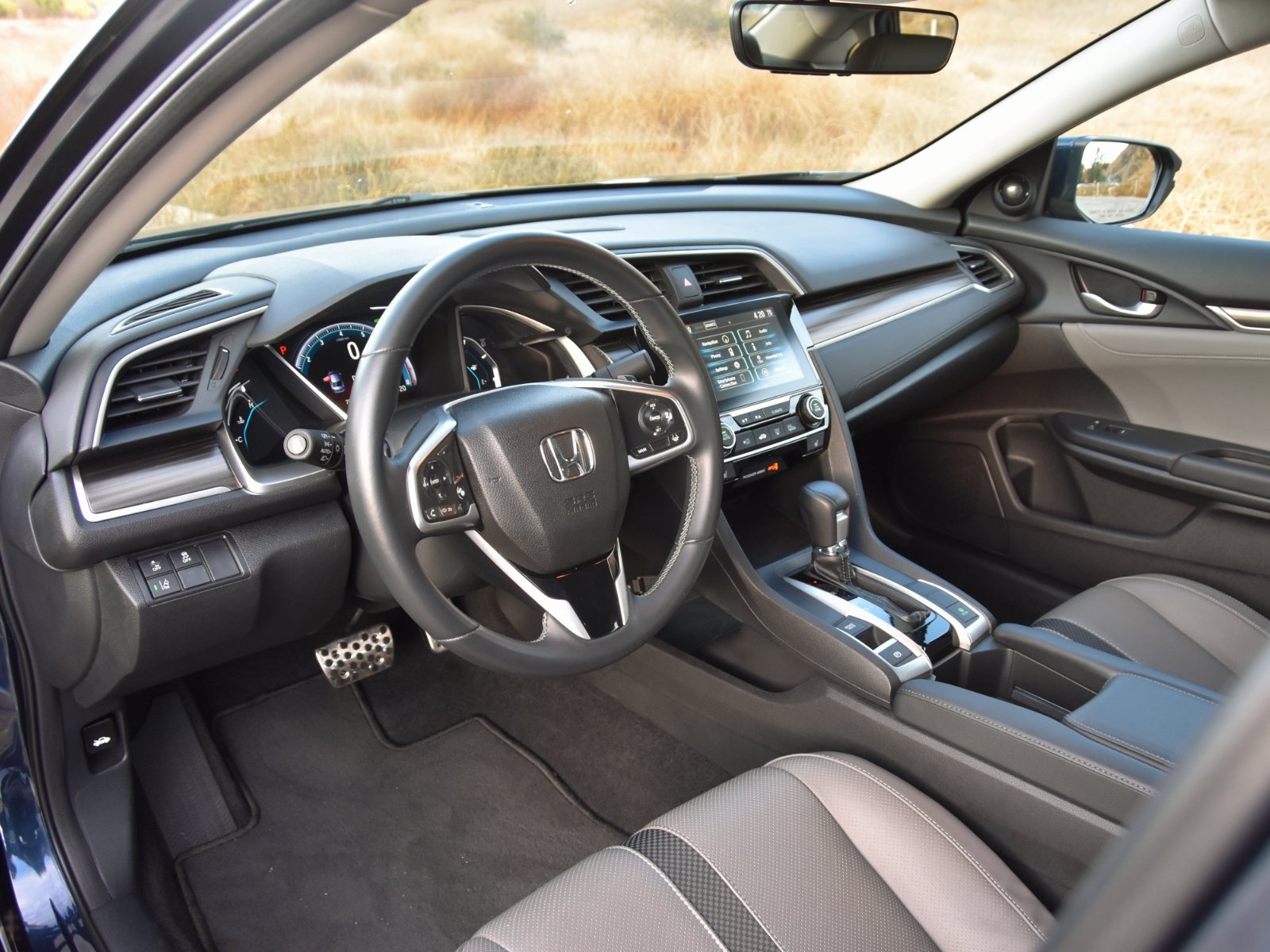 Looking back at the Civic's history, the car's segment-defining versions arrive every ten years or so.

After the 1973 original, Honda released the dramatic 1984 model, segment-defining 1992 model, futuristic 2006 model, and polarizing 2016 model. It's almost as though Honda expends so much energy setting new compact car bars for the competition to hurdle that it needs a break in between.

We'll soon discover if the redesigned 2022 Honda Civic is an exception to the rule. But, based on what we've seen of the concept, the 11th-generation Civic is more like a scaled-down Honda Accord than yet another daring attempt to push the reset button on the compact car segment.

In the meantime, Honda is still selling the excellent 2021 Civic in four-door Civic sedan, five-door Civic hatchback, and performance-tuned Civic Type R format. For the 2021 model year, Honda canceled the two-door Civic coupe, and the sporty Civic Si is on hiatus until the next-gen Civic arrives. With its departure, the manual transmission also disappears from the Civic sedan lineup.

For this review, we examined the Civic sedan. It comes in LX, Sport, EX, EX-L, and Touring trim levels, with pricing that starts at $21,250 and topping out at $28,300, not including a destination charge of $995. Our test car was the Touring sedan and beautiful Cosmic Blue Metallic paint, which costs $395 extra. That brought the test car's price to $29,690, including destination.

Before you grasp your pearls and utter "Oh, my lawd!" you should keep in mind that today's Civic might compete in the compact car segment, but the interior and trunk are sized like a midsize car of just a decade ago. Plus, nobody says you need to get the version with every upgrade.

When the 10th-generation Civic first hit American roads, it grabbed attention, both positive and negative. Now, more than half a decade later, it remains a car with styling you either love or hate, but with over a million of them on the road, at least we're all used to seeing it.

Our test car arrived with Touring trim and Cosmic Blue Paint. This blue is exceptionally appealing, and in combination with the Civic Touring's handsome 18-inch wheels, this Honda looks great. Sometimes. Other times, you look at it, and depending on the angle or lighting, you might wonder what possessed you to buy one.

Daring in 2016, the interior is not quite as dramatic as it was then. In some ways, it looks its age, especially concerning the maximum infotainment screen size of 7 inches. Still, the car's cabin features quality materials, adventurous design, and thoughtful detailing, in keeping with the 10th-generation Civic's role as a trend-setter. 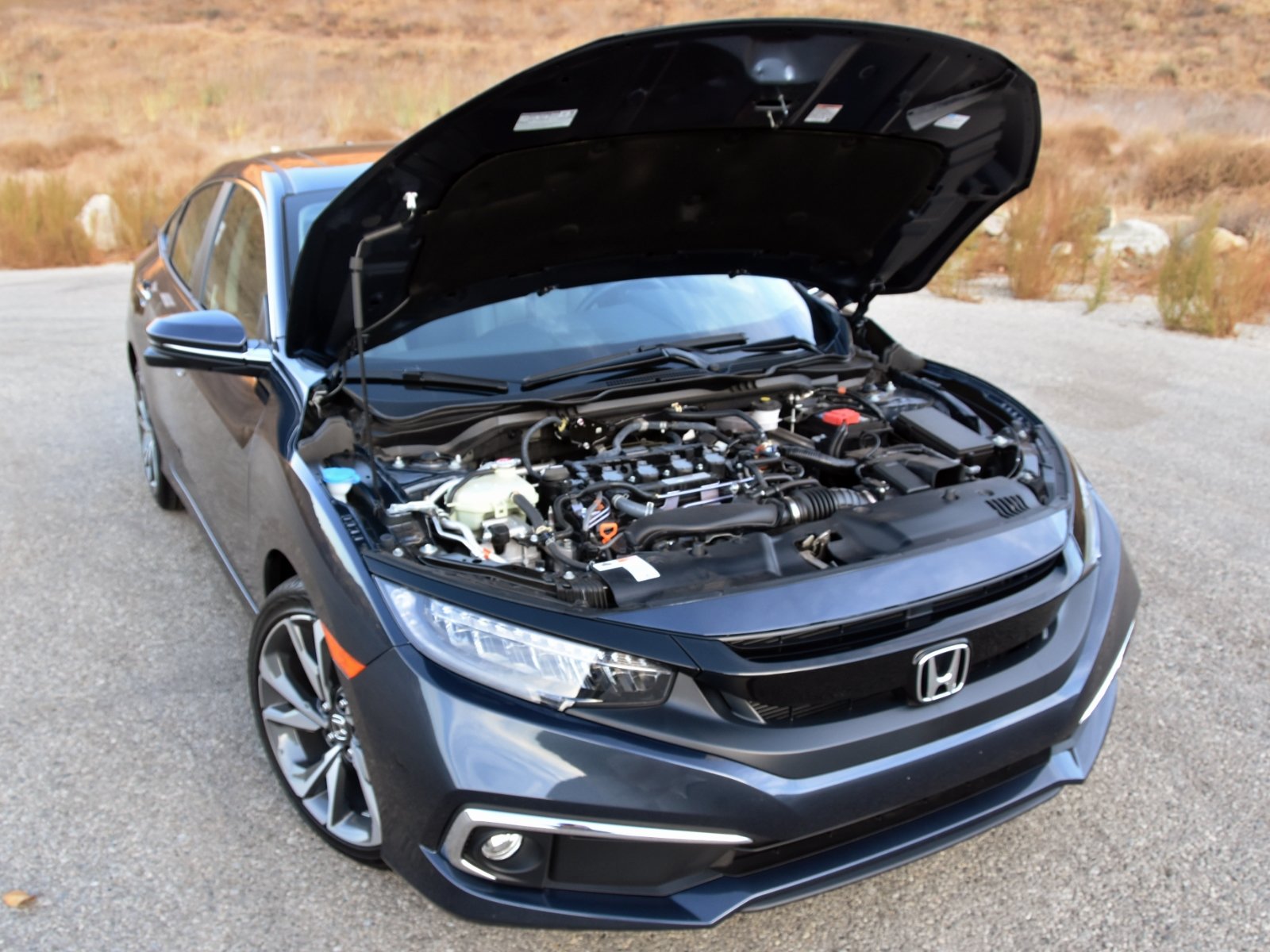 Choose a Civic with LX or Sport trim, and you'll get an adequate 2.0-liter four-cylinder engine good for 158 horsepower and 138 pound-feet of torque. The engine is bolted to a continuously variable transmission (CVT) that drives the front wheels. As long as you never drive a turbocharged Civic, you'll be happy enough with this powertrain.

With a six-speed manual or a dual-clutch transmission, the Civic would be a pure delight to drive. The turbocharged 1.5-liter engine is spunky, the sophisticated four-wheel independent suspension offers uncompromised ride and handling qualities, and both the steering and suspension are a delight. Especially when equipped with the Touring trim's 18-inch wheels (the Sport also has 18s), this compact car is quick, composed, and gratifying to drive.

But that CVT is a problem. First, when you shift into a gear, the lever feels sloppy and unsophisticated, one of the only fundamental flaws inside the cabin. Second, like other CVTs, it can drone. And drone. And drone some more. Third, while the test car had paddle shifters and a Sport mode, they produce frustration with their ineffectiveness rather than satisfaction with their performance.

Still, you can't argue with the fuel economy, and the CVT is due credit for that. We averaged 34.8 mpg on a 140-mile driving loop, beating the EPA estimate of 33 mpg in combined driving. 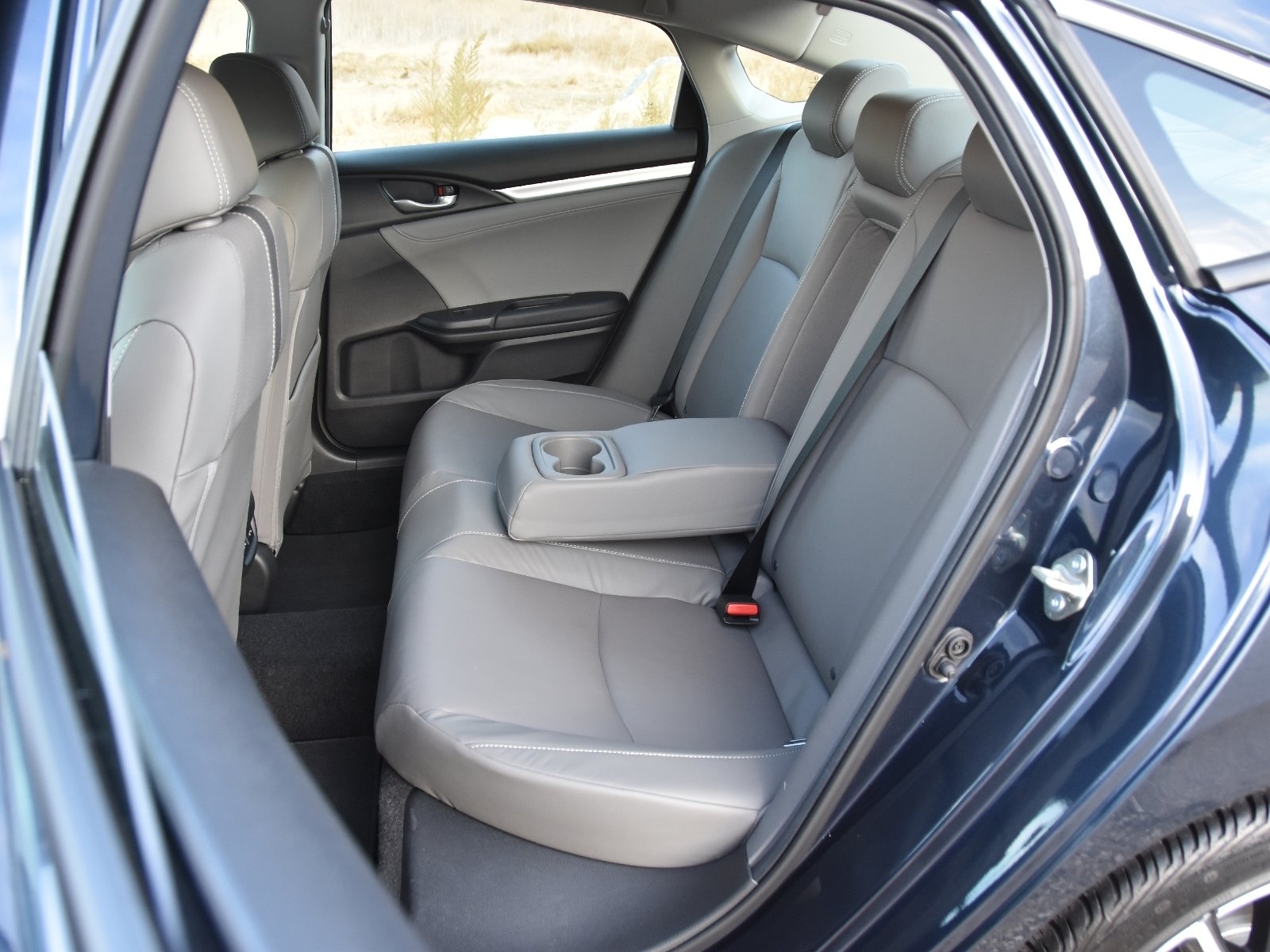 Even for a car, the Honda Civic sedan sits low to the ground, and the seating position seems like it's floor-level. That makes getting into and out of this car an exercise in, umm, exercise. Which, frankly, is probably best for all of us. Work those glutes and quads!

Once you're in, you're going to be comfortable. Unless it's a hot day. And you're stuck riding in the Civic's back seat. Then, not so much, because this car doesn't offer any rear air conditioning vents.

Up front, the driver's seat in most Civics offers eight-way power adjustment, making it easy to find a proper position. The front passenger's seat does not have a height adjuster. Even a manual lever to raise this seat would help when it comes to getting in and getting out of the car. Leather upholstery is standard starting with EX-L trim.

Keeping in mind that a new 2021 Civic is roomy, about the same size inside as a decade-old midsize car, you won't be surprised to find that grown-ups fit in the rear seats without a problem. The seat offers excellent thigh support, too, and the backrest is at a comfortable angle. With some rear air vents, it would be even better, but then you’d probably need to give up some of the center console’s remarkable storage space.

That center console divides the front seats and supplies a downright incredible amount of practicality. From the trays forward of and underneath the shifter to the huge cupholders and deep center bin with a sliding, densely padded armrest, you will not have trouble finding a place to stash your stuff.

The Civic sedan's trunk is huge (for the class) too. It measures 15.1 cubic feet of trunk space unless you get the Touring trim, which has a premium sound system that chews up some space. The Touring provides 14.7 cubic feet of cargo space. 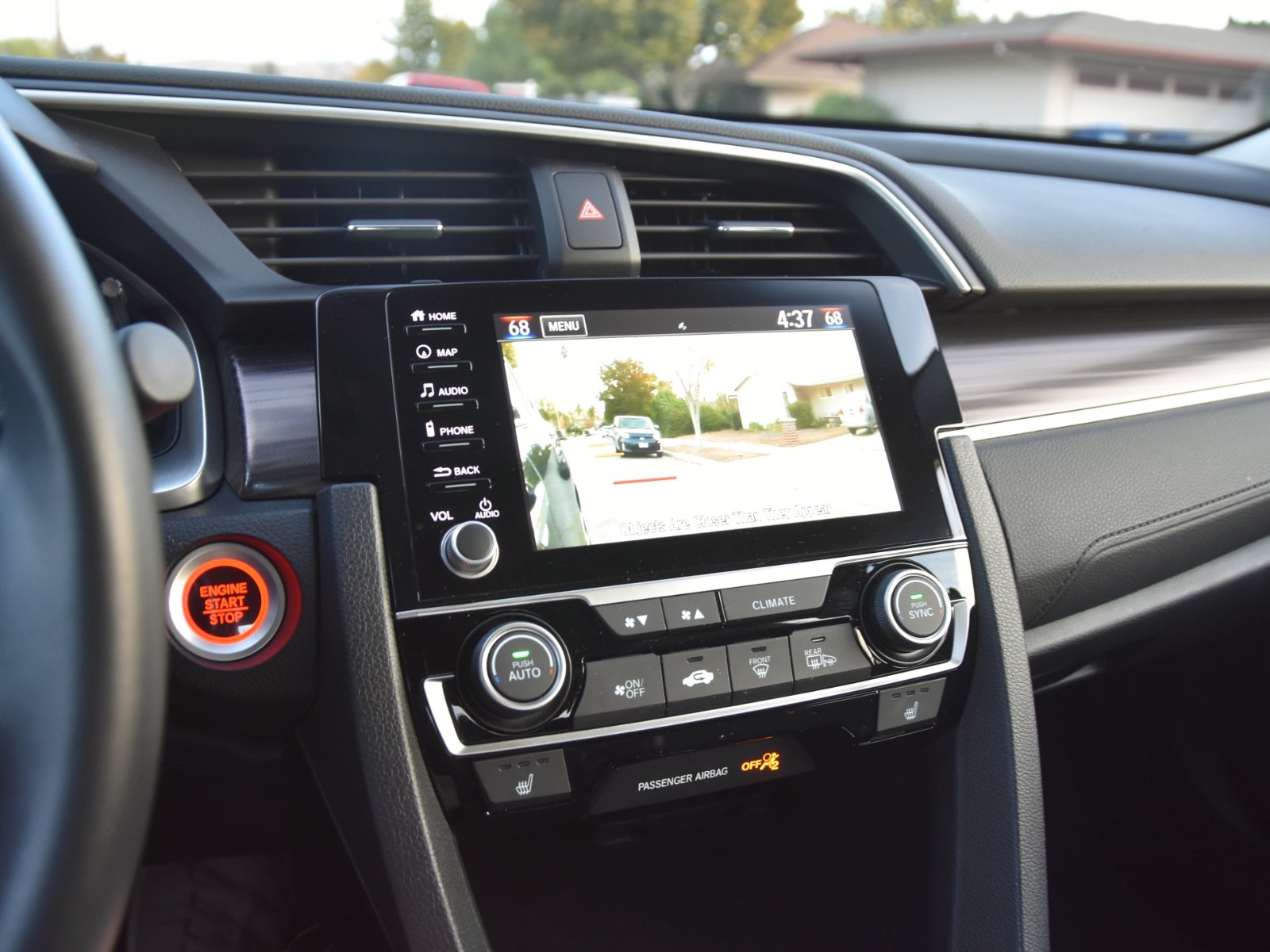 When it comes to technology, the Civic is showing its age. You don't get much with LX trim, aside from a 5-inch LCD screen, Bluetooth, and a 1.0-amp USB port that won't recharge your smartphone anytime soon.

The Civic Sport offers an upgrade in the infotainment department in addition to its 18-inch wheels and cool little center-mounted exhaust outlet. You get the 7-inch high-definition touchscreen, plus an eight-speaker sound system, Apple CarPlay, Android Auto, text-messaging support, basic HondaLink connected services, and a more powerful 1.5-amp USB port.

You'll probably want to run Apple CarPlay or Android Auto for their familiar interface, navigation capabilities, and digital voice assistants. The Touring's voice recognition system is unsophisticated, requiring the driver to use specific prompts to achieve a successful outcome. The premium sound system is nice, but you can make the eight-speaker setup work. 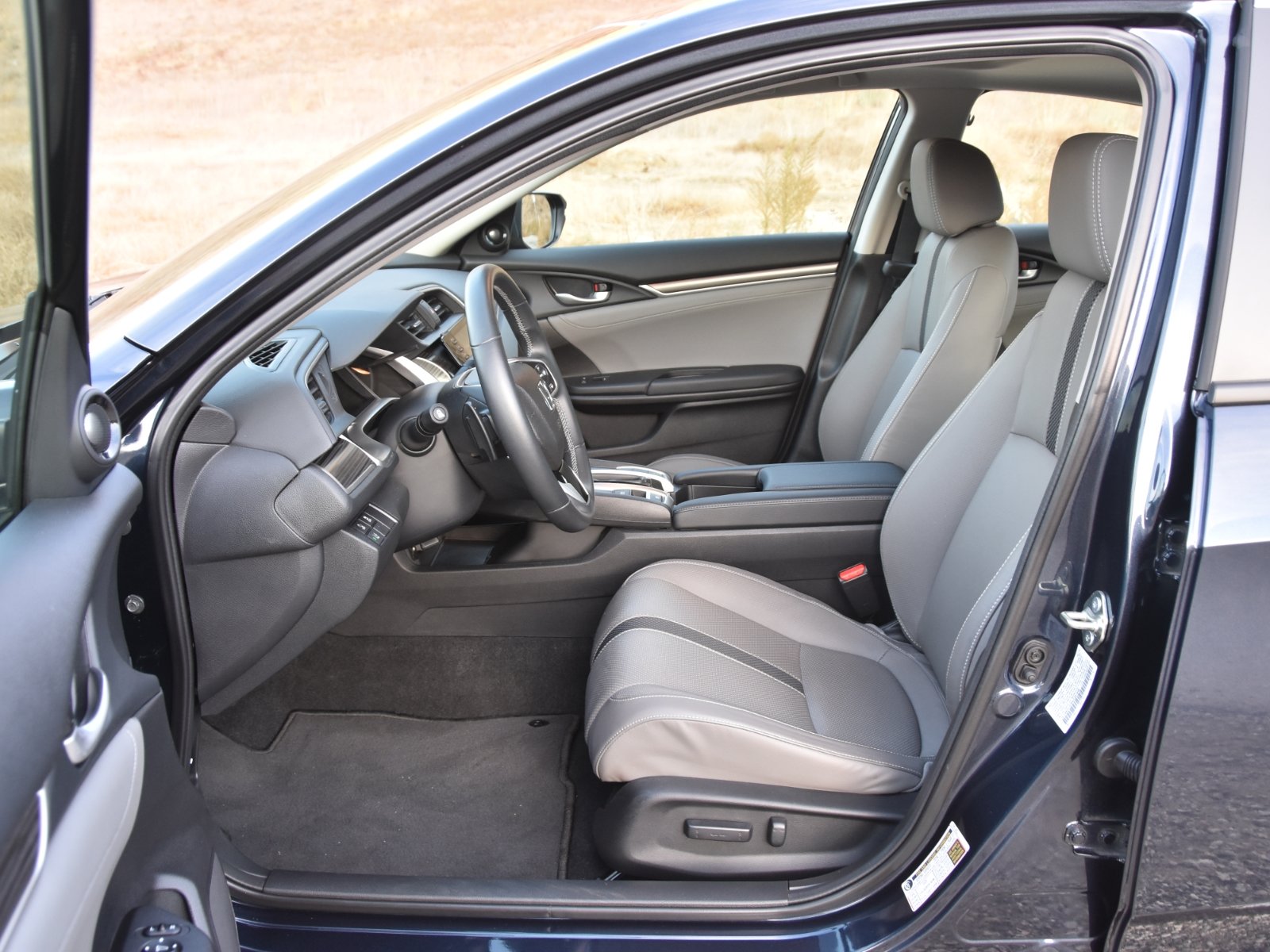 Thoughtfully, Honda equips every 2021 Civic with Honda Sensing. This is the company's collection of advanced driving assistance systems (ADAS).

If you want help checking your blind spots, the Civic offers LaneWatch. Available starting with EX trim, LaneWatch uses a camera mounted to the car's right mirror to monitor the right lane for other vehicles. It shows the live video feed on the infotainment system when you use your turn signal to indicate a planned lane change.

Now, this is problematic for several reasons. First, that camera is susceptible to damage. Second, it forces the driver to reference two completely different locations when changing lanes: the infotainment system and the side mirror. Third, it works only for the right side of the car. What about the left side? Use your mirror.

Furthermore, because the Civic doesn't have a traditional radar-based blind-spot warning system, it does not offer a rear cross-traffic warning system. It does, however, have a 180-degree reversing camera view, which helps to make up for it.

In use, Honda Sensing is effective if unrefined. It can seem abrupt and indecisive at times, which makes it hard to trust the technology. Its behavior can also cause problems with other motorists when you're in traffic. Several Civic competitors, such as the Hyundai Elantra, Nissan Sentra, and Toyota Corolla, have superior ADAS solutions.

Ending on a positive note, the 2021 Civic earns a Top Safety Pick designation from the Insurance Institute for Highway Safety (IIHS). The rating only applies to Touring trim, though, which has the top-rated set of LED headlights.

The National Highway Traffic Safety Administration (NHTSA) gives the 2021 Civic five-star ratings in every single assessment. That's rare. And it means that if you buy your kid a Civic to drive, and an accident happens, you've done the best you can do as a parent: put them into a car that can potentially save their life.

Just teach them how to properly position that left-side mirror for maximum blind-spot coverage. 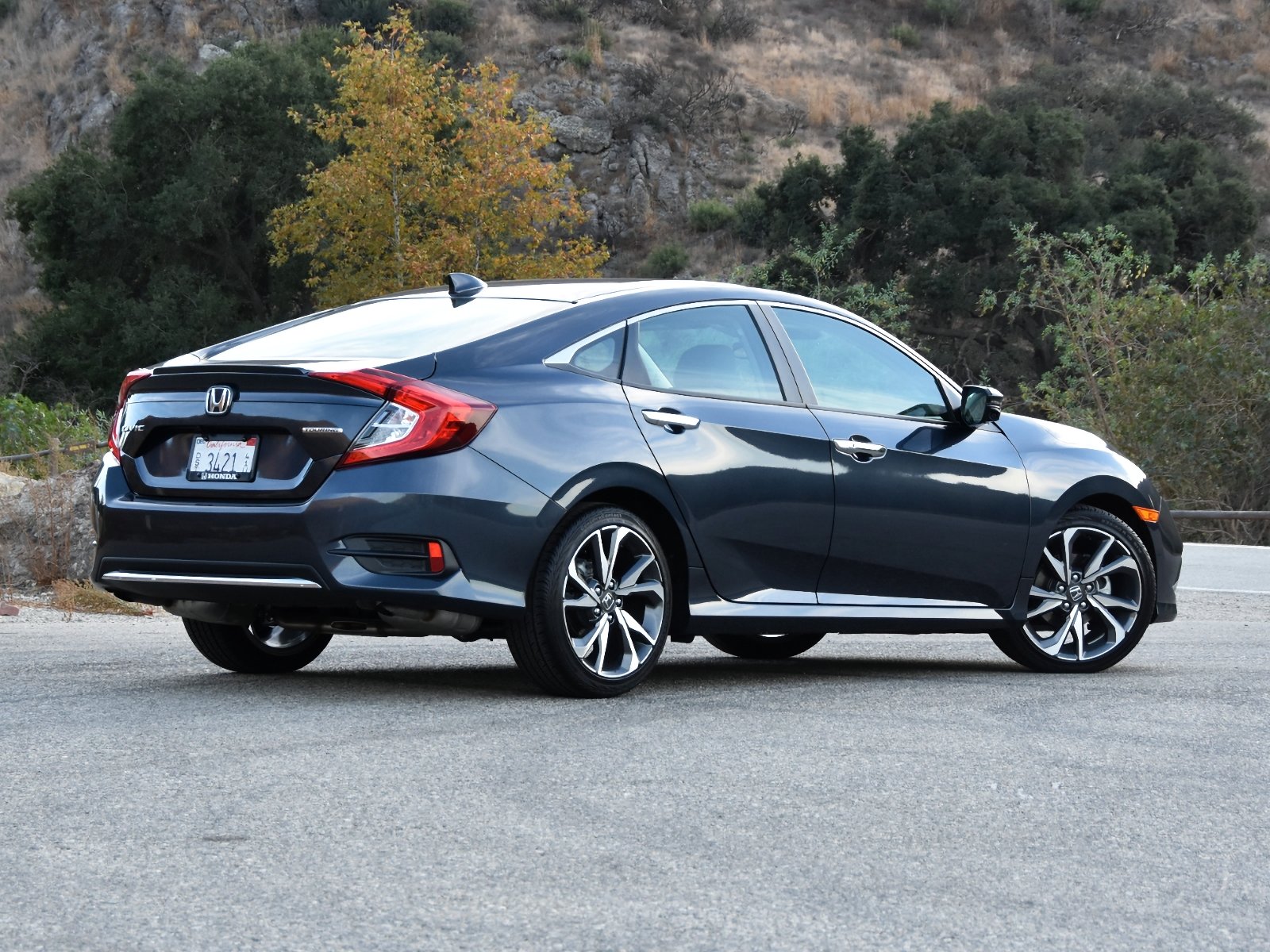 Honda doesn't have any trouble selling Civics. In 2020, it was the best-selling car in America. So there isn't much incentive for the automaker to offer lengthy subscriptions to anything, or decade-long warranties, free maintenance, or big cash rebates. About the only deal you'll get on a new Civic is when Honda needs to clear stock for some reason. And when that happens, low lease payments and long-term low-rate financing move the metal.

From that perspective, no, the Honda Civic is not cost-effective. But because it holds its value so well, the lease deals are terrific. And if you buy one, it won't be hard to sell later. Unless your pets seemingly lived in it. Or you smoked up a storm with the windows up.

From a technology perspective, the competition outclasses the outgoing 10th-generation Civic. But otherwise, this Honda holds its own against an excellent collection of alternative compact cars.

Have you driven a 2021 Honda Civic?
Rank This Car

Enter your zip to see incentives for a new Civic in your area.

I need a new car and am thinking about either the 2021 Honda Civc or Insight. Catalytic converters are often stolen in my neighborhood so I need a car where the catalytic converter is located under...

i forgot how to post add in car gure ,