Looking for a New Honda Accord in your area?

CarGurus has 1,112 nationwide Honda Accord dealers with 8,464 new car listings.

The Honda Accord is one of the bestselling cars in the U.S. for good reason. 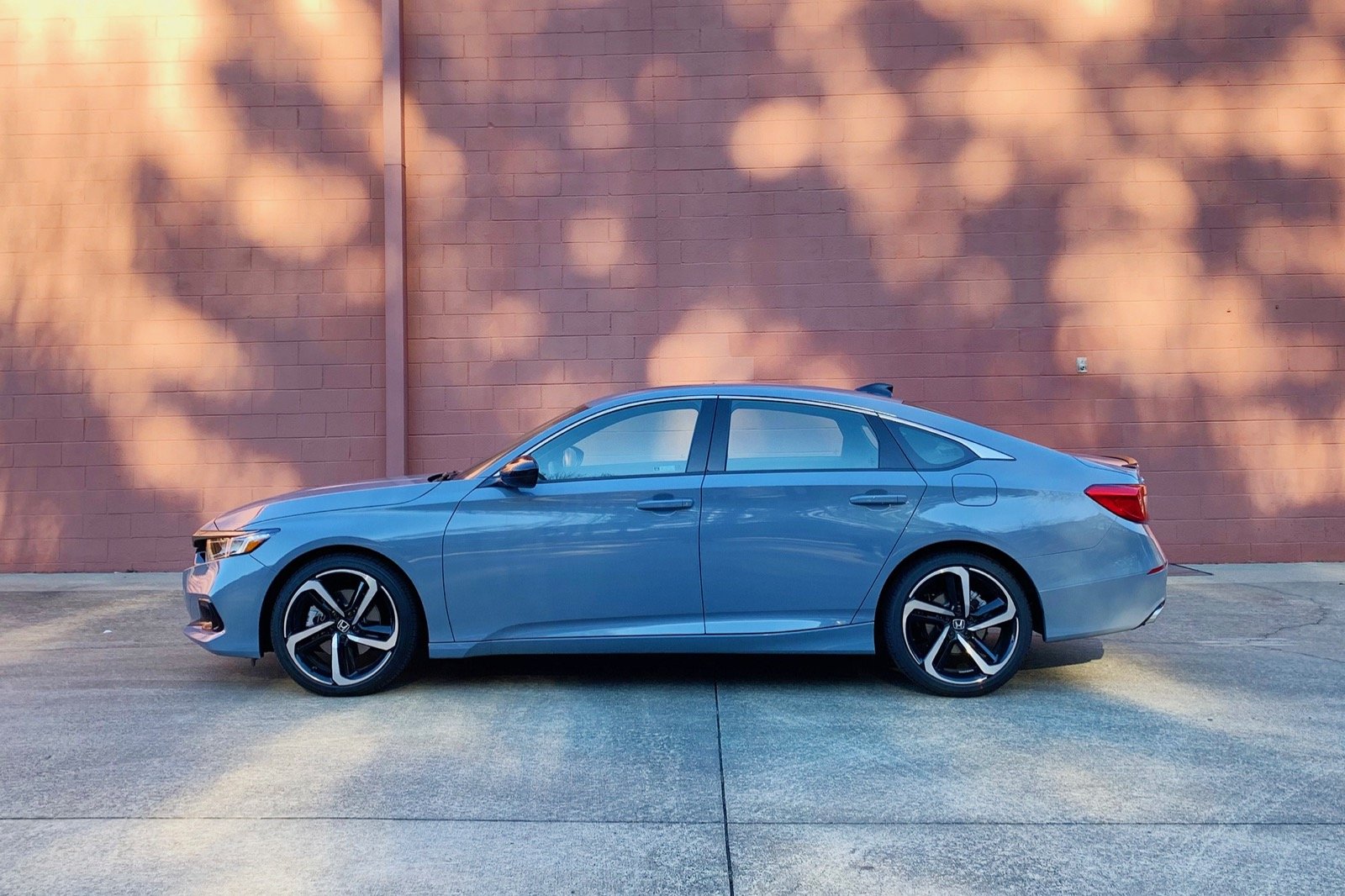 For the 2021 model year, Honda is taking the Accord in a more elevated direction. The company has refined the Accord’s features list, added a trim level, and priced it right to compete against other heavyweights in the industry. Honda has made safety a priority in the 2021 Accord, helping this fresh version earn high praise. 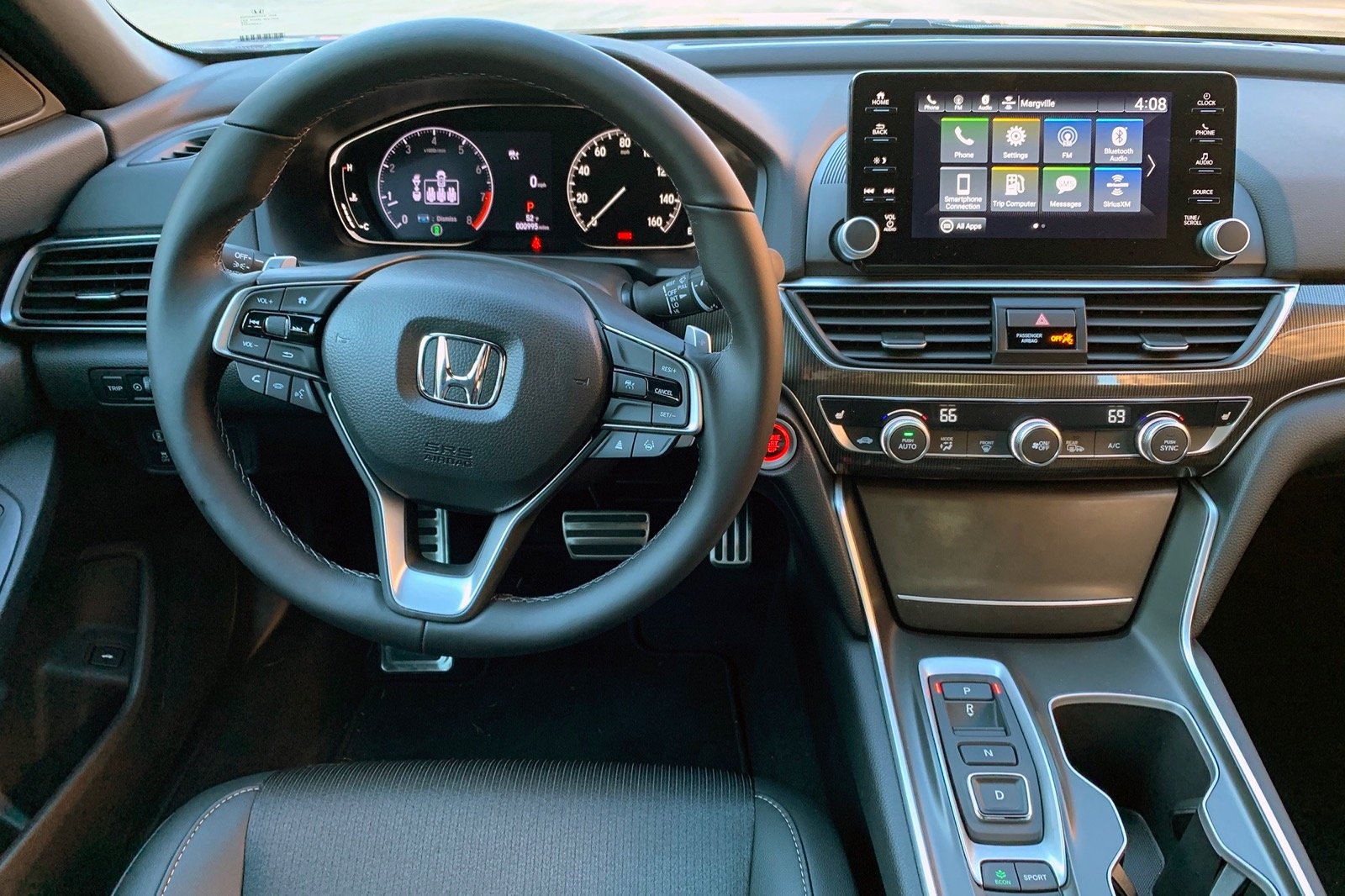 It’s a classic battle: Toyota Camry versus Honda Accord. These days, the landscape is much more varied with the Mazda Mazda6, Subaru Legacy, Kia K5, and Hyundai Sonata all shaping up to be formidable rivals for customer cash. To keep pace, Honda has given the 2021 Accord a mid-generation refresh.

For the 2021 model year, Honda sells the Accord in six trim levels: LX, Sport 1.5T, Sport Special Edition (SE), EX-L, Sport 2.0T, and Touring. Our test vehicle was a 2021 Honda Accord Sport 2.0T. The Accord Hybrid has a different powertrain and other unique features. We cover that in a different review.

For 2021, Honda has given the Accord fresh styling in the shape of a wider, restyled grille. The result is a flatter but more sculpted face that doesn’t have the waterfall effect of the previous model year. The Honda Sensing safety system’s radar unit is better disguised with the revision and doesn’t detract as much from the appearance of the vehicle as it once did.

All Accords but the base model come with LED headlights and lowlights that flank the grille. Their point of illumination is longer and wider than the previous model year’s allowed, resulting in good visibility at night. The car’s fog light openings have also gotten smaller for 2021 giving the car a more sophisticated and cohesive appearance.

The Accord LX, EX-L, and Touring get new alloy wheel designs for 2021. The base model Accord LX has 17-inch wheels. All other models have 19-inch wheels with unique designs for nearly every trim level—Sport and Sport Special Edition share a design. All wheels come from the factory wrapped in all-season rubber.

Honda has made a new Sonic Gray Pearl paint job available for Accord Sport, Sport Special Edition (SE), and Touring models. The color, which has a touch of a blue hue in the sunlight, is attractive and unique in the segment.

Accord LX and Sport have cloth seats while the Sport SE has leather-trimmed seats and the interior of upper models is fully leather-trimmed. Even in lower trim levels, the interior of the Accord looks more sophisticated than the Camry’s. The cloth appears to be high-quality and doesn’t immediately appear to be a budgetary compromise.

A power moonroof is available on the Accord EX-L, Sport 2.0T, and Touring 2.0T. Opting for the moonroof cuts headroom down by two inches for front-seat occupants, something that is standard for the industry.

The interior of the Accord is at least as nice as what’s in the new K5, though its Touring grade doesn’t quite reach the premium level heights that the top-tier Mazda6 Signature model does. Then again, if you want a more high-end Accord with more power and the latest and greatest tech, you’ll want to cross-shop Honda’s premium brand, Acura. To their credit, Honda has made a distinction between the two with materials choices, design, and that won’t leave you wondering if it’s just better to get a high-grade Honda over a mid-grade Acura. 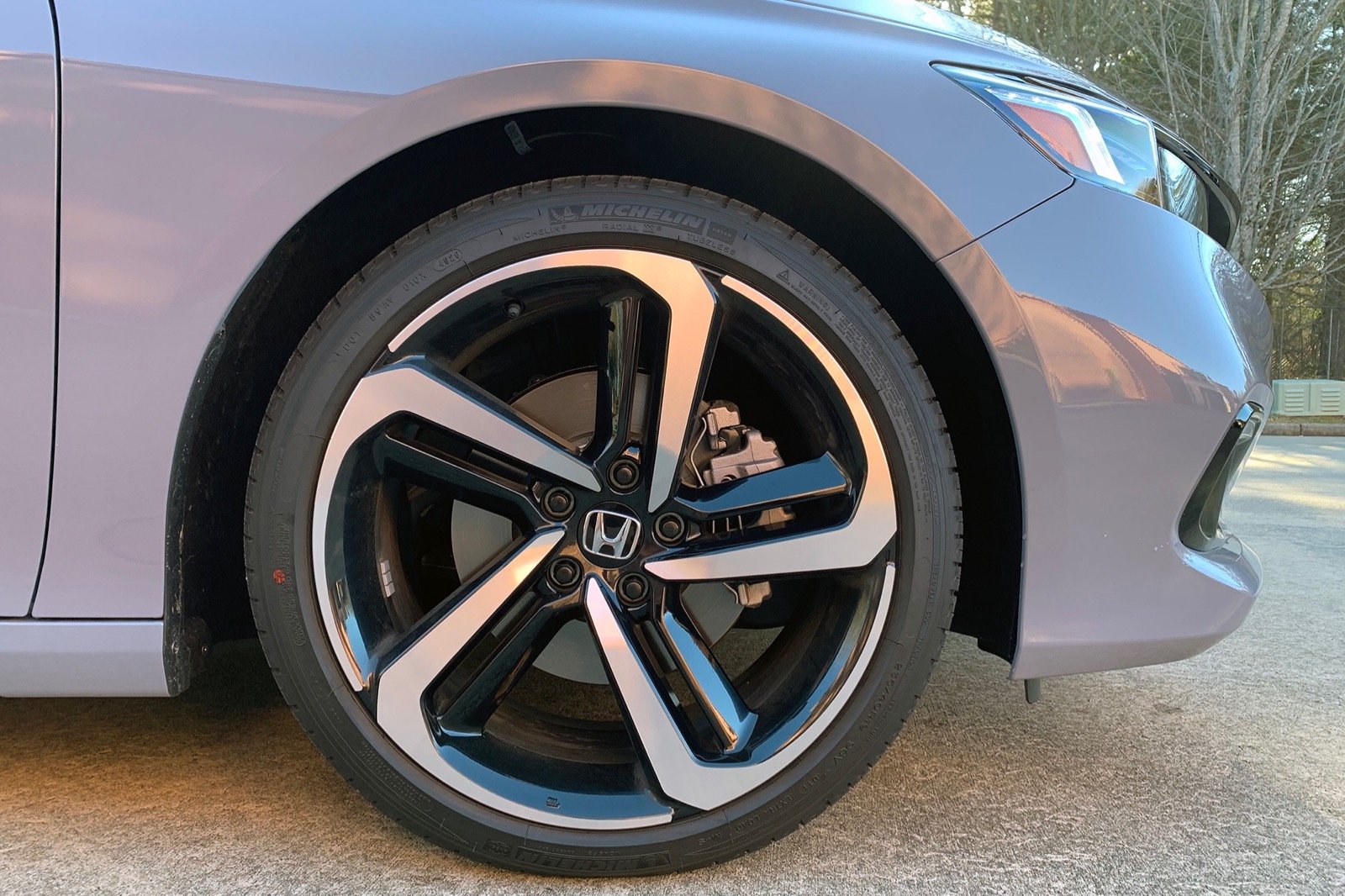 Honda gives buyers the choice of two engines in the Accord and makes them available depending on trim level. A 192-horsepower turbocharged 1.5-liter four-cylinder engine is standard on the Accord LX, Sport, Sport SE, and EX-L trim levels. It delivers 192 pound-feet of torque and is paired with a continuously variable transmission (CVT). For 2021, Honda has improved the Idle Stop performance of the engine to make it start up faster when the driver releases the brake.

A more powerful 2.0-liter turbo-four is paired with a 10-speed automatic transmission and produces 252 hp and 273 lb-ft of torque. It’s available in Accord Sport 2.0T and Touring grades. Both engines run on regular unleaded fuel.

Between the two engines, the 2.0-liter is far more fun to drive, but the smaller one is more than capable of getting the job done as a daily driver. Again here, Honda has done a good job differentiating the Accord from the Acura lineup, making its drive dynamics not nearly as athletic but still engaging, while allowing for pointed steering and easy maneuverability. Acceleration won't knock anyone's socks off, but that's not a reason to ignore the Accord.

The Accord Sport and Sport SE have paddle shifters, which work better for mountain driving situations than they do for deriving true sport functionality, as you would get with a manual transmission.

Honda has also upgraded the braking system for 2021, designing it to engage more smoothly, especially at low speeds. The result is measured performance that is neither grabby nor soft. 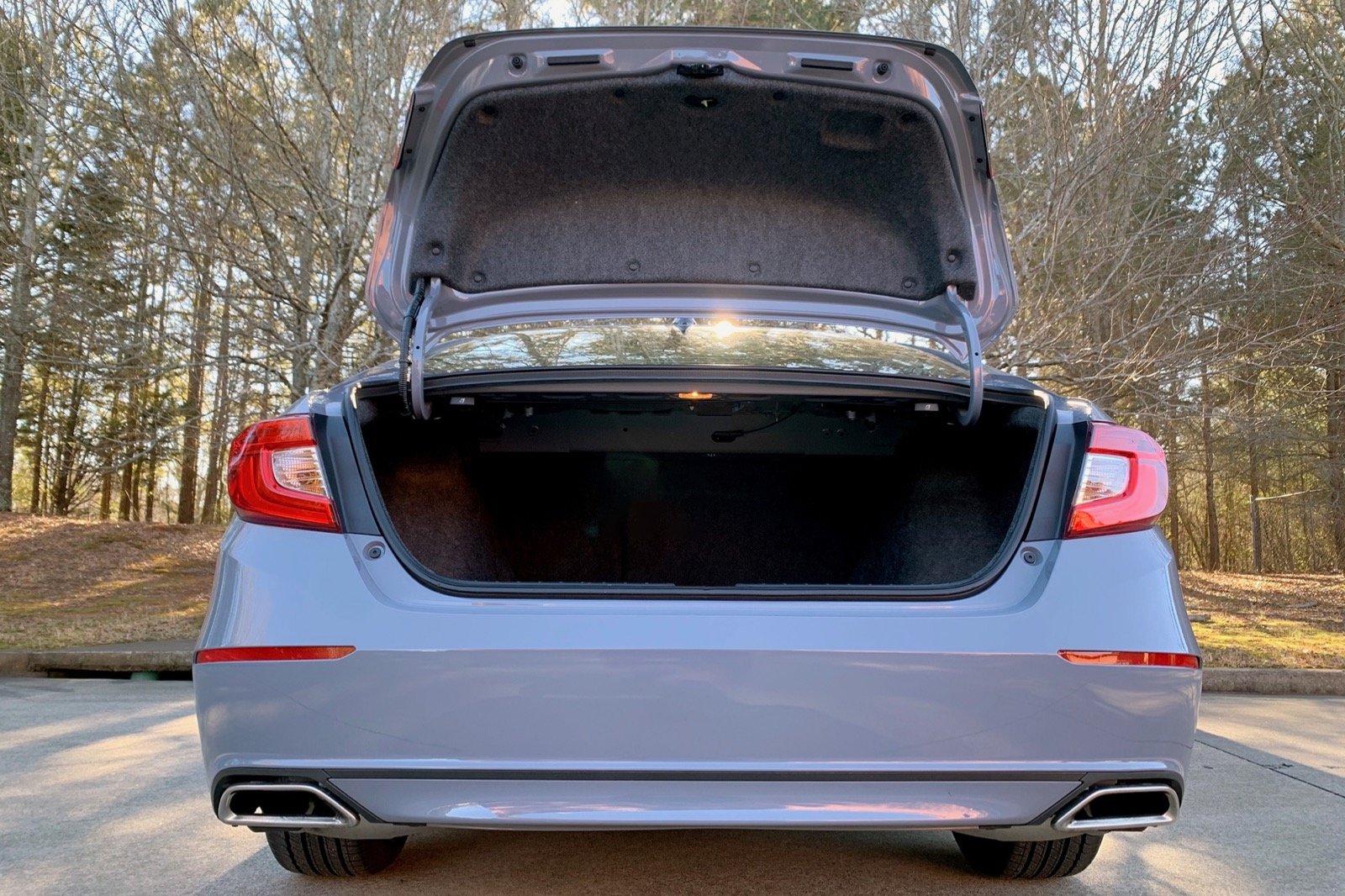 The Honda Accord was designed for daily drivability—and it shows. It is equal parts stylish and practical, with seating for five, with adults able to comfortably sit in the rear seats. Head-, hip-, and legroom is good in the front row, even for larger occupants, in both the front and back seats.

There’s a fair amount of convenience features that come standard on the Accord—dual-zone automatic climate control, auto up/down power windows, push-button start, and front and rear 12-volt power outlets. This leaves the biggest difference between the trim levels to interior appointments, in-cabin technology, and the engine.

In Accord Sport and up, there’s a leather-wrapped steering wheel as standard. Accords powered by the 1.5-liter engine also have a leather-wrapped shift knob while the others have Honda’s push-button/level pull shift system. Top-tier Accords and the Sport SE get two-position seating memory and heated seats while ventilated seats are only available on the Accord Touring 2.0T trim level.

Rear seats feature a 60/40 split and center armrest. They fold down to allow pass-through from the sizeable trunk. The Accord’s 16.7 cubic feet of cargo space in the trunk alone is better than what most midsize sedans offer.

The cabin of the Accord is well-designed so that all the essential knobs, buttons, wands, and levers are all within easy reach of the driver with the infotainment system easily accessible by both the driver and front-seat passenger.

Small-item storage isn’t great in the Accord, but it’s better than what you’ll find in some sedans. At the front of the center console is a small cubby that serves as a gathering spot for various bits and bobs, or in higher Accord grades, it’s where the wireless phone charger sits. 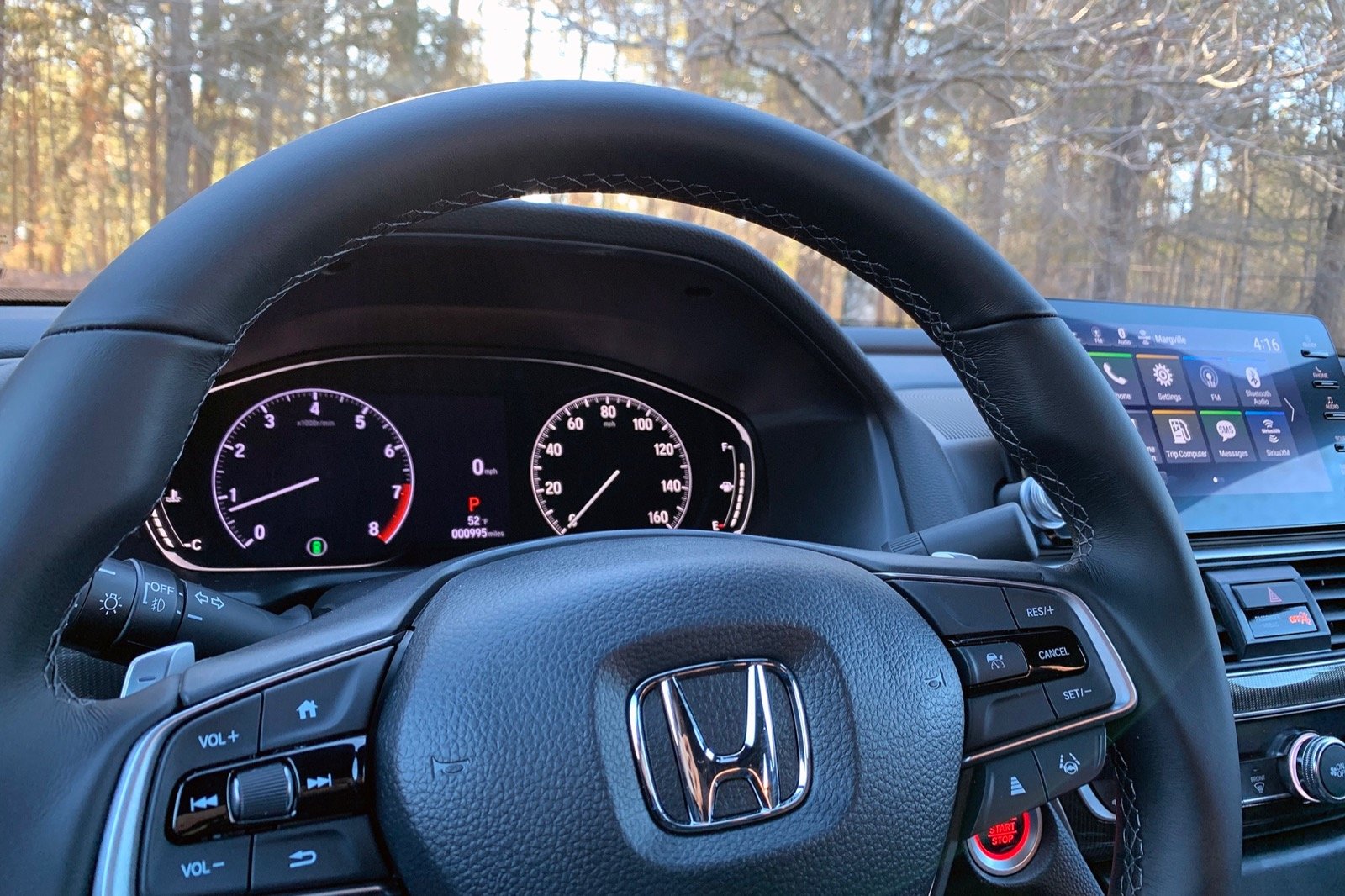 Buying a Honda Accord does not mean that you have to compromise on technology. An 8-inch infotainment touchscreen rests on the dashboard of each Accord with physical volume and tuning knobs on either side. The screen is properly responsive to touch commands and its operating system looks attractive. 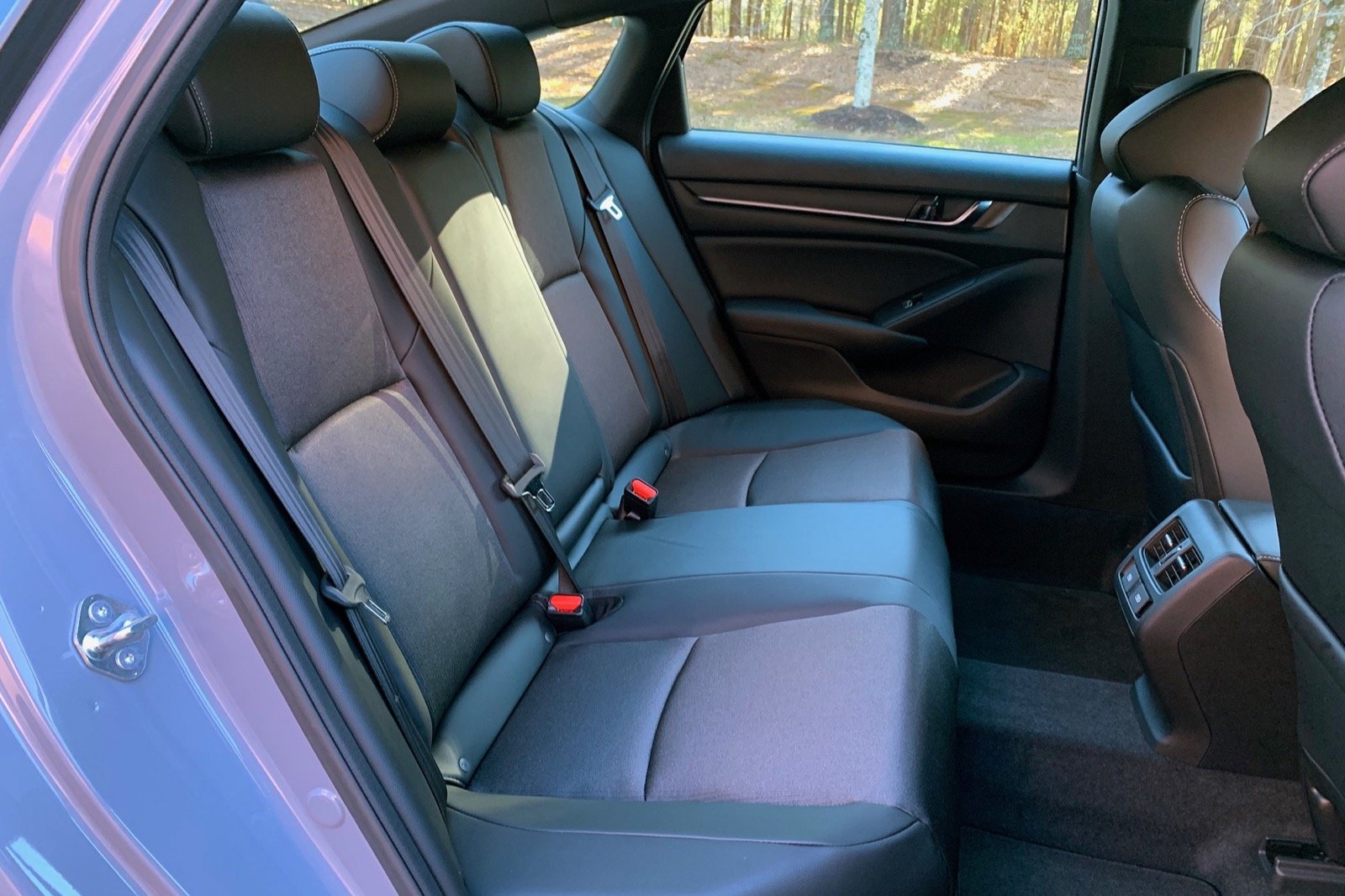 Honda takes safety very seriously. The company has a long track record of equipping vehicles with physically and technologically advanced structures and equipment that work in tandem to keep families safe. The Accord is no exception.

Every Accord comes standard with a long list of safety features that includes vehicle stability assist with traction control, brake assists, a rearview camera, LED daytime running lights, and automatic high beams. There’s also a standard Honda Sensing suite of driver-assist and safety technology that includes lane-keeping assist, adaptive cruise control, traffic sign recognition, and automatic high beams. Moving up in trim levels gets you rear-seat reminder, low-speed braking control, and blind-spot monitoring with cross-traffic alert. Body-colored parking sensors come on the Accord EX-L and Touring 2.0. The EX-L trim gets two in the front and four in the rear while the Touring model gets four in each area.

The Insurance Institute for Highway Safety (IIHS) has given the Accord its highest rating—Top Safety Pick+. The car’s standard front crash prevention system, which includes automatic emergency braking and forward-collision warning, earned the organization’s top Superior rating for vehicle-to-vehicle and vehicle-to-pedestrian crash avoidance.

The National Highway Traffic Safety Administration (NHTSA) has given the Accord a five-star overall safety rating. It received the highest ratings – five out of five stars – in all crash testing scenarios.

There are two complete sets of LATCH connectors for child safety seats in the rear of the Accord, one on each outboard seat. 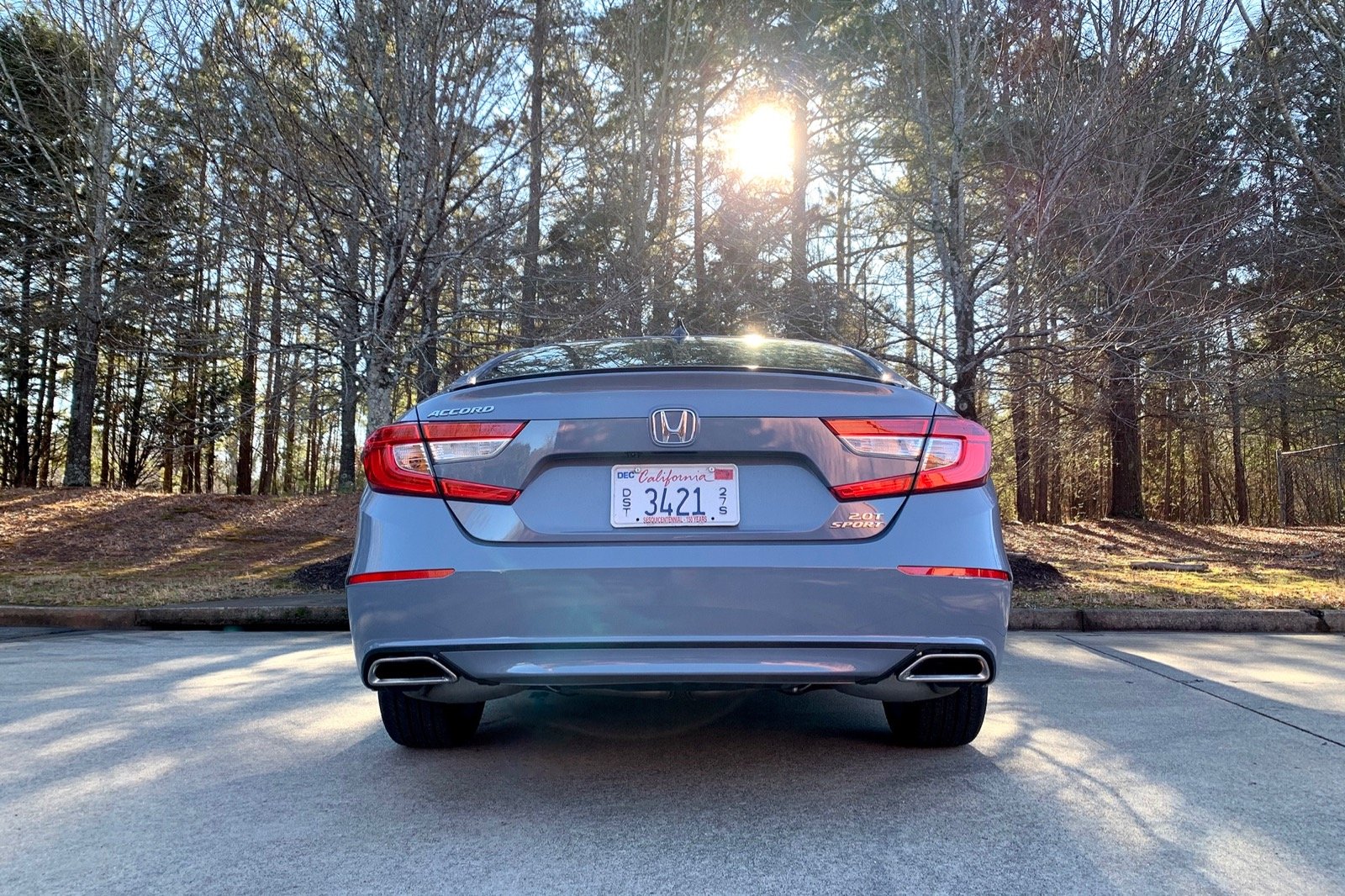 The Honda Accord LX starts at $24,970 and goes up a few thousand dollars per trim level as you make your way up through the grades, settling in at $36,900 for the fully equipped Touring trim. Adding the 2.0-liter engine to models it is not traditionally in will add $4,530 to the cost of the car.

Honda’s MSRP structure seems fair. Pricing for the Toyota Camry and Camry Hybrid, which delivers similar features and power, is just about even with the Accord. The more powerful Kia K5 is cheaper on the top end but doesn’t have all the tech features the Accord does.

The Mazda6, which has that premium interior follows the same pricing structure as the Camry, Accord, and Kia, topping out slightly lower than the Accord. However, the Mazda’s infotainment system leaves a lot to be desired.

If you're shopping for an AWD sedan, you'll want to cross-shop the Nissan Altima, which was redesigned a few years ago and offers impressive fuel economy, a well-appointed interior, and the available drivetrain. The Subaru Legacy comes standard with AWD and has a far larger infotainment touch screen than the Honda. It also has Subaru's EyeSight suite of driver-assist and safety features as standard equipment.

What it comes down to for the Accord buyer is where their priorities are. Is it with pricing or power? Not getting the larger engine will save some dough. Opting for the similarly priced Accord Hybrid ($26,570-$36,440) will save on fuel, but sacrifice some power in the process.

Guru9HP7RZ I own the 2021 2.0t Touring with 700 miles and thus far I am occasionally getting hesitation when moving at stop sign, traffic lights and entering into traffic which is dangerous! I would never have purchased it had it happened on test drive. I am taking it back to the Honda Dealer next week for checking to see why. If it cannot be remedied, I intend to file under the Texas Lemon Law! I believe it may cause rear end or side collision with other cars!

Have you driven a 2021 Honda Accord?
Rank This Car

Enter your zip to see incentives for a new Accord in your area.

Cars compared to 2021 Honda Accord

ACC System Problem, As Well As Adaptive Cruise Control And Engine Idling Is...

I purchased a Honda Accord Hybrid (2021) And It was having issues with the ACC, (Cruise Control) And with the lane assist. Small things that would be odd but not too terrible. The engine was also i...

Why Aren't All Dealerships On The Site

I have noticed that some vehicles at dealerships aren't on your site. Some of the prices were lower than you are advertising.

2021 Honda Accord Trims For Sale