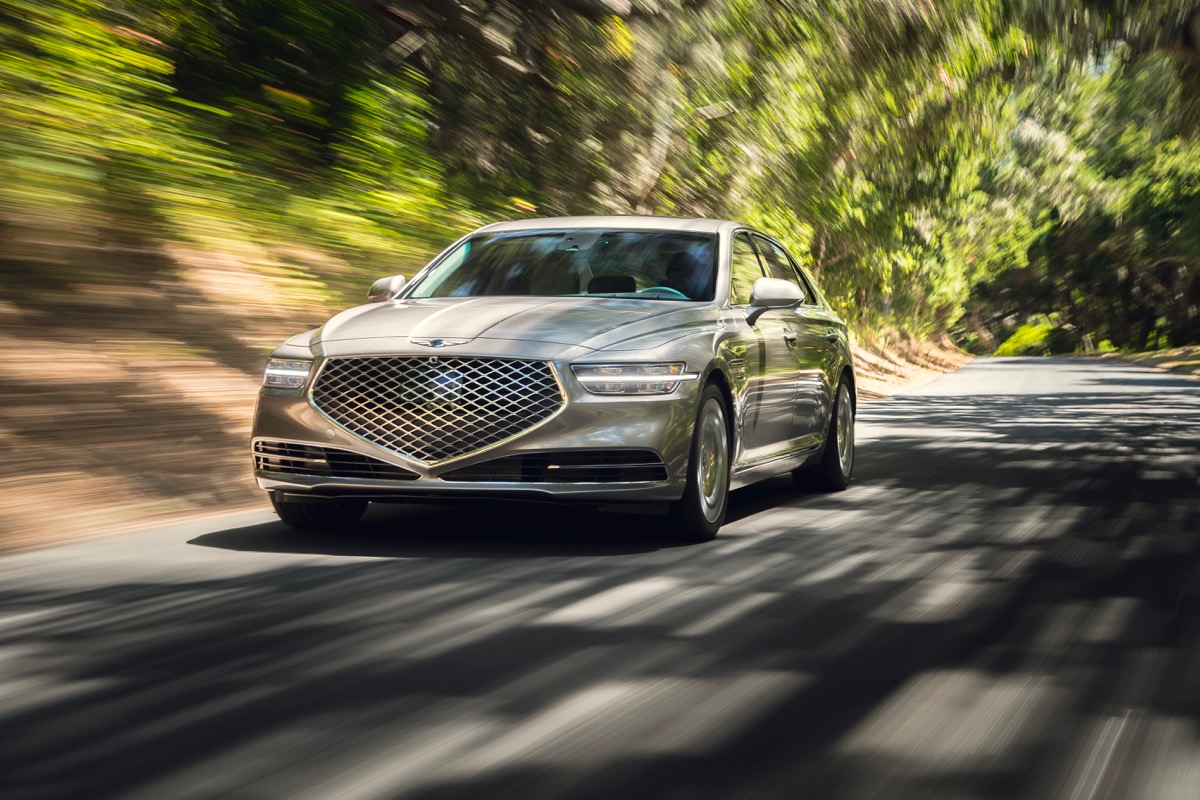 The full-size luxury sedan market has all but evaporated, but the Genesis G90 gives a lot of reasons to buck the trends. 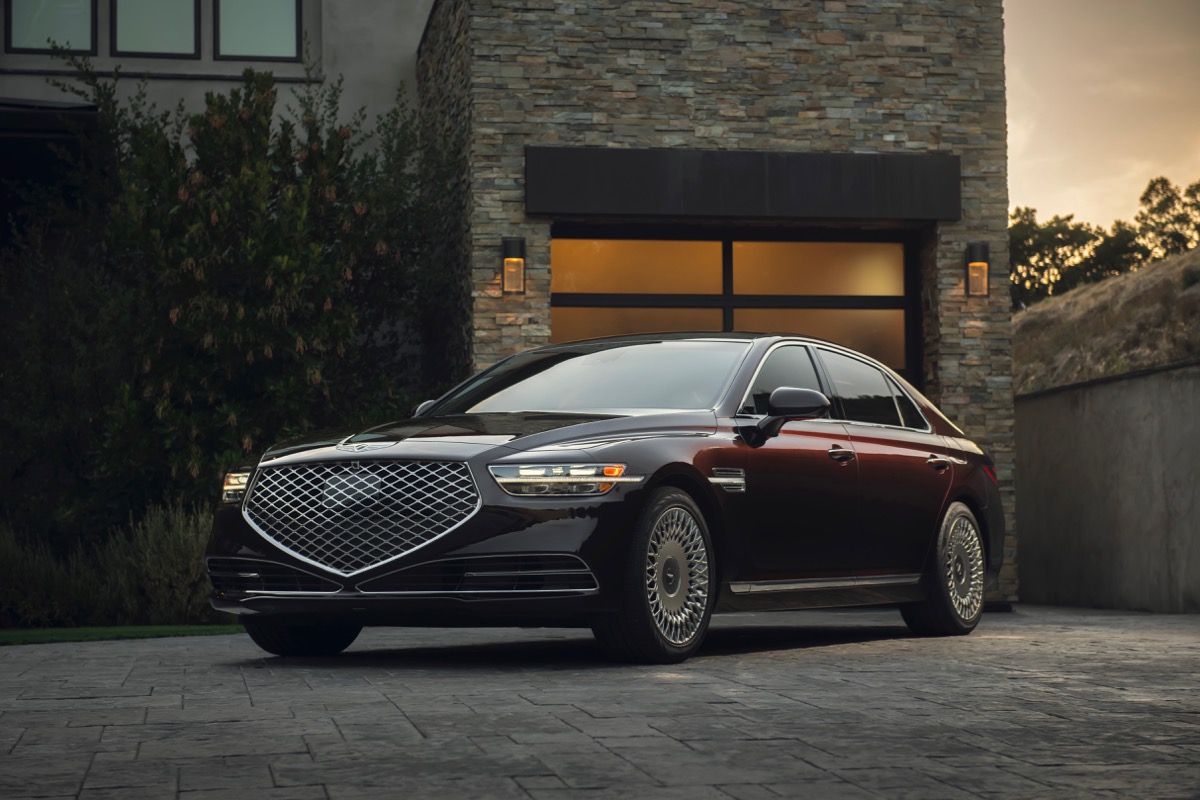 In 2006 BMW sold 17,796 7 Series sedans. Audi sold over 5,000 A8s. Mercedes-Benz delivered 30,866 S-Class cars. Today, that market has evaporated. Every manufacturer has seen sales retract by at least half, and it’s more just than the pandemic driving that recession. There haven't been more than 3,500 customers per year buying Audi A8s since 2016.

And then there’s Genesis. A few years ago, this newcomer launched the G90, the very type of car that American consumers have been staying away from in droves. It’s not like G90 sales have set the world on fire since then, but Genesis went from launching as a new brand to outselling Audi’s flagship A8 in 12 months. These cars have presence, they have power, they’re every bit as luxurious as the European imports, and—very importantly in this class—they have presence on the road.

The biggest thing keeping more people from buying one of these cars? The Excel that Genesis parent Hyundai sold back in 1985. Every single time we drive a G90, average bystanders will rave about how great it looks, be shocked about how well it drives, and then in the same breath say “$75,000 for a Hyundai? Forget it.”

It’s time to realize that almost four decades after the Excel, Hyundai is capable of building a world-class automobile. 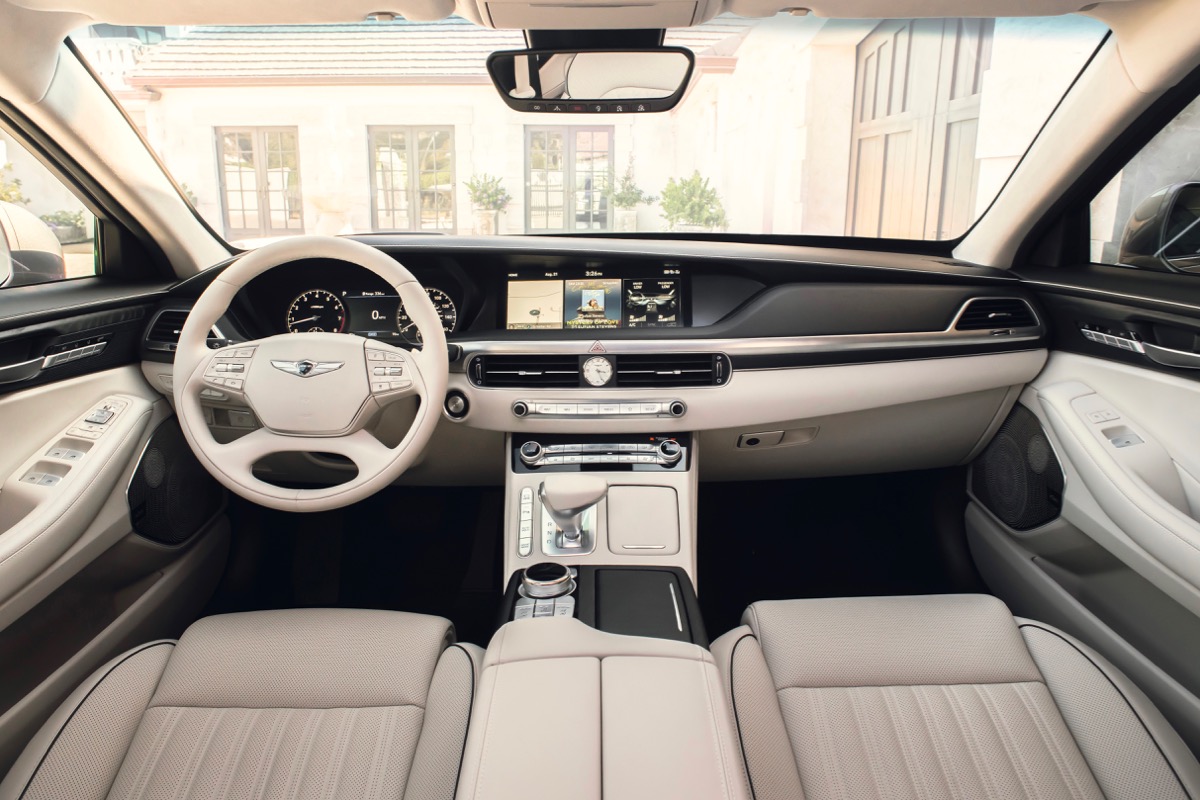 From the outside, the G90 is a fantastic looking car. Long and low, with a diamond-shaped grille and massive lace alloy wheels, the G90 is unmistakable. You won't confuse this car for a BMW 7 Series or a Mercedes-Benz S-Class. It shares a strong family resemblance with the Genesis G70 and G80 sedans, but the G90 is a thing unto itself. Even non-car people have a tendency to stare a bit too long.

There are no options other than the color, the powertrain, and the wheels. You have the option for the 19-inch dish wheels or the 19-inch multispoke alloys. So you get what you get with the Genesis G90 and that extends to the interior. The seats are glorious, with quilted Nappa leather seatbacks that flow into pleats on the seat bottoms. Naturally, they’re heated and cooled, regardless of which of the four available powertrain options you choose. Color options allow for carpet colors that contrast with the upholstery for a premium look.

The front seats are separated by a wide center console that houses a console door split down the middle, the gearshift, the infotainment dial, cupholders and a covered space big enough for a phone. Along with the 12.3-inch display, the G90 has redundant controls for the audio and climate control functions in the center stack. The instrument panel is digital, with clocks separated by a customizable center section.

As nice as the front seats are, they're penalty boxes compared to the back seats. Each G90 has two chairs for rear passengers that recline, offer footrests, and even control the position of the front passenger seat for extra legroom. The rear passengers have a command center between the two seats that controls climate and rear seat entertainment functions, along with comfort settings for the chairs.

Again, this is every G90 we’re talking about, not just an exclusive trim. For a lot of this equipment you’d have to buy a $100,000 car from some of the German competitors, and most of it isn’t even available on the rival Lexus LS. 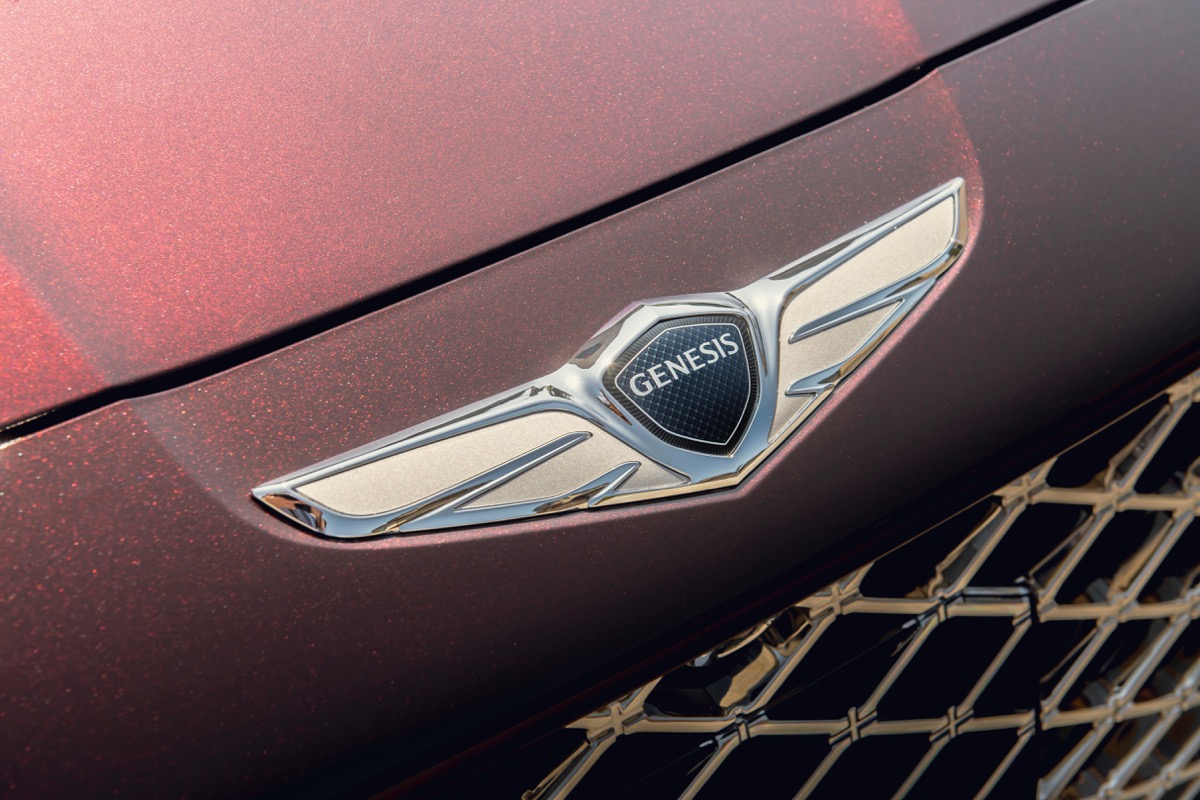 There are four basic driveline options with the G90: the 3.3-liter twin-turbocharged V6 with rear-wheel drive (RWD) or all-wheel drive (AWD), or the 5.0-liter V8, again RWD or AWD.

The V6 is an amazing engine that is particularly well suited to this car. It offers 365 horsepower and 376 pound-feet of torque. The 5.0-liter V8 originally debuted in the Kia K900 luxury car, and it was one of the most glorious V8 engines we sampled at the time. It provides 420 hp and 383 lb-ft of torque.

All Genesis G90s feature an eight-speed automatic transmission. Adding AWD to either the V6 or the V8 results in a $2,500 upcharge.

You wouldn’t think a twin-turbo V6 with this output could move a nearly 5,000-pound car quickly, but when Motor Trend tested a RWD example last year, they saw 60 miles an hour in 5.1 seconds, which was within tenths of a second of the V8 with RWD. Adding the extra weight and moving components of the H-TRAC AWD system is going to add a few tenths to both 0-to-60 times.

Some versions of other full-size luxury sedans are quicker. BMW says its AWD 750i xDrive will do 0 to 60 in 3.9 seconds, while Mercedes quotes 4.4 seconds for its AWD S580 4Matic. But you could buy two fully equipped G90s for the price of either German sedan and still have enough money left over to buy two Ducati Supersport 950s and go 0 to 60 in less than 3.5 seconds. 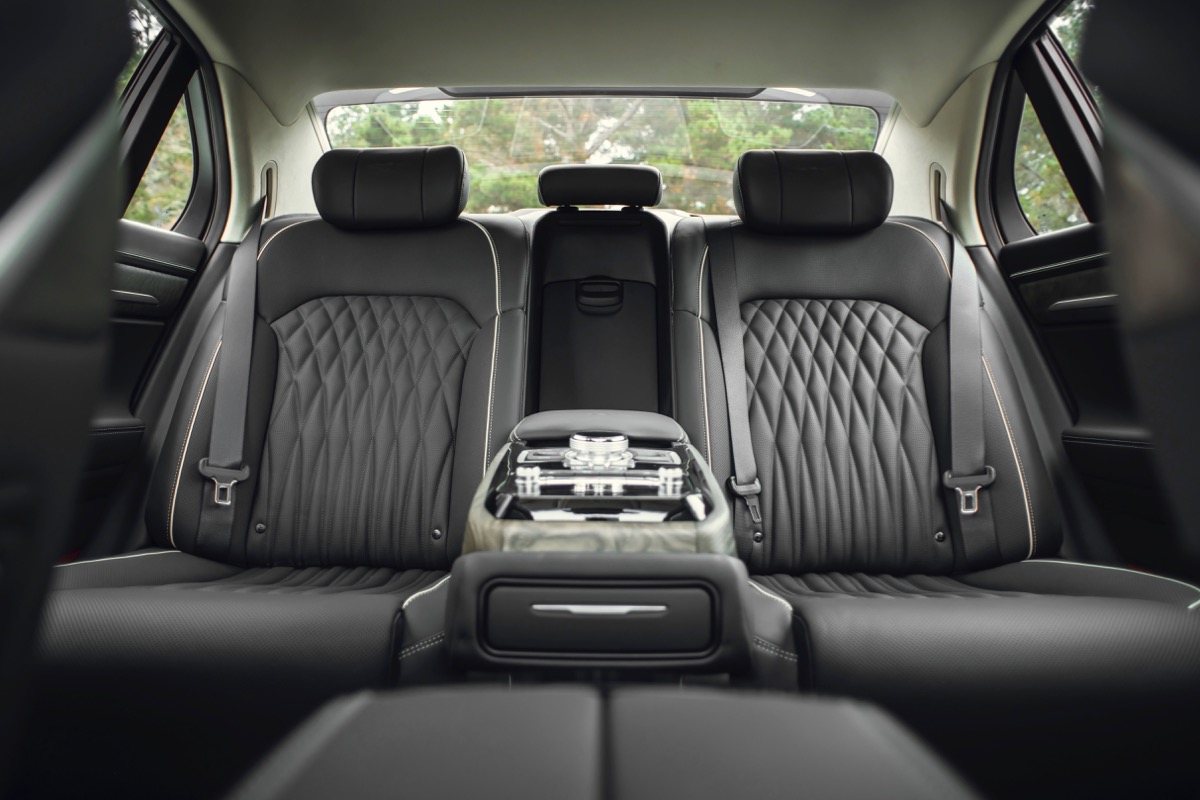 All of the G90’s controls are intuitive and laid out well, which is more than you can say for the Mercedes S-Class' ridiculously frustrating gearshift doohickey, which is exactly the same size and shape as the wiper stalk on any other car.

Every time it rains, you’ll mistakenly slip an S-Class into neutral. The center dial on the G90 that controls infotainment functions is okay, as far as those things go. It takes a bit of getting used to, but once you do, you can avoid taking your eyes off the road. It’s at least better than a touchscreen, and there are still redundant controls for the most-used functions.

The one knock on the car is that you’ll see a lot of switches that are also at home in the cheapest Hyundai product. That’s also true of the Audi A8 and certain Volkswagen products, though. It shouldn’t prevent you from enjoying the car.

Trunk volume is a bit smaller in the G90, though. The Genesis offers 15.7 cubic feet to Lexus’ 16.9 cubic feet. Genesis Owners Forum members complain a bit about not being able to fit three golf bags in the trunk of a G90 without lowering the rear seatback. 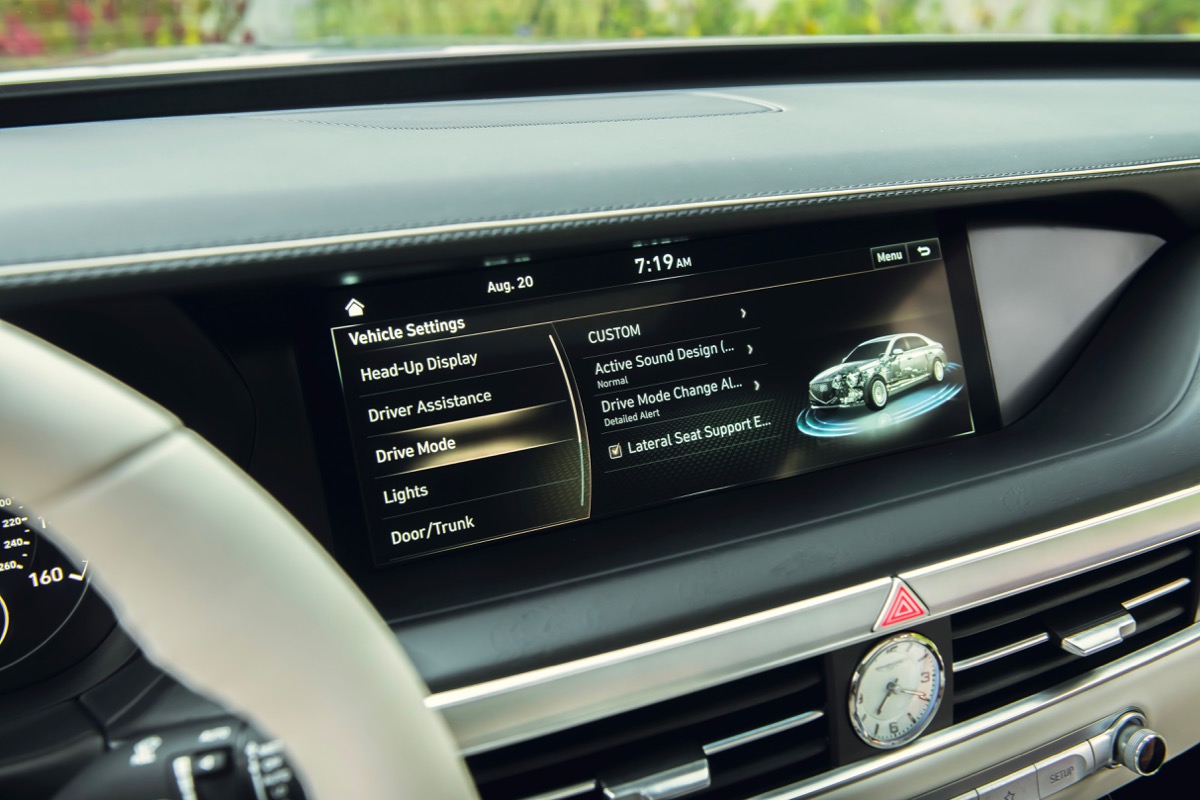 All infotainment functions are managed through a 12.3-inch HD screen. It’s worth mentioning that the interface hasn’t changed much since the G90 debuted in 2015. This screen is still accessed through the console-mounted knob, rather than the touchscreen you’ll find in most other luxury cars. Whether you think that’s a bad thing or not is a matter of taste. Trying to turn the heated seats on via a touchscreen at highway speed is most likely why automatic emergency braking exists.

The infotainment system is dominated by a Lexicon 17-speaker audio system with QuantumLogic surround sound—ostensibly “perfectly tuned for every passenger”—with 900 watts of power. What’s nice is that the G90 also features rear-seat entertainment system screens and knobs that allow rear-seat passengers to take control of the music. You can lock that out if you’d prefer.

The Genesis G90 features Apple CarPlay and Android Auto connectivity. While other manufacturers like BMW are offering wireless Apple CarPlay, you still need to plug your phone in via the USB in the G90. 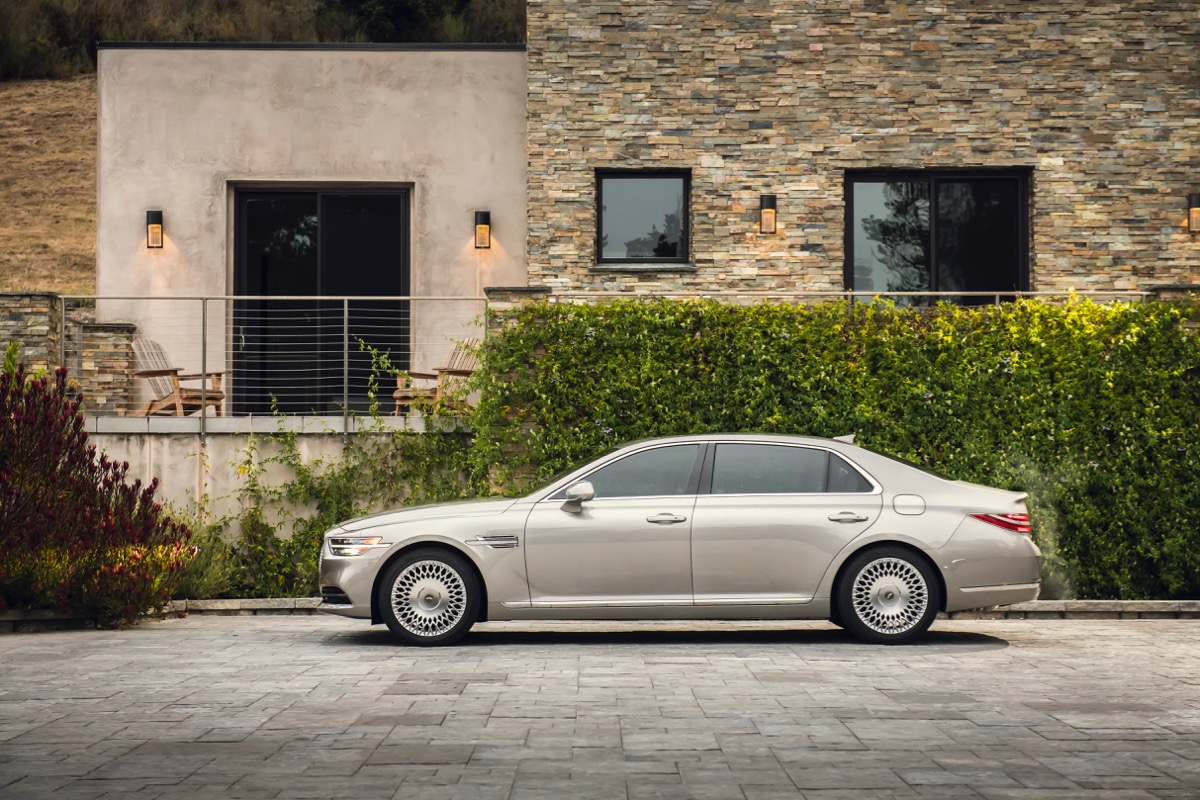 Unique to the luxury sedan class, every version of the 2021 Genesis G90 is an Insurance Institute for Highway Safety (IIHS) Top Safety Pick+. BMW, Mercedes-Benz, Audi, and Lexus can't claim that about their flagship luxury sedans. 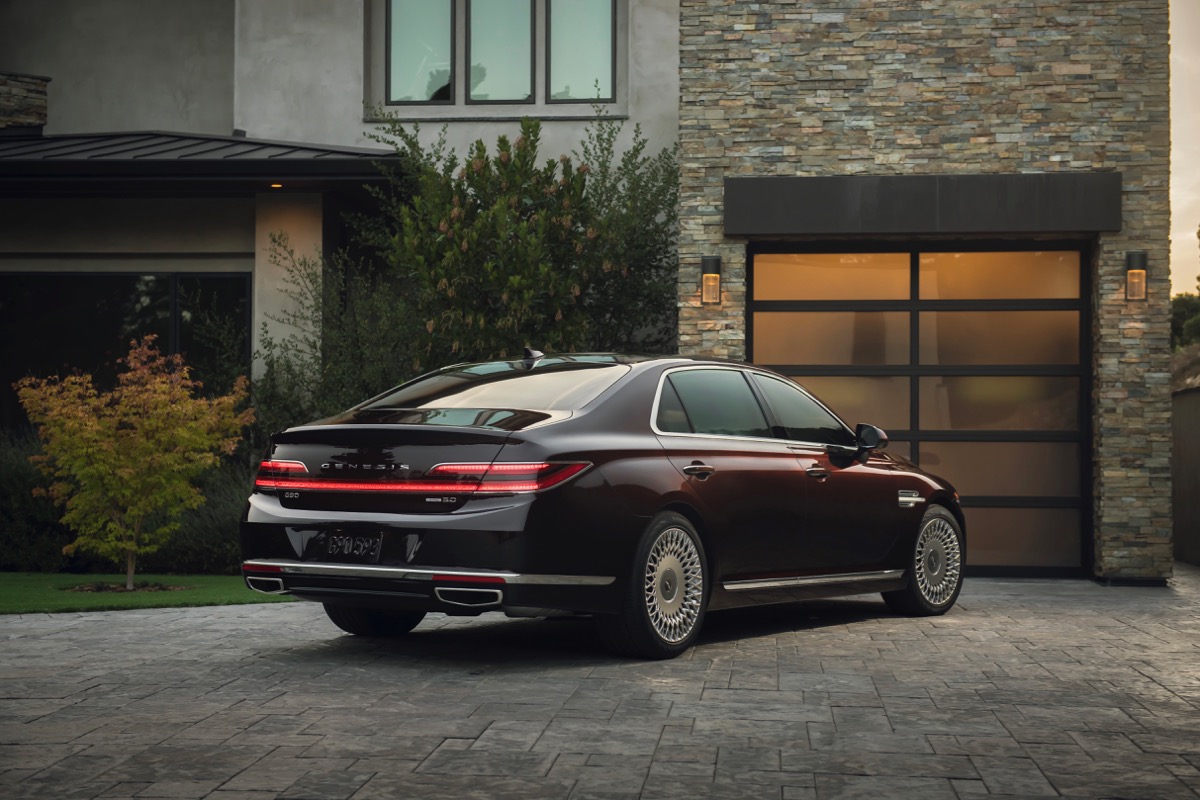 That’s competitive with the Lexus LS 500, which is rated 2 mpg combined higher than the RWD V6 G90. It’s also in the same ballpark as the BMW 7 Series, though the electric-assisted hybrid 745e delivers 54 mpg combined. All S-Class configurations offer similar fuel economy.

The G90 is an uncompromising luxury car. If you want the white glove treatment, pay the extra money for a Mercedes. But if you don’t mind dropping your luxury car off for service at the same store where recent college grads are buying Elantras, the Genesis is your ticket. A concierge program will pick the car up anyway, so you’ll most likely never see the inside of a dealership.

What Do You All Think About The Tiger Woods Crash And The Hyundai Genesis?