Looking for a New Chevrolet Traverse in your area?

Chevy’s family SUV is competent, but not a standout. 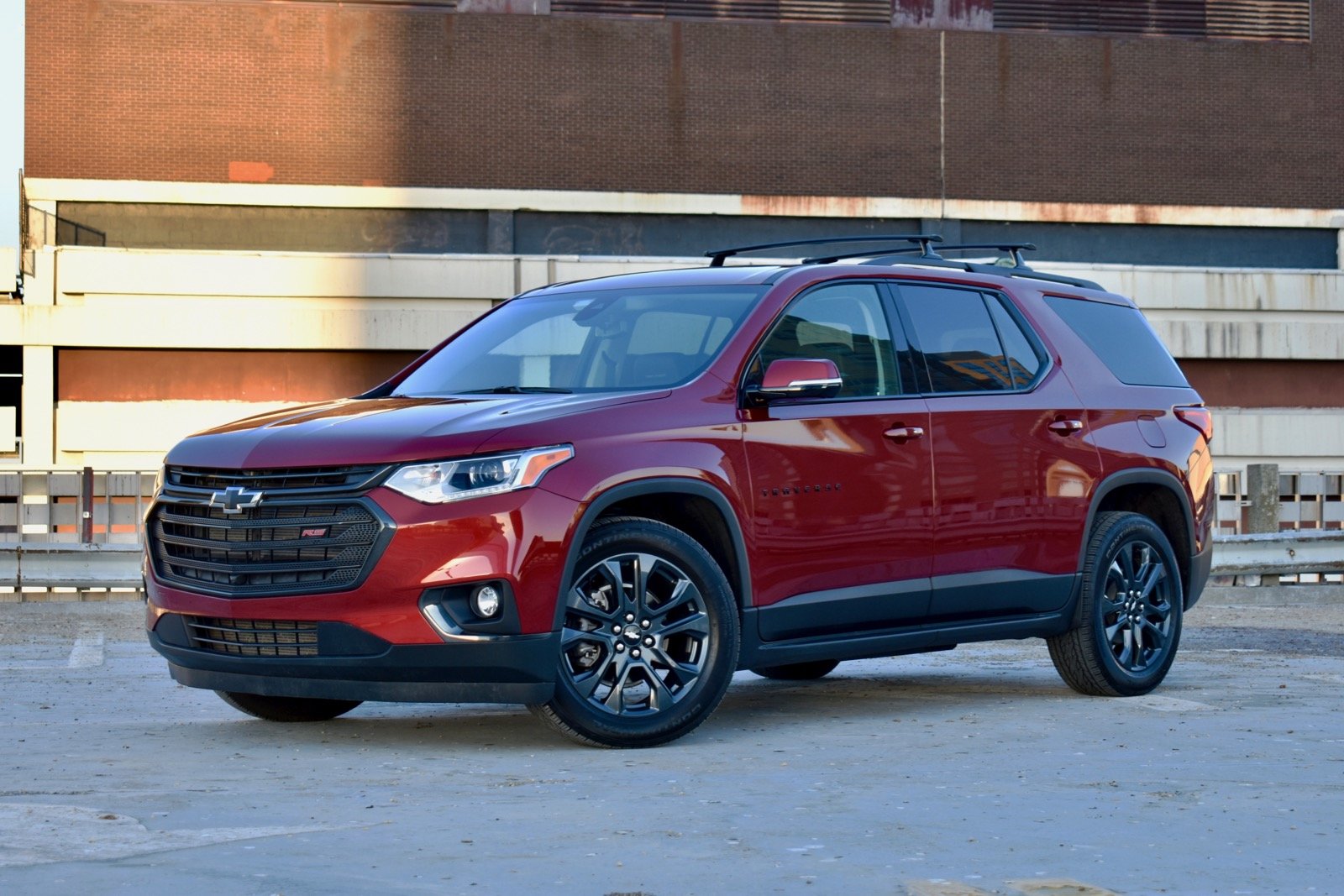 Like a geological core sample, you can chart the evolution of the American family car by looking at the Chevrolet lineup. Go back a few decades and you have tail-finned and wood-paneled station wagons, then Lumina APV “Dustbuster” minivans. Today, you have the 2021 Chevrolet Traverse.

The Traverse is a three-row crossover of the type that has largely eliminated the minivan from showrooms. As the new default choice for larger families, the three-row crossover has spawned a competitive market segment, encompassing the Ford Explorer, Honda Pilot, Hyundai Palisade, Kia Telluride, Mazda CX-9, Nissan Pathfinder, Subaru Ascent, Toyota Highlander, and Volkswagen Atlas. So buyers aren’t exactly lacking in choices here.

The current-generation Traverse dates back to the 2018 model year, so it’s not the newest vehicle in the segment, but still fairly fresh. Chevy had some updates planned for the 2021 model year—including minor styling changes and wireless Apple CarPlay/Android Auto connectivity—but they’ve been pushed to 2022. However, these changes don’t appear significant enough to justify waiting around for the 2022 Traverse, which is scheduled to reach dealerships later this year. 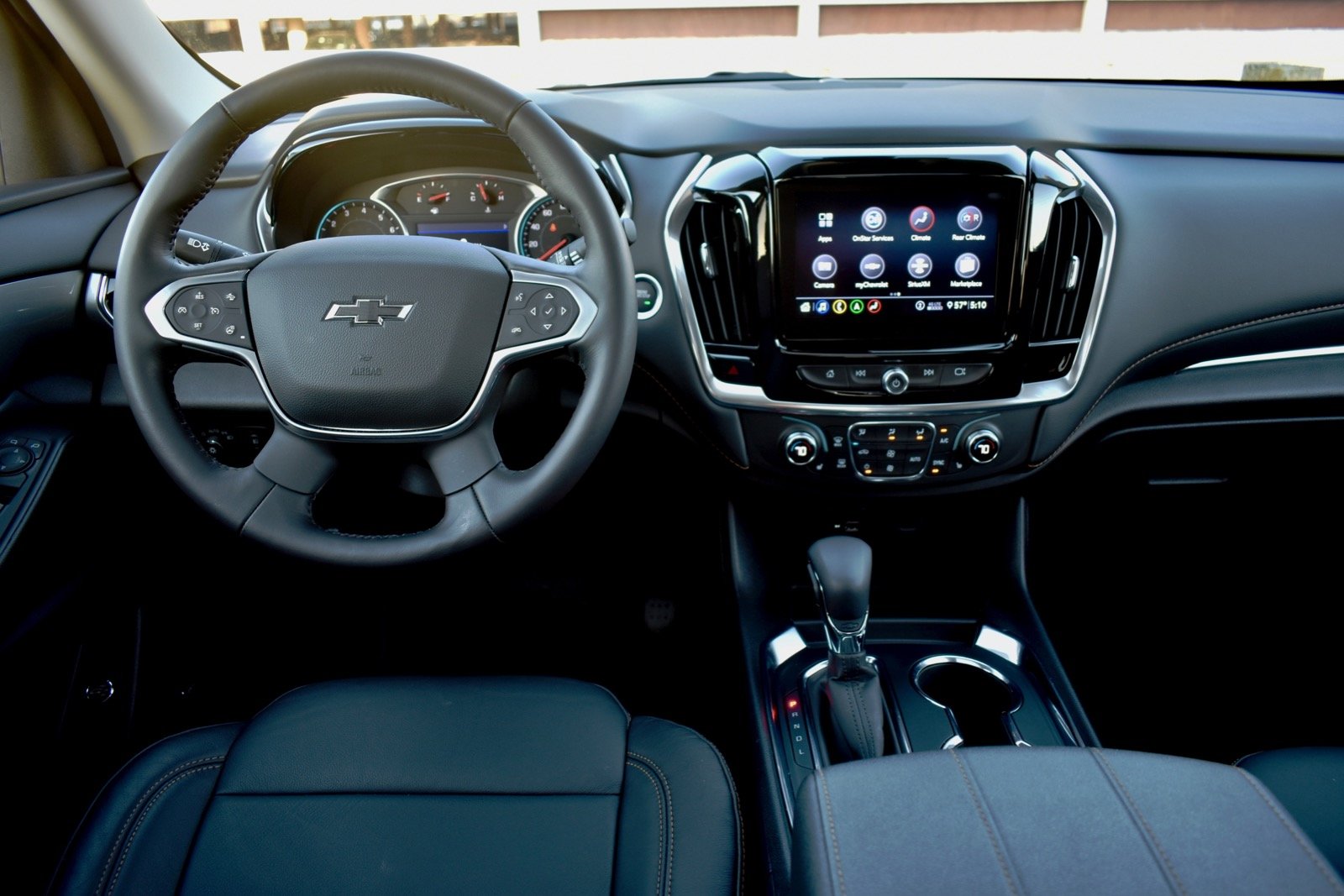 The Traverse is, in a sense, a throwback. Instead of making the basic exterior styling do all of the work, Chevy relies heavily on styling details to give individual trim levels their own identities, much as it once used different wheels or extra chrome to differentiate an Impala from a Caprice.

The exterior itself is generic SUV—tall roof, chunky wheel arches, big grille. That’s likely what most buyers are looking for, and it makes for a cleaner, more handsome design than the Toyota Highlander or Hyundai Palisade. However, the Ford Explorer and Kia Telluride pull off the stereotypical SUV look with a bit more personality, in our opinion, while the Mazda CX-9 has a more streamlined appearance that also stands out a bit more.

That restrained styling helps emphasize the cosmetic elements keyed to different trim levels, though. Our RS model had blacked-out trim, while the High Country model gets a splash of chrome. Redline, Sport, and Midnight appearance packages are also available for lower trim levels. The base Traverse L gets 18-inch wheels, but 20-inch wheels are available on higher trim levels.

Under the skin, the Traverse shares a basic platform with the Buick Enclave, GMC Acadia, and Cadillac XT6, but those three crossovers aim for a more premium feel than the blue-collar Traverse. The Traverse also slots below the Chevy Tahoe in size and features car-like unibody construction. The Tahoe is a body-on-frame SUV related to the Chevy Silverado pickup truck.

The interior has the same restrained styling as the exterior, the standout feature being an optional Dual SkyScape two-panel sunroof that allows sunlight to shine over the first and second-row seats. Materials in our higher-level RS tester seemed fairly good, especially considering General Motors’ reputation for cost-cutting in this area, but not quite worthy of the car’s roughly $50,000 MSRP. However, the same can be said of most other midsize three-row crossovers, all of which get expensive quickly with options. 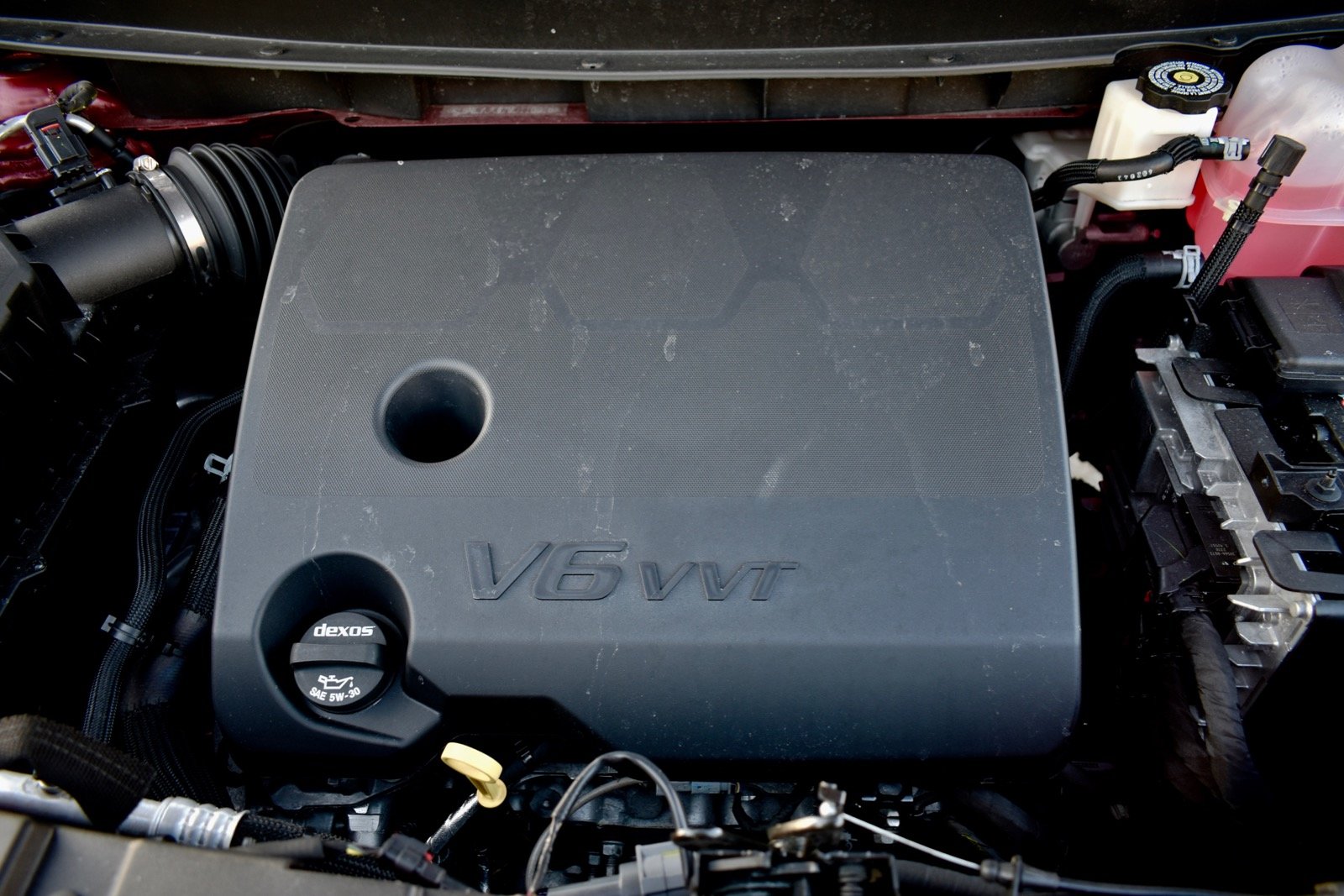 The Chevrolet Traverse is only available with one engine: a 3.6-liter V6 that makes 310 horsepower and 266 pound-feet of torque. Chevy previously offered a 2.0-liter turbocharged four-cylinder engine alongside the V6, but it’s no longer available. The only transmission choice is a nine-speed automatic.

From behind the wheel, the Traverse didn’t feel as powerful as the specs would suggest, but that power was still there when we needed it. The V6 powertrain didn’t feel particularly strong off the line, but plenty of grunt can be summoned for highway merging or overtaking if you keep your foot down. The nine-speed automatic transmission performed well overall, but with occasional rough shifts.

The Traverse impressed us with its highway road manners. It combined a quiet cabin (thanks to standard active noise cancellation) and bump-absorbing suspension with good body control and precise steering, giving it a solid yet comfortable feel. On twistier roads, the Traverse was less impressive, lacking the agility of some other three-row crossovers, like the Subaru Ascent. That’s partly down to a somewhat puzzling AWD system.

The system (which you have to manually activate, unlike most competitors) can send up to 50% of torque to either front wheel, or 85% of torque to either rear wheel. That ability to split torque between individual wheels is commonly referred to as torque vectoring (although Chevy doesn’t use that term), and it can have a big impact on handling. However, we couldn’t feel the system shunting torque around from behind the wheel, so it seems Chevy has left some capability on the table.

The Traverse does at least get off-road and tow/haul drive modes. With the latter mode engaged and necessary equipment installed, the Traverse has a 5,000-pound maximum towing capacity. That’s average for the segment, although the Nissan Pathfinder can tow up to 6,000 pounds, while the Ford Explorer can tow up to 5,600 pounds with the optional 3.0-liter twin-turbo V6 engine. 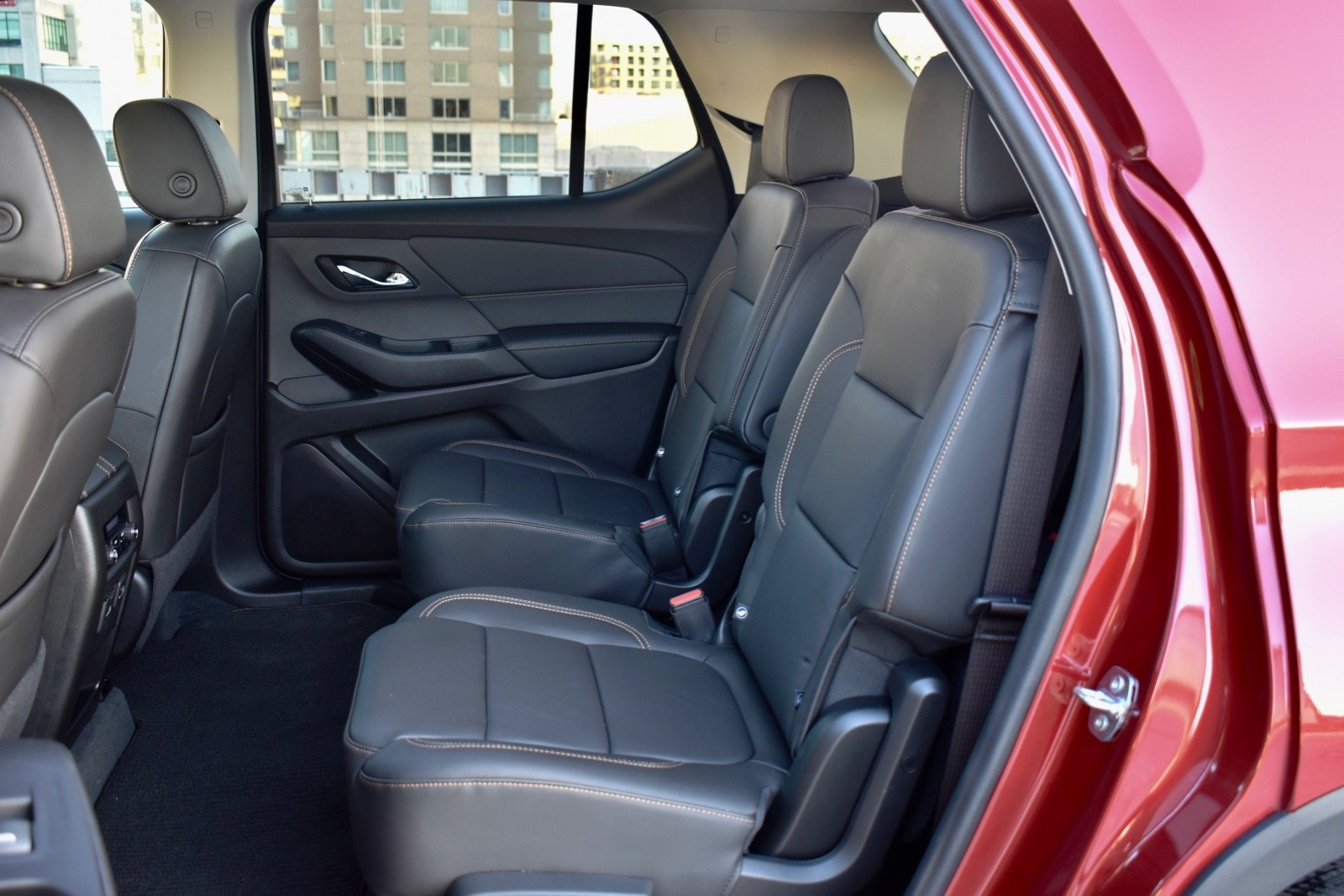 The Traverse is available with seating for seven or eight, depending on whether you opt for a second-row bench seat or captain’s chairs. Headroom and legroom in all three rows is above average, but not segment-leading. Heated front seats were standard on our Traverse RS tester, while ventilated front seats and heated outboard rear seats are available on higher trim levels.

For such a large vehicle, the Traverse is fairly stingy on interior storage options. That’s fairly typical of midsize three-row crossovers, though, as they tend to sacrifice some practicality for rugged styling. In a similar footprint, a minivan is a much better choice for carrying lots of people or stuff. The low floor and sliding doors not only make loading and unloading kids and cargo easier, they also allow for more storage space. 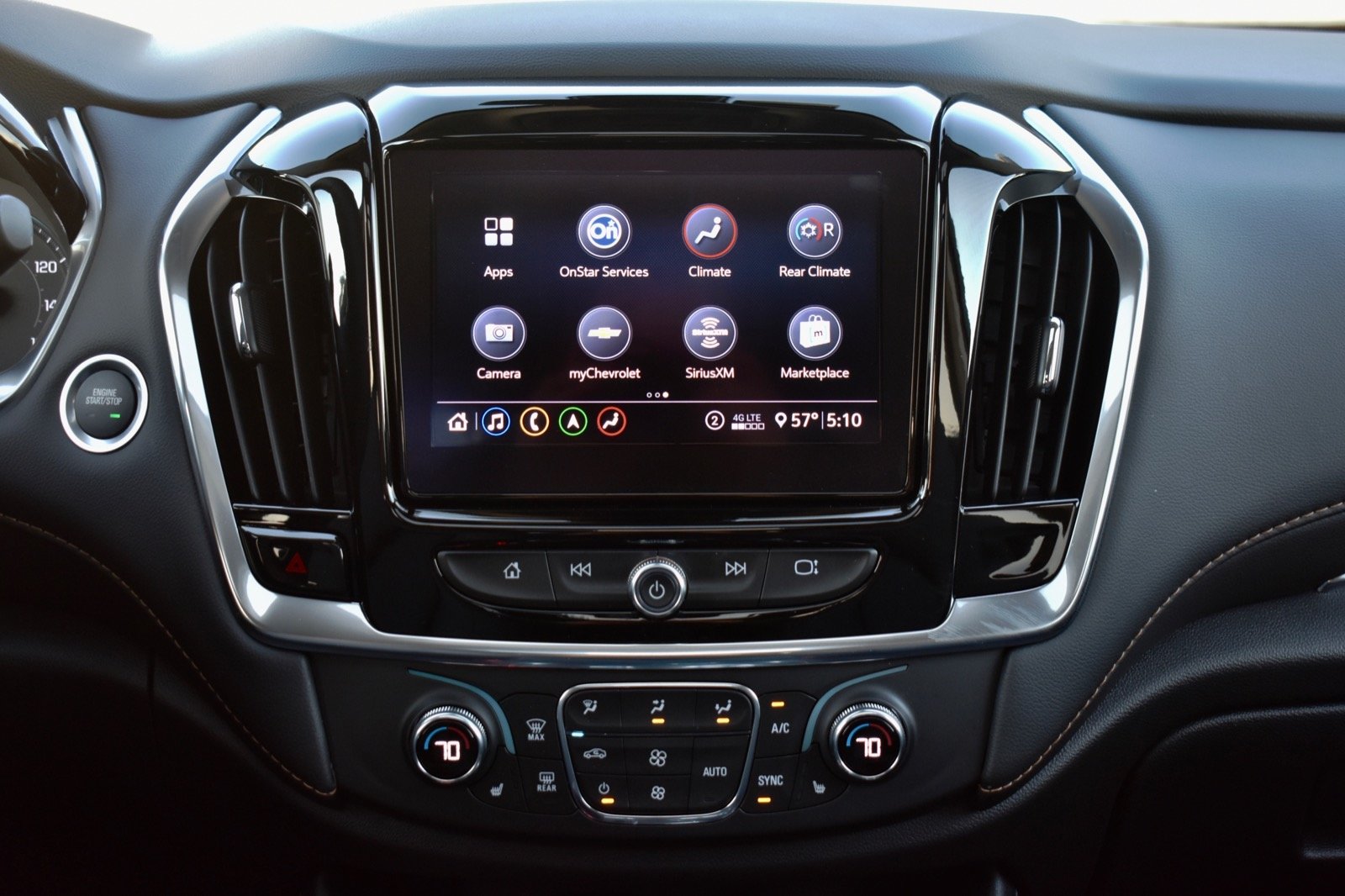 The standard infotainment system includes a 7-inch touchscreen, Apple CarPlay/Android Auto (as mentioned above, wireless versions are coming for 2022), and Bluetooth. An 8-inch touchscreen, navigation, 4G-LTE WiFi hotspot, and a Bose 10-speaker audio system are available on higher trim levels.

Both Ford and Toyota offer much larger screens, but Chevy shows that bigger doesn’t necessarily mean better. We were satisfied with the 8-inch screen in our Traverse RS test car, which proved easy to use thanks to large smartphone-like icons for most functions. We also appreciate that Chevy retained analog controls for audio volume and climate control.

Similarly, while the Ford Explorer is available with a digital instrument cluster, the Traverse’s analog instruments (supplemented by a small LCD screen) were fine, in our opinion. Tech-savvy buyers may find this setup dated, but it still works.

The Chevy Traverse is also available with a rearview camera mirror, which allows the driver to toggle between the standard mirror view and a camera feed. This eliminates blind spots created by the rear pillars and passengers’ heads and really came in handy in the Traverse, as rear visibility without the camera was suboptimal. An optional HD surround-view camera system made maneuvering out of parking spaces a breeze.

Chevy provides 2 USB ports for each row as standard equipment on all trim levels, but wireless phone charging is only standard on the Premier and High Country models. 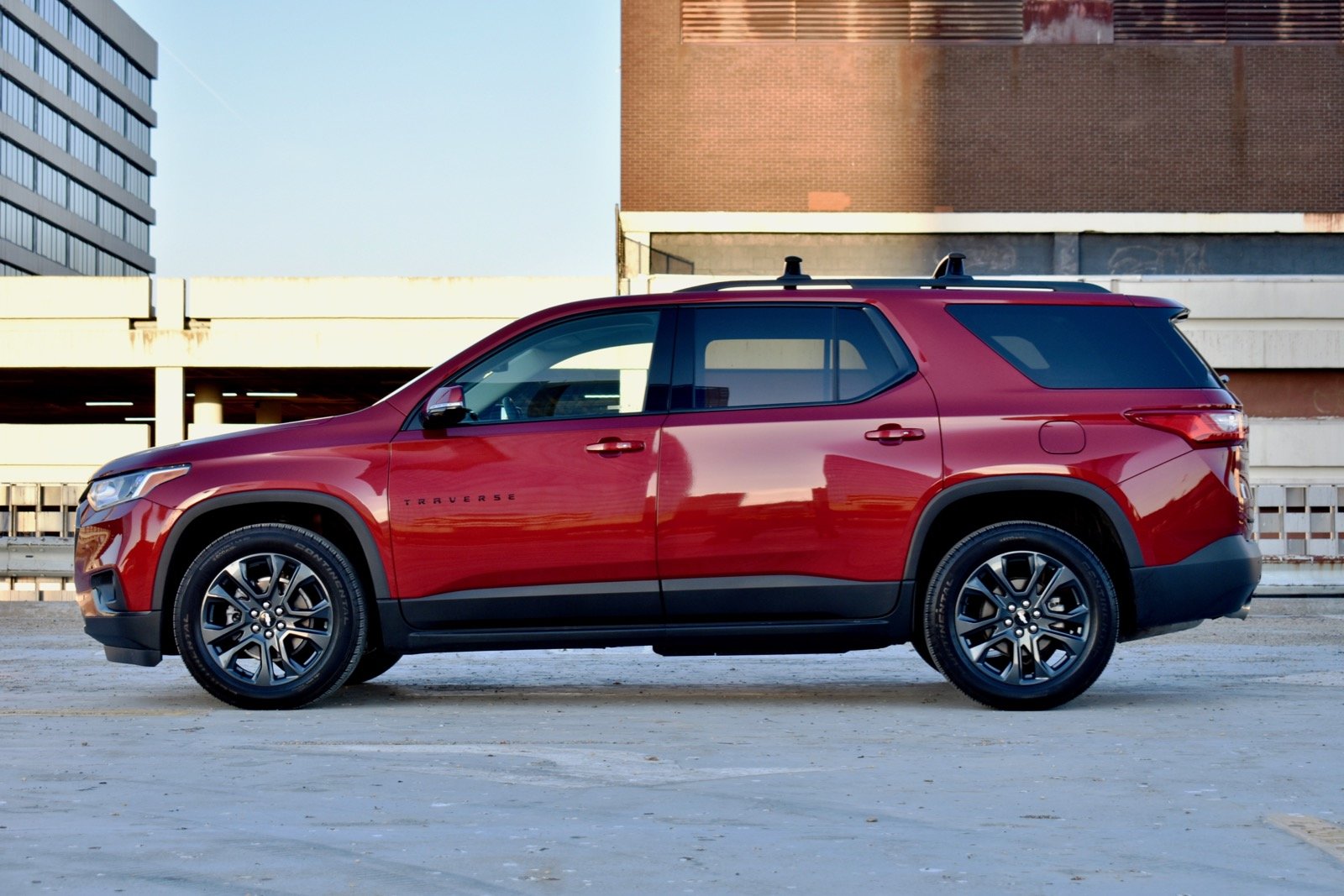 The Insurance Institute for Highway Safety (IIHS) gave the 2021 Chevy Traverse top “Good” scores in all crash tests, as well as the top “Superior” rating for front-crash prevention tech. However, The Traverse received “Acceptable” and “Poor” headlight ratings (depending on trim level), and an “Acceptable” rating for LATCH child-seat anchor ease of use. 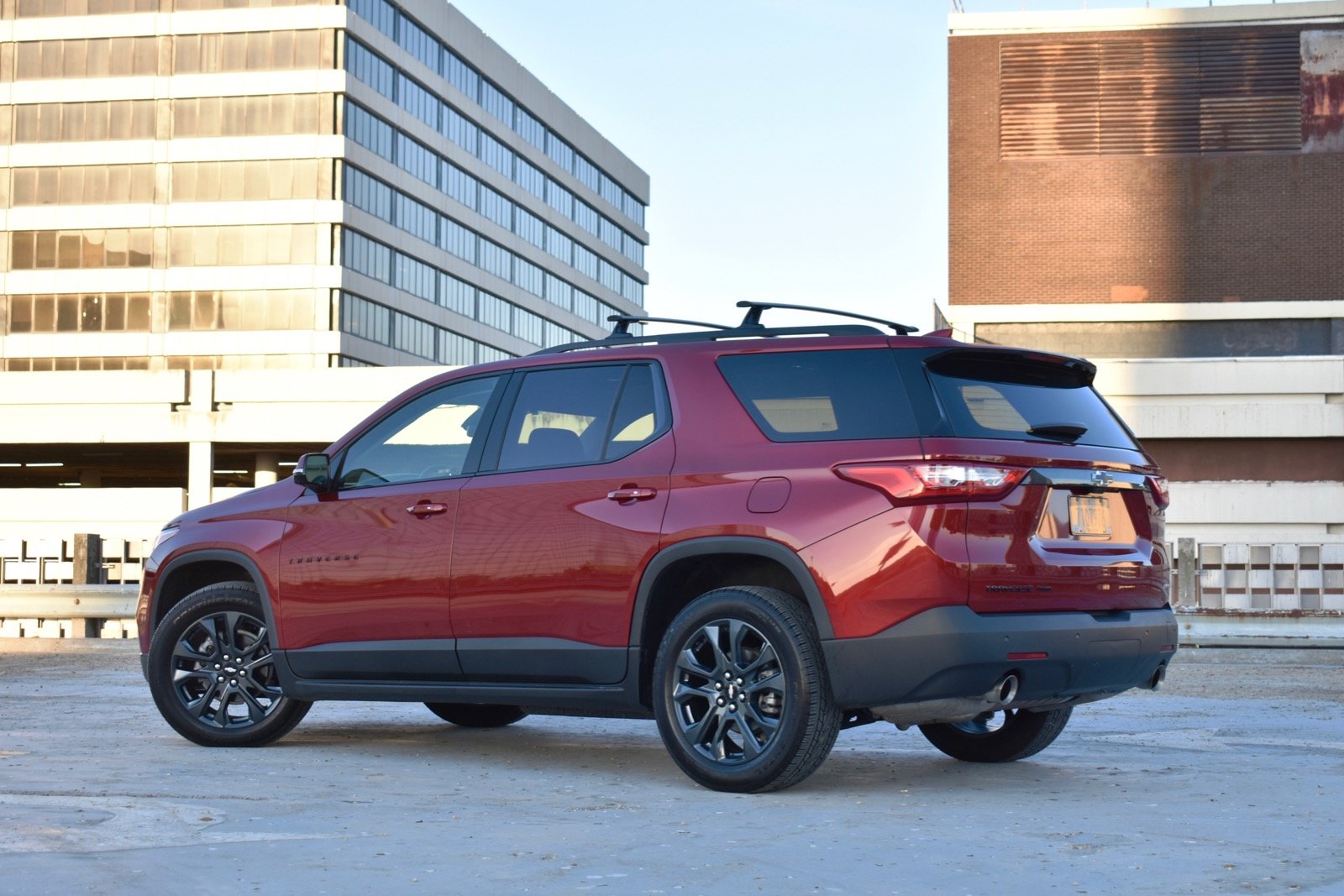 Chevy offers a three-year, 36,000-mile, bumper-to-bumper warranty, and five-year, 60,000-mile, powertrain warranty. Those terms are average for this segment, although the Hyundai Palisade and Kia Telluride get much longer warranties.

Pricing starts at $30,995 for a base Traverse L with FWD, ballooning to $55,490 for a range-topping Traverse High Country with AWD. Our RS AWD tester had a few optional extras, including a towing package and the Dual SkyScape sunroof, bringing the price to $51,030 MSRP. That’s a big step up from the base model, but it’s easy to spend similar money on competitor vehicles if you want a lot of equipment.

The Traverse has the same drawbacks as other midsize three-row crossovers. It’s a poor value, and packaging is compromised compared to a minivan. While the Chevy has more cargo space than competitors, it also has less standard driver-assist tech. Aside from those two points, the Traverse is a competent vehicle that doesn’t really stand out in a very crowded market segment.

What's your take on the 2021 Chevrolet Traverse?

Have you driven a 2021 Chevrolet Traverse?
Rank This Car

Enter your zip to see incentives for a new Traverse in your area.