Car shopping often comes down to “wants” versus “needs.” The 4Runner is likely the first option. 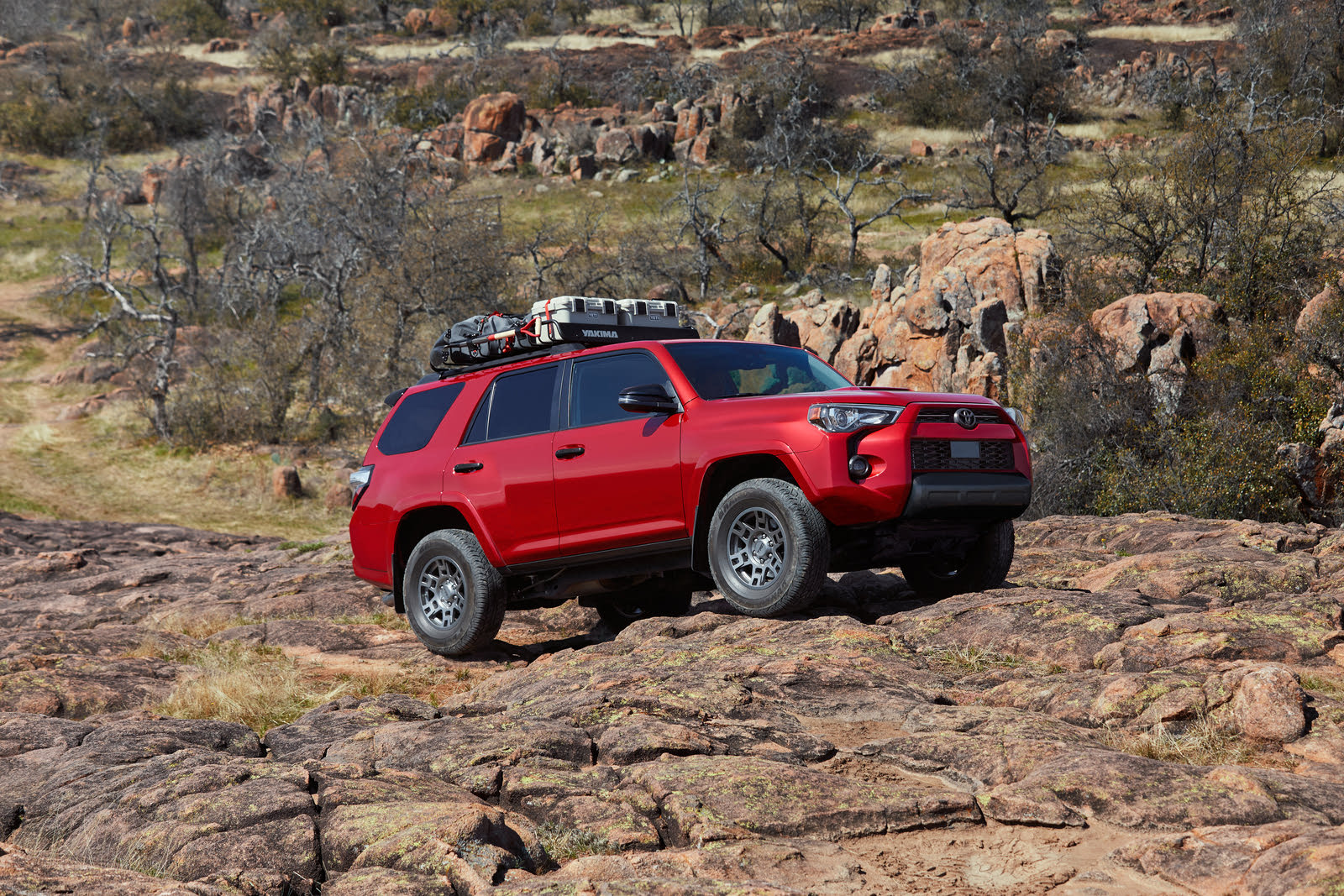 Even in its expensive Limited trim, the Toyota 4Runner remains clearly purpose-built for tackling terrain. Whether on a dusty cow path or snowy mountain road, the 4Runner looks most in its element when its outside the typical car’s comfort zone. For 2020, Toyota keeps enough chrome and leather available to market the 4Runner as a rough-and-tumble luxury alternative, but shoppers considering one had better have a real need for 4-wheel drive. 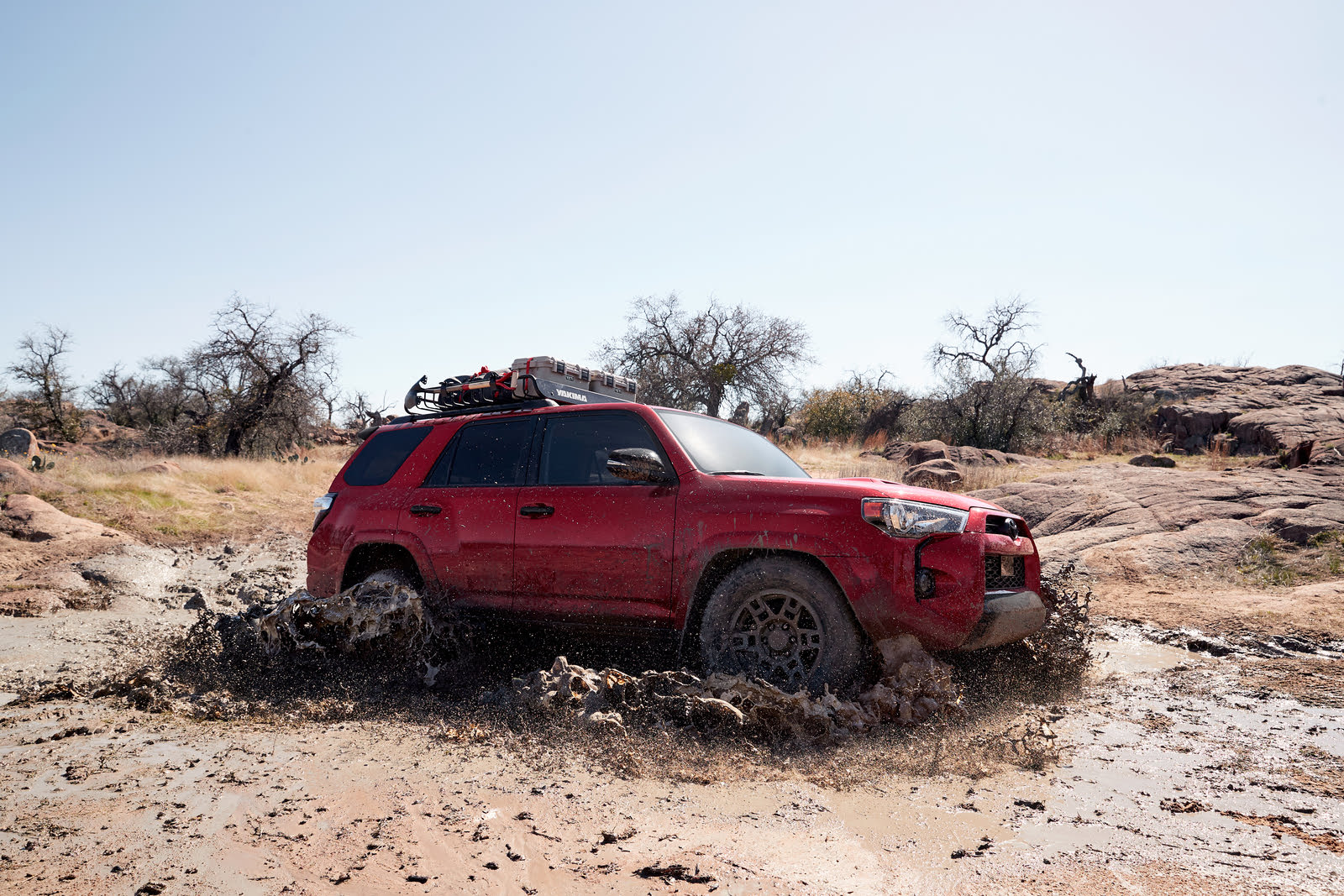 Tall slab sides, a high beltline, short overhangs, and a near-vertical front fascia are just a few stylistic keys to the 4Runner’s timeless design. Like an XJ Jeep Cherokee, the 4Runner’s lack of visual flash help give it a utilitarian attitude. The flared wheel wells are designed that way only so they can accommodate bulky off-road tires. The short overhangs allow the 4Runner to tackle steep pitches and sharp declines. Ironically, the hood scoop, which is one of the clear visual cues denoting an off-road-focused TRD trim, is one of the 4Runner’s few non-functional elements.

Small, angular headlights highlight the front end. On all but the Limited and TRD Pro trims, twin body-color bars cut across the middle and bottom of the grille. On the TRD Pro, these accents are blacked out, with the middle bar boasting “TOYOTA.” On the Limited, they are bright, glinting chrome.

Our test model was a Limited trim and clearly aimed at shoppers more interested in comfort than capability. Leather upholstery covered all the seats in our test car, although lower trims come standard with cloth, and the SR5 Premium and TRD Off-Road Premium both come standard with sweat-trapping SofTex material. Regardless of trim, you’ll find an 8-inch touchscreen housed within the dashboard.

Despite the chrome and leather, anyone familiar with luxury SUVs will recognize that the Toyota 4Runner Limited is a bit of a lipstick-on-a-pig situation. Because of the car’s utilitarian DNA, plenty of plastic still abounds, and the seating position is designed for tackling a trail, not hitting the highway. 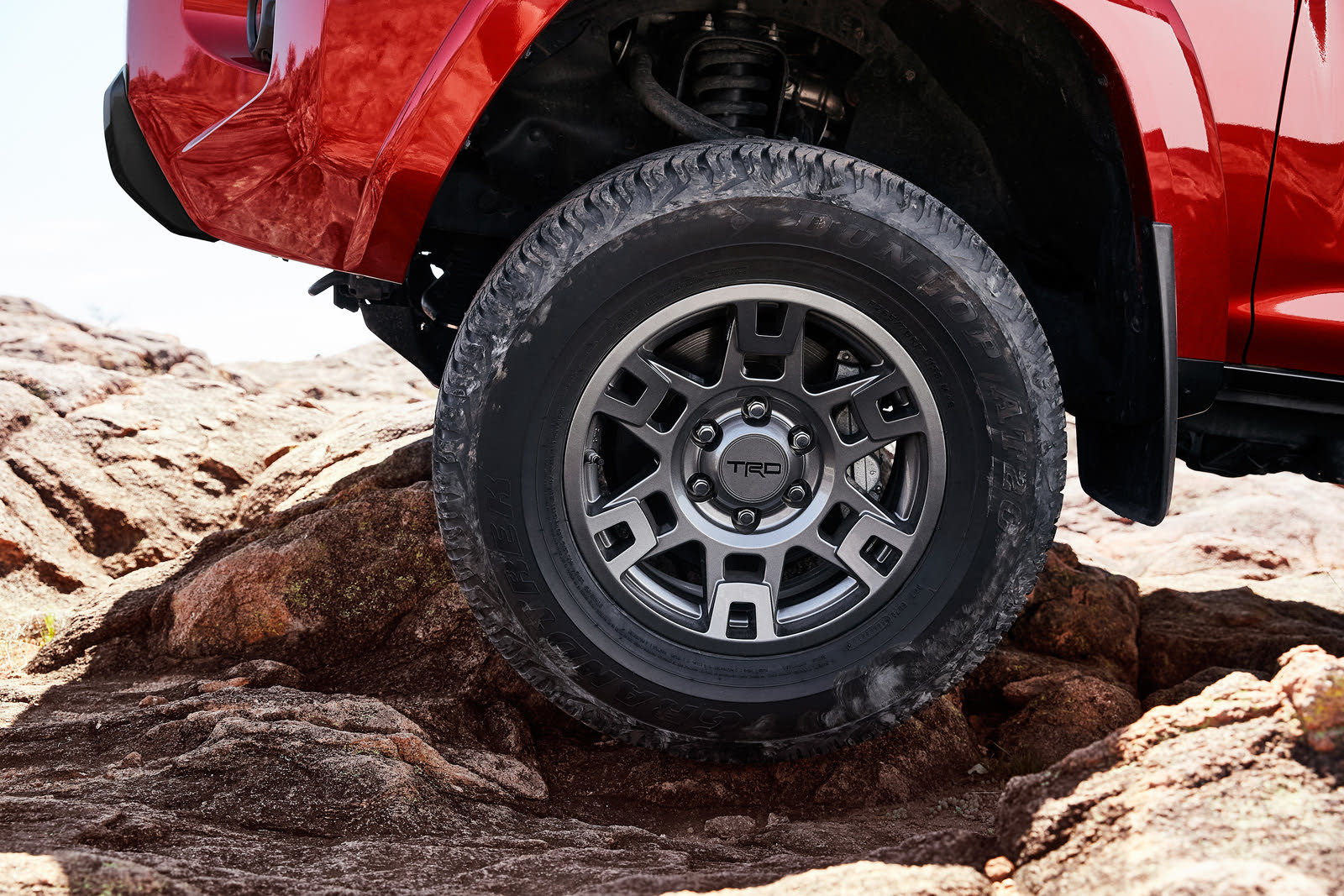 The modern truck market offers every shopper a veritable bounty of engines, transmissions, and drivetrains. Want to pick up an F-150? You’ve can choose from three cab sizes, three bed lengths, and six engines. You can pick between rear-wheel drive (RWD) or 4-wheel drive (4WD), but thankfully there’s only one transmission available.

Despite being built on a truck chassis, Toyota takes a slightly more straightforward approach with the 2020 4Runner. Whether you buy a base-spec SR5 or a $50,000 TRD Pro, you’ll have a 4-liter V6 engine under the hood with a 5-speed automatic transmission managing its 270 horsepower and 278 pound-feet of torque.

This is not a smooth and efficient engine. It’s not designed to sip fuel and whisk the 4Runner away from traffic lights. This V6 is for lumbering. It is for plowing ahead regardless of what stands in the 4Runner’s path. The horsepower and torque combine with the 5-speed to allow for up to 5,000 pounds of towing capacity, and the engine’s longevity is a testament to its reliability. Considering a 4Runner? Expect bad fuel economy. The EPA estimates 16 mpg city, 19 highway, 17 combined, and it does not get any better if you opt for 2WD instead of 4WD. Over 400-plus miles, we managed to eke out 17.7 mpg.

The 4Runner’s real value does not come from how much it can tow (and it certainly doesn’t come from its fuel efficiency). The 4Runner performs best off-road. The body-on-frame construction is tough, allowing the 4Runner to tolerate the rough, twisting forces vehicles are often subjected to when taking off the tarmac. Driving on the road, you’ll notice significant body roll in the corners, and the steering manages to feel heavy while also vague. Piloting a 4Runner is a blast from the past; there’s no “point-and-shoot” navigation with this vehicle. Turn the wheel, press the throttle, and feel the beast lumber in the direction you’ve aimed.

You can buy a 4Runner with RWD, although doing so would significantly discount the SUV’s value proposition. This 4Runner is built for the wilderness, and driving only two wheels isn’t a great idea out there. While the full-time 4WD system found on our Limited test model is better suited for maintaining forward progress than crawling up boulders from a standstill, the part-time system in the TRD models can handle the latter with little trouble.

Those off-roading 4Runners also feature advanced traction systems like Toyota’s CRAWL control. This system lets the driver select one of five low-speed settings, and then focus only on modulating the brake and keeping the SUV’s steering on track. Similarly, Multi-Terrain Select uses pre-set traction settings like dirt or sand or rock to help the 4Runner keep moving forward across tricky ground surfaces. 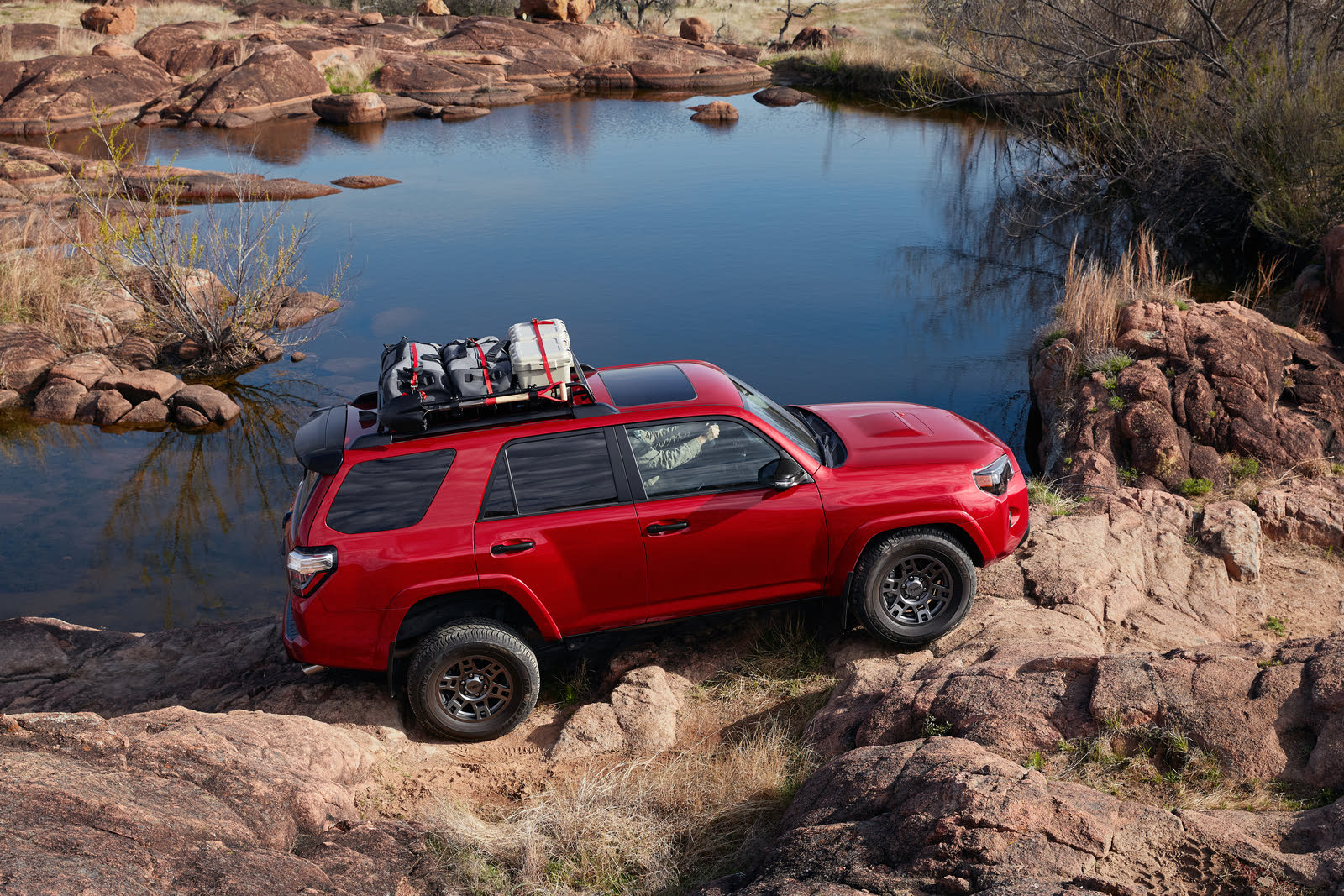 When engineering a vehicle for off-roading, outward visibility is critical. As such, and despite its generous dimensions, you’ll have no issue keeping track of where the 4Runner sits on the road. Similarly, we were pleasantly surprised by the 4Runner’s relatively tidy turning radius. At 18 feet, 7 inches, it’s tighter than its Toyota stablemate, the Highlander, and its primary off-roading competitor, the Jeep Wrangler Unlimited.

Inside, the dashboard sports large, chunky knobs for the HVAC controls and slightly smaller (but still plenty chunky) knobs for the stereo’s volume and tuning controls. The physical buttons lining either side of the 8-inch touchscreen are equally easy to understand and use. On the steering wheel, an array of buttons control plenty, from the driver-information display within the binnacle to the adaptive cruise control system. However, these steering-wheel controls aren’t illuminated, and they were nearly impossible to comprehend when we picked the car up and drove home after dark.

Largely due to its body-on-frame construction and impressive ground clearance, the 4Runner sports a very tall seating position. Power-retractable running boards (always a fun party trick) came on our Limited trim, but without them, climbing in and out of the 4Runner will get tiring for more diminutive owners. Once you’re inside, you’ll likely enjoy the commanding position. Driving over pot-hole-filled city streets, we didn’t just feel like we were insulated from the bumps, it felt like we were looking down on the road ahead and punishing the pavements imperfections with my 4WD battle cruiser.

The 4Runner appeals to lots of shoppers because it offers an optional third row of seats in the non-TRD and non-Venture trims. Be warned: these seats are best used, and indeed appear designed, for short and occasional use. Unlike a Subaru Ascent or Chevrolet Traverse, both of which feature a spacious bench seat in the third row, the 4Runner sports two jump seats at the back. The seatback folds toward the floor when not in use, and the bottom cushions actually slide backward and under the seatback. Not only does the third row lack legroom, but the design of these seats requires them to be narrow and thin—never qualities associated with comfort. 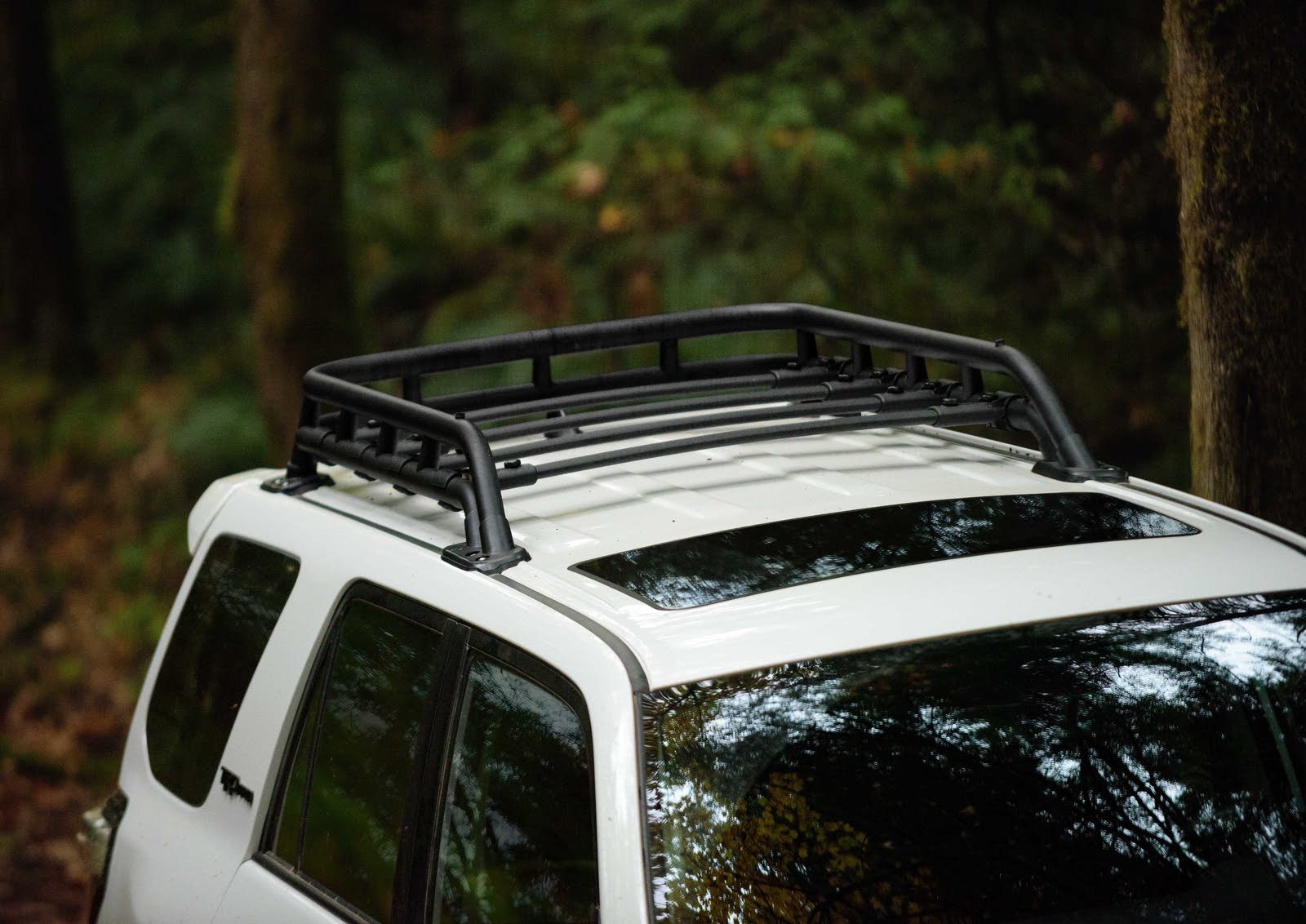 The 4Runner has not typically been a bastion of technology. For 2020, however, Toyota has finally seen fit to adequately update the 4Runner with an 8-inch touchscreen infotainment system with Apple CarPlay and Android Auto compatibility. And not a moment too soon, either. With the widespread prevalence of smartphones, projection systems like CarPlay and Android Auto are almost always going to be easier to use and understand than automakers’ factory systems.

Toyota’s proprietary system is not terribly difficult to understand, but we had a devil of a time managing the onboard navigation system that came on our Limited model. Once we did manage to set the navigation, Toyota’s nav system predicted our drive would be close to 2 hours long. When we punched it in (quickly and easily) using Android Auto, Google Maps gave a more direct route and estimated an hour of drivetime. We love sitting behind the wheel as much as the next person, but sometimes you just want to get where you're going.

The 4Runner is also compatible with Amazon Alexa and features Bluetooth connectivity, a single USB media port in SR5 and TRD Off-Road trims, and various subscription services like Sirius XM Radio, Safety Connect, and WiFi Connect. Upgrading trims brings along features like a JBL stereo and the aforementioned navigation system.

But while Toyota has added plenty of technological advancements evolving the 2019 4Runner to the 2020 model year, this SUV still lags behind the market leaders in both total features and usability. An 8-inch touchscreen with Apple CarPlay is great, but competitors have had this technology for years and many sport much larger, brighter screens in 2020.

If you’re buying a Toyota 4Runner for technology, the biggest gains will be realized when you get stuck between a rock and a hard place—literally. This SUV has plenty of advanced features, but the top-of-the-line ones are hidden in the powertrain, not plastered on the dashboard. 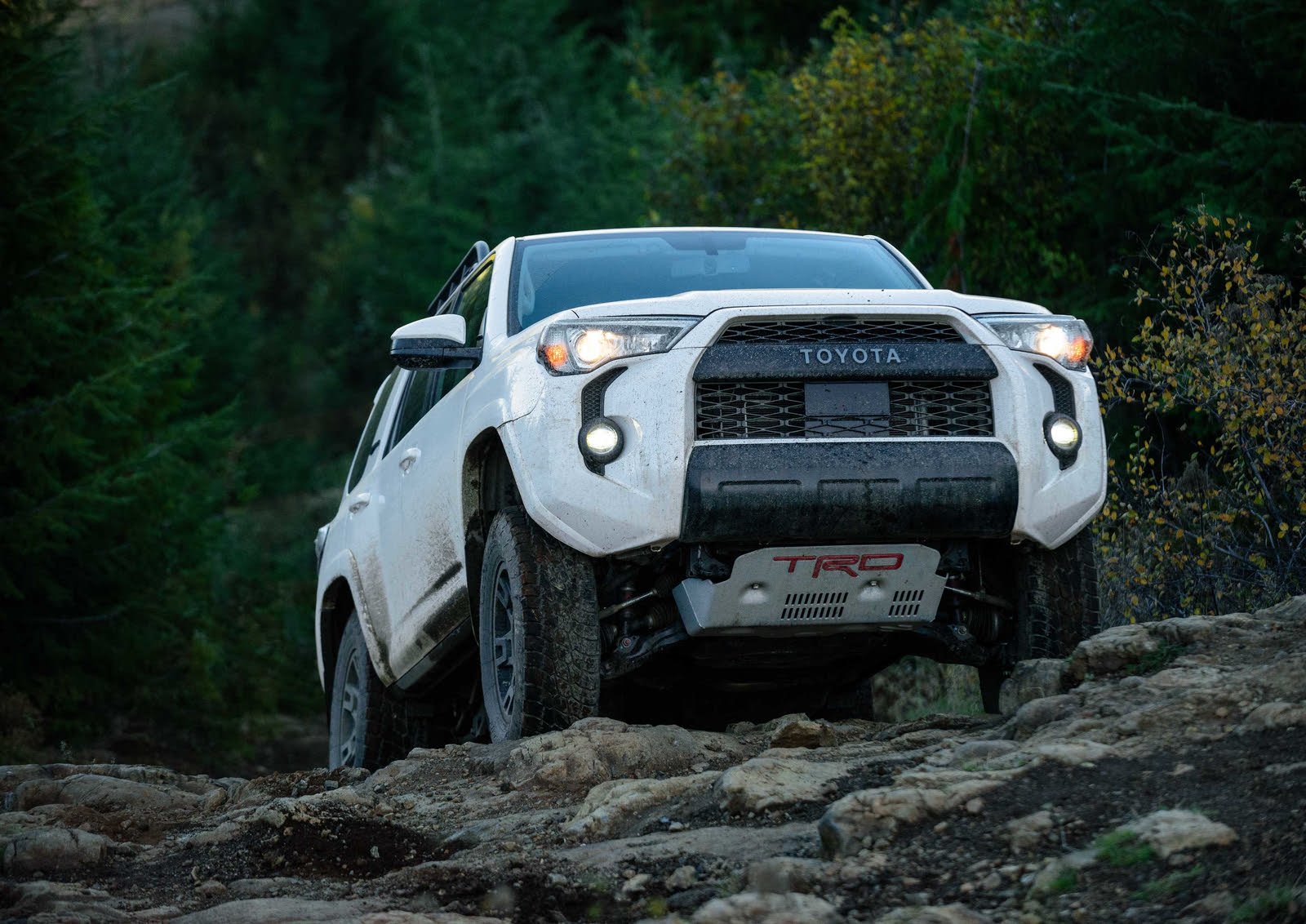 Additionally, the 2020 Toyota 4Runner comes equipped with eight standard airbags. All told, the 4Runner of today is a significantly safer machine than those of the prior 35 years. Drivers and passengers alike should take comfort in knowing their vehicle is equipped to actively protect them, rather than relying on the classic “bigger car wins” method.

The National Highway Traffic Safety Administration (NHTSA) also found the 2020 4Runner to be relatively safe, awarding it four out of five stars overall, but giving it only three out of five in its rollover test. Similarly, the Insurance Institute for Highway Safety (IIHS) gave the 4Runner its best score of Good in all crash tests, save the small overlap front: driver-side test, where it scored a Marginal.

While driving the 4Runner on the highway, we found the adaptive cruise control worked as advertised. However, the 4Runner boasts a relatively high center of gravity, and with its imprecise steering, we’d have preferred a more active lane-keeping assist system to the SUV’s reactive lane-departure alert system. 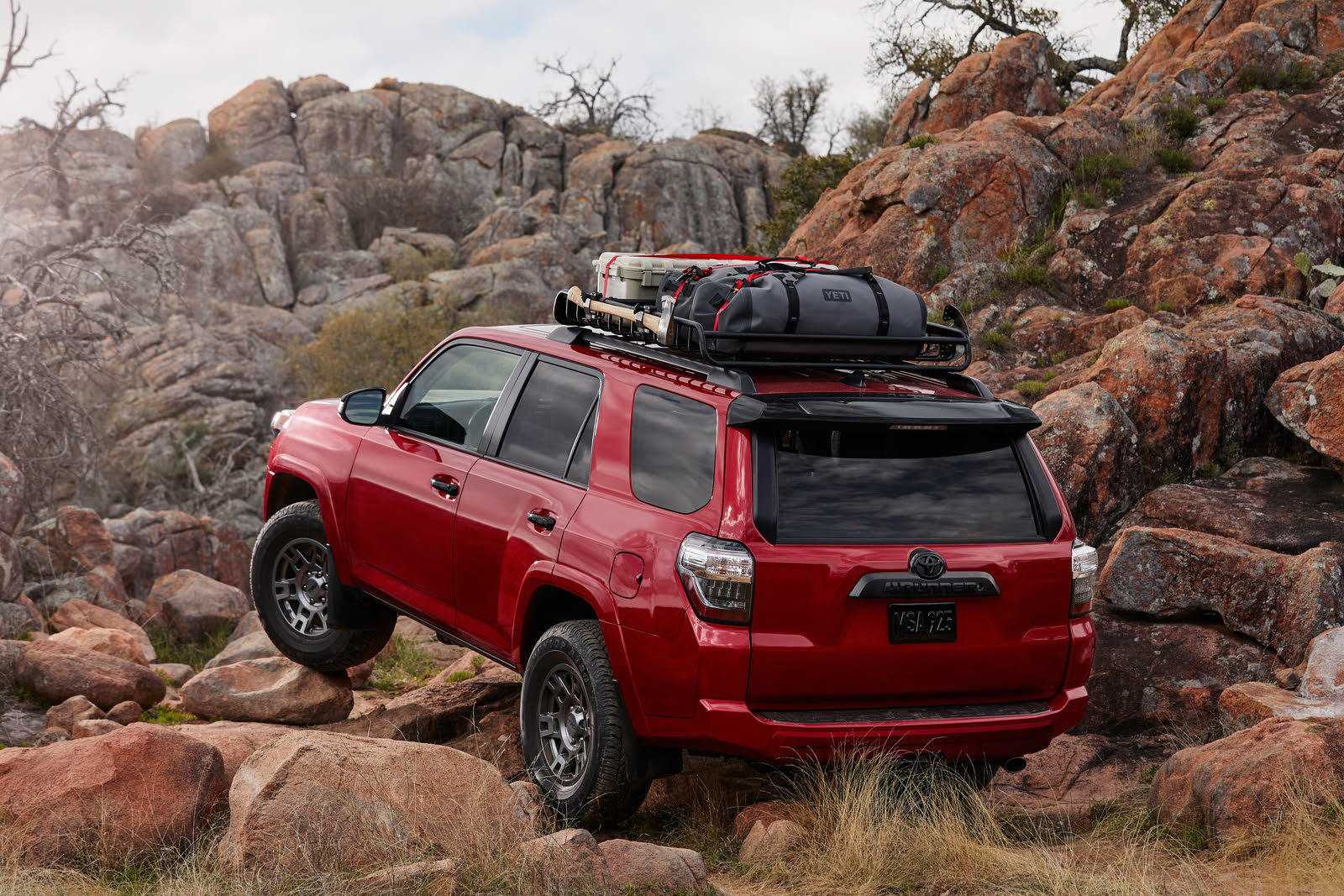 When Doc Brown told Marty McFly, “where we’re going, we don’t need roads,” he could very well have been talking about 4Runner heaven. (As it turns out, he was just talking about 2015 and the introduction of flying cars. Wait, has that not happened?).

There is a very specific world where the 4Runner makes financial sense, and unfortunately, it’s not one with many paved roads. Starting at $36,120 for a base-spec SR5 model, the 4Runner charges a heafty premium compared to more modern crossovers. If you do not need the 4Runner’s rugged capability and you’re willing to forgo some cargo space (and the emergency-only third row), you can get a Toyota RAV4 for more than $10,000 less. Is the third row a necessity for your family? Consider a Highlander; it is more spacious, more refined, and still less expensive. And, of course, we are just talking about base trims. If you want a 4Runner ready for the apocalypse, you’re looking at a TRD PRO—and a starting price of $49,865. Even the new Venture Special Edition, which includes many of the TRD PRO’s features at a more affordable price, starts at a whopping $44,385.

But if you’re researching the 4Runner, there’s a good chance you don’t want a RAV4 or a Highlander. Automobile purchases are often emotional decisions, and few cars carry the same elusive and indefinable coolness as the 4Runner. There may be a thousand more logical options, but there’s only one 4Runner, and if you want one—if you really want one—then there’s likely no substitute.

Have you driven a 2020 Toyota 4Runner?
Rank This Car

How Do I Search For The KDSS Feature In The 4runner?

the 4runner has had the KDSS feature since 2010 yet I can't make that feature searchable or use a keyword. How do I search for that option besides going through every single listing?

I'm Not Seeing My Car For Sale In A Search!!!

I'm not seeing my car for sale in a search!!! I see 5 others from dealerships. You also took off the mileage filter. You already pushed my asking price down with the (great, good, fair, overprice...