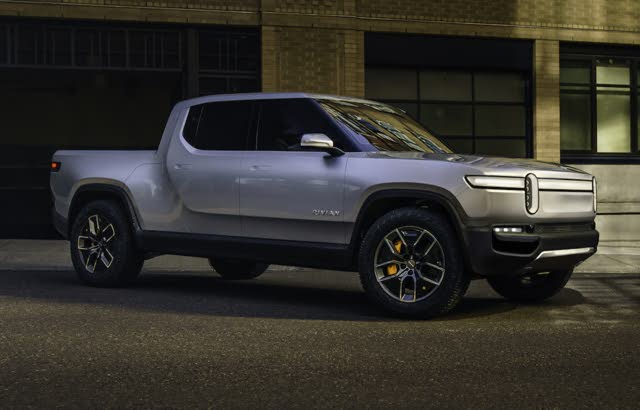 The Rivian R1T is one of the most exciting new consumer pickup trucks in recent memory. The R1T offers a radically different design while still meeting many truck buyers’ needs. Aside from being all electric, the R1T features oodles of storage, an impressive range, and a monumental tow rating. Performance both on- and off-road looks to be incredibly impressive as well. The five-passenger pickup is the American company’s first production model and is set to arrive sometime during 2020. An all-electric SUV called the R1S is also in the works.

The R1T doesn’t just make do with one electric motor. It has four of them, one for each wheel, and total system output of 826 pound-feet of torque. There isn’t an official horsepower figure yet, but Rivian claims an equally impressive 800-plus. That’s enough grunt to enable the R1T to tow up to 11,000 pounds, which is more than a current Toyota Tundra, but a few pounds behind similarly sized trucks from the Big Three. The one concern with the R1T is the same one that comes with all electric vehicles–range. Rivian claims the R1T will go 400 miles before running out of charge. While that’s a solid number, especially in a market with EVs that get around 200 miles or less, many pickup buyers who tow do so for long distances. The R1T will get a 50 percent charge, about 200 miles, in 30 minutes using a fast charger, but on long trips it’s still hard to beat the speed of filling up with good-old-fashioned gas or diesel. The 400 miles of range also only comes on the top tier model with the 180-kWh battery size. A 135-kWh battery is also available, and a 105-kWh version will be available within the next year.

In addition to its towing capability, the R1T is also quick. A 0-60 sprint takes just three seconds, which is faster than many supercars, and 0-100 reportedly takes less than eight seconds. The R1T is also built on what the company calls a “skateboard platform,” which packages the battery pack, drive units, suspension, and braking system below the height of the wheel. This allows the pickup to have an incredibly low center of gravity, and with unequal-length double wishbones up front, a multi-link setup in the rear, dynamic roll control, adaptive dampers, and ride-height adjustable air suspension, handling should be much sharper than one would think by looking at this 5,900-pound pickup.

On the inside, the R1T continues with its eco-friendly EV theme with sustainably sourced wood trim. The designers also made sure to use durable, easy-to-clean materials on areas of the interior that get the most wear and tear. A massive 15.6-inch central touchscreen dominates the sharp-looking wood-trimmed dashboard. In front of the driver is a 12.3-inch instrument cluster, and there is a 6.8-inch touchscreen in the rear as well.

The R1T really shines when it comes to storage. The R1T’s power-operated front trunk, also known as a “frunk,” features 11.7 cubic feet of storage, a lockable tunnel below the cab can stow another 12.3 cubic feet worth of stuff, and a space beneath the floor of the bed can cram in another 7 cubic feet. The bed itself, which measures over 55 inches in length, features three 110-volt outlets and a bed camera system that will alert the owner if someone is tampering with the bed’s contents. The R1T won’t be crash tested for some time, but the company ambitiously claims that the R1T is sure to get the highest available ratings from both the Insurance Institute for Highway Safety (IIHS) and the National Highway Traffic Safety Administration (NHTSA).

As a company, Rivian dates back to 2009, but this is the first solid production model we’ve seen. Rivian hinted at production vehicles back in 2011, but eventually shifted its focus to electric vehicles and the R1T is the end result of years of planning. Production will take place in Normal, Illinois at the old Mitsubishi plant that Rivian acquired in 2017. It is extremely difficult for upstart carmakers to be successful in this day and age. It remains to be seen whether Rivian will last, but the R1T pickup is a great start.