One of the best small cars you can buy. 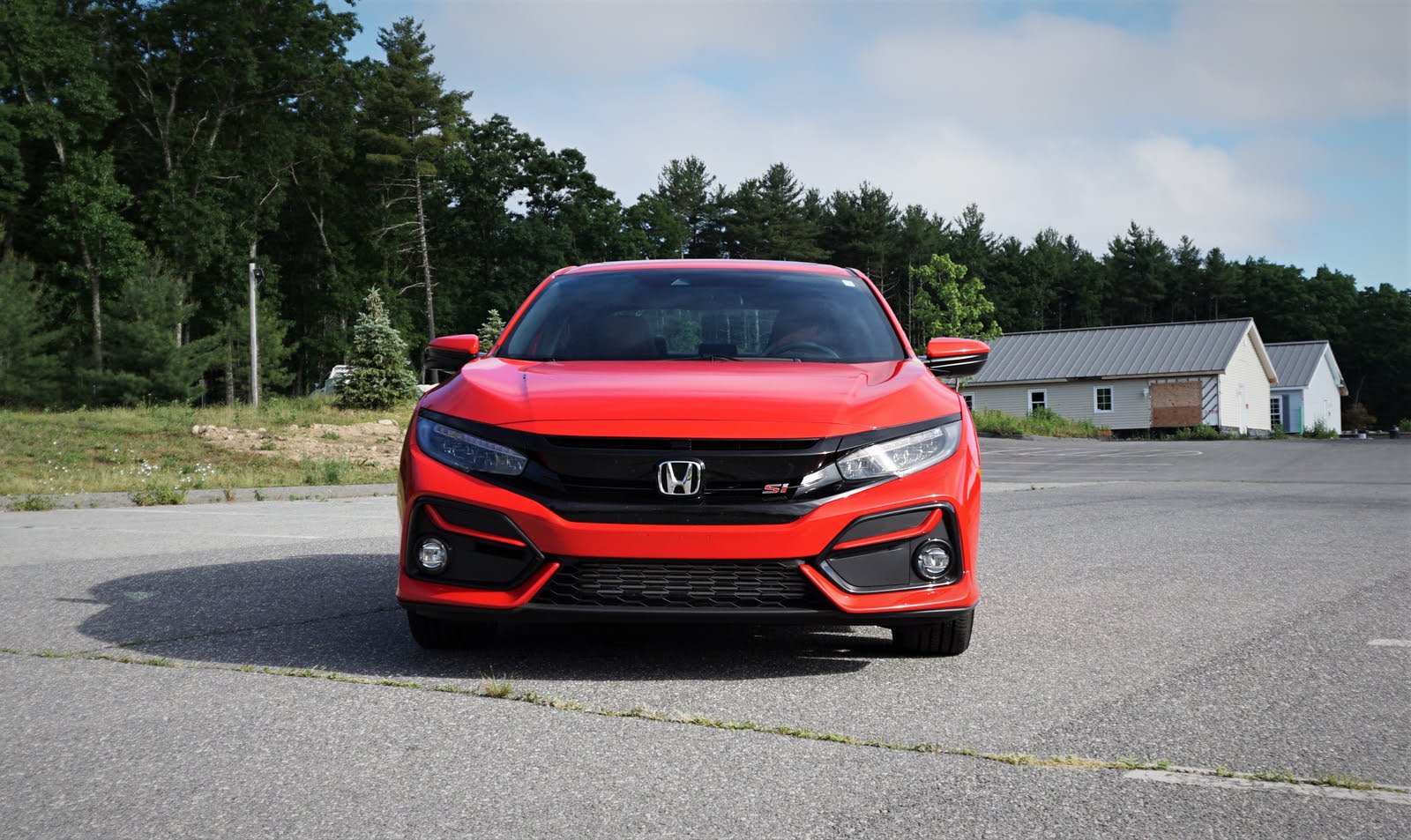 Minor design tweaks, more standard safety and convenience features, and more manual transmissions arrive as the standout changes for the Civic's 2020 model year. Last redesigned for the 2016 model year, the Civic keeps outperforming its small-car peers by offering the performance and quality of more expensive cars, while retaining the value and longevity expected of a Honda. Plus, I had a really fun week with the turbocharged Civic Si. 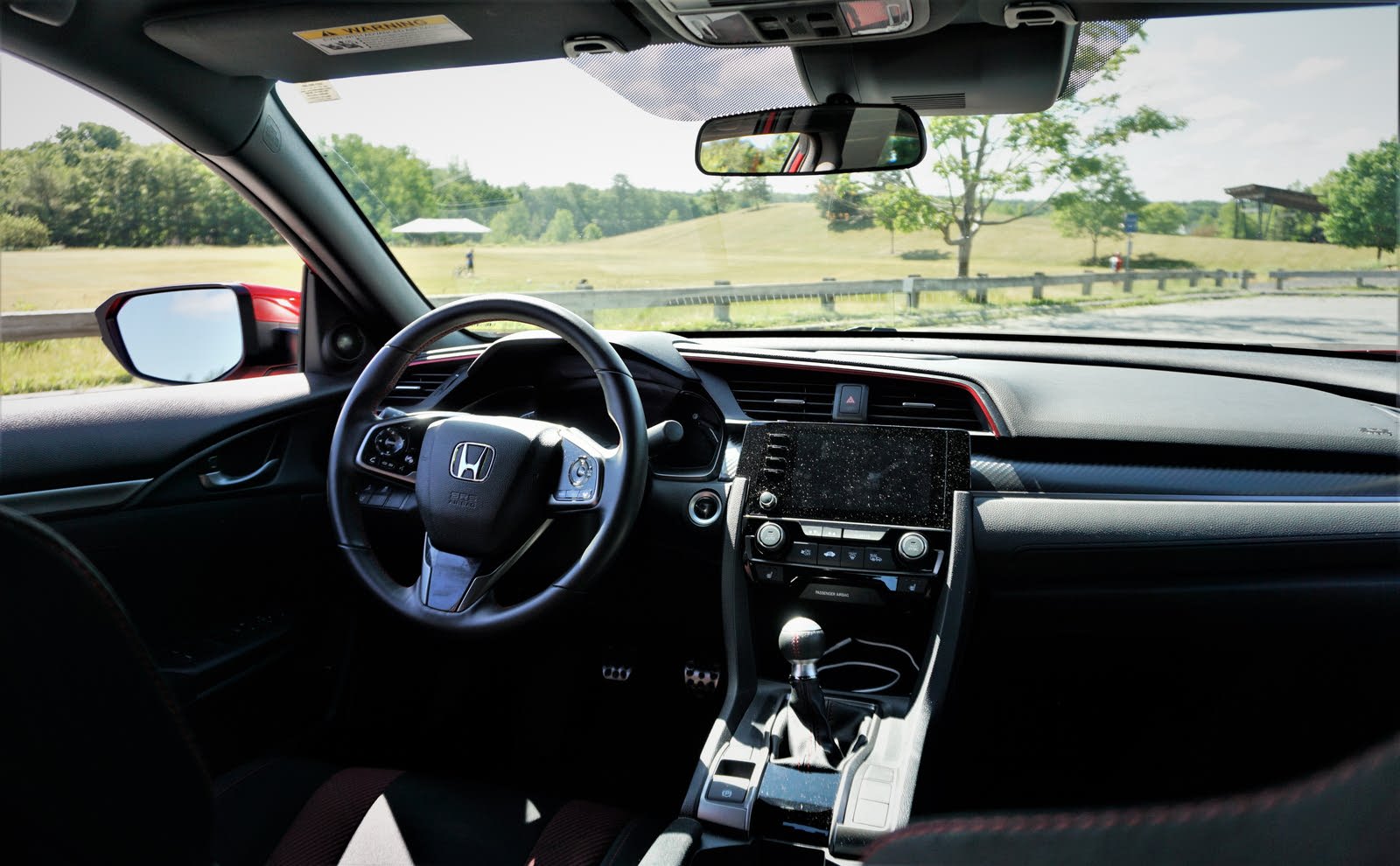 The Civic is the crown jewel in Honda's lineup—not the pricier Accord, the big Pilot, or the $150,000 Acura NSX supercar. This is a $20,000 compact car sold to the broadest chunk of buyers, who don't have a ton of money to spend, and yet Honda blesses them with a bounty of choices and a level of engineering excellence typically found at BMW. The Honda Civic comes in three body styles—sedan, coupe, and 4-door hatchback—that direct attention to its sharp design, not its small footprint. The sedan has the svelte roofline of the coupe, only the body is elongated and elegant. Body panel creases and wide, arcing headlights accentuate the car's low and wide stance, while large, sweeping LED taillights do the same for the rear. Proportionally, the Civic hatchback's tall rump is a tad quirky past the rear door and the Honda Civic Type R is the exaggerated car an anime character would drive. But there's nothing else I can knock at the Civic's exterior. It's visually stimulating without a whiff of cheapness.

The 2019 model year upgraded the grilles, bumpers, and wheels of the standard Civic sedan and coupe models. Those carry over for 2020, but on the Civic Si sedan I drove, there are new matte-black 18-inch wheels, LED fog lights with gloss black trim, standard LED headlights (which look like crystals when they're on or off), an updated grille, and a new rear bumper with more body-color and gloss-black trim. The same goes for the Si coupe. The 2020 Civic hatchback also gets the new bumper and light changes, plus new wheels in gray or black.

The simple interior, with its narrow center stack and minimal instrumentation, is built with soft-touch rubbers and high-quality switchgear. The hard plastics on the lower sections of the dash and on the doors are acceptable and have a fine grain. More gloss-black trim on the steering wheel and dash, the feel of the metal shift knob, the pulsing red glow of the start button, and even the way the central air vents play off their symmetry are all pleasing to the eye.

Interior styling changes for 2020 include three new dash accents on the hatchback (depending on trim), and for the Si, a thin red line accenting the instrument panel like on the Type R. The Si also gets revised sport seats with red bands woven into the fabric. 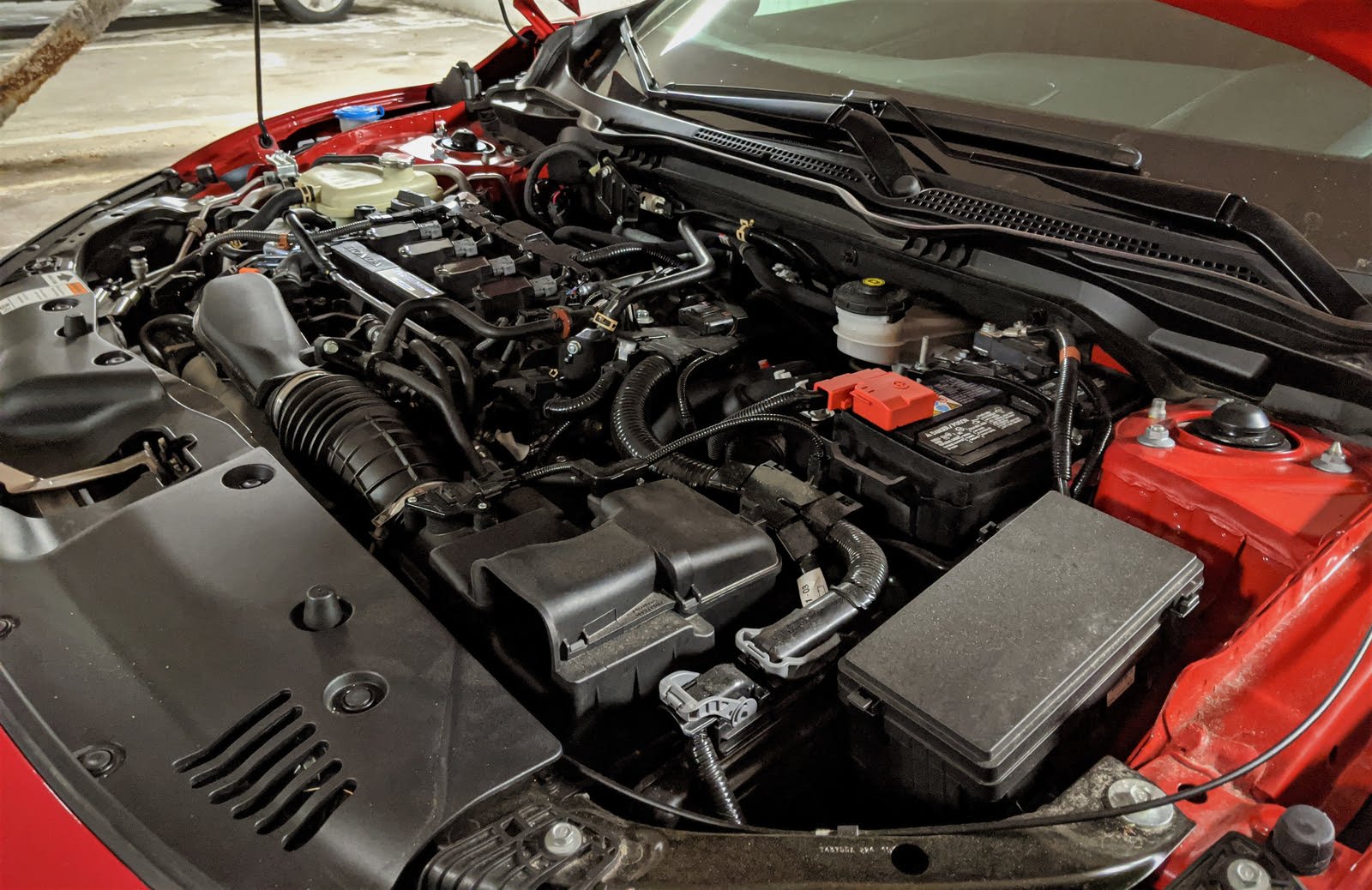 Four engines and two transmissions are available across the Civic lineup, all of which are front-wheel drive (FWD). The base LX and uplevel Sport have a 2.0-liter inline 4-cylinder engine with 158 horsepower and 138 pound-feet of torque. A 6-speed manual transmission is standard on both sedans, while on the Civic coupe and Civic hatchback, the manual pairs with the Sport, and a continuously variable transmission (CVT) is standard on the base LX. The CVT is an extra-cost option for the manual trims. All EX and above trims come only with the CVT and a turbocharged 1.5-liter inline-4 making 174 hp and 162 lb-ft. The hatchbacks, in Sport or Sport Touring, make 180 hp—and new for 2020, the manual is now standard on the loaded Sport Touring trim.

The 1.5-liter engine is preferred for greater mid-range acceleration and responsiveness. Honda engines are smooth, quick to rev, and are a delight to string through the manual's tight shifter (I flubbed a few times, as it's way tighter and shorter in throw than my own car's). The CVT responds well, too, without hesitation or peaking the engine to high revs for seconds on end. The powertrains are, in a word, flawless.

While the Type R is a delight—and remarkably composed despite ultra-thin 20-inch tires and all that power routed to the front wheels—the Si is more the everyday delight. Adaptive dampers come standard and really remove the body roll, though the Si rides noticeably stiffer than the regular Civic even in the normal setting. Still, without the available summer tires (a $200 option called HPT, for high-performance tires), the Si is balanced, direct, and always willing to play. The combination of a great suspension, precise steering, and a torque-rich engine without much torque steer make driving the Civic Si a thrill without making you public-enemy number-one to the police. There's some turbo lag, but the boost arrives in a linear, predictable fashion without overwhelming the car's steering or grip.

For 2020, Honda reduced the final-drive ratio by 6 percent. Shorter final-drive ratios improve acceleration in all gears, but can reduce fuel economy. And that's what happened to the Si: The EPA has rated it at 26 mpg city, 36 mpg highway, and 30 mpg combined (down from 28/38/32). That's still good and greater than the larger, less powerful engine in the base LX sedan (25/36/29). Else, most Civic models with the CVT hit at least 30 mpg city and as high as 42 mpg highway. 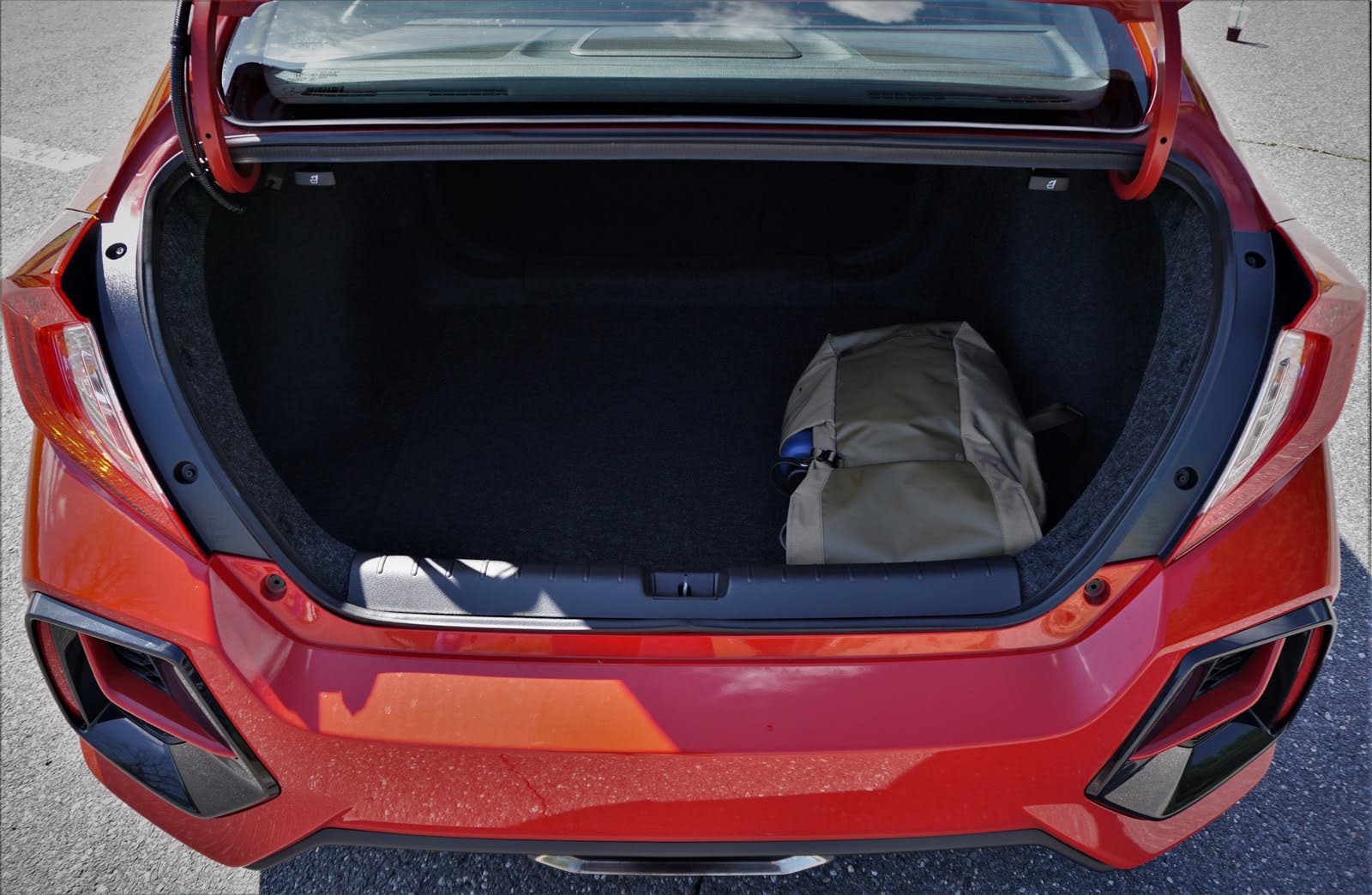 The big deal for 2019 was a volume knob and better cupholders. The hatchback now has more sound insulation in the floor, trunk, and wheel wells. On EX hatchback models, the driver's seat is eight-way power adjustable. Compared to how earlier Civic models equipped with the touchscreen also relied on touch-sensitive controls for the climate fan speed and stereo volume, it's significantly better.

The three-spoke steering wheel has controls for both the central display and the instrument panel's digital tachometer and speedometer panel, with easy access to recent destinations, audio sources, phone numbers, trip information, and more. Analog fuel and coolant gauges flank the tach. Honda's confusing push-button/pull-tab gear selector is not in the Civic. Instead, there is a conventional PRNDL shifter and the usual pull tab for the electronic parking brake. The center console has a deep storage bin with item trays and cupholders that slide along rails and are removable. It's nice that you can configure the Civic's storage just the way you want it.

With the coupe as the obvious exception, the Honda Civic feels considerably roomy for rear passengers in all directions. Two-stage heated outboard seats are a nice luxury, but Honda's major oversight is not including any rear air vents. People do enjoy breathing these days, don't they?

The trunk's cargo space is also very roomy, at 15 cubic feet in all sedan trims (minus a few unnoticeable tenths if you select the Touring model with the subwoofer). The Civic coupes have 12 cubic feet of cargo space. The hatchback is noticeably larger, at 26 cubic feet behind the rear seats and 46 cubic feet with them folded down. It's not Honda CR-V massive in there, but it'll let you take home that garden rake from the hardware store. 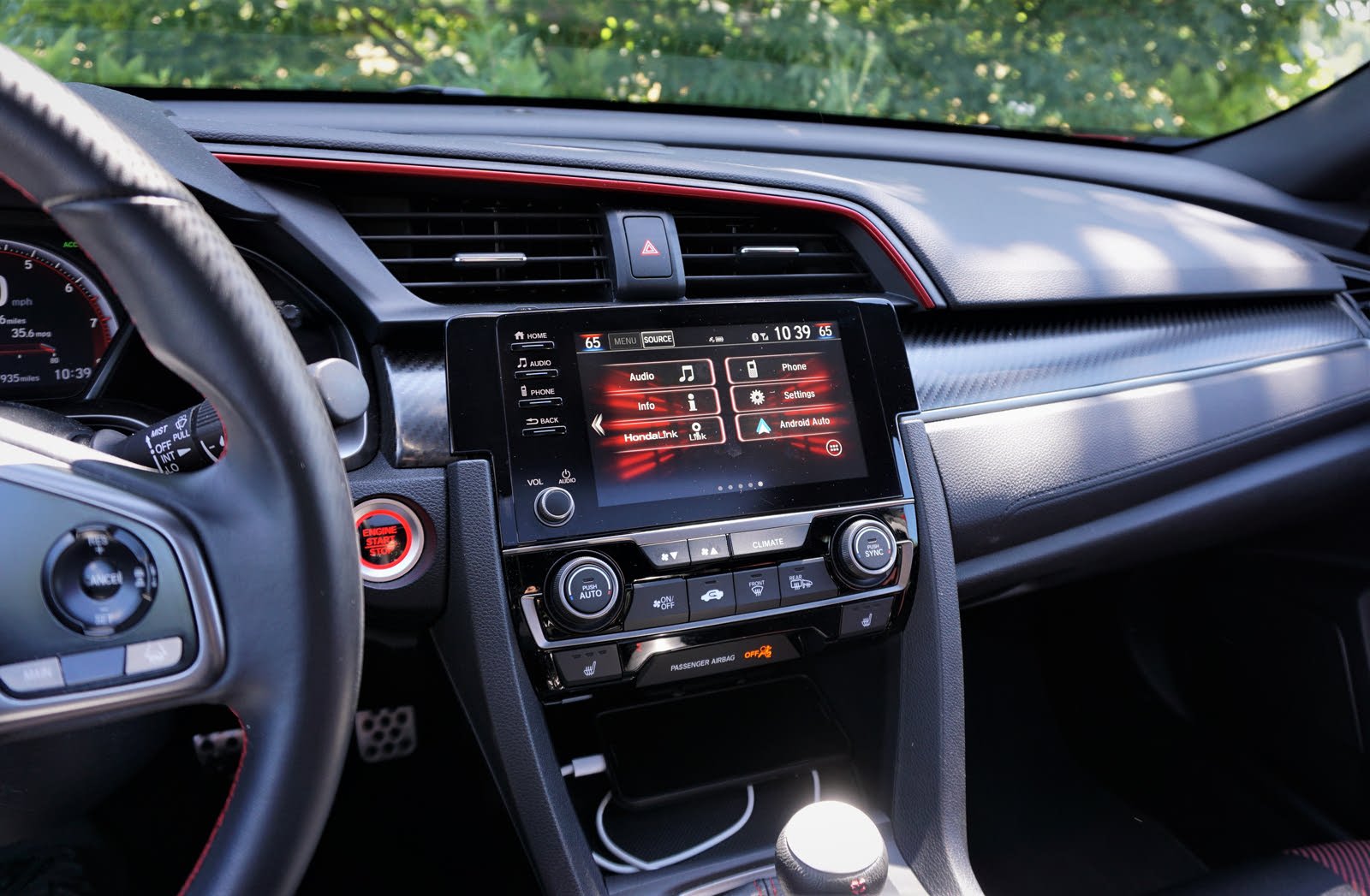 The Civic still uses an outdated infotainment system that runs slower, looks graphically dated, and remains too complex versus the new system in the Accord and other Honda models. This 7-inch touchscreen, now standard on all models except the base LX, comes with Apple CarPlay and Android Auto to let you bypass the factory interface. At least the navigation on top-end trims is Garmin-based, fast, and has accurate voice recognition. A garage-door opener is now standard on the Sport Touring hatchback.

New to the 2020 Civic Si is Active Sound Control, which pumps fake engine sounds through the audio system's speakers. I turned it off, because fake is fake (I played my own tunes through the Si's 450-watt, 10-speaker stereo). The Si also comes with standard push-button start, keyless entry, power moonroof, and heated front seats. What's also superb is LaneWatch, a camera mounted on the right-side mirror that reveals a live feed of your blind spot, with lines indicating how many car lengths there are from your bumper, whenever you activate the right-hand turn signal. It's very effective.

Automatic climate control is standard on all models, and now Si models get Honda Sensing like every other Civic trim, which features active lane centering, adaptive cruise control, and auto high beams. Leather is included on the EX-L sedan and hatchback, while rain-sensing wipers are on the Touring trim. LED headlights are included on Touring, Si, and Sport Touring models. 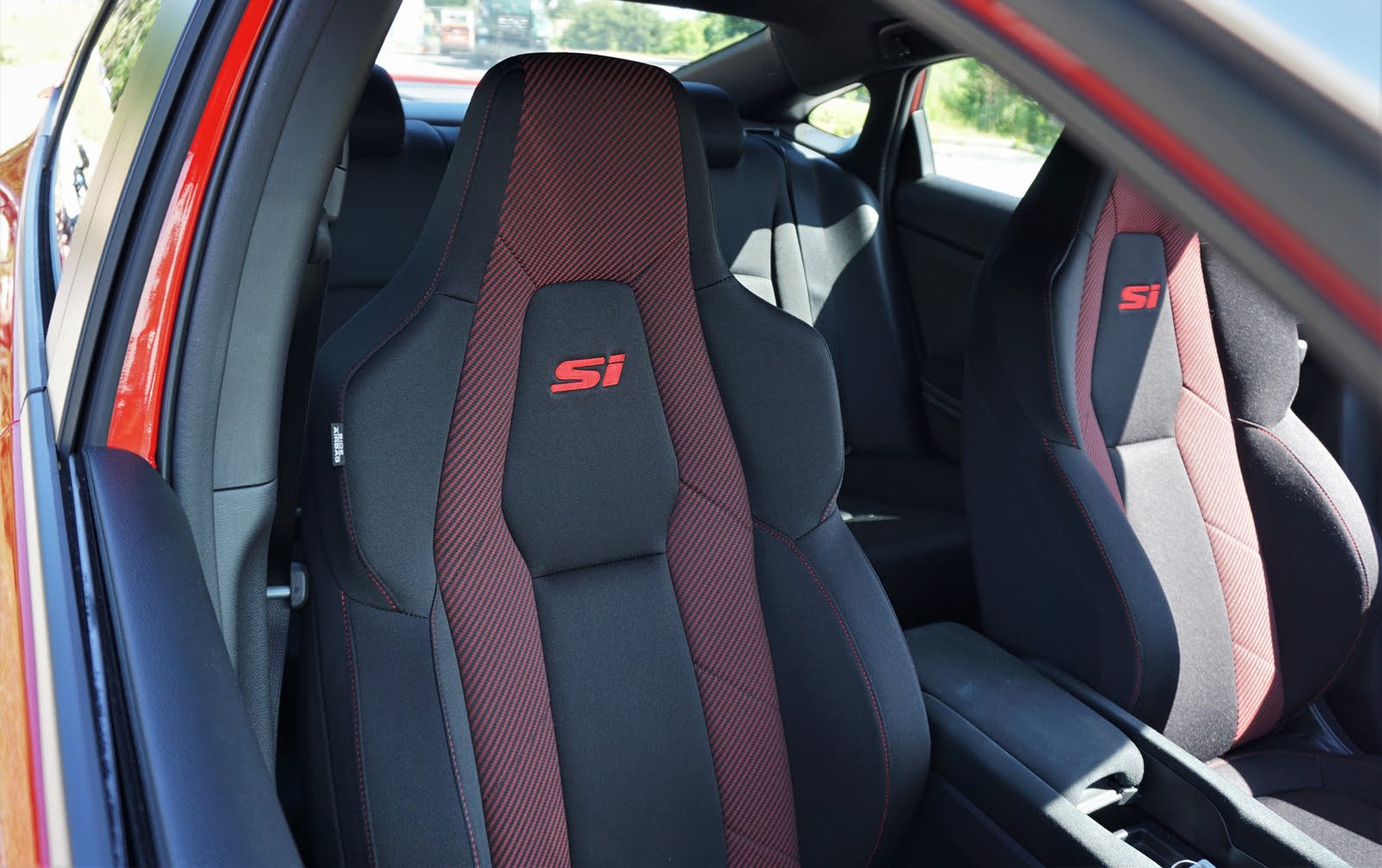 Honda Sensing comes with forward collision warning, emergency forward braking, lane-keeping assist, and adaptive cruise control. Honda made improvements to the optional LED headlights, which was the final straw to earn the Top Safety Pick rating from the Insurance Institute for Highway Safety (IIHS) for all body styles except the Type R, which wasn't tested. The Civic earned the top "Good" rating in all six crash tests. The National Highway Traffic Safety Administration (NHTSA) rated the 2020 Civic five stars in all categories, with the exception of four stars in the passenger frontal crash rating on the coupe. 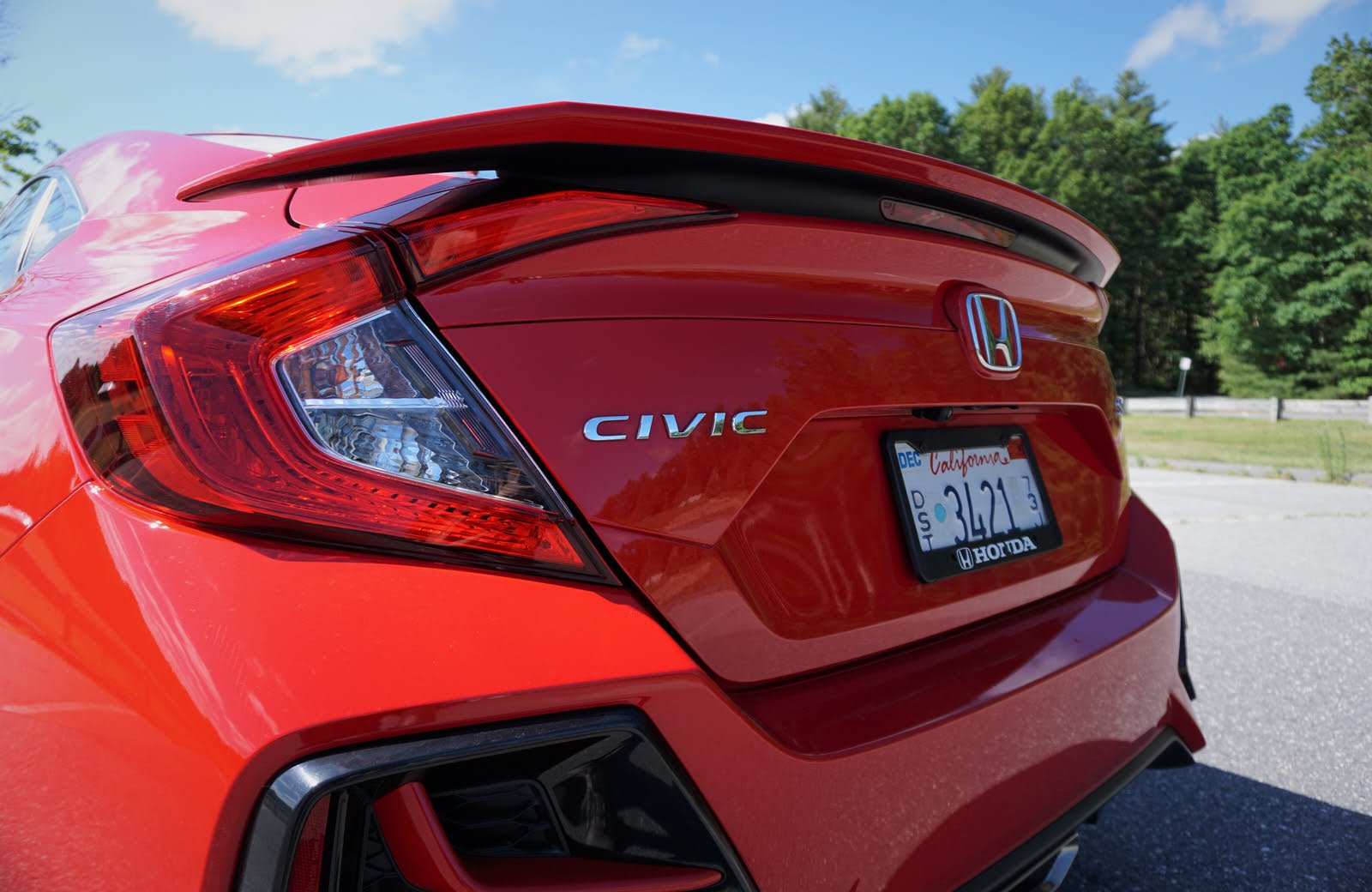 The 2020 Civic sedan starts at an MSRP of $19,750, the Civic coupe starts at $20,950, and the Civic hatchback at $21,650. Fully-loaded with a $930 destination charge, every Civic costs less than $30,000 except the Type R, which stickers for thousands more. In general, these prices put the Civic in a position just barely more expensive than the Kia Forte, in line with the Hyundai Elantra and Toyota Corolla, and slightly less pricey than a Mazda3.

My Si sedan test car was $26,155 with destination. Considering the level of performance, refinement, style, safety, and high quality baked into every Civic, these are great prices for an exceptional small car.

Guru39W2V Honda used to make a 2000 sports car that was superb. What happened?

Users ranked 2020 Honda Civic against other cars which they drove/owned. Each ranking was based on 9 categories. Here is the summary of top rankings.

Have you driven a 2020 Honda Civic?
Rank This Car

Hello My Name Is Edgar

i found a car in another dealer webside, i try to look your weside but is not showing the name of the dealr

My maintenance reminder indicated that I needed an oil change at 2900 miles. I thought new Hondas used synthetic blend oil, which should be good for 5000 miles. Do I really need an oil change now?

Is there a way to add a compass to a 2020 Honda Civic LX base model.

192 views with 2 answers (last answer about a year ago)

Why Are No Honda Civic Si Sedans Available?

It was announced in September but no one has it available.