The new Sierra 1500 AT4 is far too nice to be a work truck, but it represents what modern pickup shoppers seek. 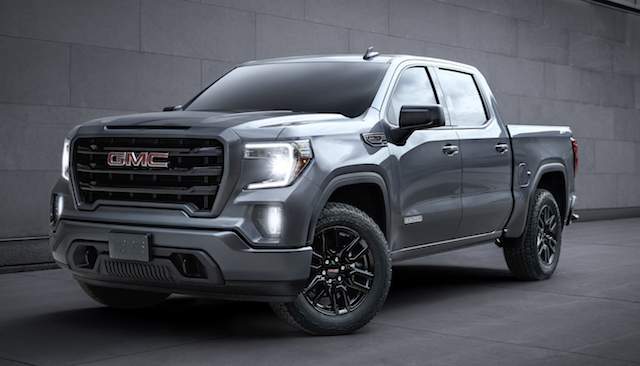 It’s no surprise that trucks have improved and evolved over the years. After all, think about an average sedan from the early 1980s compared with a modern 2020 vehicle. Yet because pickup trucks are largely confined to a common shape, many shoppers are still surprised to see how nice they have become. This is especially true if your memory of trucks includes a vinyl bench seat.

Modern trucks heavily incorporate utility-minded innovations. Cargo-management tools, side steps, and bed steps make for a more useful vehicle. Under the hood, turbocharging has made V6 and even 4-cylinder engines usable, delivering the power of the larger engines they aim to supplant. And finally, cabins have become nicer and more comfortable than previously imagined for a pickup.

This evolution speaks to how trucks get used as family vehicles that can also do work. There are the work trucks, but there are also trucks like the 2020 GMC Sierra 1500, which has many of the creature comforts of SUVs and crossovers. It says “I want a truck, but I could probably be used as a minivan.”

But somewhere in the middle sits Sierra's AT4 trim. It’s comfortable, sure, but it’s also capable. Does that make it a good fit for both the worksite and the daily commute? 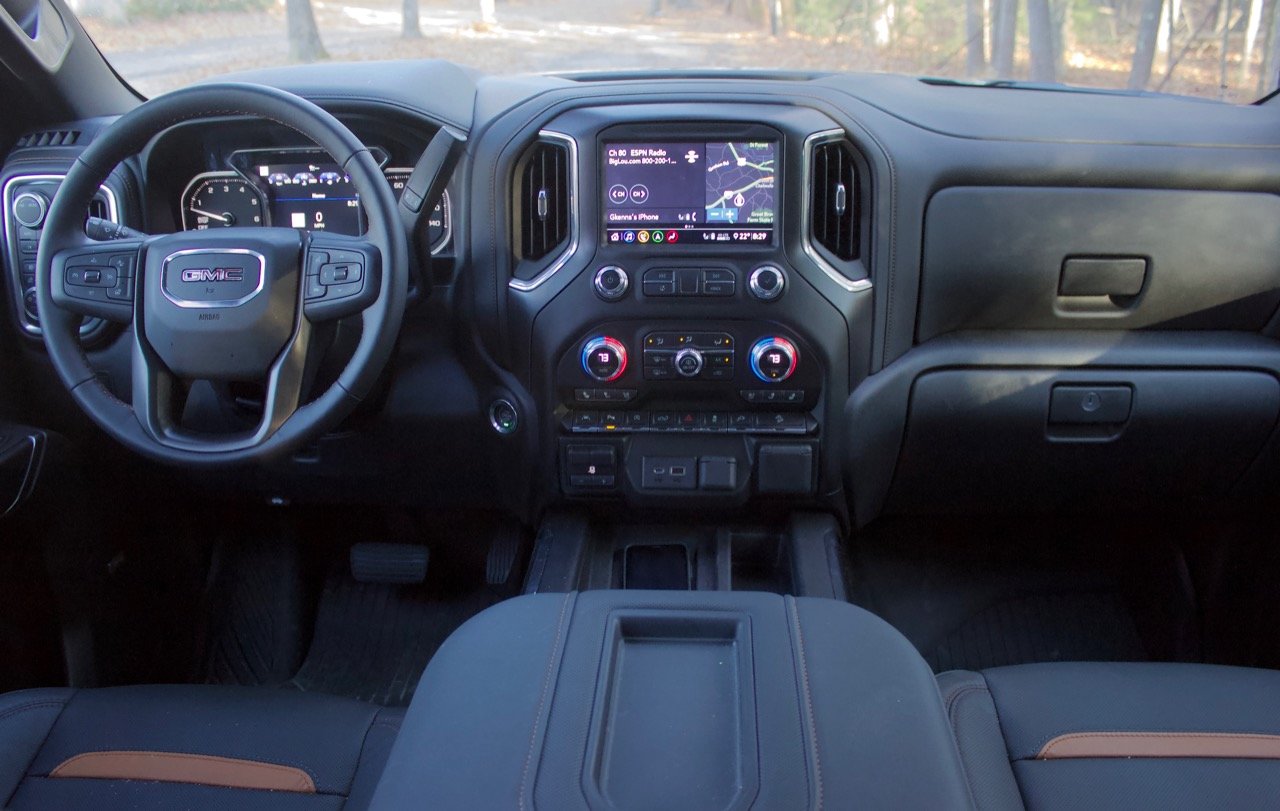 GMC completely redesigned the Sierra 1500 in 2019, and the truck carries into the 2020 model year largely unchanged. This is a smart evolution from the Sierra's previous generation, which had a design I liked a lot. The straight lines and crisp angles underscored a kind of understated, timeless stoicism, similar to the “GMT 400” trucks from the late 1980s and '90s. I could almost hear Bob Seger’s “Like a Rock” playing when I looked at those trucks.

Inside, you’d be forgiven for confusing the 2020 Sierra for the old 2018 truck. Its layout remains nearly identical, although the dash seems flatter, resulting in a weird jukebox look. But all the controls are where they need to be, and as we’ll explain later, that’s what really matters.

The Sierra is available in six trims, Base, SLE, Elevation, SLT, the range-topping Denali, and the AT4 we drove. The Base truck comes decently equipped with a V6 engine, a 7-inch touchscreen, Apple CarPlay, Android Auto, Bluetooth connectivity, a USB port, and LED “light blade” headlights. Moving up to the SLE trim adds an additional USB port, a WiFi hotspot, a larger 8-inch touchscreen, and remote keyless entry. It also opens up a host of available option packages.

GMC offers the Elevation in double-cab and crew-cab configurations, and it brings a unique look that includes body-color bumpers, door handles, and grille surround. These body-color touches are set off with 20-inch wheels and black accents for the grille and tow hooks. Inside, the Elevation comes standard with heated front seats, remote engine start, and a heated steering wheel. The SLT has many of these features, but with more classic, chrome-clad styling.

We drove the AT4 trim, which has many of the features found on the range-topping Denali, but less chrome. As "bright and shiny" falls out of fashion, GMC has been wise to create the AT4 sub-genre to capitalize on changing tastes. The AT4 is also the off-road-oriented version of the Sierra, and it features unique touches like all-terrain tires and red tow hooks. Inside, the seats of the AT4 are covered in black leather with brown accents, and they give our test model an upscale quality while retaining a touch of ruggedness. That’s really what most modern trucks are all about.

The Denali continues to set the bar for pickup-truck luxury. It comes with plenty of exterior chrome accents, massive 22-inch wheels, a head-up display (HUD), navigation, and wireless device charging.

CarGurus recommends the SLT trim. It features many of the creature comforts found in our test model, but with a bit more road-friendly setup, including more compliant tires and suspension. 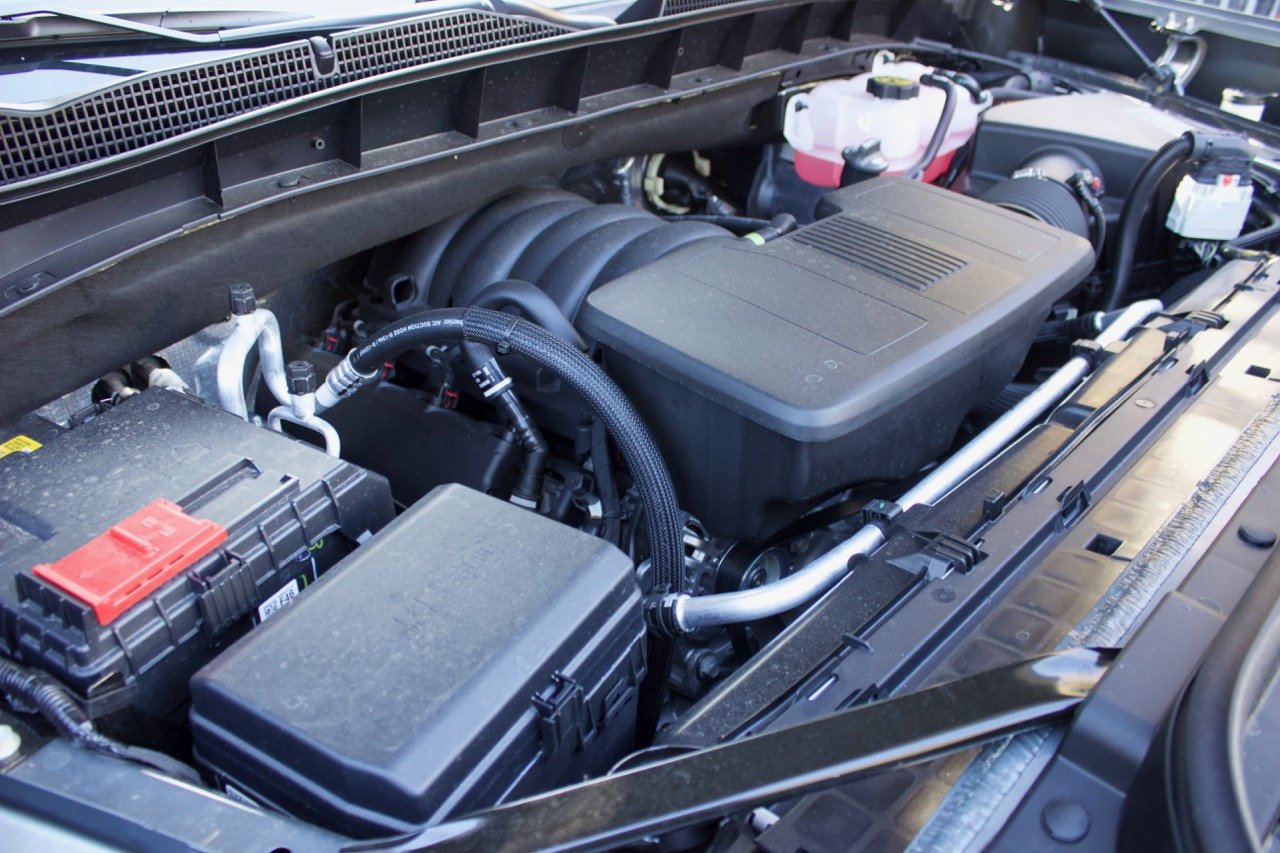 The Sierra offers you a choice between five engines, which seems like a lot. The base engine is a 4.3-liter V6 that’s seemingly been around forever, tracing its roots back to the 1980s, with incremental improvements through the years. For 2020, it makes 285 horsepower and 305 pound-feet of torque.

Every single one of these engines routes power through an automatic transmission to the rear wheels or available 4-wheel drive (4WD). That 10-speed transmission is operated via a column shifter, which is a good thing to see compared with the rotary dial of the Ram 1500 and the center-console shifter of the Ford F-150. Frankly, I don’t care how nice these trucks get, a real truck should have a plain old column shifter.

The 4WD system has a low range and is a simple push-button unit. It offers settings for 4-high, 4-low, 2-wheel-drive (2WD), and auto, which will automatically shift into 4WD if the truck loses traction.

The big 6.2-liter V8 we drove delivered commanding acceleration and provided that classic V8 “swell” of power. It will easily squeal the tires when jumping off the line, but more impressively, its 60-80-mph acceleration is relentless. At any speed, the 6.2 feels like it has more power on tap. When properly equipped, the Sierra 1500 can tow up to 12,100 pounds, which is more than most people will ever need.

In addition to the powerful V8, the AT4 trim has beefed-up skid plates, upgraded suspension components, and hill-descent control. It also has knobby off-road tires, which allow it to claw away at dirt and rock. When combined with the Rancho off-road shocks, the Sierra AT4 feels right at home on the trail, even if it is a bit snug on most single tracks.

The tires and suspension that allow the Sierra to be so confident on the trail unfortunately also make for a pretty rough on-road ride. Over everything but the smoothest surfaces, there will be a lot of chatter from the chassis. If you like the idea of a well-equipped truck, but with a more-road friendly ride, try the SLT trim. 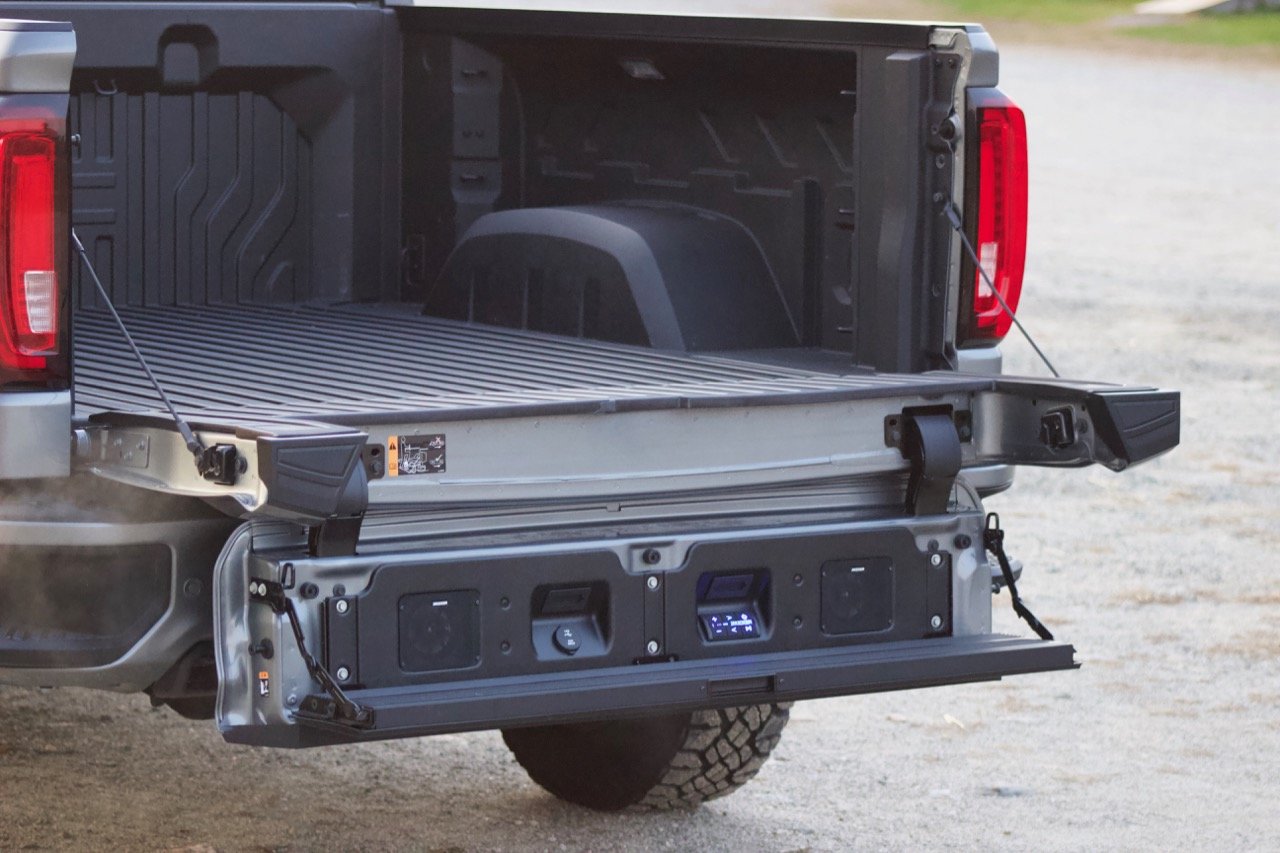 You can buy the Sierra with a single cab and a long bed, a double cab with a standard-size bed, or a full 4-door crew cab like our test model, which is available with either a standard bed or a short bed.

Our test model also featured GMC’s new carbon-fiber bed and MultiPro tailgate. The carbon-fiber bed reduces weight, which helps conserve fuel. Production costs for carbon fiber have come down, otherwise, this truck would cost as much as a supercar!

The MultiPro tailgate is a six-way tailgate that can work as a bed-extender or an easy set of steps into the truck bed. This works in addition to the corner bed steps, which many prefer because, frankly, they have less chance of breaking over long-term use.

As for using the tailgate normally, it will open with the push of a button in the cab, on the key fob, or on the gate itself. It is not power open-close, which is available on the Silverado. Frankly, the button-release on the actual tailgate is a bit frustrating, as most truck drivers expect there to be just a handle to grab.

The cabin itself is loaded with cupholders, cubbies, and storage units of all kinds. This is an area where trucks have gotten incredibly impressive, and I’d be shocked if truckmakers can find another place for cupholders or trays for your stuff. In addition to all this, the rear seats fold upward, providing a large storage area in the cabin of the truck, which is helpful for valuable items that you’d like to put behind locked doors. 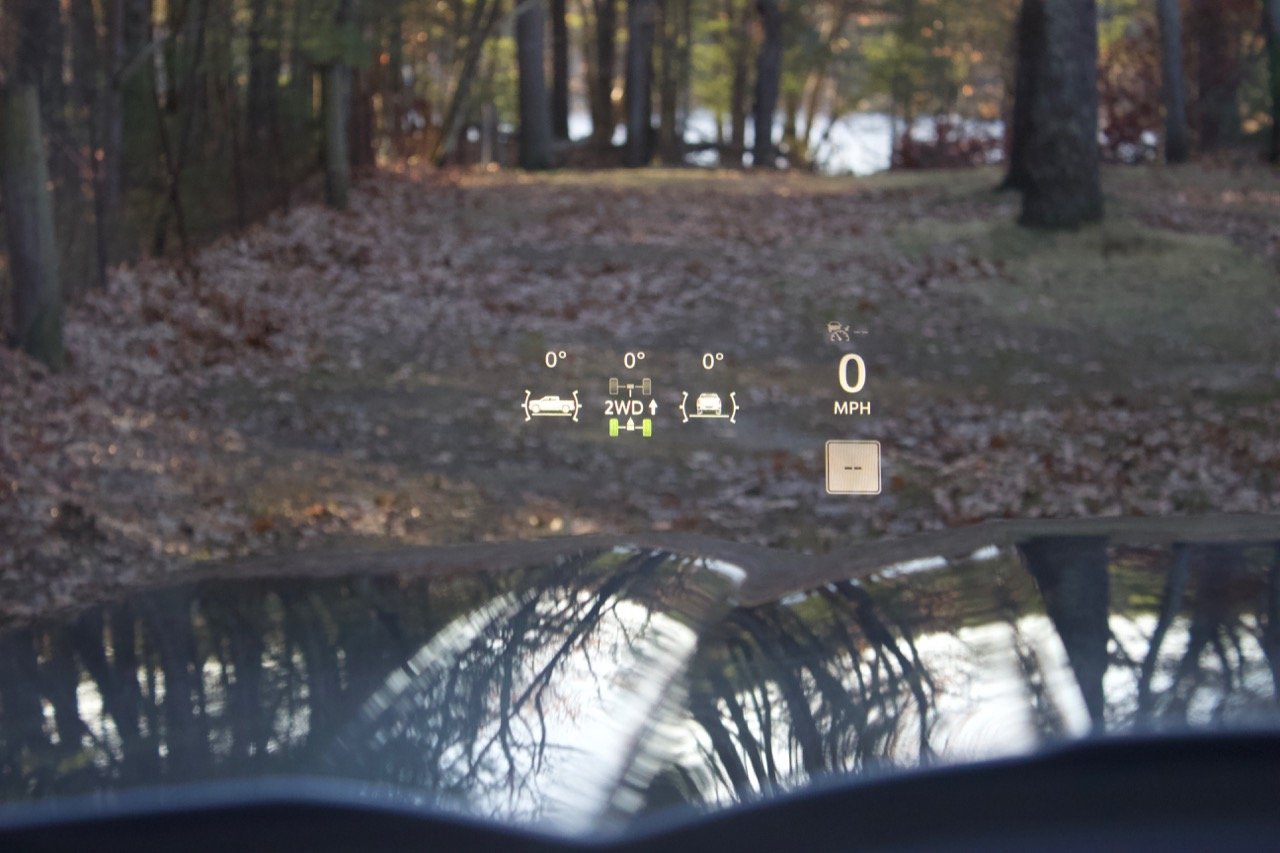 As previously mentioned, the Sierra has straightforward controls, and a key part of that is the simplicity of the infotainment system. It offers incredibly clear, crisp graphics, large icons, and a sensible menu. This system is also complemented by tactile controls for the radio and climate controls.

The most recent Ram 1500 has a massive Tesla-size touchscreen, and given that we’ve seen similarly massive screens from Ford in the new Explorer and Mustang Mach-E, it’s likely only a matter of time before the next-generation F-150 gets one too. Those massive touchscreens are flashy, but I still prefer systems like the Sierra's, which keeps the correct functions off the screen with tactile controls.

Our AT4 trim also featured an HUD, wireless charging, and multiple USB ports and outlets. But thankfully, all the controls are pretty straightforward. 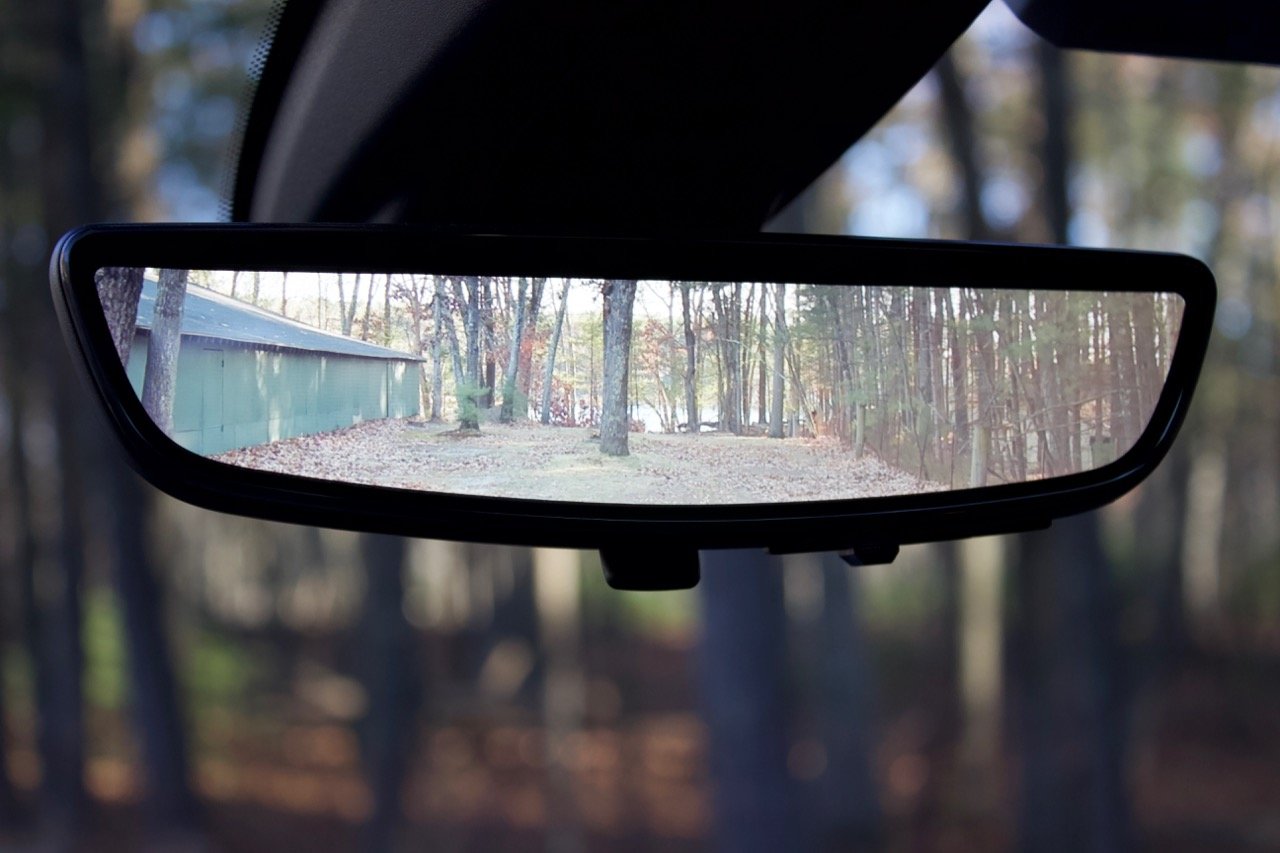 Standard safety features include a reversing camera, traction control, and a full array of front- and side-impact airbags. Our AT4 test truck came with many available safety features, including a vivid surround-view camera and front and rear parking sensors. It also came with a full suite of driver assistance features, including forward-collision warning, lane-departure warning, automatic high beams, and adaptive cruise control. You can also get blind-spot monitoring, lane-keeping assist, and rear cross-traffic alert.

The Sierra also features GM’s recent development: the rear camera mirror. With this system, one of the several rear-facing cameras can be projected on the rear-view mirror with the flip of a switch, replacing the mirror's natural reflective image with a digital image. It takes a bit of getting used to, but it does help with obstructions, and you can always turn it off with the flip of a switch. 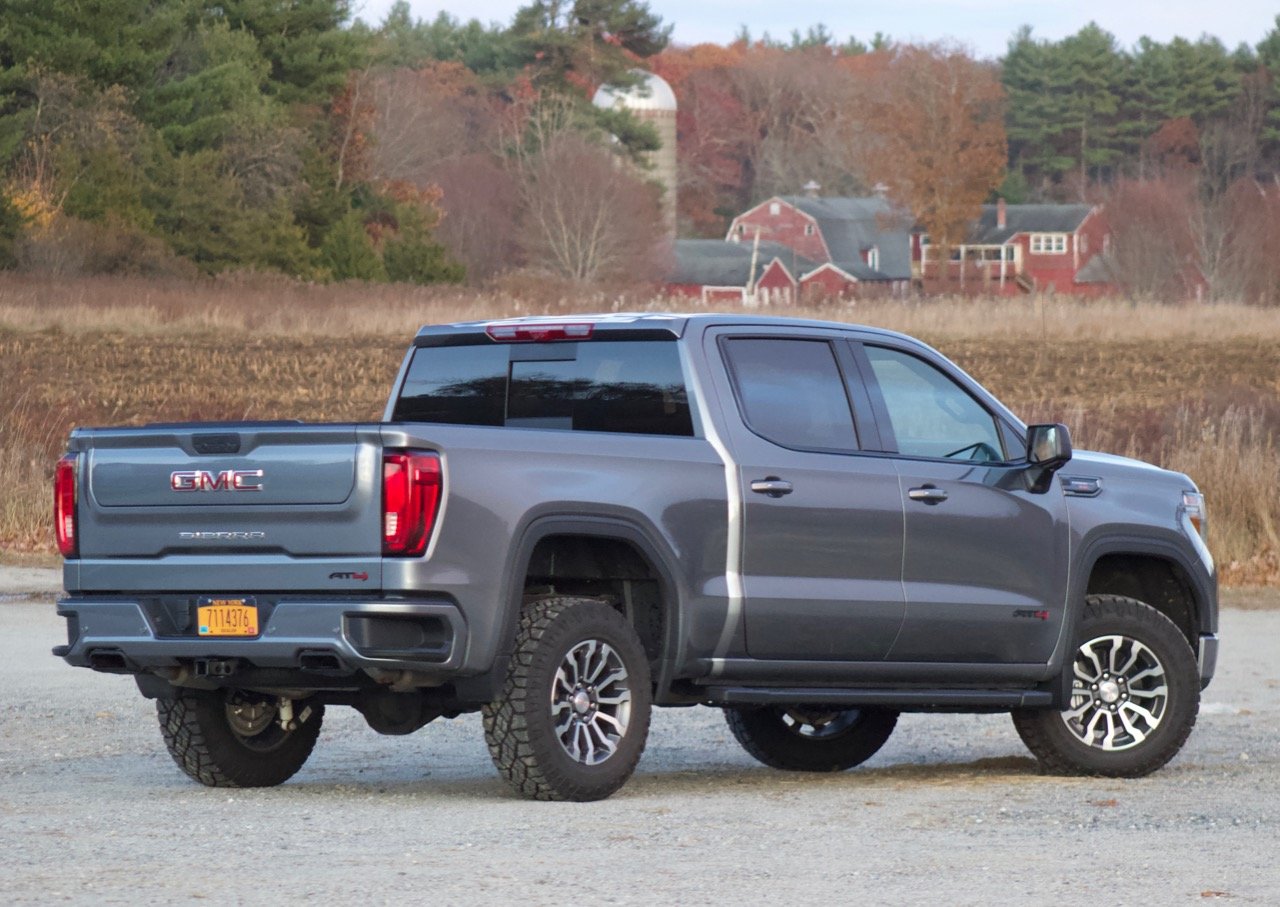 Our AT4 test model with all the options comes in at more than $66,000. And while that’s certainly pricey, it’s not the most expensive Sierra 1500 you can get—far from it, actually. A range-topping Denali Crew Cab can cost more than $70,000 with options.

GMC has shown it understands how its trucks are actually being used. Sure, it makes bare-bones trucks for work crews, but the Sierra AT4 is for weekend warriors who use their truck as a capable commuter vehicle, and who may also need it to carry some tools or a load of loam when needed. The AT4 strikes the ultimate blend of comfort and capability, to the point where I honestly don’t know where the pickup truck market goes from here.

I have a 2020 GMC AT4 that I replaced my headlight assembly but my headlight still does not work. Is there a trick to make the light come on?

How Do I Find My Listing

2 views with no answers yet
95

Park Assist Not Funtioning,is There A Repair?

Park assist not functioning only 2300 miles, is there a fix for it?

395 views with 3 answers (last answer about a year ago)

I will be towing a double axle utility trailer total maximum weight on the hitch will be 5000 pounds. Plus a maximum weight in the truck bed including passengers will be 2500 pounds. I have no ...

20 views with 4 answers (last answer about a year ago)

I bought a second house in Vermont but live in Idaho