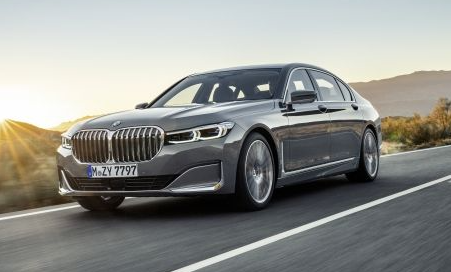 The BMW 7 Series goes into 2020 with a scheduled facelift, sporting revised styling, updated features, and new engines. It competes with the Audi A8, Jaguar XJ, Lexus LS, and Mercedes-Benz S-Class.

It’s hard to ignore the 7 Series’ updated front end with its new grille, which BMW says is about 40 percent larger than the previous one. It’s similar to the latest designs on the X3, X5, and X7. But the grille update is as much for function as style, as it contains adjustable vanes that open only when the engine needs additional cooling. Framing the 7 Series’ new grille are standard LED or optional laser headlights. Beyond that, BMW revised the side trim, rear lights, bumpers, and wheel options on both its standard and M Sport trims for the 7 Series.

The interior of the 7 Series includes subtle updates. The biggest is the new instrument cluster, which is larger and sports improved graphics. It’s accompanied by the latest version of BMW’s infotainment system, iDrive 7. Tweaks to the cabin include new window motor units with improved movement and heightened levels of acoustic comfort overall.

As before, the 7 Series is split into four distinct trims. At the beginning of the lineup, you’ll find the 740i, which benefits from a turbocharged 3.0-liter inline 6-cylinder engine. It’s capable of 335 horsepower and 330 pound-feet of torque, enough to get you to 60 miles per hour in just 5.3 seconds with the standard rear-wheel-drive (RWD) system and 8-speed automatic transmission. With BMW’s optional “xDrive” all-wheel-drive (AWD) system, that decreases to 4.8 seconds.

The 750i xDrive features an improved version of the previous twin-turbocharged 4.4-liter V8. Engineers managed to coax another 80 horsepower and 74 pound-feet of torque from the engine, for total numbers of 523 and 553, respectively. You’ll hit 60 mph in a scant 3.9 seconds.

If that isn’t enough for you, the prestigious M760i xDrive remains an option. Inspired by BMW’s “M” range of high-performance cars, it carries the largest engine in the lineup, in the form of a twin-turbocharged 6.6-liter V12 engine capable of an astonishing 600 hp and 627 lb-ft. That allows it to rocket to 60 mph in 3.6 seconds. It receives the brand’s M Sport look standard.

Lastly, the 7 Series’ plug-in-hybrid option returns wearing a 745e xDrive badge. While the old version paired a 4-cylinder engine with electric propulsion, this new one uses a larger 6-cylinder engine, a 113-horsepower electric motor, and a 12-kilowatt-hour battery in place of the old 9.2 kWh pack. Altogether, this setup produces 389 horsepower and 442 lb-ft. The 745e xDrive reaches 60 mph in a record 4.9 seconds. As of this writing, official fuel-economy numbers, including electric-only range, are not available.

In addition to its multitude of submodels, the 7 Series continues to boast an impressive level of customization and choice. Inside, you can select from Dakota, Nappa, or Merino leather grades in several colors. BMW also added new wood veneer choices: American Oak Dark or Poplar Grain Metallic. And, while the standard 7 Series includes a rear bench seat, Rear Executive Lounge seating remains an option for the 750i xDrive and M760i xDrive. This type of seating features a set of power rear bucket seats, individual climate control, active massaging, and a rear console that includes a BMW tablet. You can also specify a rear-seat entertainment system with two 10-inch HD displays and a connected Blu-ray player.

The full-size-luxury sedan market is cutthroat, with each model attempting to outdo its competitors in grandeur, comfort, speed, technology, and style. In that regard, the enhanced 2020 7 Series defends its spot at the table. Look for it to arrive at dealerships later in the 2019 calendar year.

GuruC9JHQ You guys always forget to mention the top-of-the-line model, the Alpina B7. But it’s ok, it’s an insider precious metal;-)