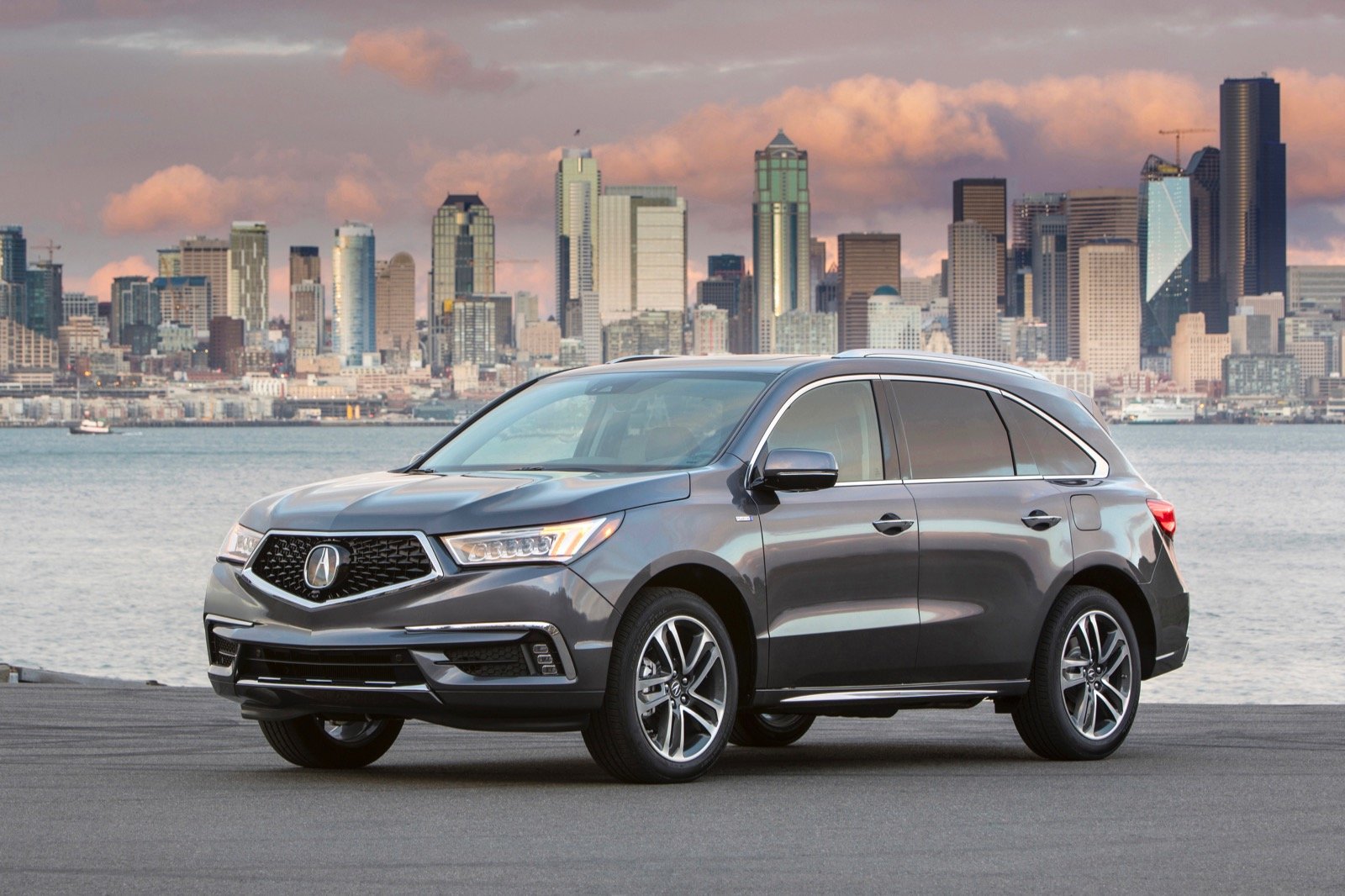 The Acura MDX is the best-selling three-row luxury SUV of all time, with solid performances through three generations of production since 2001. While it may not be an industry leader in any one category, the MDX delivers competitive levels of comfort, convenience, and technology and an attractive overall package that has spawned a loyal repeat audience. 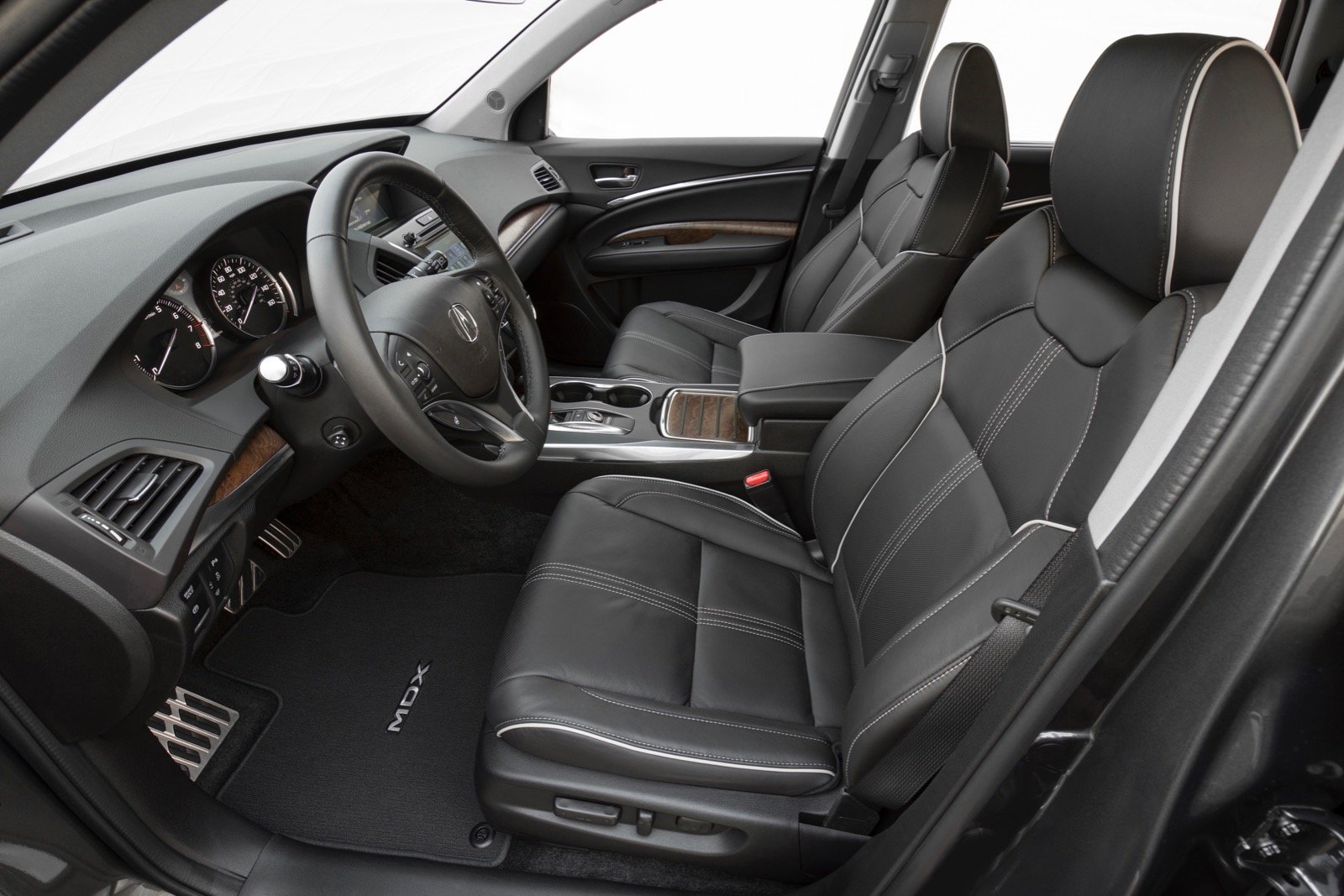 The Acura MDX is a good-looking crossover SUV, though few would describe its styling as groundbreaking or breathtaking. It’s not going to get attention in the parking lot, or preferential parking from the valet at the country club. Neither will it shame its driver. It will simply fit in, and sometimes, that’s good enough.

Acura was one of the early automotive adopters of LED headlights, and its signature Jewel Eye headlights not only add function to the MDX, they also give a rich look to the front of the vehicle. Unlike incandescent headlamps that feature one or two lamps per side, the Jewel Eye lights array five LED elements per side, arranged horizontally in a housing with the turn signals and running lamps. The headlights flank a trapezoidal grille with a big Acura logo at the center, anchoring an expressive face.

For a three-row SUV, the MDX is pleasantly sleek and low-slung, with chiseled details and a fast roofline. Paint and chrome are flawless, always an Acura strength.

Inside, the look is similarly modern and simple, without a lot of the padding and stitching that seems to be proliferating in luxury interiors nowadays. The center stack is a highlight, with twin infotainment screens—a high-mounted 8.0-inch LED screen for the navigation system over an On Demand Multi-Use Display (ODMD) touchscreen and three rows of buttons with a big command wheel at center.

Thanks to a high-quality level in material selection and superior fit and finish, the MDX feels particularly solid and well-built. Knobs and switches actuate with authority; materials have a rewarding feel. 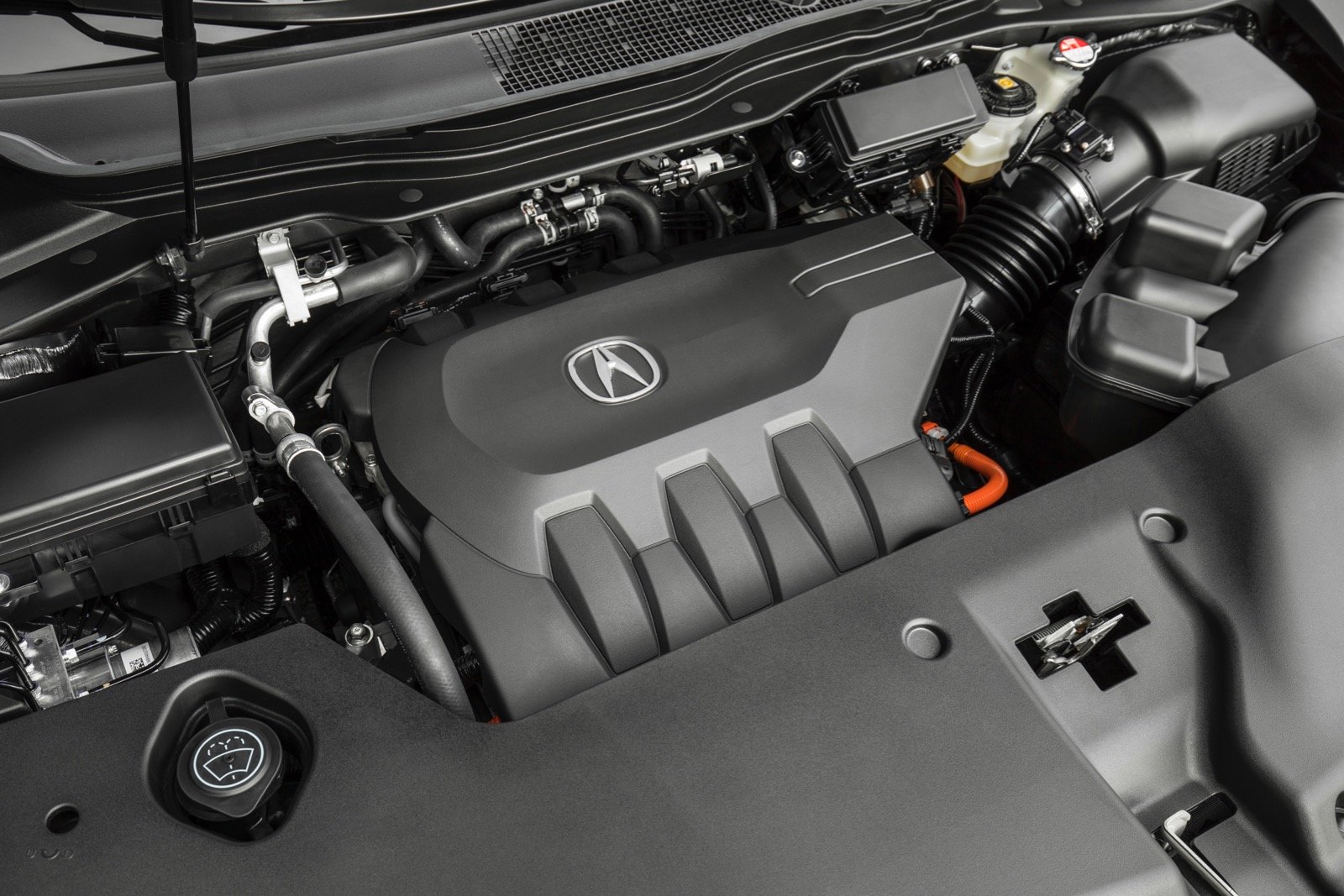 The 2020 MDX comes with a choice of two powertrains: a naturally-aspirated 3.5-liter V6 engine with direct injection and variable valve timing, tuned to produce 290 horsepower and 267 pound-feet of torque. It's coupled to a nine-speed automatic transmission, with a choice of front-wheel drive or all-wheel drive. Alternatively, the MDX Sport Hybrid uses a 3.0-liter V6 gasoline engine and three electric motors, tuned to produce a combined system power of 321 hp and 289 lb-ft of torque, and hooked up to a seven-speed dual-clutch automatic transmission (DCT) and all-wheel drive.

For this review, we drove a gasoline-only model with Acura’s Super-Handling All-Wheel Drive system—or SH-AWD for short.

The MDX displays good straight-line performance, with enthusiastic takeoff and acceleration. Paddle shifters to allow for sequential shifting, but the transmission is so well-behaved that merely selecting the right drive mode (Comfort or Sport) delivers the shifts right where you need them.

It is surprisingly nimble in corners and curves, especially with SH-AWD, which incorporates torque-vectoring technology. Torque vectoring directs power to the outside wheel during a cornering maneuver, which has the effect of sharpening turn-in and improving handling. It’s a subtle, yet effective technique that makes the MDX easier to drive quickly. This feature is best demonstrated in the MDX when accelerating from a standstill around a corner. With many vehicles, this can unsettle the car, and maybe even threaten to break the rear tires' grip or engage traction control. In the MDX, the power is seamlessly directed to the outside rear wheel, and the car smoothly pulls through the turn—no drama, no squealing rubber, no insecurity. It’s quite impressive.

The MDX’s four-wheel independent suspension soaks up the bumps in the road, making it a comfortable companion for a long drive or ride. 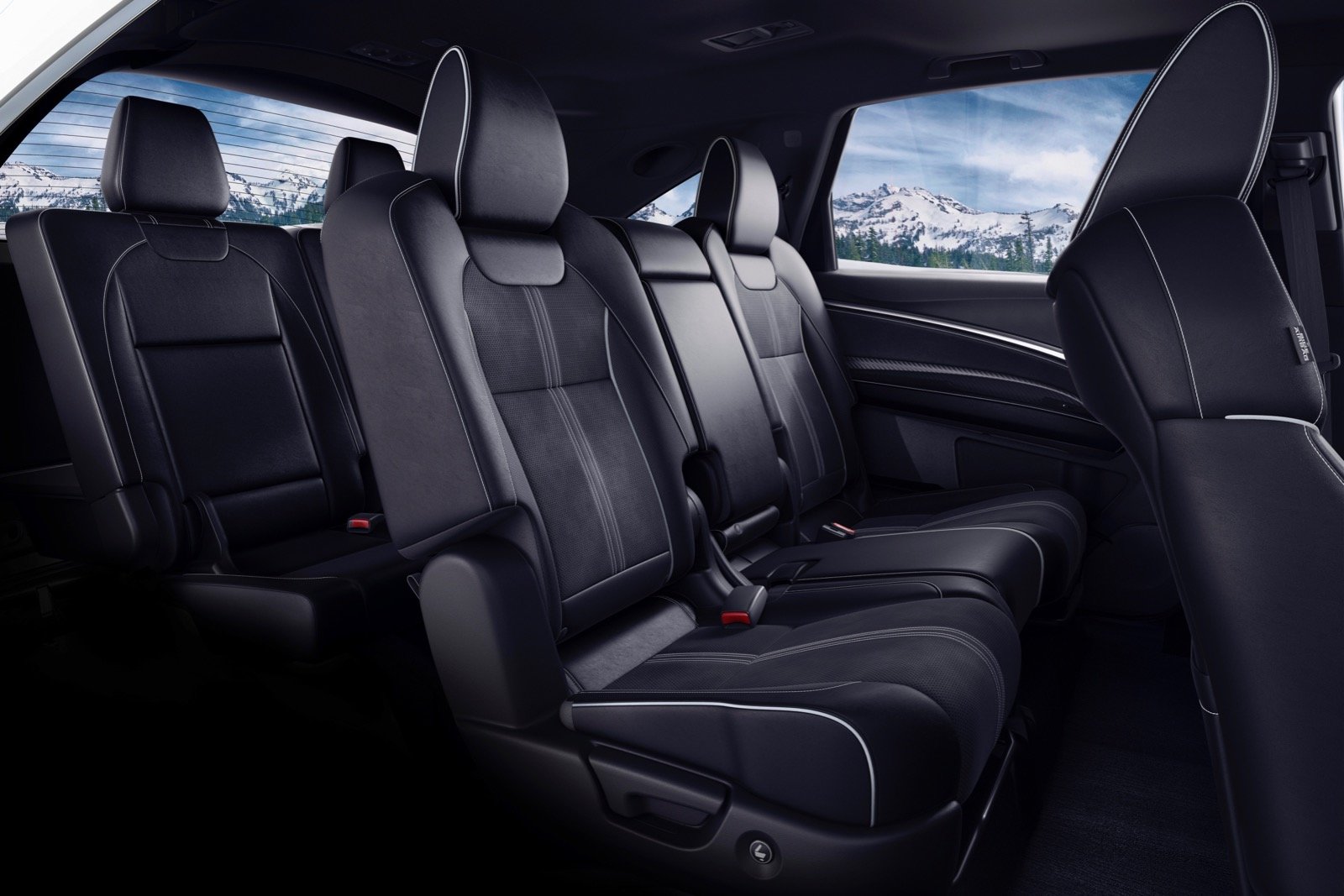 Three-row SUVs have replaced minivans as the default choice for families with two or more children, and have adopted some of the functional innovations that were once the province of those now-unfashionable vehicles. The MDX has sliding and reclining second-row seats, which make it much easier to get into and out of the third row, and also allow you to share the legroom between rows to match your needs. Headroom is good in all three rows.

There’s room for 15.8 cubic feet of luggage behind the third row, which folds flat in a 50/50 split opening 43.4 cubic feet of cargo space. The second row also folds flat (in a 60/40 split), leaving a 90.9-cubic-foot cargo hold with a reasonably flat load floor all the way to the back of the front seats. There’s a recessed cubby hole in the left side of the rear cargo wall, and a covered underfloor storage space for concealed storage of a briefcase or camera bag, or anything else you want to keep out of sight.

Up front, there’s a big glove box in front of the passenger and a drop-down sunglass pocket overhead. A flexible center console has two big cupholders and a sliding armrest that opens for access to a bin with USB, power, and auxiliary jacks, as well as enough depth to hold a tablet, small laptop, or medium-sized purse. All four door panels have water-bottle pockets and additional open storage. Second-row passengers get a pair of cupholders on the back of the center console, as well as front-seat back pouches, while third-row passengers get an outboard armrest with a storage bin and cup holder.

If you need minivan functionality, but simply cannot bear to be seen behind the wheel of a vehicle with sliding side doors, the MDX is a good, stylish stand-in. 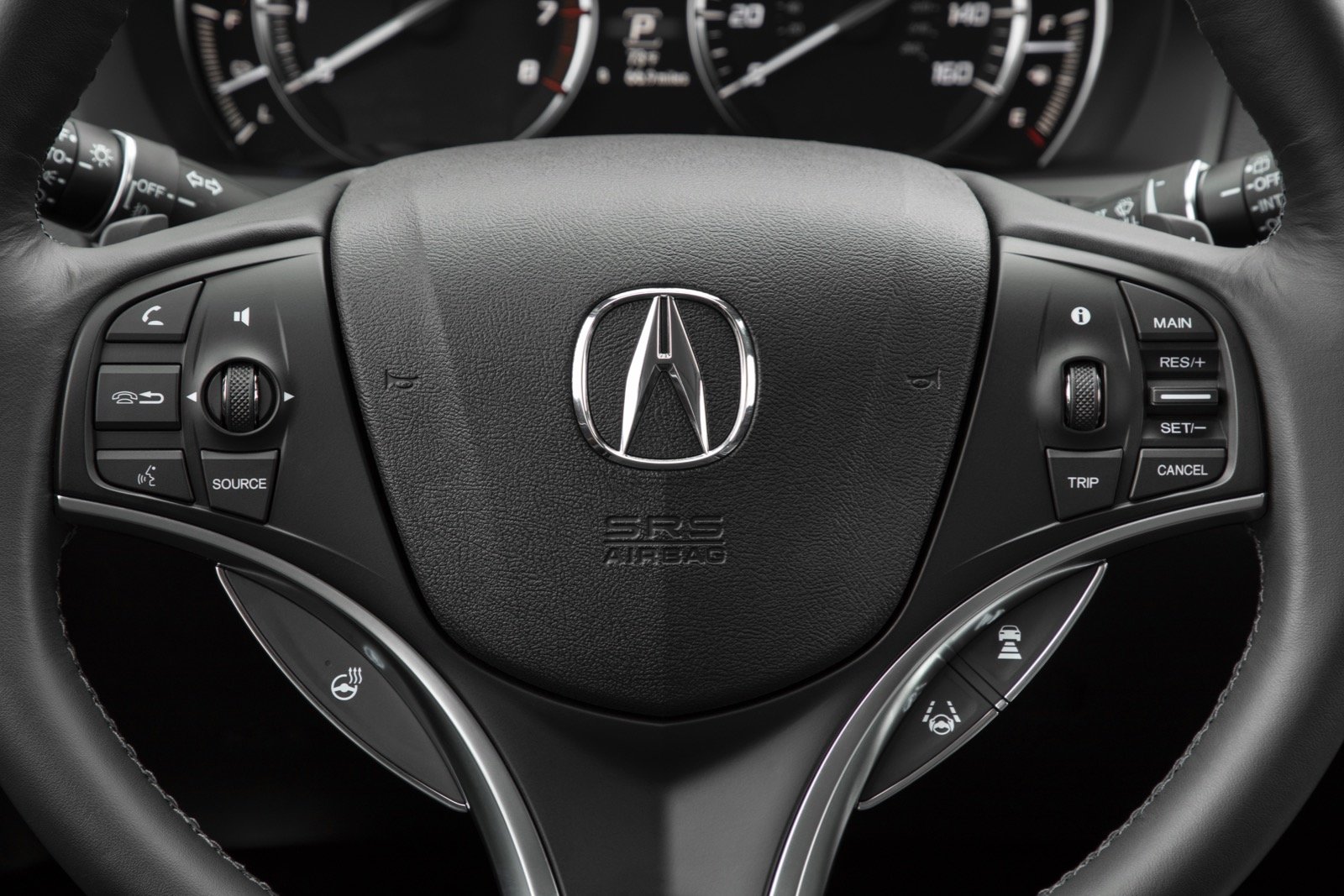 Rather than provide a long list of a la carte build options, Acura has simplified its trim levels into packages—and most of the packages are full of technology features. The base MDX is nicely equipped, tech-wise. It comes with standard Siri Eyes Free, Apple CarPlay, Android Auto, hands-free Bluetooth, SMS/MMS text message and email capability, a CD/MP3 and WMA-compatible compact disc player (old school), five USB ports, SiriusXM satellite radio, and an eight-speaker audio system, but lacks the special tech extras that really define the cutting edge today.

For $2,000, you can add the Entertainment Package to either the Technology Package or Advance Package, and then you get a DVD rear entertainment system with a 110-volt power outlet in the front center console and two pairs of wireless headphones. The Advance Package uses a 16.2-inch Ultra-Wide Full VGA screen and has HDMI compatibility and two additional speakers, while Technology Package comes with a 9.0-inch Full VGA screen and one additional speaker. 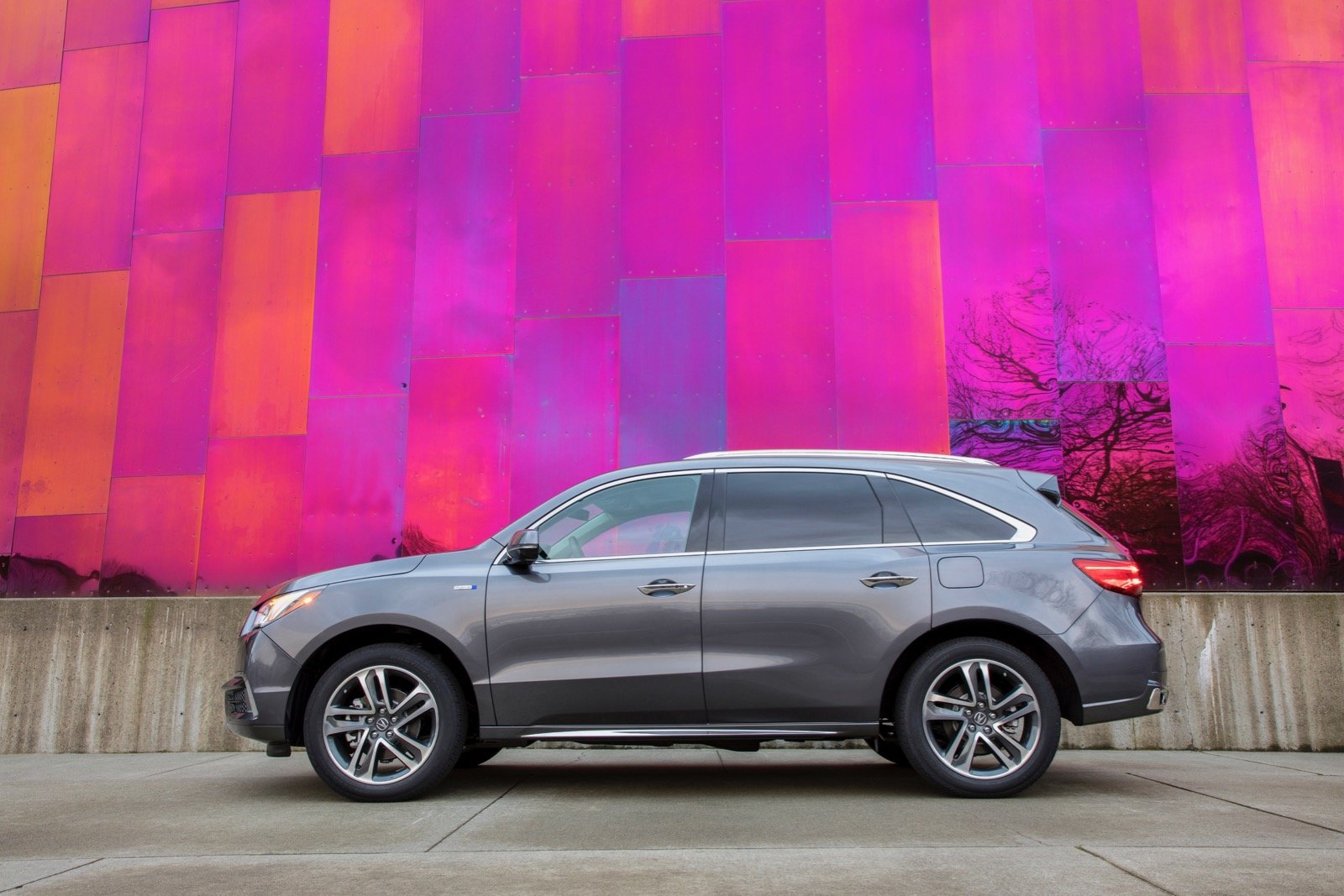 Acura has developed and implemented a sophisticated body design they call “Next-Generation Advanced Compatibility Engineering (ACE) Body Structure," which is designed to absorb the impact in a crash, transferring energy through the MDX’s frame and away from occupants. 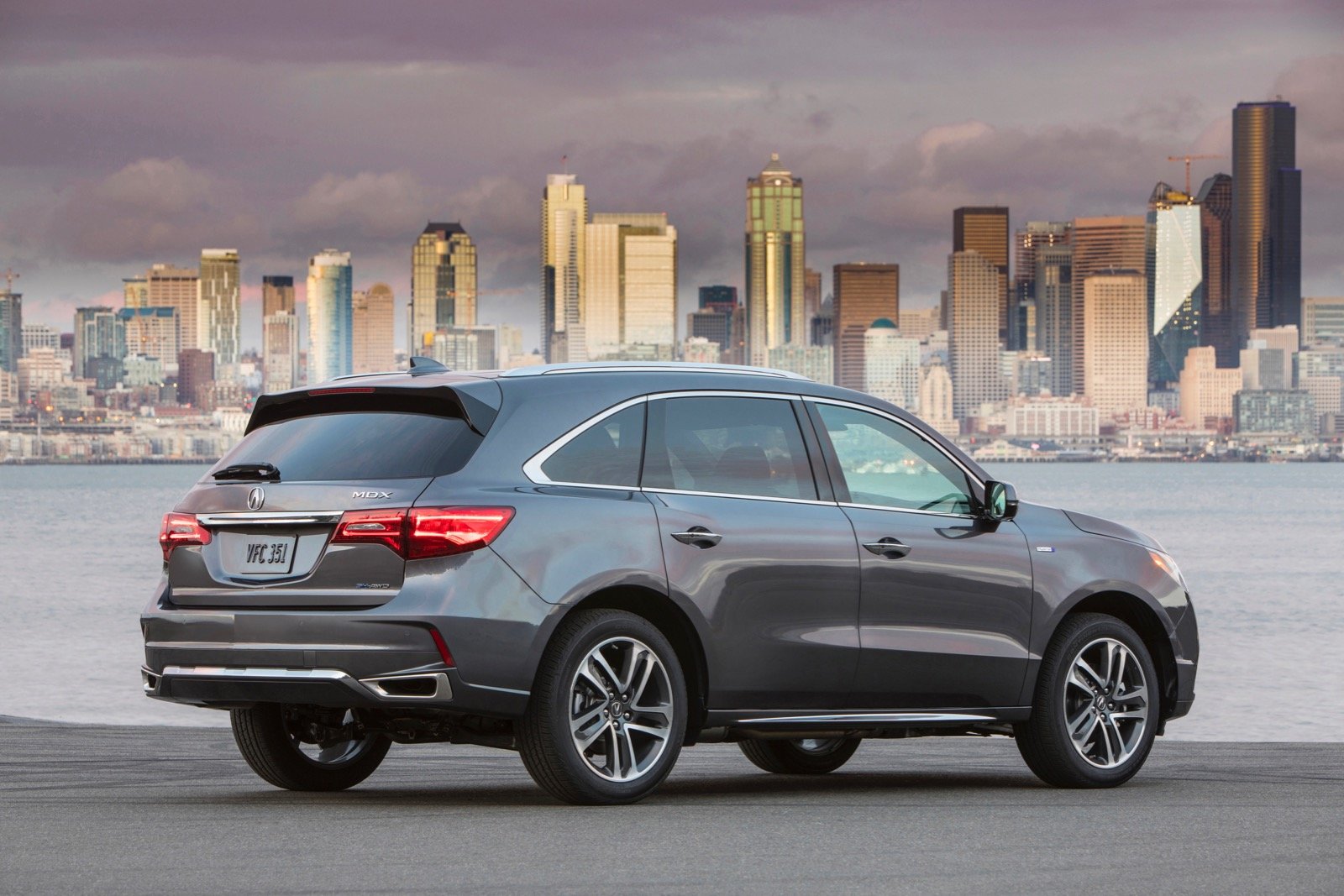 The 2020 Acura MDX starts at $44,500, and the MSRP goes up quickly from there. Add the Technology Package, and the starting price goes to $49,500. Pile on the Advance Package, and you’re looking at $56,250. Add another $2,000 to each of those numbers if you want Super-Handling All-Wheel Drive (and you do), and another $2,000 for the Entertainment Package (only available with SH-AWD). If you want the hybrid powertrain, there’s no base model. Prices start at $53,000 for the MDX Sport Hybrid SH-AWD with Technology Package and $59,750 for Sport Hybrid SH-AWD with Advance Package.

Have you driven a 2020 Acura MDX?
Rank This Car

Is It Better To Get The Last Model Year ?

Is it better to get the last model year before a major upgrade, or watt for the new model? keep in mind the discount price, years of improvement of the current model year and the increase in price ...

41 views with 3 answers (last answer about a year ago)

What If I Want To Lease A Pre Owned Vehicle

SH-AWD with Technology Plus Package