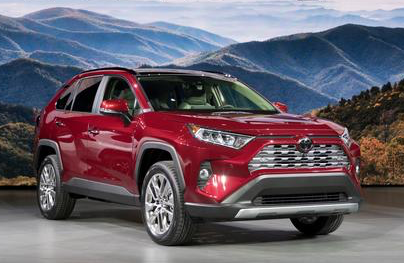 The Toyota Prius has become a household name over its 20-year lifespan, the Camry Hybrid arrived back in 2007, and Ford was first with a hybrid crossover in 2009. So, the RAV4 Hybrid was beyond overdue when it launched for 2016. The newest 2019 RAV4 Hybrid isn't the Corolla-looking lump that it resembled a year before. It now looks tougher, more rugged. Also, the hybrid version is the sportiest and most cost-effective way to rock a RAV4—seriously, it's so good and priced so right, you can ignore the standard model. 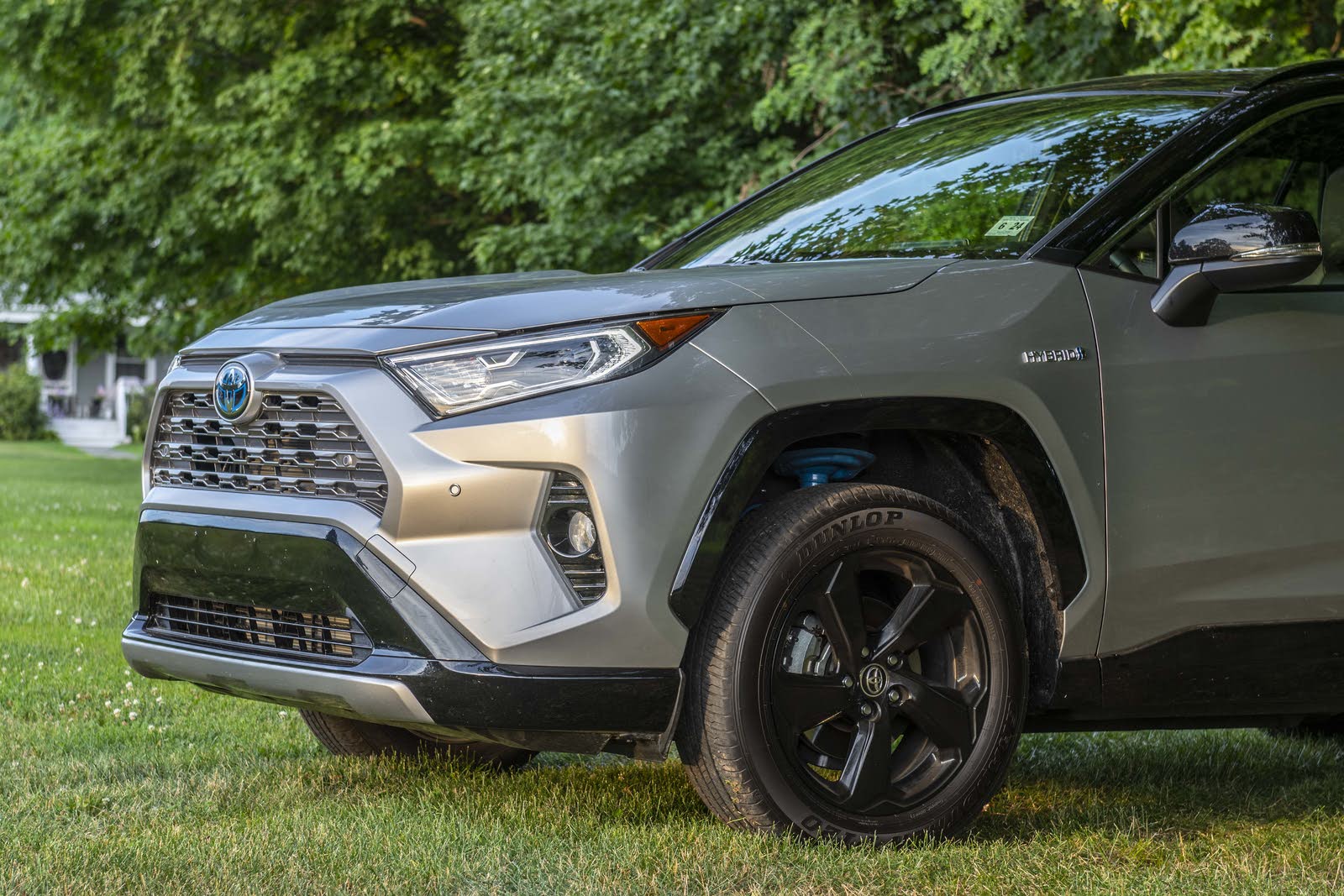 I stopped noticing the RAV4 when Toyota removed the external spare tire and the side-hinged tailgate. Those were vestiges of traditional truck style that suggested adventure. The body, from the first model in 1996 until the third generation ended in 2015, was upright and mostly square, like a baby Land Cruiser. Then the 2016 model arrived, looking soft and contoured. It had all the excitement of a throw pillow with no semblance of a Recreational Activity Vehicle.

But the new RAV4 nails it. Gas or gas-electric, the RAV4's design echoes Toyota's classic trucks. The front is 4Runner, a big flat slab of trapezoids and flexing surfaces where the fog lights, grille, headlights, and lower chin spoiler fit into different planes. The hood has a milder angle instead of the extreme cab-forward look of the last RAV4.

The fenders and wheel wells have hard creases like the head of a bolt. The side glass reclaims the original RAV4's large greenhouse. Toyota paid attention to the tail, with distinct sections for the raked glass that let the chiseled taillights extend past the rear quarter panels, and a handsome section of lower black trim rising from the fenders that visually lowers the body. On my test car's XSE trim—a sport version exclusive to the Hybrid—all that black trim was glossy instead of matte, including on the roof, A-pillars, mirrors, fender flares, and 18-inch wheels. If this is how hybrids look in 2019, sign me up.

Same goes for the interior. Oversize knobs with rubber padding and large buttons look like they've been taken straight off the Tundra, though the cabin quality is several grades higher. Padded dash and door trim with blue stitching, thin bands of silver trim around the center stack and slim air vents, a thick PRNDL gear selector, tall door handles, a soft steering wheel, and snug front seats with blue-striped cloth inserts and shoulder bolsters made even my all-black interior look (and feel) upscale. The RAV4 isn't meant to be a hardcore truck, but it sure looks the part from every angle. 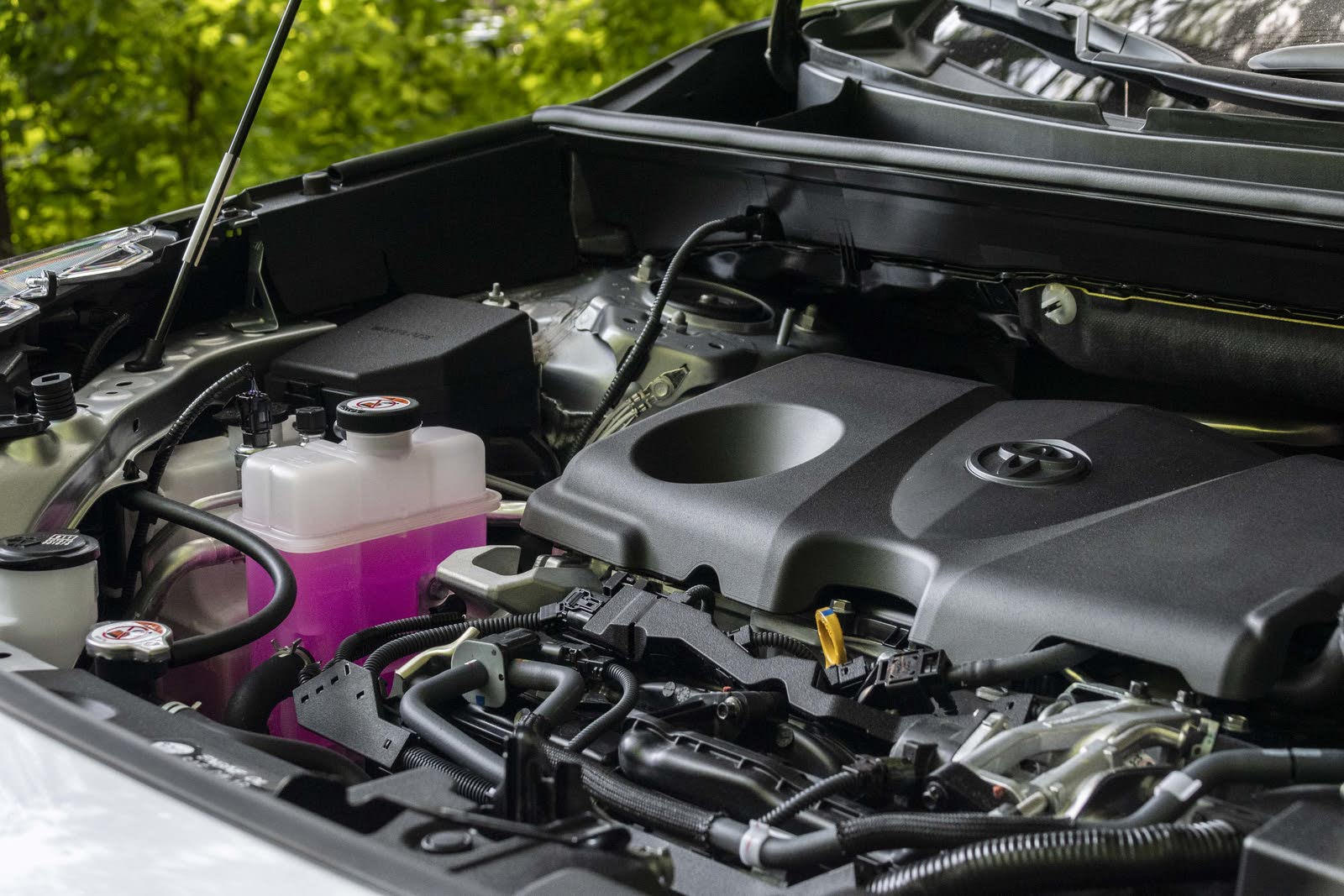 It may seem counterintuitive that an eco-minded hybrid model accelerates faster and handles better than its gasoline counterpart, but that's exactly how the RAV4 Hybrid behaves. While the 2.5-liter 4-cylinder engine is detuned to run on the lazier Atkinson cycle, it combines with the two electric motors at either axle and a 1.6-kilowatt battery to produce 219 horsepower and a surge of torque missing from the regular model (its torque maximum remains unrated due to the variable operation of hybrid systems). What's interesting is that, instead of using lithium-ion batteries, which it has implemented on the latest Prius, Toyota decided to stick with the older nickel-metal hydride chemistry. These batteries keep a more consistent state of charge, especially in cold weather, despite being heavier and larger. They're also cheaper and have proven to be reliable after 20-plus years and several million Toyota hybrids sold.

Like any Toyota hybrid, the RAV4 drives so effortlessly around town that you'll never notice when the engine is on or off. It's quiet and seamless. Even on the highway, where the engine shuts off while coasting, you'd really have to study the car's live graphic display to figure out how the hybrid system is routing power and recapturing energy for the battery. It's not a fast car by any means, but the continuously variable transmission (CVT) doesn't strain the engine at high revs much when you peg the throttle. However, the standard all-wheel drive (AWD) is sometimes slow to counter wheelspin. Braking is the RAV4 Hybrid's sore spot, or rather its squishy spot. That's how the pedal feels at any speed. It's not reassuring, and it's annoying that in 2019, Toyota still hasn't bothered to mimic the feel of a traditional braking system like Honda has with its hybrids.

What saves the RAV4 Hybrid is its stable, flat-footed handling and connected steering, both of which surprised me on my test route and during a road trip from southern Connecticut to Amherst, Massachusetts. The XSE version brings sport-tuned dampers and springs that actually do what they advertise without compromising ride quality. It's a noticeable difference from the regular RAV4. The steering tracks faithfully straight and responds quickly for a family crossover—another thing you won't find on a Nissan Rogue, a Chevy Blazer, or most competitors. It was alarming but in a very good way. Several driving modes are available, including Sport, which tightens up the steering feel a little more. A Trail mode assists on slippery surfaces.

Then, of course, there's the fuel efficiency. I averaged 36 mpg over 400 mostly highway miles, half of which included luggage and two more adults on board. The EPA rates the RAV4 Hybrid at 41 mpg city, 38 highway, and 40 combined (the previous RAV4 Hybrid could do only 34/31/33). In a high-riding vehicle that isn't at all styled like the egg-shaped Prius, that's exceptional. 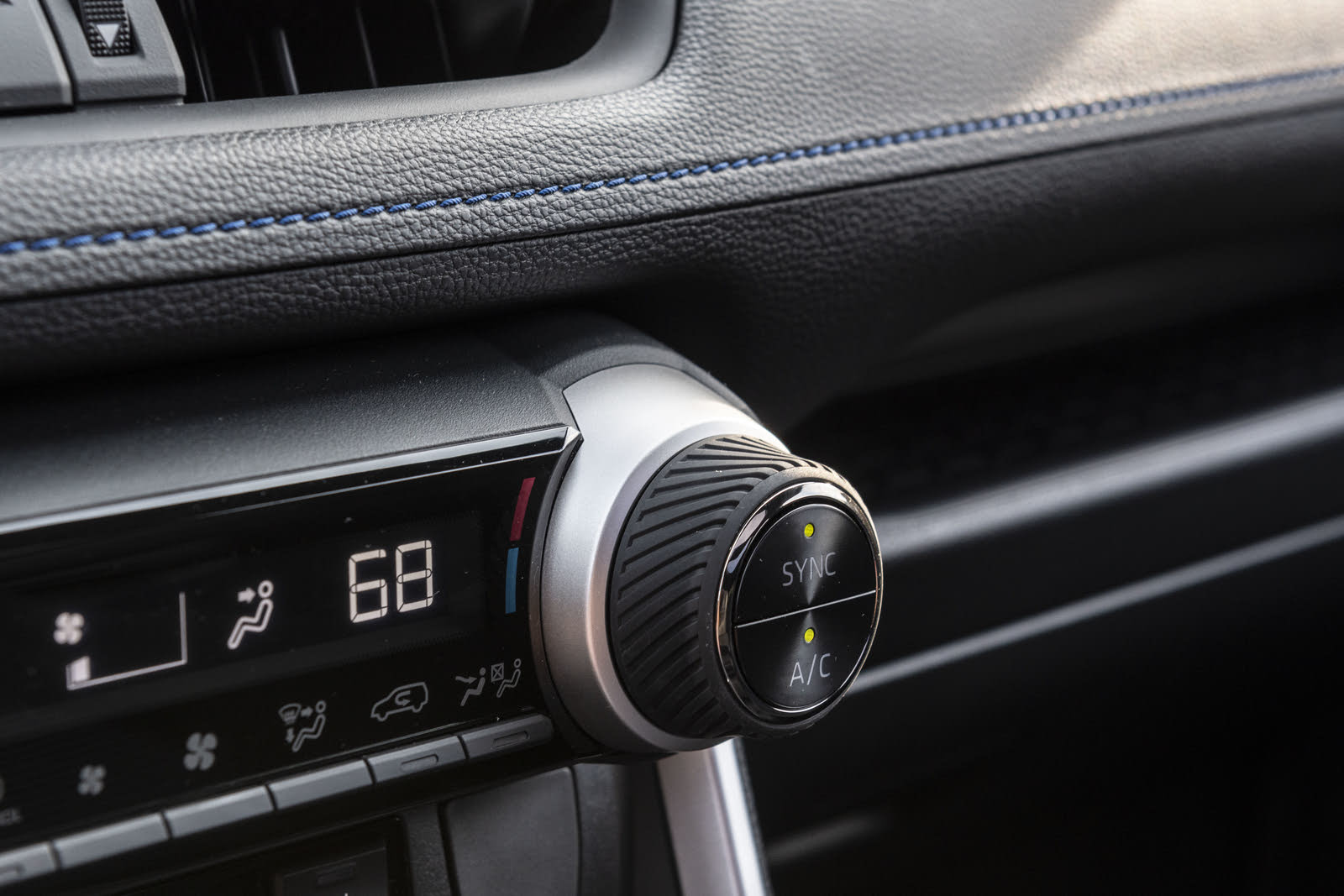 Sightlines are also good in all directions, and there's no sacrificing cargo or space with the hybrid, either. Cargo volume is 37.5 cubic feet behind the rear seats—huge—and 70 with the rear seats folded. Plus, there's a spare tire underneath the cargo floor. Legroom is very generous in the second row, which manually reclines, and on a 95-degree day, the air conditioning chilled the cabin in no time. Some vehicles like the Volkswagen Tiguan have horrible AC that takes 20 minutes or more to feel somewhat cool.

The big knobs and switches do wonders for ergonomics, although controls for the windows, locks, and mirrors aren't illuminated at night. That's my only criticism. Otherwise, the shortcut buttons surrounding the infotainment screen, separate climate controls, steering-wheel controls, and a large digital speedometer that doubles as an info display for navigation, audio, and other functions are all very easy to use and read. 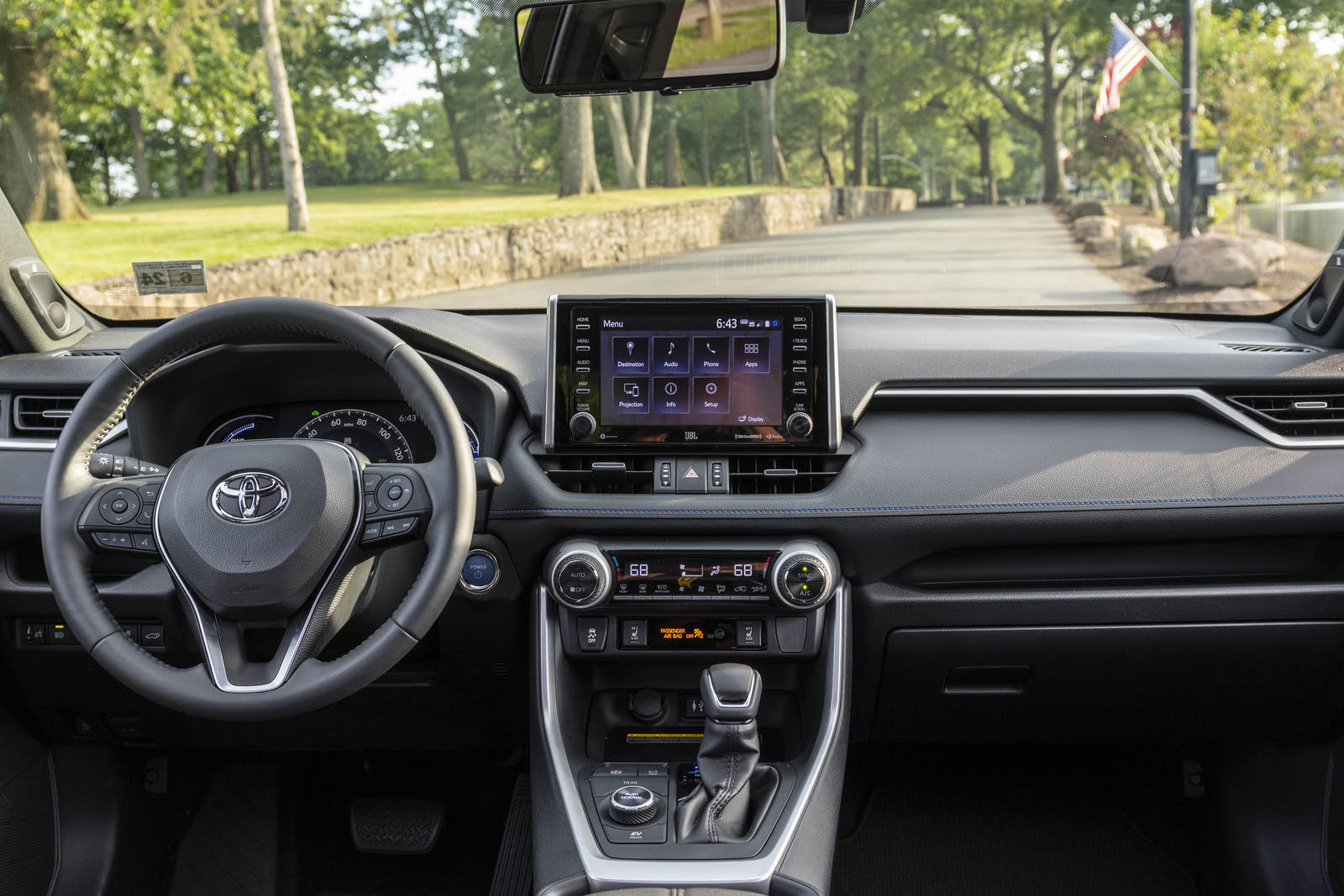 The infotainment interface is better than what you'll find in Lexus models, which don't use a touchscreen and rely on a wonky trackpad located on the center console. Toyota makes it simple. Menus are clear and organized, the screen accepts swiping and pinching gestures, and the home screen can be customized with shortcuts you choose. However, the maps look dated and featureless compared to newer systems. Toyota's Entune 3.0 includes apps like NPR, but only if you plug in a smartphone with those apps and the Entune app installed. Nothing is installed on the car, and what Toyota offers isn't worth the effort. Apple CarPlay is standard, but oddly, Android Auto is not. The JBL stereo is only adequate.

Our test car's lane-keep assist reacts too late and isn't designed for semi-automated operation in traffic. On the plus side, Toyota offers standard stolen-vehicle alerts, automatic crash notifications, and SOS assistance for three years as part of Safety Connect. When specified with WiFi and Remote Connect, which allows for remote unlocking via a phone, Toyota throws in only a 6-month trial. While lacking in some areas, the best technology on the RAV4 Hybrid is what you don't notice—the hybrid system. 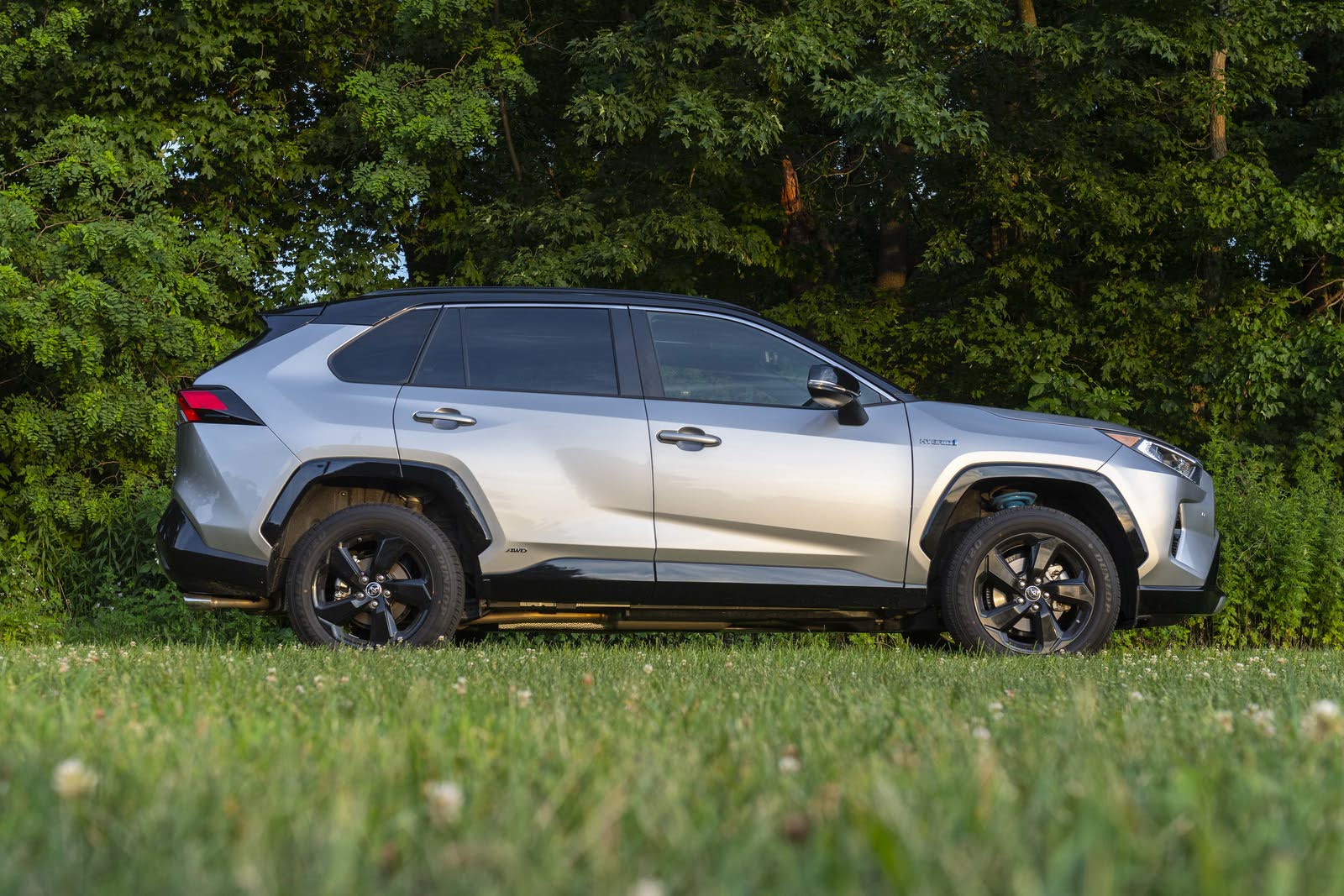 The 2019 RAV4 Hybrid is rated 4 out of 5 stars for the driver's-side frontal crash test and 4 out of 5 stars for rollover resistance by the National Highway Traffic Safety Administration (NHTSA). It scored the maximum 5 stars for the front passenger in the frontal crash test and for front and rear passengers in the side barrier and side pole tests. Overall, the car earned a 5-star rating. The Insurance Institute for Highway Safety (IIHS) rated the 2019 RAV4 (not the Hybrid) its top Good rating in all six crash tests and the top Superior rating for its collision-avoidance system. Low scores for the headlights prevented the RAV4 from being awarded a Top Safety Pick. Toyota Safety Sense comes standard, which includes forward emergency braking, pedestrian detection, lane-keep assist, blind-spot monitoring, adaptive cruise, traffic-sign recognition, and auto high beams. Of particular attention is an airbag mounted in the front passenger seat's cushion that is supposed to prevent forward movement in a crash. No other car I know has such an airbag. A driver's knee airbag is also standard. Rear emergency braking, such as when a car passes by in a parking lot when reversing, is optional. 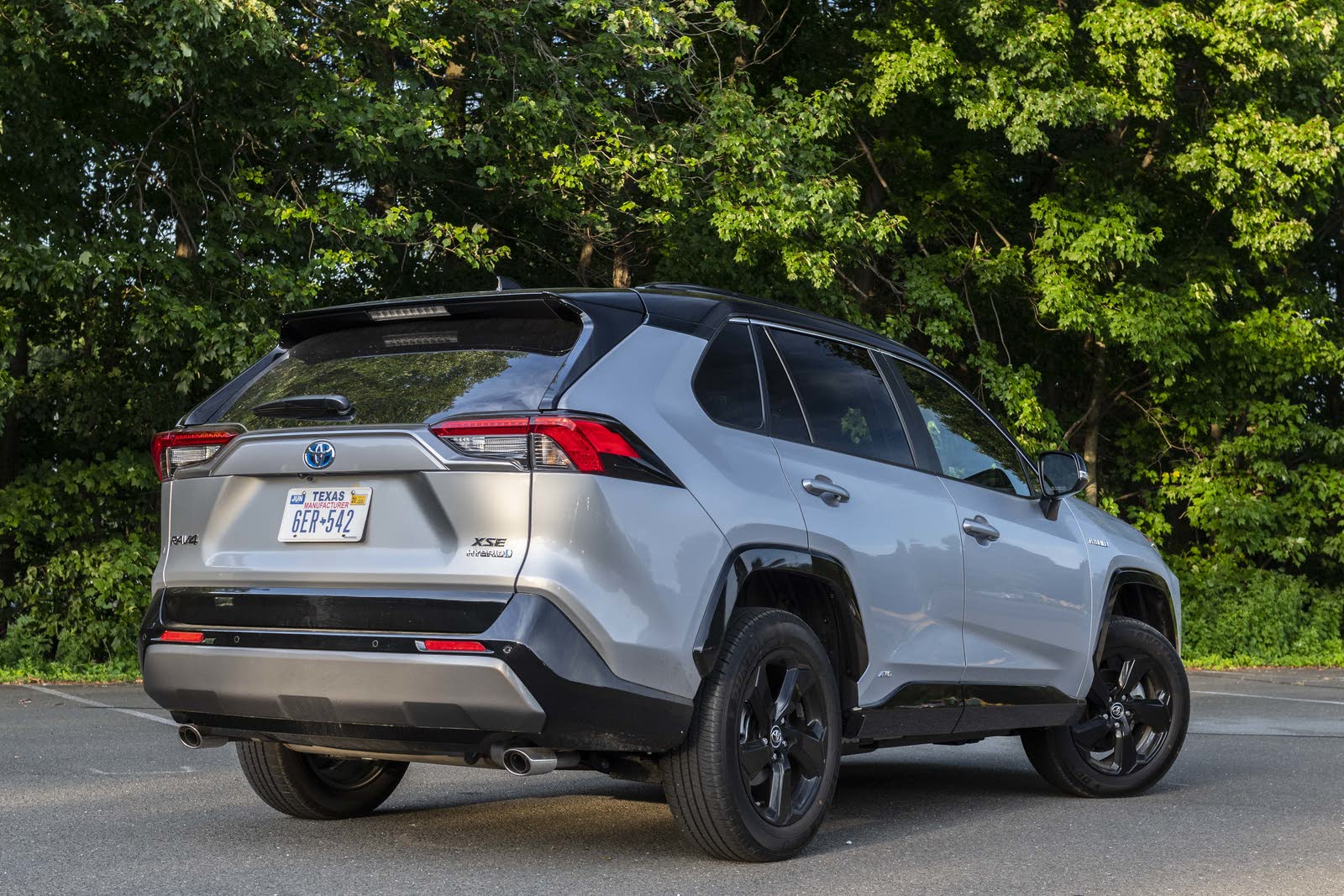 The 2019 RAV4 Hybrid comes in four trims (LE, XLE, XSE, and Limited), with starting prices ranging from $27,850 to $35,850. Those prices are within $2,000 or less of similar gas-only trims. On the XLE and XSE, the prices are even. My XSE test car was fully optioned at $37,780, including a $1,095 destination fee. That includes a panoramic moonroof, navigation, upgraded stereo, the XSE Cold Weather package (including a heated steering wheel), and the Technology package, which includes rear cross-traffic braking and a wireless phone charger. CarGurus recommends the XSE because of how cool it looks and how well it drives versus the other RAV4 Hybrid trims—but only with the XSE Cold Weather package—for a grand total of $35,320. Toyota includes the first two service visits (within two years or 25,000 miles) and roadside assistance (within two years or unlimited miles) as part of ToyotaCare. Considering its class-leading fuel efficiency, impressive driving dynamics, a proper truck exterior, and a roomy, high-quality interior, the RAV4 Hybrid is an easy recommendation among compact crossovers.

johnnymars What are the mile per gallon figures?

Dave I hate sunroofs - they raise the center of gravity while reducing head room (with which Toyota's are notoriously stingy) not to mention they are not as strong as a metal roof and add weight. Will Toyota make a 2019 Rav4 hybrid in a decent trim level (limited or XSE) without a sunroof?

MichaelRH AMEN!!! No sunroof! One more thing to go wrong.

GuruHB3QZ The EX model I was shown did not have a built in GPS system. A real plus as the GPS in my 2017 RAV4 hybrid is guacamole, with apologies to guacamole.

Donna I don't want a sunroof either!

Hugh459 No sunroof! Worthless expense. Instead, add a Prius plug-in for 30 electric miles for around town.

Guru61KGB I love the 2020 RAV4 Hybrid BUT I cannot tolerate the obnoxious sound it makes while in reverse. I will probably try to return it or trade. When backing out the underground parking at my condo it is an irritant to my neighbors!

Have you driven a 2019 Toyota RAV4 Hybrid?
Rank This Car

Rav4 Hybrid Noise When In Reverse

I was told that the noise while in reverse is to warn pedestrians you are backing out of a space. The noise is very annoying and embarrassing. If someone disconnects the sound are they taking a ri...

how can I change Korean language to English for RAV4 2019? there is no language appear in MENUE

My 2019 Rav4 Hybrid brakes squeal very loudly for low speed slowing and stopping. It is extremely loud, with people I'm on phone with asking what's that noise. Dealer says it's normal that brakes ...

I bought a Rav 4 hybrid 2019. And the fuel gauge doesn’t show full when I put gas in the suv. I’ve taken it to the dealer and they told me that Toyota is investigating this problem. I have paid a lo...