Nissan's premier sedan continues into the next decade with considerable power and style. 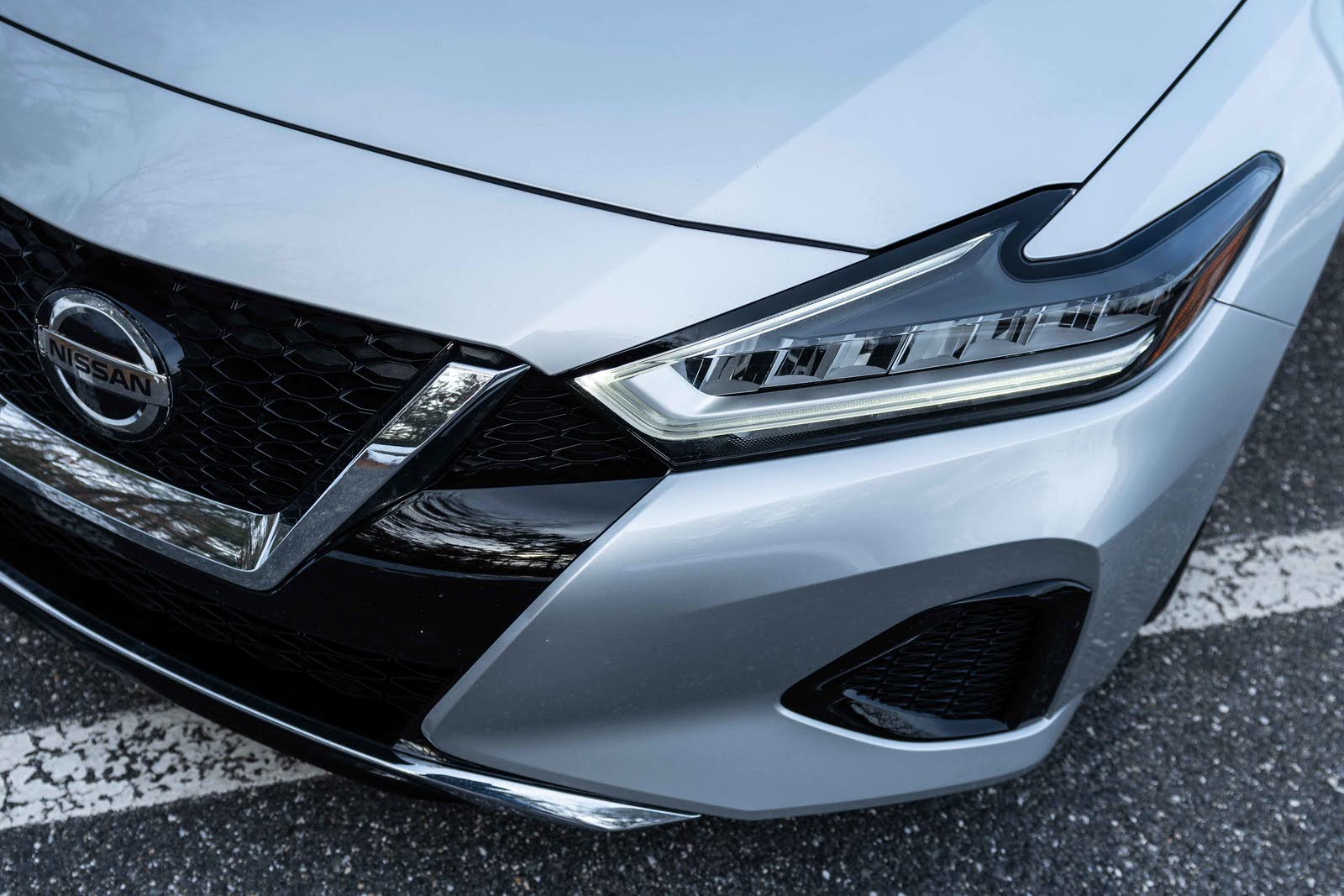 The Maxima has endured for eight generations as a premium midsize Nissan sedan. While not the “four-door sports car” that Nissan proclaims, the Maxima’s powerful V6 engines and crisp handling have earned it a solid reputation over the past three decades. We last tested the Maxima when this generation was brand-new for 2016. Now that Nissan has refreshed it ever so mildly for 2019, we’ve taken another look at its updated style, technology, and interior features. 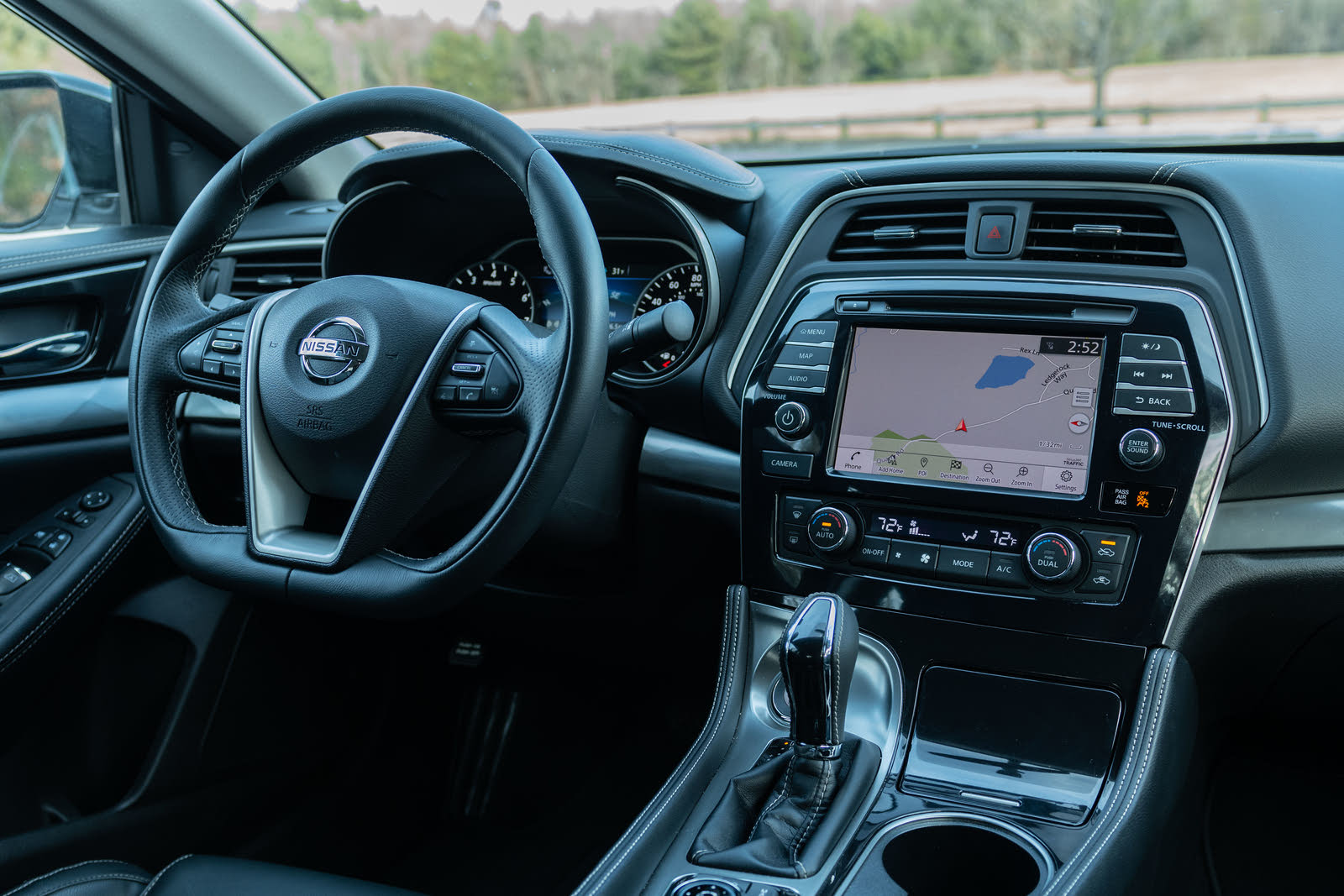 Nissan’s V-shaped designs don’t appear as extreme as they did a few years ago. If anything, they’re more refined and acceptable today, despite Nissan doing almost nothing to change this once-radical design. For 2019, Nissan swapped the projector-beam LED headlights for an intricate pattern of reflectors and gave the grille an edgier treatment. There’s a new silver bumper strip beneath enlarged fog-lamp enclosures. The LED taillights are tinted black and feature similar reflector patterns for the turn signals. They sit above a revised bumper and quad tailpipes. But the Maxima’s concave front fascia, wavy creases along the side, and revolutionary “floating roof” that blacks out all the pillars remain unchanged. It’s a stylish car even without the sportiest SR trim’s decklid spoiler and black 20-inch rims. Speaking of wheels, Nissan made five brand-new designs and brought Sunset Drift (the ripened orange color we tested on the 2018 Rogue) to the paint options.

Inside, all Maxima models receive upgraded, softer materials. I tested the SV, which is the second rung up a six-trim ladder, and was very pleased by the contrast stitching on the dash, the tight panel gaps, polished black console trim, and minimal use of hard, cheap plastic that covers most other Nissan models. This wasn’t the top-of-the-line Platinum Reserve, which gains semi-aniline (as in, baby-skin soft) saddle-colored leather with diamond quilting and bronze-colored trim. Regardless, my Maxima’s all-black interior showed off its quality with lots of padding and upscale textures. You pay significantly more for a Maxima than an Altima, and it’s nice to be rewarded every time you sit down. 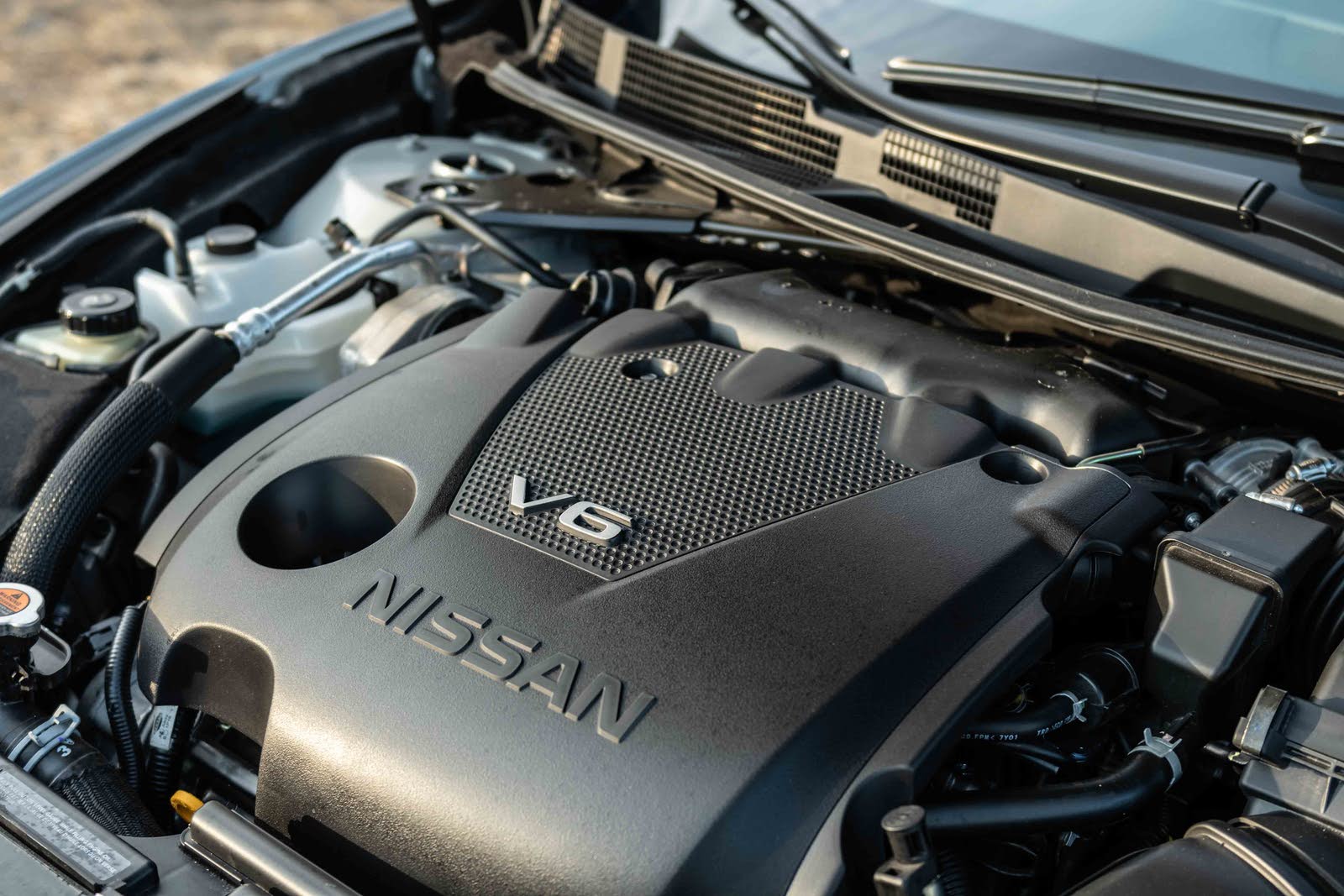 A single powertrain handles everything from quiet cruising to Oh-my-God-I-want-to-pass-that-truck-right-now. A 3.5-liter V6—no turbos, just a big old six—produces 300 horsepower and 261 pound-feet of torque. It’s mated to a continuously variable transmission (CVT), sending all the grunt to the front wheels. Normally this would be a disaster, as powerful front-wheel-drive (FWD) cars will literally steer you off the road under heavy acceleration. But the Maxima mitigates this "torque steer" to a non-event. The traction control is well sorted so the tires never light up, nor does the engine noticeably cut power. The thrust is immediate and smooth, without the annoying, gnashing sound of an engine strained at high revs like in the 4-cylinder Infiniti QX50. The Maxima’s CVT better simulates the up-and-down sensation of gear ratios—and let’s face it, the Maxima’s older V6 is the superior engine, in both strength and sound. There’s no getting around a good V6.

Unfortunately, it’s the mushy, soft brake pedal and numb, over-boosted steering that detract from maximum driving pleasure. Switching to Sport mode added more weight but little in the way of actual road feel through my hands. That’s a sore spot in a sedan that has its suspension tuned to a near-perfect combination of compliant ride quality and nimble response. At a gentle cruise, the laminated windshield and front windows drowned out exterior noise. The Maxima is still fun to drive despite the steering and brakes because the powertrain and suspension compensate for those deficiencies. It’s just not the true sporty sedan it could be. The SR has a firmer ride, along with electronic aids that can brake individual wheels around turns. But the Maxima could do more—and put its considerable power down even more effectively—if it had all-wheel drive (AWD).

Fuel economy is decent for a sedan this size, at an EPA-estimated 20 mpg city, 30 highway, and 24 combined, which I matched over 545 miles. 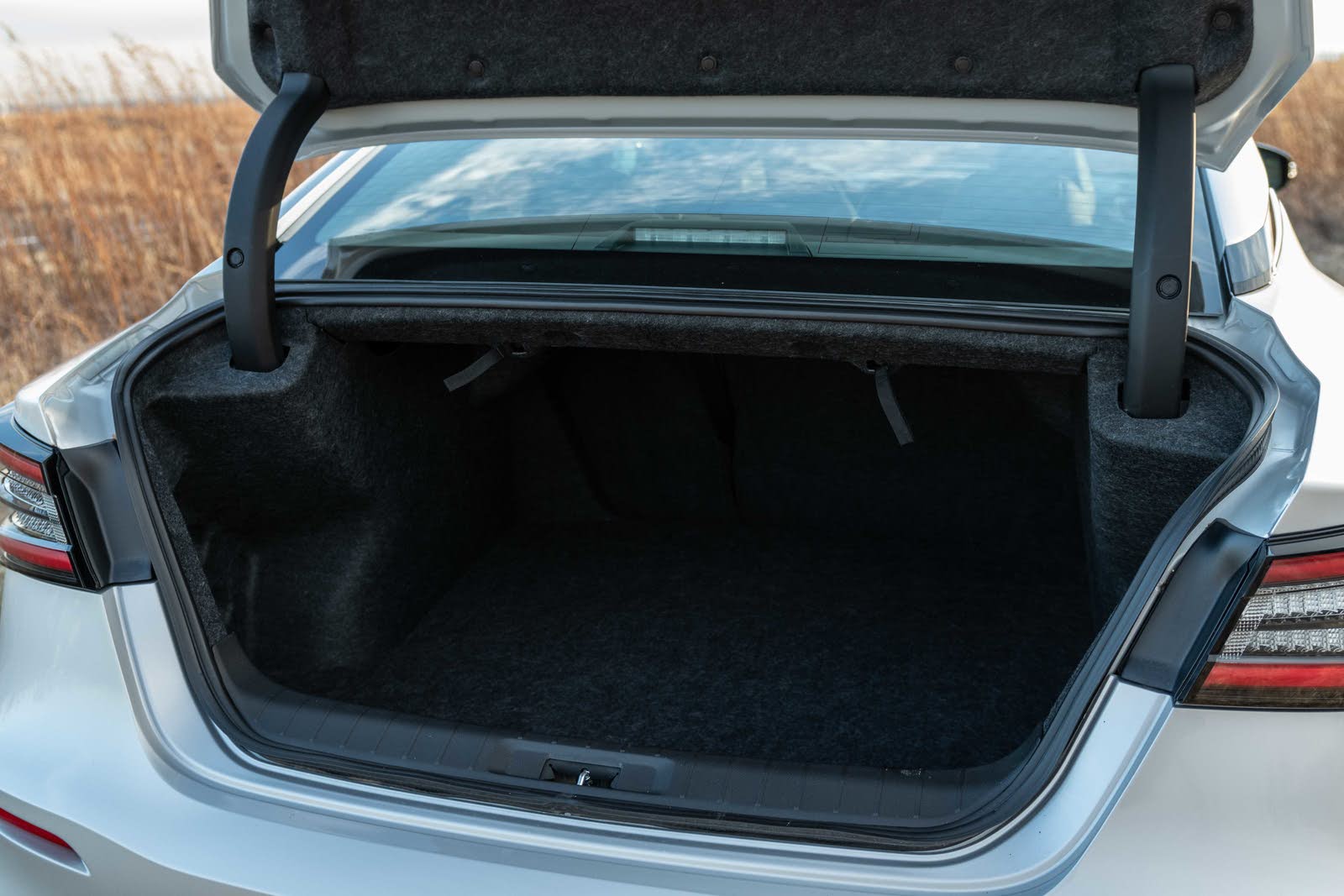 If you’ve spent time in the latest INFINITI models, the first thing you’ll notice about the Maxima is its single screen. INFINITI designers haven’t been able to decide what their customers want, so they’ve put two screens on the dash. One is worse and controlled by a rotary knob on the console, while the other is a slow—but higher-res—touchscreen. The screens are redundant across many vehicle functions, and each is a flat-out terrible way to manage critical tasks while driving. The Maxima has one simple 8-inch display neatly integrated into the dash, which operates by touch or knob. It’s your choice, and both ways are easy. Response times are quick, and shortcut buttons for the radio, nav, and other functions flank the sides of the touchscreen. Adjusting the stereo’s tone controls involves pressing the Tune knob and twisting to adjust bass and treble. Climate and heated-seat switches are laid at your fingertips. Remember how cars used to be before they complicated our entire lives? That's the Maxima.

The Maxima’s thick pillars and slim D-pillar (which both compromise sightlines) are a minor pet peeve. The trunk, at 14.3 cubic feet, is smaller than what you'll find in competing vehicles. But there’s enough passenger room in the front and rear. The front seats are especially comfortable for long cruises. Nissan says they developed these Zero Gravity seats over the course of a decade to “reduce muscle fatigue” by relieving pressure from 14 points across the body. The seating position, while not as satisfyingly low as the Honda Accord's, is nonetheless geared toward the driver with a flat-bottom steering wheel and canted center stack. 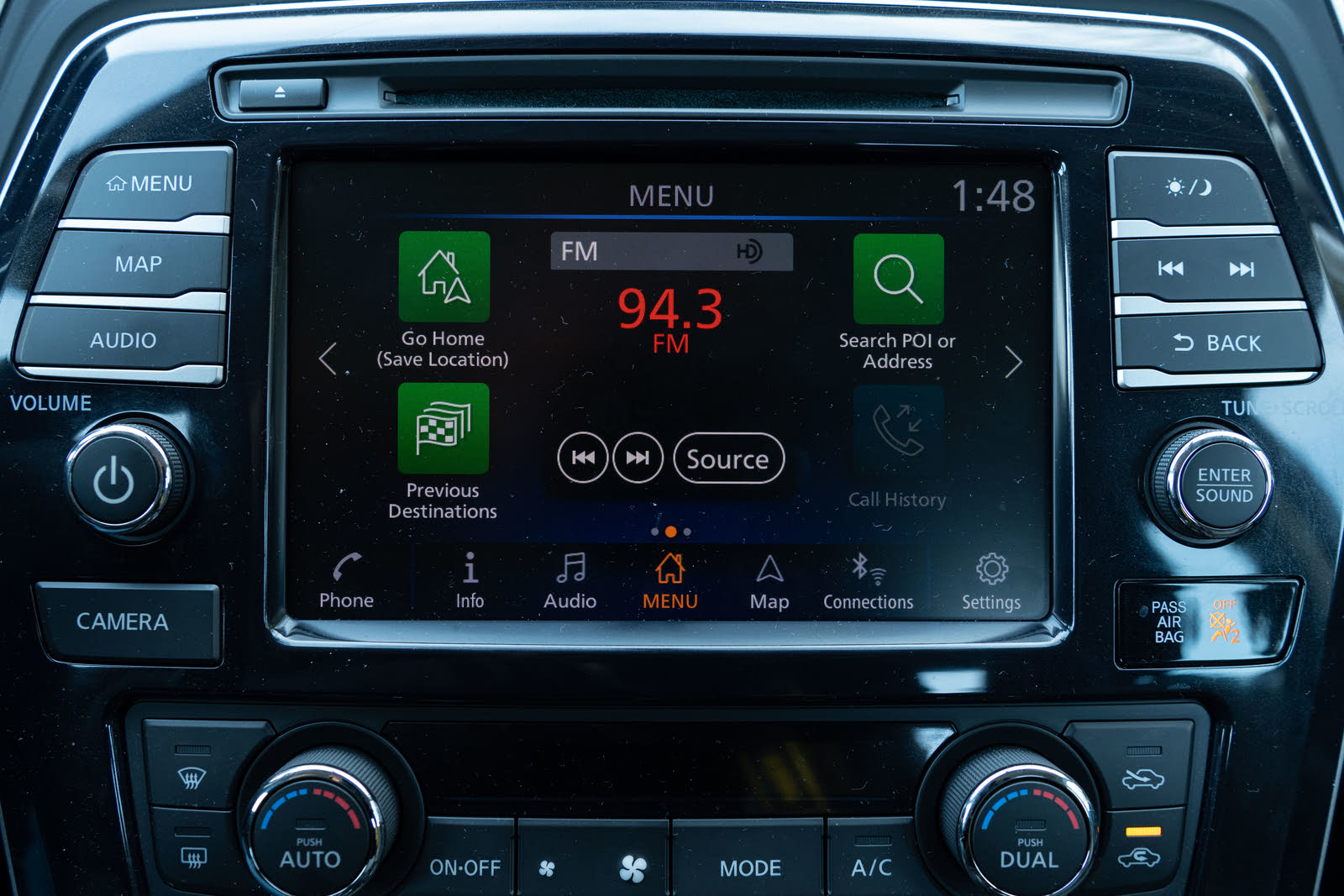 All 2019 Maxima trims receive an updated navigation system except the base S, which doesn’t come with nav. The map occasionally lags when pinching or swiping, but it’s dramatically more detailed and clearer than before, plus it can look up destinations online via voice commands or on-screen controls. The infotainment home screen can be customized to show your favorite features, while another tiled screen shows SiriusXM data such as traffic, weather, and sports scores. Apple CarPlay and Android Auto come standard. There’s a high-speed USB-C port up front—something most cars still don’t offer—for the latest devices. The Maxima is compatible with Amazon Alexa and Google Assistant, too, so if you're into talking to your car, you can tell it to start the engine, unlock the doors, or turn on the air conditioning. Additional remote services through NissanConnect offer automatic 911 dialing during a crash, stolen-vehicle tracking, and alerts for geofencing and speed should you hand your Maxima to a valet—or worse, a teenager. Remote start via the key fob is standard.

The instrument panel screen—wide and rich with color—can duplicate features on the dash. It’s also helpful in that it can display multiple readouts (the next turn, current audio track, speed) on one screen without one function taking over the other. My car’s Bose stereo, which featured active noise cancellation (and on SR trims, simulated engine noises to make the V6 sound louder), was adequate. Most disappointing? Unlike the Rogue and Altima, the 2019 Maxima doesn’t offer ProPilot Assist, Nissan’s suite of semi-automated driving functions that can steer the car through high-speed traffic. For a 2019 model, that's a glaring omission. 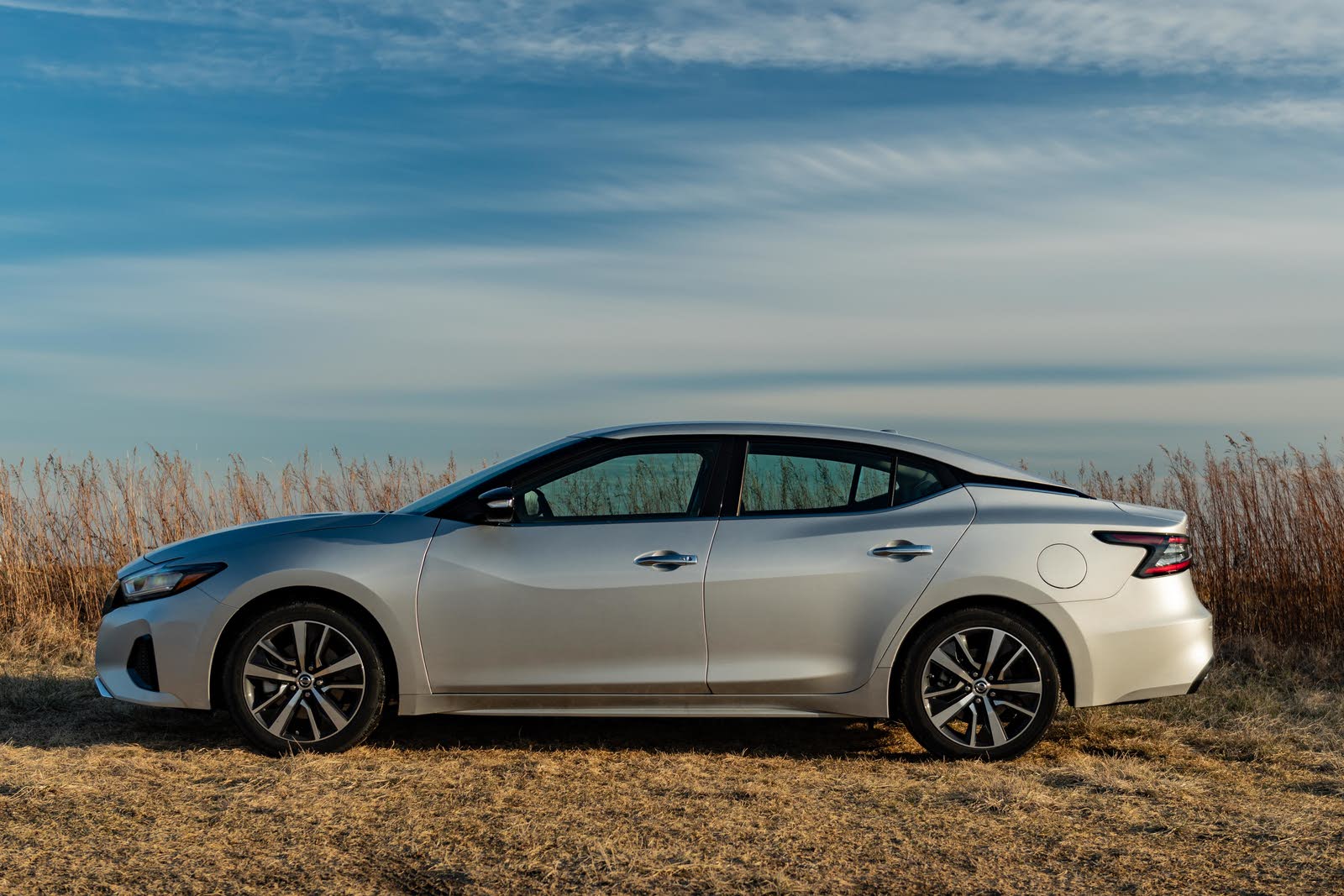 Both the National Highway Traffic Safety Administration (NHTSA) and the Insurance Institute for Highway Safety (IIHS) crash-tested the 2018 Maxima, which is mechanically and structurally identical to the 2019 model. The Maxima scored 5 stars overall from the NHTSA, with 4-star ratings for only the front-passenger side in a frontal crash and overall for the side-impact pole test. The Maxima is an IIHS Top Safety Pick, having scored the top Good rating in all six crash tests and a top Superior rating for its emergency braking system. 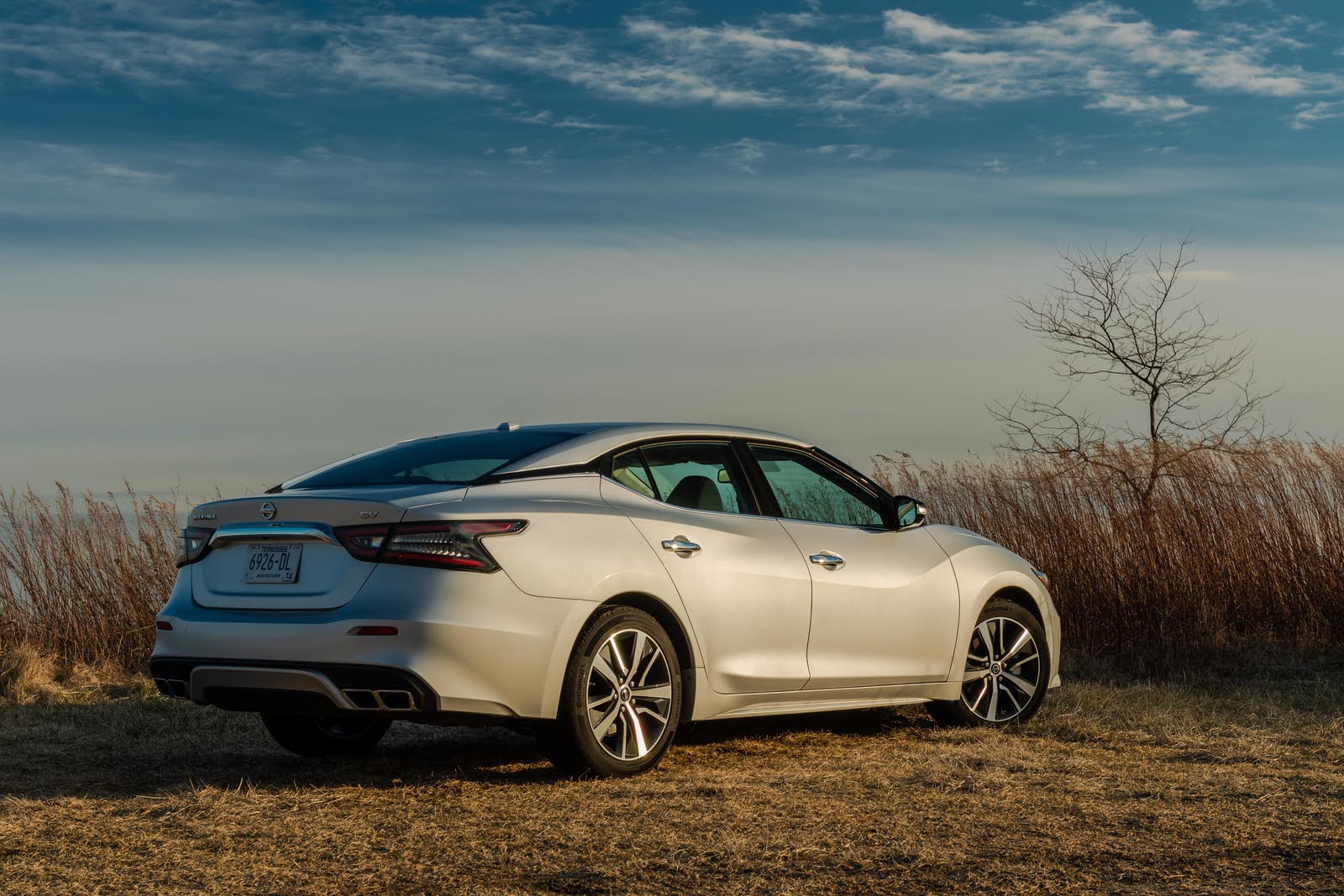 The 2019 Maxima starts at $33,950 and reaches up to $43,870 with extra paint on the Platinum Reserve. Most trims come one way without additional options or packages, such as my SV test car, which stickered for $37,215 with destination. The main concern, before the Maxima gets a complete redesign, is the all-new Altima that’s practically the same size and offers AWD and better fuel efficiency. Then there are the new Toyota Camry and Avalon, which in TRD trim offer the sporty looks and the suspension to ruffle the Maxima. A Kia Stinger is another solid choice, with a 365-hp twin-turbo V6 and sportier style. Manual-transmission enthusiasts can get their sport-sedan thrills with the Honda Accord. The point is, there are a lot of stylish, well-built, and fun-to-drive competitors. But the Maxima is all of those things, and despite few changes for 2019, it remains a good value and one of the few 6-cylinder sedans offered by a non-luxury manufacturer. Does it help that the Maxima’s interior is better than many INFINITI models costing thousands more? You bet it does.

Rmg939495 Love the car. Paint is great and a lot of extras on the inside. Handles and runs great and will go fast

Users ranked 2019 Nissan Maxima against other cars which they drove/owned. Each ranking was based on 9 categories. Here is the summary of top rankings.

Have you driven a 2019 Nissan Maxima?
Rank This Car

I live near Medford OR and found a new car in Little Rock, AR. The stock number is KC382870. Can I pay the $499 to have it shipped? I do not know how to download the picture(not a techie).

Does The 2019 Nissian Maxima Have The Option To Shut Off The Idle Stop And ...

Looking for a used 2019 Nissan Maxima SL on your site. Came across a HGREG.Com in Orlando FL. that had this car in stock at a fair price. Your customer rating however stopped me cold from even conta...