An army toolbox with untouchable off-road skills gets its first complete redesign in 40 years. 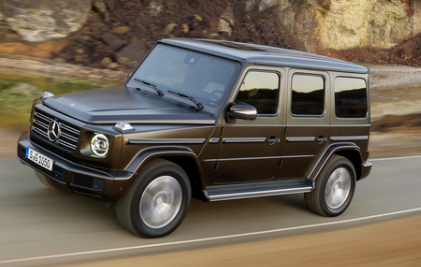 Military vehicles are not meant to massage their passengers into a heated slumber. They're made to transport soldiers and lay down suppressive fire. That the original 1979 Mercedes-Benz Geländewagen, intended for armies and the occasional farmer, has become a glitzy city runabout to valet at nightclubs is a phenomenon unlike anything else in the automotive world. It is one of the strangest status symbols imaginable—a miniature Brinks truck with an interior befitting a Bentley—and indeed the most unique Mercedes-Benz on sale. For 2019, the G-Class is both all-new and all-old. We had to test a civilian version to see if the G's battleground legacy means anything to buyers considering a Range Rover, Porsche Cayenne, or any number of $100,000 luxury cars. As it turns out, it doesn't. But the 2019 G-Class does a whole lot more than the 1979 original. 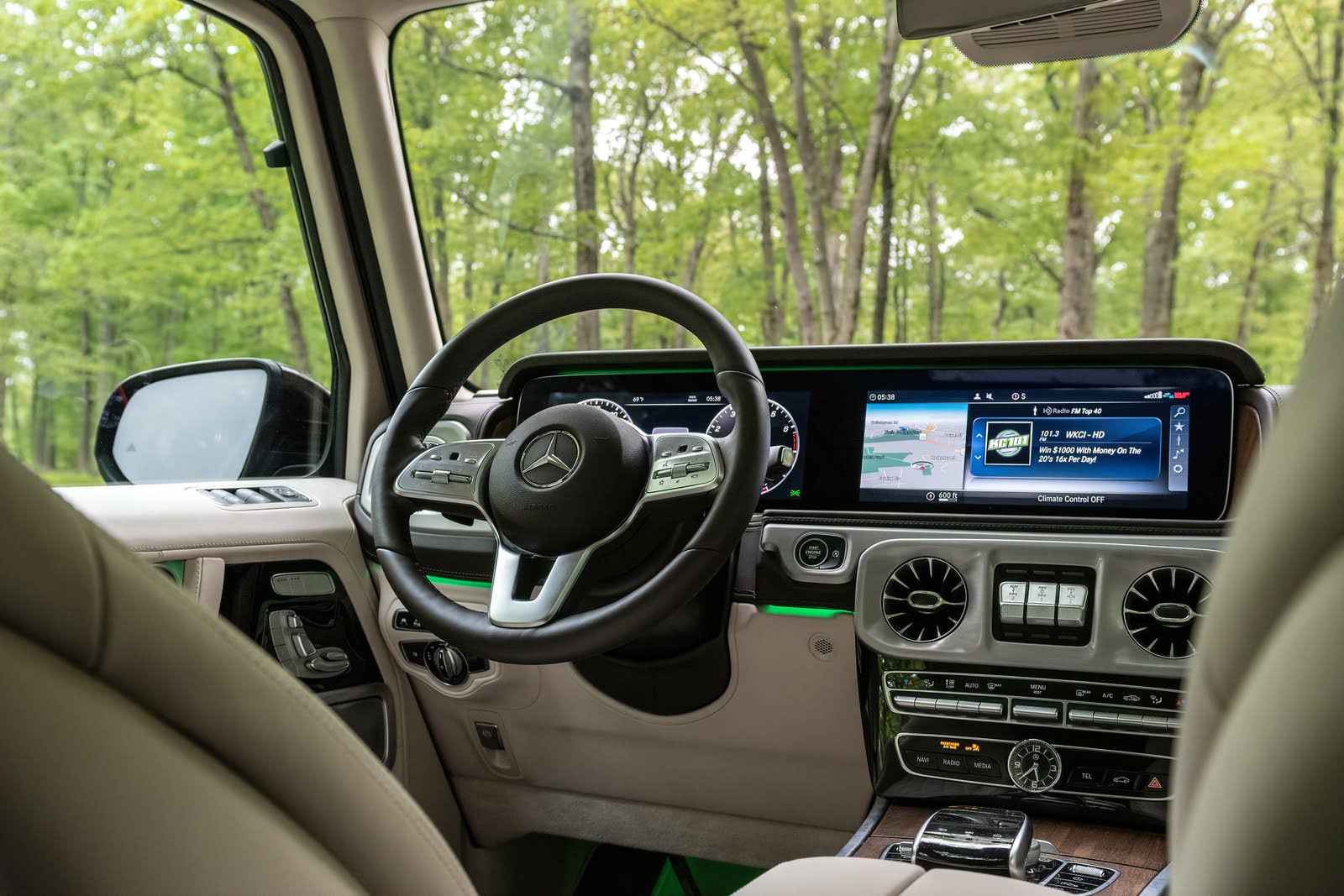 Consider the 2019 G-Class refined, not redesigned. Magna Steyr still builds the G-Class by hand for Mercedes-Benz in Austria, an evolution of the Steyr-Daimler-Puch factory that cranked them out during the Cold War. I visited the factory a few years ago before the plant retooled its line to accommodate this brand-new G, and no worker was in a rush. In fact, most everyone was out to lunch. This kind of low-volume manufacturing commands premium prices and enables an extreme level of engineering that no one aside from actual military commanders would need.

For plainclothes folk like me, Mercedes swaths the entire cabin in an ultra-soft leather draping the dash, doors, in between the doors, by your knees, on the back of the tailgate, the edges of each floor mat, and deep within the pillow-top headrests. When the factory runs out of cows, craftsmen place thick slabs of wood on the center console. Cool aluminum graces the center stack, tweeter speakers, and the door-lock pins. LED lighting animates, pulses, and fades. Gloss black displays 2 feet wide are set into a curved wooden dash. Colors, textures, and sounds—the doors clack-clack like a firing squad's rifle when locking—are both delicate and industrial. Look out the vertical windshield, and like a Jeep Wrangler, it's one of the very few modern vehicles that let the driver see the corners of each fender—and there are blocky turn signals stuck to each of them like you'd find on a semi truck. It's easily the most custom Mercedes you can buy: three dozen exterior colors, 14 types of leather, seven trim finishes, and four wheel styles. Mine, in Rubellite Red over Macchiato Beige and Espresso Brown, dripped with class. The G-Class is both an immaculate work of art and a masterful disguise for the beast underneath.

Outside, the door handles, headlight washers, and the painted, stainless steel spare-tire case are the only parts carried over from the last G-Class. Everything else, while copying from a strict template, is new. Mercedes had to round off certain surfaces to comply with pedestrian-impact regulations, such as the taillights and bumpers, and it tightened the panel gaps (especially around the headlight housings and doors) to imitate the quality of its other vehicles. But there's no ignoring the gaping space under the hood, the giant steel brush bar, the unusual cabin air vent on the D-pillars, the rectangular flat glass, the tiny windshield wipers, or the exposed hinges and rubber molding. This is a new vehicle designed from a 40-year-old template. To some, it looks hideous next to the exquisite sedans and seductive sports cars wearing the Mercedes star. To others, including myself, the G's very existence is its charm. No other vehicle assaults the eyes and pampers those inside it like this. 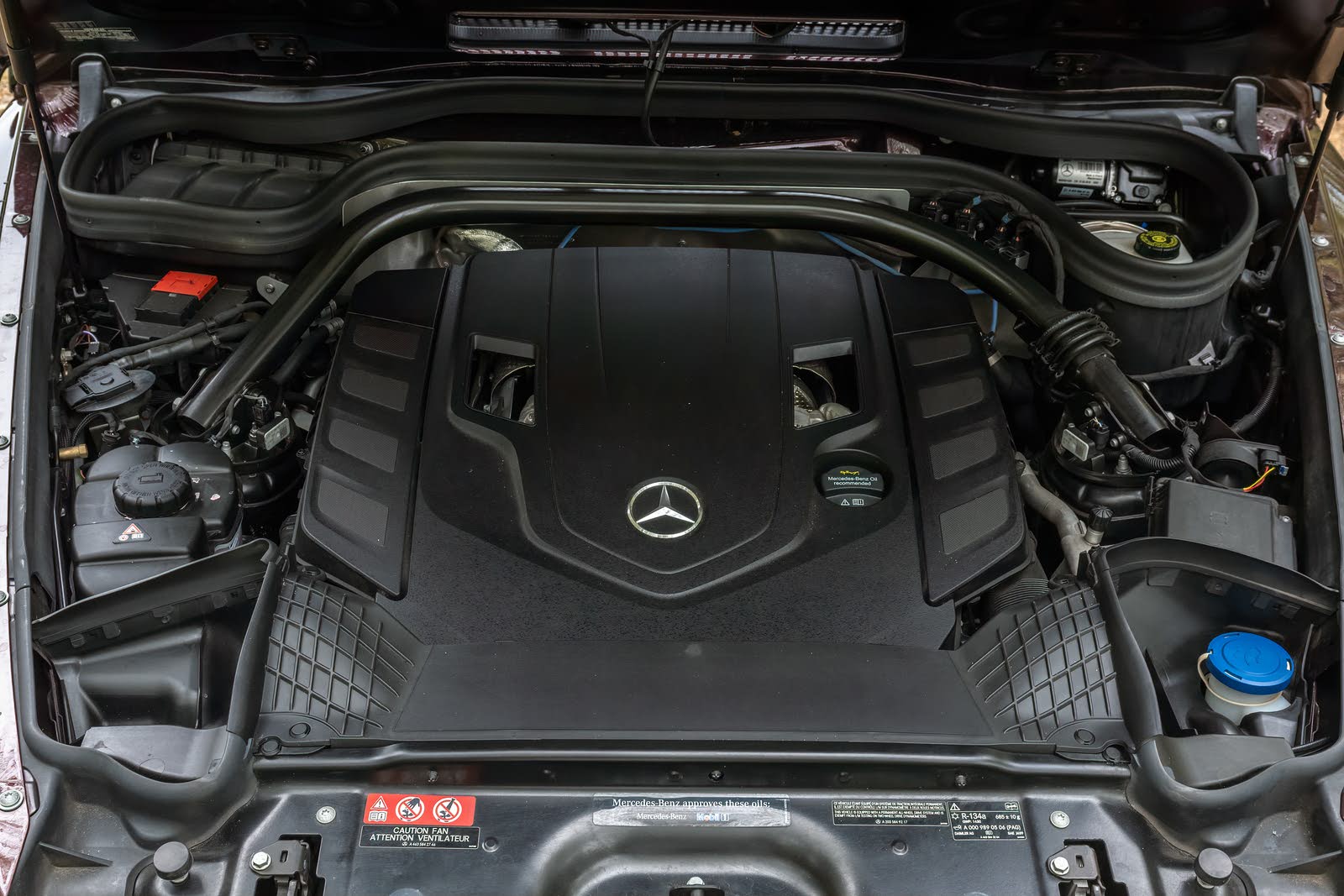 Our G550 test car came with a 4.0-liter twin-turbo V8 making 416 horsepower and 450 pound-feet of torque, sent through a 9-speed automatic transmission connected to a 2-speed transfer case and permanent 4-wheel drive (4WD) with three locking differentials. All four wheels are always powered, unlike the fuel-saving, sportier setups in conventional SUVs that switch between 2-wheel drive (2WD) and 4WD. The locking differentials split power evenly across each axle. Having one differential is plenty. Having three is incredible. I rode with the G's test drivers in Austria, who evaluate these trucks on rocky precipices and narrow forest trails about an hour from the factory. Never in my life have I flown down a mountain—I'm talking 30-plus miles per hour in areas where you should crawl at 10 mph—or felt like I would be ejected through a roof. Abusing a G-Class, as the Germans will tell you, is impossible. Of course, it's fallible, such as when my driver got us stuck and teetered off a slippery snow bank, but all it needed was tire chains. Not much harm can come to a vehicle that feels like it's carved from a single block of steel.

The 2019 G-Class ditches the live front axle for a fully independent suspension, swaps out the recirculating-ball steering for an electric rack-and-pinion system, and offers adaptive dampers as an option. Essentially, these changes transform the G-Class from a fast U-Haul moving van into something approaching a normal SUV. My G550 had the adaptive dampers, and they made an awfully big difference compared to the 2016 G63 AMG and 2011 G550 models I previously tested. The 2019 truck is easier to steer on the highway, fairly accurate about where you point it, and more composed over rough surfaces.

But it still leans like a drunken retiree on a cruise ship. And the new G will most definitely, without a doubt, roll over at higher cornering speeds. That's why Mercedes does not let you disable the stability control—and it's why that stability control stabbed the brakes every time I steered sharply into a corner at anything above 25 mph. It is the most aggressive system I've ever tested. Same goes for the active lane-keeping system, which unlike in every other Mercedes, turns on by default and requires a 2-second hold on its switch to deactivate. Even the slightest tire over the line, such as moving onto a shoulder to pass a turning car, will cause a hard shake at the wheel to get the G back in the lane. This was all highly annoying and a reminder of the G's old-world dimensions. Sure, it's a few inches wider than before, but it's still very narrow for a modern SUV. Combine that with a short wheelbase, a roof that reaches higher than a Range Rover's with air springs in off-road height, and a high center of gravity. Wide 275-mm tires can't offset the G's nearly three tons, either. Understand the G's physical limits early, and back off appropriately.

But not in a straight line, where the G-Class can embarrass most sports cars. The power surge from flooring the accelerator causes such an abrupt weight transfer that the front axle feels like it could lift into the air. It's tremendous. Side exhaust pipes let the V8 crackle and rumble into the cabin, and that's without the optional sport exhaust system. The brakes are also fantastic. The AMG G63 tunes up this engine to 577 hp and 627 lb-ft of torque. Like a middle schooler operating a table saw in shop class, the G is best driven with extreme caution. 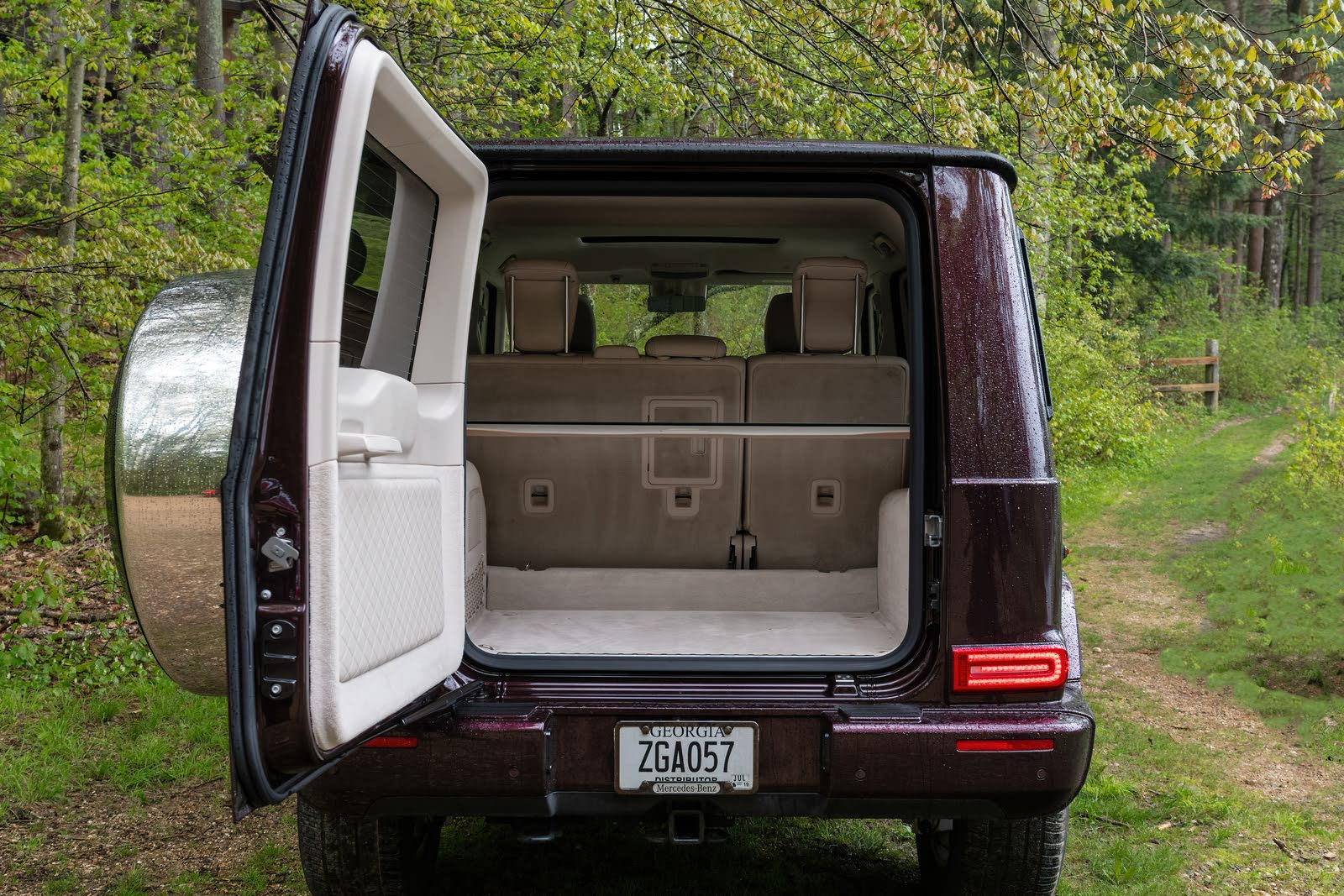 Unfortunately, the elements that make the G-Class so endearing as a wheeled cinder block do not translate into meeting modern expectations of space and utility. The hard-core drivetrain robs front passengers of legroom, so you're left with narrow footwells. Only the front passenger gets a grab handle on the dash (another vestigial part), so it's tough to get in and out. Rear passengers have scant legroom, too, and the door openings are even more narrow than those in front. The left-hinged tailgate swings out like a giant safe's door, and it's just as heavy. The 38-cubic-foot cargo area is spacious, but the rear axle and wheel humps intrude. The moonroof is tiny, and there's no panoramic option. Then there's the clearance issue, which you'll discover when you inch the G into city garages and pray the roof won't scrape anything. It barely fits (and sometimes it won't at all). At least rainwater no longer spills off the roof onto the windshield when you hit the brakes. The circular headlights are almost as compromised as sealed-beam units from the 1980s. The LEDs are bright enough, but the pattern is poorly dispersed. There's no front camera on the G550 because the brush bar blocks it, and the rear camera, despite being moved to a low position, is partially blocked by the enormous spare tire. Charming, right?

Otherwise, the cabin is well laid-out and offers excellent outward visibility. Shortcut buttons help to operate the infotainment system, which is controlled by Mercedes-Benz's Comand rotary knob or a thumb pad on the steering wheel. But it's not as intuitive as or available with a touchscreen like the MBUX system featured in the new A-Class and other models. 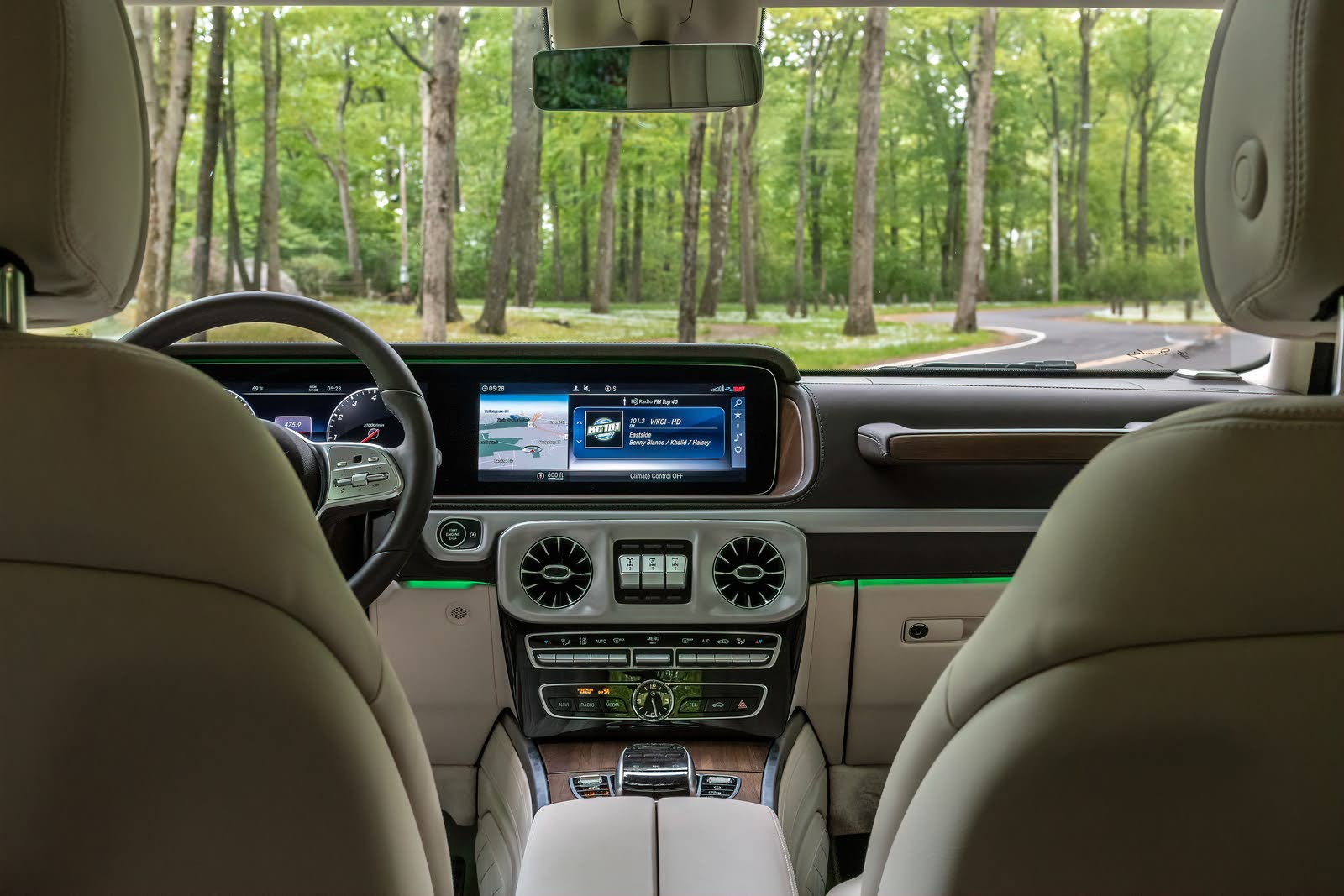 There are other things missing than cameras angled in the right directions. The latest semi-automated cruise control isn't offered on the G-Class, so forget about active steering on marked highways or other Mercedes features like Evasive Steering Assist. A head-up display wouldn't work on the G's upright windshield, so Mercedes doesn't offer one. Even the Burmester stereo uses some old speaker placements from the previous G, which detracts from its sound quality, and it lacks the multiple surround modes found in the CLS.

The Comand infotainment system, with its customizable instrument panel, is a showpiece here, just as it is elsewhere across the Mercedes lineup. It's crisp, colorful, and very slick, even if many features—such as the ability to switch radio sources—are buried in submenus. The touchpads let you control the map from the steering wheel, although you'll need some time to get the hang of it. Seat massagers are heavenly, as is the ability to simultaneously heat and cool the front seats. Plenty of other modern conveniences, from WiFi to live traffic, are within this feature-rich system. But don't expect everything. There is no keyless entry because the door handles are 40 years old and have push-button lock cylinders to open them. If anything, you'll be impressed by how hard you need to slam these doors. 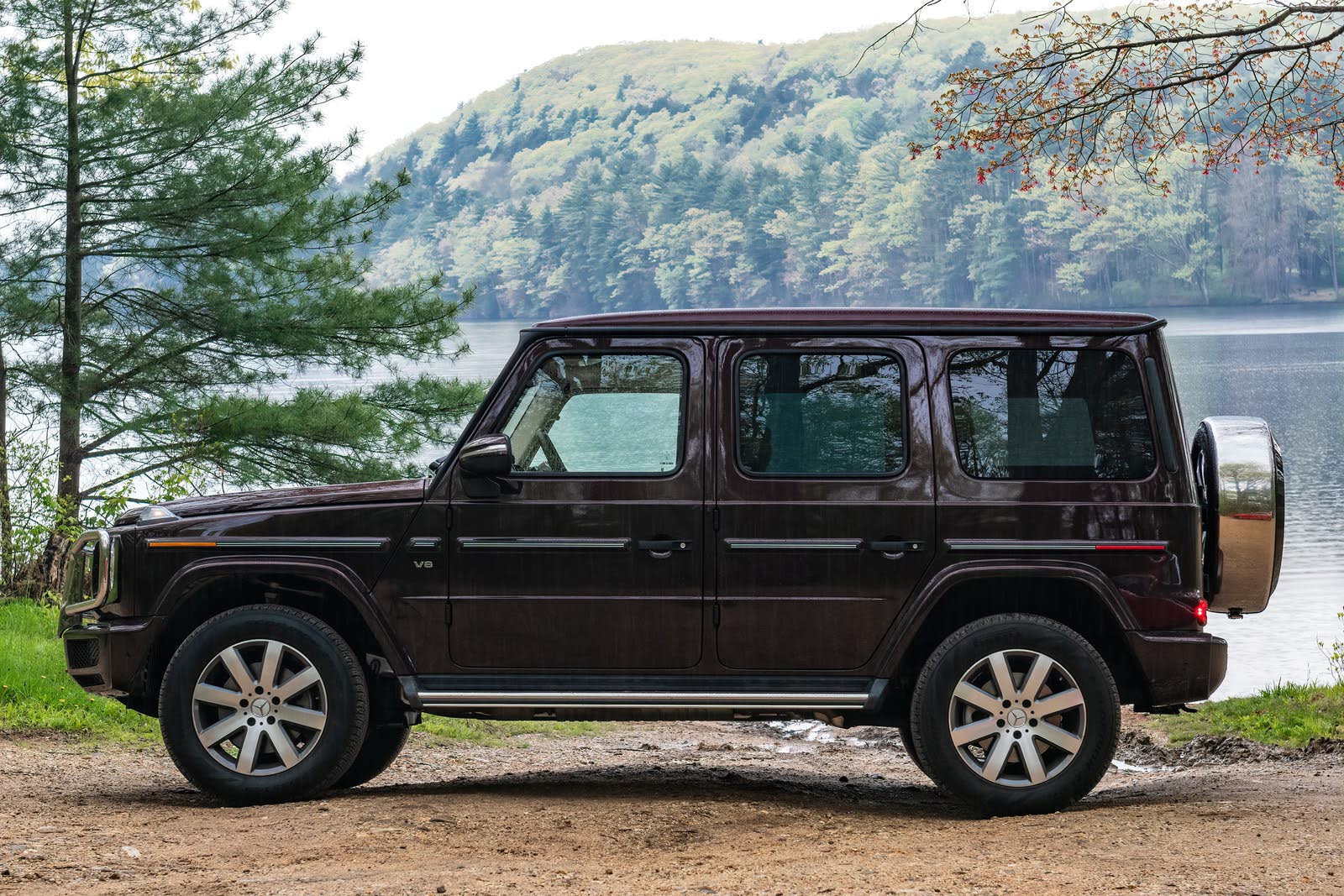 The G-Class has not and never will be tested by the National Highway Traffic Safety Administration (NHTSA) or the Insurance Institute for Highway Safety (IIHS) because it is a boutique, low-volume luxury vehicle. The G-Class has aced tests from the Euro NCAP overseas and is, on its own, a safe vehicle. But its increased tendency to roll over—more so than other SUVs—means it's not the ideal choice for young and inexperienced drivers or families. 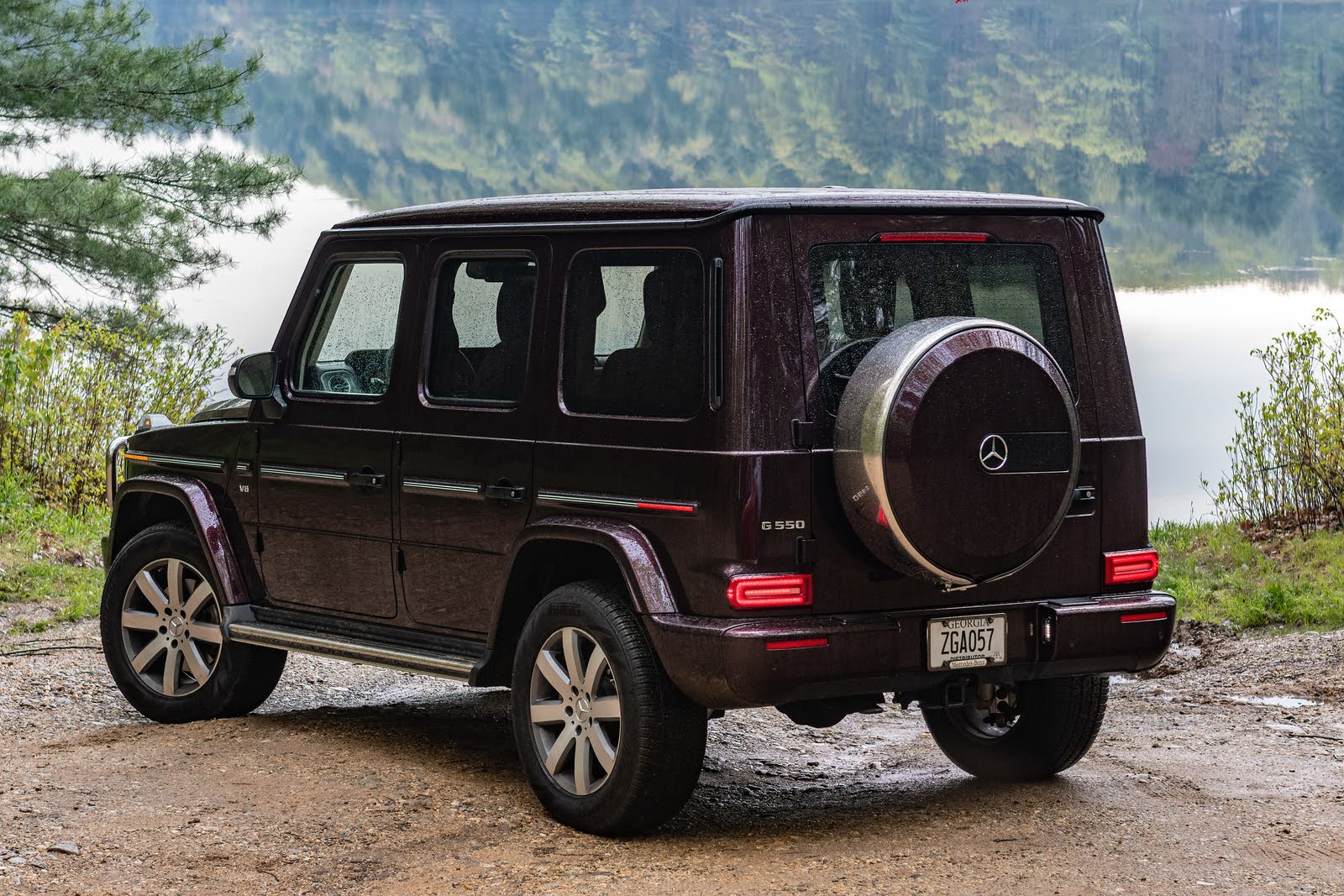 What's your take on the 2019 Mercedes-Benz G-Class?

Have you driven a 2019 Mercedes-Benz G-Class?
Rank This Car