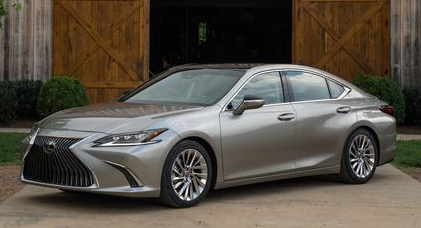 Looking for a Used ES Hybrid in your area?

While the Lexus ES has been around for a couple of decades, the ES Hybrid variant only showed up in 2013 with the release of the sixth-generation model. The hybrid was immediately successful, so the 2019 ground-up redesign of the ES includes the popular hybrid.

Looking at the new ES Hybrid, car buyers find a shape that is at once reminiscent of the previous models and altogether new. It starts at the front end with the smoothest iteration of the Lexus spindle-grille to date. A single crease wraps across the entirety of the front end, underlining the headlights as it curves downward toward the ends of the bumper, echoed by a similar crease at the rear. Thanks to a new structure, Lexus was able to alter the ES Hybrid’s dimensions in flattering ways, especially the 2-inch increase between the front and rear wheels. As before, there’s not much to visually differentiate the ES Hybrid from its gasoline-only counterpart—which is a good thing—because it means that both are equally sleek and handsome.

Inside, the ES Hybrid ramps up the edgy sport theme established by the previous model. An asymmetrical interior prioritizes driver comfort and ergonomics, a design concept Lexus calls its “Seat In Control.” Designers have made sure that everything the driver interacts with is pleasing to the touch. Beyond that, the cabin benefits from increased storage room with a larger center console and door pockets that are capable of holding 20-ounce drink bottles or a 9.7-inch tablet. The biggest news, however, is the relocation of the battery to an area beneath the rear seats. Not only does this improve the ES Hybrid’s front-to-rear weight ratio and provide for better driving dynamics, it frees up additional space in the trunk and means that the hybrid now has the same 16.7 cubic feet of trunk storage as the gasoline model.

New interfaces are dispersed throughout the ES Hybrid’s cabin, too. Front-and-center sits a revised instrument panel with a crisp 7-inch LCD embedded within. The infotainment screen has been relocated to sit above the dashboard, putting it within the natural sightline of the driver without raising the rest of the dashboard. It measures 8 inches in standard form or 12.3 inches when equipped with the optional navigation system that combines both on-board information and cloud-based data for improved directions. The system is Apple CarPlay enabled, and it can interact with Alexa-enabled smart home devices. It’s all controlled by a new touchpad with a larger surface area and intuitive voice commands.

All ES Hybrids are powered by a 2.5-liter inline 4-cylinder engine and electric motor inside of a revised hybrid transaxle. Horsepower is up by 20, to 215, while torque increases by 12 pound-feet. Official fuel economy figures have not yet been released, but Lexus estimates 44 miles per gallon—a ten-percent increase. The engineers set about improving the driving characteristics of its hybrid powertrain by tuning it to deliver acceleration in a more linear fashion. There’s a Standard sport mode that increases torque at lower speeds and enables the use of paddle shifters to run through six simulated gears. Finally, there’s the new Auto Glide Control (AGC) system. When in Eco mode, AGC places the car in a coast mode as soon as the driver releases the accelerator; this allows the car to decelerate at a more predictable rate and keeps the driver from alternating between brake and accelerator.

The ES Hybrid has always been at the forefront of safety, and the new model is no exception. For 2019, the entire Lexus Safety System+ 2.0 is standard equipment. The pre-collision system has been enhanced with both a radar and a camera sensor that can now detect bicyclists and obstacles in low-light settings. Lane-departure assist and lane-keep assist are standard, and the new adaptive cruise control works at all speeds, providing smoother braking and acceleration in thick traffic. Lastly, Lexus has added a road-sign recognition program that can read certain signs and display them to the driver.

It’s hard to find a car that’s as well-rounded as the ES Hybrid. It’s stylish, efficient, safe, luxurious, and high-tech. The older model was competitive, so the new 2019 version shows that Lexus isn’t happy resting on its laurels. Look for more information soon and a rollout in later 2018.

Have you driven a 2019 Lexus ES Hybrid?
Rank This Car

Looking for a Used ES Hybrid in your area?

How long can a lexus go on one charge