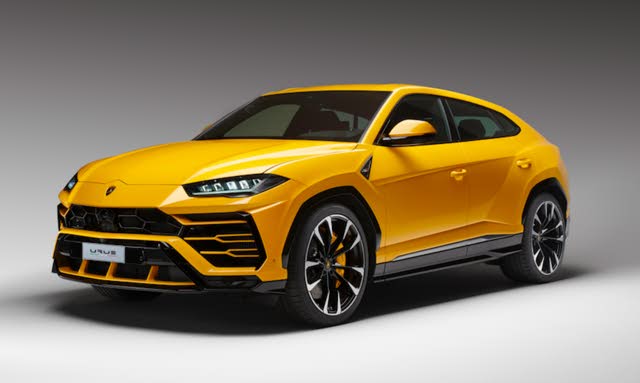 The word is in: SUVs and crossovers are all the rage. As a result, the past few years have seen the release of these high-riding vehicles from historically luxury car-only brands like Bentley, Maserati, and Rolls-Royce. For 2019, Lamborghini throws its hat into the ring with its all-new Urus SUV. Like other Lamborghini models, the name “Urus” is bull-themed and refers to a species that’s the ancestor of modern domestic cattle.

The Urus’s front end confronts you with a full-width grille and a wide, athletic stance. In traditional Lamborghini fashion, the headlights are on a separate plane above the grille. The roof slopes aggressively front to rear, and there are power bulges around each wheel with standard 21-inch wheels that blend street and off-road looks. At the rear, prominent spoilers sit above and below the rear window. The “Lamborghini” script runs across a black bar between the taillights. South of all that sits a massive rear diffuser flanked by dual-exhaust tips. It all adds up to a look that’s unmistakably Lamborghini, even if it is a bit taller than usual.

If you’ve seen the recent Aventador and Huracan models, then the interior of the Urus should look familiar. It makes use of the same hexagonal shapes, tall consoles, and edgy switchgear, but everything looks just a bit more rugged. Of particular note are the three high-resolution LCDs in the dashboard: one for the instrument cluster, one for the infotainment system, and one to handle climate-control functions. Lamborghini lets you select between a bench seat or bucket seats in the rear, for 4- or 5-seat capacity, respectively. The Urus gets a maximum of 21.75 cubic feet behind the second row.

The Urus offers performance in spades. It’s the first Lamborghini in three decades to house an 8-cylinder engine, as opposed to a 10- or 12-cylinder unit, but that motor is an impressive twin-turbocharged 4.0-liter V8 with 650 horsepower and 627 pound-feet of torque. It’s joined to an 8-speed automatic transmission with paddle shifters, sending power to all four wheels, up to 70 percent up front and as much as 87 percent to the rear. There’s also a rear torque-vectoring differential and rear-wheel steering working to keep the big Urus firmly in line. You’ll find as many as six driving modes, depending on how you spec the Urus. Lamborghini claims a 0-62 time of just 3.6 seconds and a top speed of around 190 mph.

Plenty comes standard on the Urus, including standard keyless access and start, navigation, adaptive cruise control, forward-collision warning with automatic emergency braking, automatic high beams, a night-vision forward camera, parking sensors all around, and a hands-free tailgate. In the usual fashion, it also offers a plethora of options, from several different types of upholstery, to a heated steering wheel, to dual screens on the front seatbacks for rear passengers.

The Lamborghini Urus is the brand’s introduction into SUVs, and like everything else from Lamborghini, it’s dramatically styled, luxurious, and impressive in terms of performance.

What's your take on the 2019 Lamborghini Urus?

Have you driven a 2019 Lamborghini Urus?
Rank This Car

Why Does My Ad Say 2 Owners And I Am The Only One?

I placed an ad and it says there were 2 owners. I am the only owner and it won't allow me to change it.