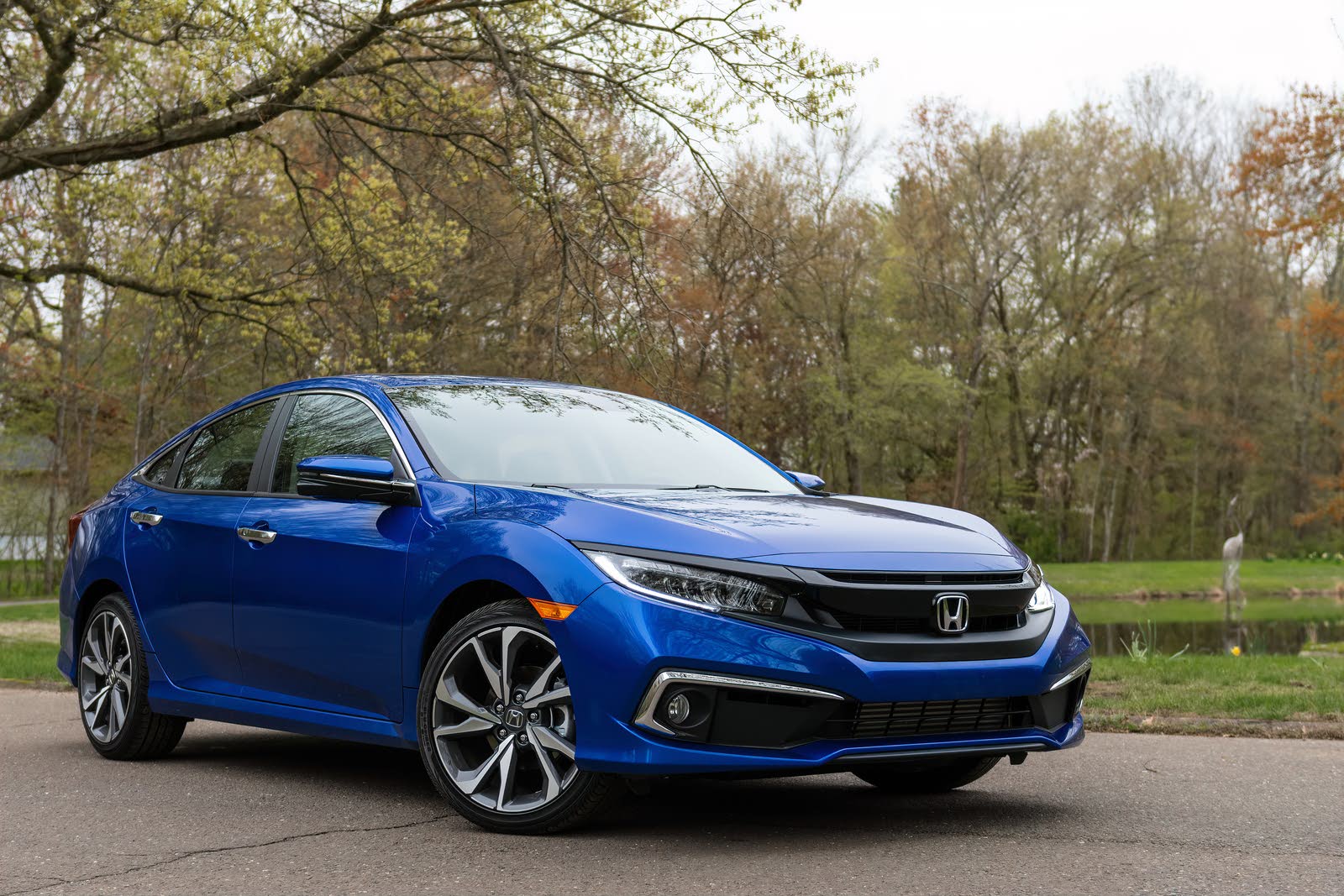 The tenth-generation Civic has been out since 2016, and for 2019, Honda makes only minor tweaks to this compact car's winning formula of style, value, and performance. Lots of cars are good these days, but the Civic has been consistently good for more than 45 years. This is a car that drives and feels like a more expensive car, and whether you choose a sedan, coupe, or hatchback among four engines and two transmissions—hooray for variety—the Civic rewards you. The 2019 model reminds us why. 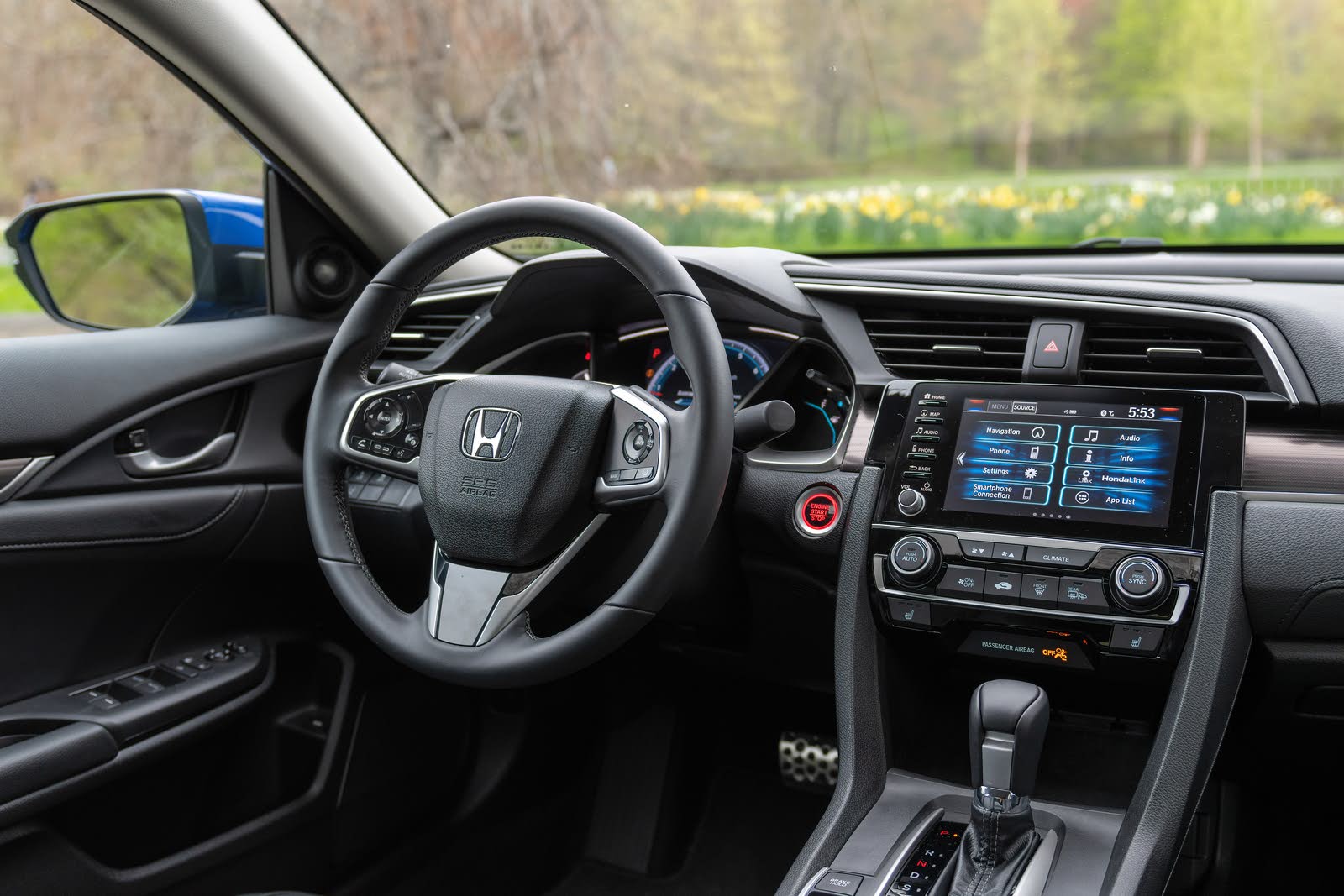 Against the 2019 Mazda3, the 2019 Civic loses a couple of points in the Look and Feel department. The Mazda looks and feels like a way more expensive car—as if it were designed to attract buyers away from an Audi A3 or Mercedes-Benz A-Class. It's easily the most stylish entry-level compact car today. But the Civic brings its own brand of upscale style, with a new gloss-black upper grille, a revised lower bumper, and larger 18-inch wheels. The sedan's silhouette is graceful, not frumpy. When it came out, I compared its profile to an Audi A7's, and I stand by that today. The hood is long enough to balance the sizable cabin and short tail, which features wraparound LED lights like nothing else on sale. My Touring-trim test car came with chrome door handles and LED headlights that look like hundreds of tiny crystals—and these lights are as bright as they are pretty. For 2019, Honda added a new Sport trim with a center-mounted exhaust and some of the exterior flash of the performance-oriented Si trim for thousands of dollars less.

The Civic Hatchback is also available and is listed as a separate model on CarGurus. The 4-door hatchback has a tall and aggressive rear end—like a building was stacked onto the sedan's trunk. The Coupe model is the more balanced alternative to the hatchback, although the max-attack Civic Type R (also a separate model) is available only in hatchback form. That's basically a race car that dedicated speed freaks will buy—I love it—but it has almost nothing else in common with other Civics besides the H logo. On the Coupe and Hatchback, there are some unique paints that would look at home on a Lamborghini or Porsche (try lime green or a flat, bluish gray). In any color, you'll notice the Civic in traffic—in a good way.

The interior keeps a high-tech, yet simplified, theme. There's a central LCD screen for the tachometer and speedometer, a thin center stack with minimal buttons, and clean, linear lines. Panel gaps are tight, and the car's fit and finish feel high quality, even if the rear doors have hard plastic surfaces versus the padded ones up front. Despite a starting price under $20,000, the Civic has switchgear, buttons, and fabrics that feel built to last. 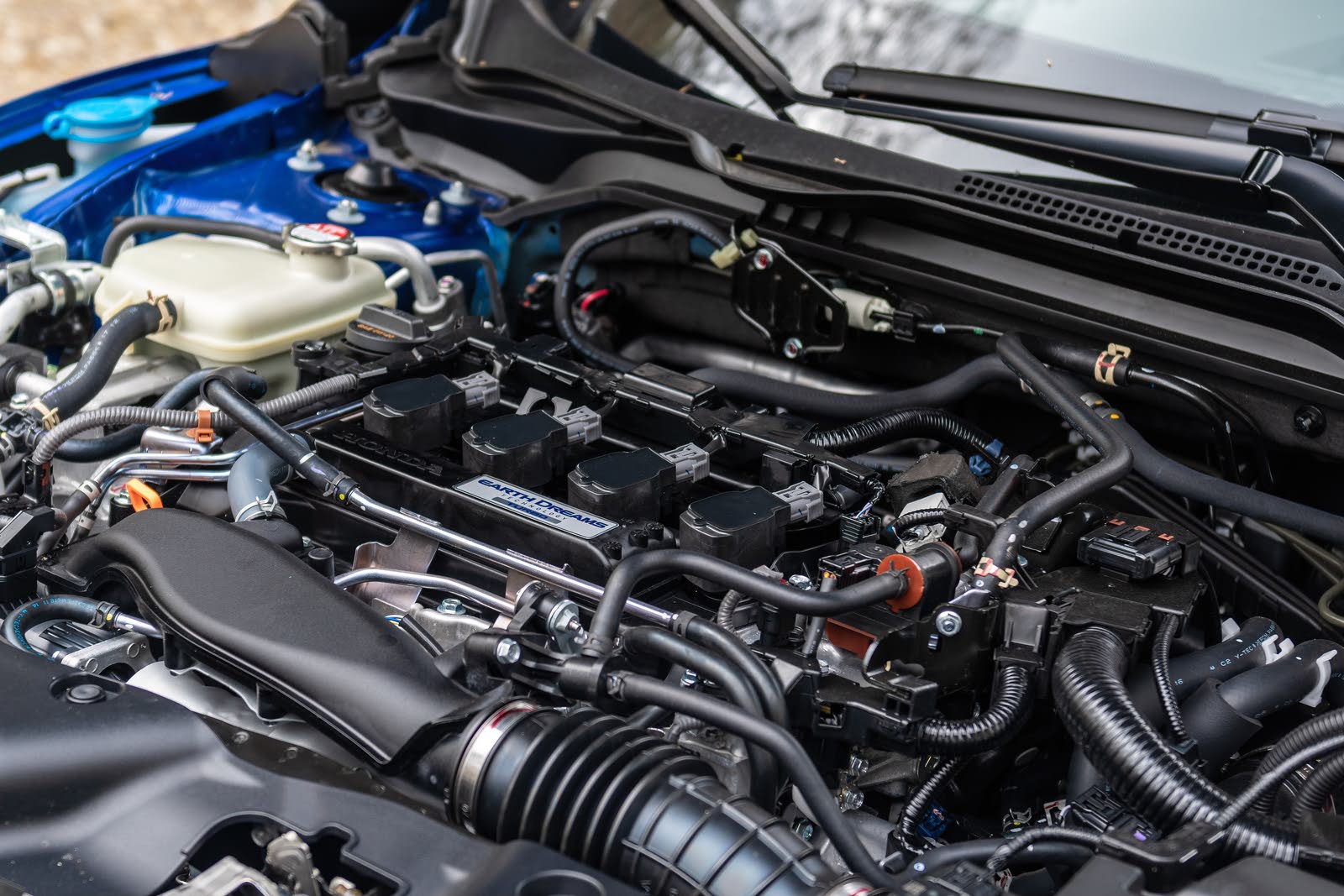 Civic LX and Sport sedans and coupes come with a 2.0-liter inline 4-cylinder engine with 158 horsepower and 138 pound-feet of torque. The sedans come standard with a 6-speed manual transmission, while on the coupe the manual is standard only on the Sport. EX and above trims, like my Touring, receive the turbocharged 1.5-liter inline-4 with 174 hp and 162 lb-ft. A continuously variable transmission (CVT) is the only choice (and optional on LX and Sport trims). The hatchback comes exclusively with the turbo engine on all trims (and it makes 180 hp in the Hatchback Sport, where the manual is standard). Front-wheel drive (FWD) is the only configuration available for all Civic models.

The real gems are in the Si, which boosts the 1.5-liter engine to 205 hp and 192 lb-ft (in either coupe or sedan), and the Type R, which produces a staggering 306 hp and 295 lb-ft from a heavily boosted and re-engineered 2.0-liter. Both the Si and Type R come exclusively with a stick shift.

But all of these engines deliver on smoothness and refinement. I recommend the turbo engine because it's quicker to respond and offers better mid-range acceleration than the base 2.0-liter. The manuals are great—Honda has a near-perfect feel for the clutch and shifter engagement—but the CVT is impressive on its own. It doesn't strain the engine at high revs or lug it at low revs while cruising, which is a common and annoying fault of CVTs in some other cars. It simulates gear ratios and doesn't get in the way of the Civic's performance.

Even with my test car's all-season tires, the Civic's ability to dance around turns and grip the pavement makes me wonder why so many shoppers keep buying taller crossovers. This is the car you buy to enjoy driving once the commute is over. Steering feel is superb and direct. The suspension manages to soak up bumps while keeping body roll in check. The brakes feel strong and grab assuredly when you stomp on the pedal. The Civic is set up for sportier drivers, but it won't put off anyone who just wants a safe, comfortable, and reliable car to get to work. This kind of balance is difficult to achieve, and Honda's done it. The fact that you don't need an Si or a Type R to feel this way is most impressive. 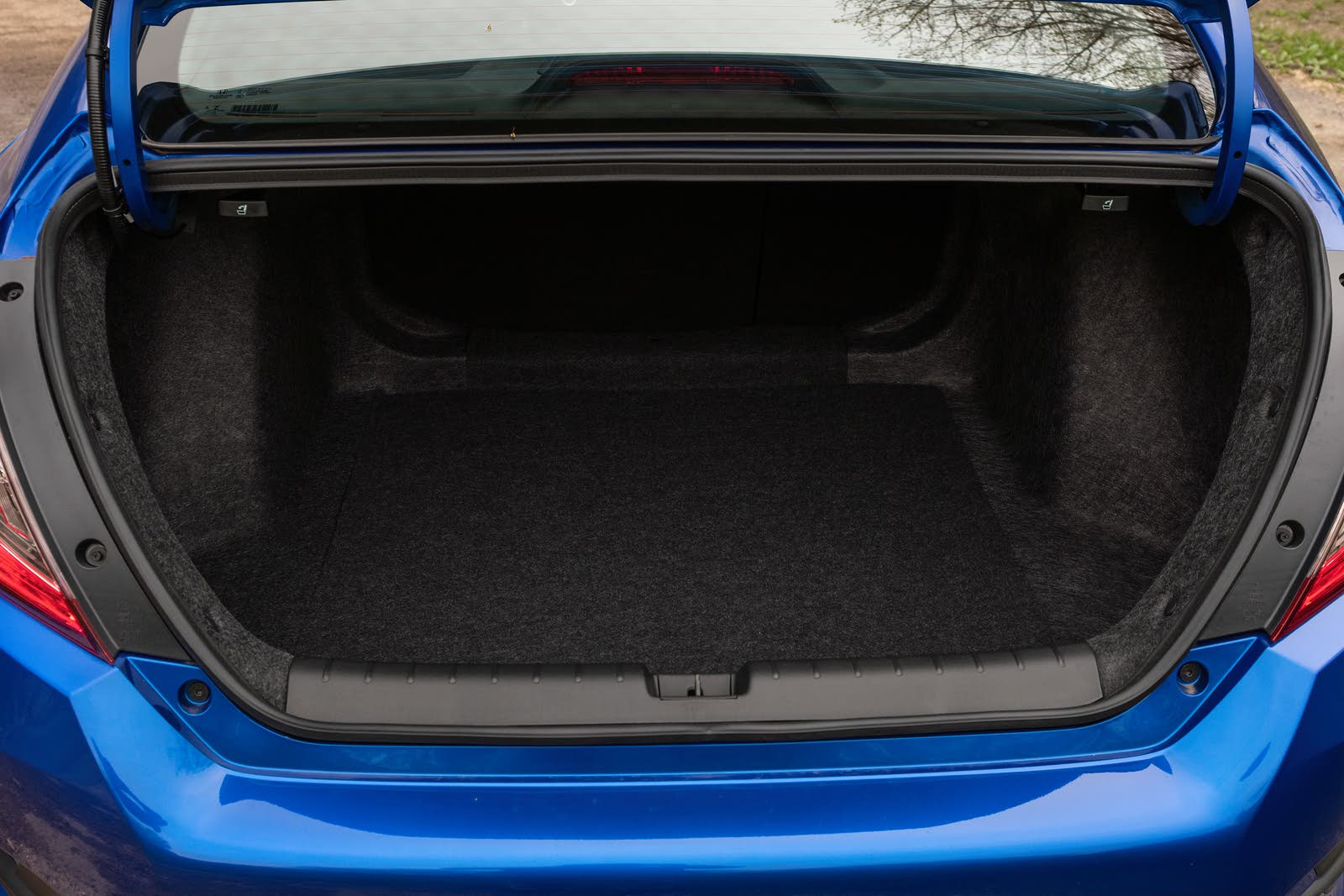 When equipped with a touchscreen, the 2019 Civic adds a volume knob and five shortcut buttons for the infotainment system. The lack of these controls was a serious inconvenience when we last tested the Civic sedan in 2016. Honda also added fan speed buttons below the screen. All of this makes the Civic far easier to use than it was when it relied on only touch-sensitive controls that smudged and washed out in sunlight. Other than that, the interior hasn't changed much, which is a good thing.

The three-spoke steering wheel can control the central display in the instrument panel for quick access to recent destinations, audio sources, phone numbers, trip information, and more. Analog gauges for fuel and coolant flank the central screen. This is a superior design to the digital/analog combo seen in the Passport and Pilot. Unlike those SUVs, there's a conventional PRNDL shifter instead of a wonky push-button/pull-tab setup.

Things feel surprisingly roomy in the rear seat, where Honda offers optional two-stage heated outboard seats. Head- and legroom are passable not just for short trips, but hours on end. I'd like to see air vents back here, which is the only real oversight. In most small cars, this kind of space is a luxury—but on the Civic, it's a given. Cargo space is significant for this size car, at 15.1 cubic feet in the trunk (for all sedans except our Touring, which has a rear subwoofer that drops total capacity to 14.7). The coupe's trunk is noticeably smaller, at 11.9 to 12.1 cubic feet. No surprise that the hatchback can swallow the most; it offers up to 25.7 cubic feet and as much as 46.2 cubic feet with the rear seats folded. The center console offers storage trays, while the center armrest can slide back to reveal a deep center storage bin with a sliding tray and a sliding set of cupholders below it—both of which are removable. Visibility in all cars, but especially the sedan, is good in all directions. Unfortunately, the best LED headlights are reserved for the Touring trims. 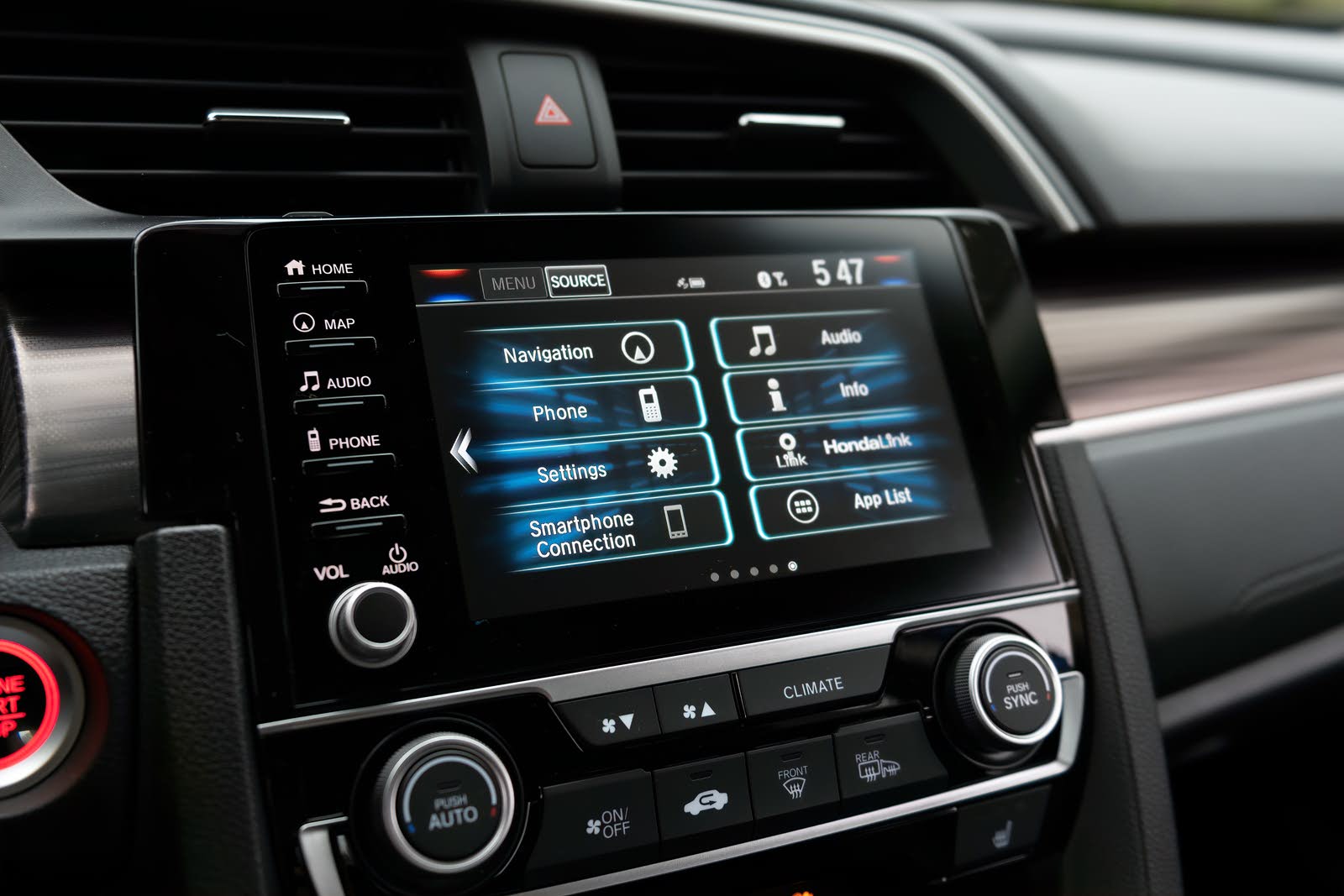 While the Civic's Android-based infotainment system was good in 2016, it's since been outclassed by the reskinned and updated interface seen in the Passport, Pilot, and Accord. This system looks dated, it's slower, and not all the menus are organized with the same logic and clarity you'll enjoy from Honda's newer, color-coded system. Honda's Garmin-based navigation is the one standout. The graphics here are better than the rest of the system's, plus the voice-based input for addresses is quick and accurate.

However, like with many cars, the Civic redeems itself with standard Apple CarPlay and Android Auto. The 450-watt, 10-speaker stereo on my Touring no longer rattled the back window in bass-heavy songs like it did in my 2016 test car, so that's an improvement. Plus, Honda offers LaneWatch on certain trims—that's a camera mounted on the right-side mirror that's pointed directly at your blind spot. Flick the turn signal, and the touchscreen reveals a live feed of who's there, along with lines noting how many car lengths away they are from your bumper. It's so simple and effective. 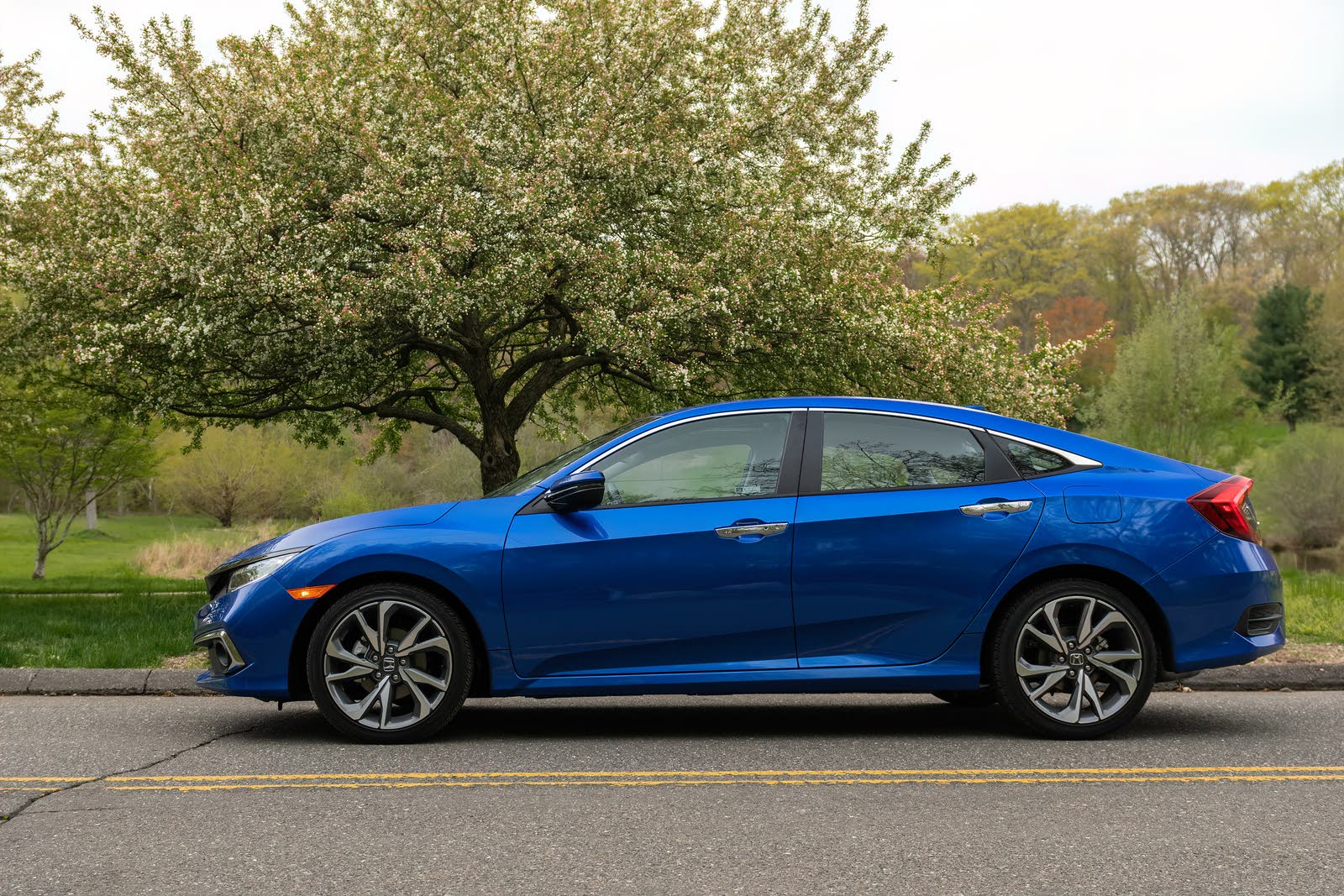 Honda Sensing is now standard on every trim level of the Civic except the Si and Type R. It includes forward-collision alert with emergency braking, lane-keep assist, and adaptive cruise control. This is a tremendous value and unlike most cars in this price category, where these features cost extra or are unavailable. The Insurance Institute for Highway Safety (IIHS) has rated various 2016–2018 Civic models with its top Good rating in all six crash tests (though it didn't rate the hatchback in the passenger's side small overlap front test). It also rated the Civic's crash-prevention features as Superior—its top rating—for how well the car can automatically brake to avoid a collision. The 2019 model has not been rated, though it is identical to earlier model years. The National Highway Traffic Safety Administration (NHTSA) awarded the 2019 Civic five stars in all categories, with the exception of four stars for the coupe's passenger-side frontal crash rating. 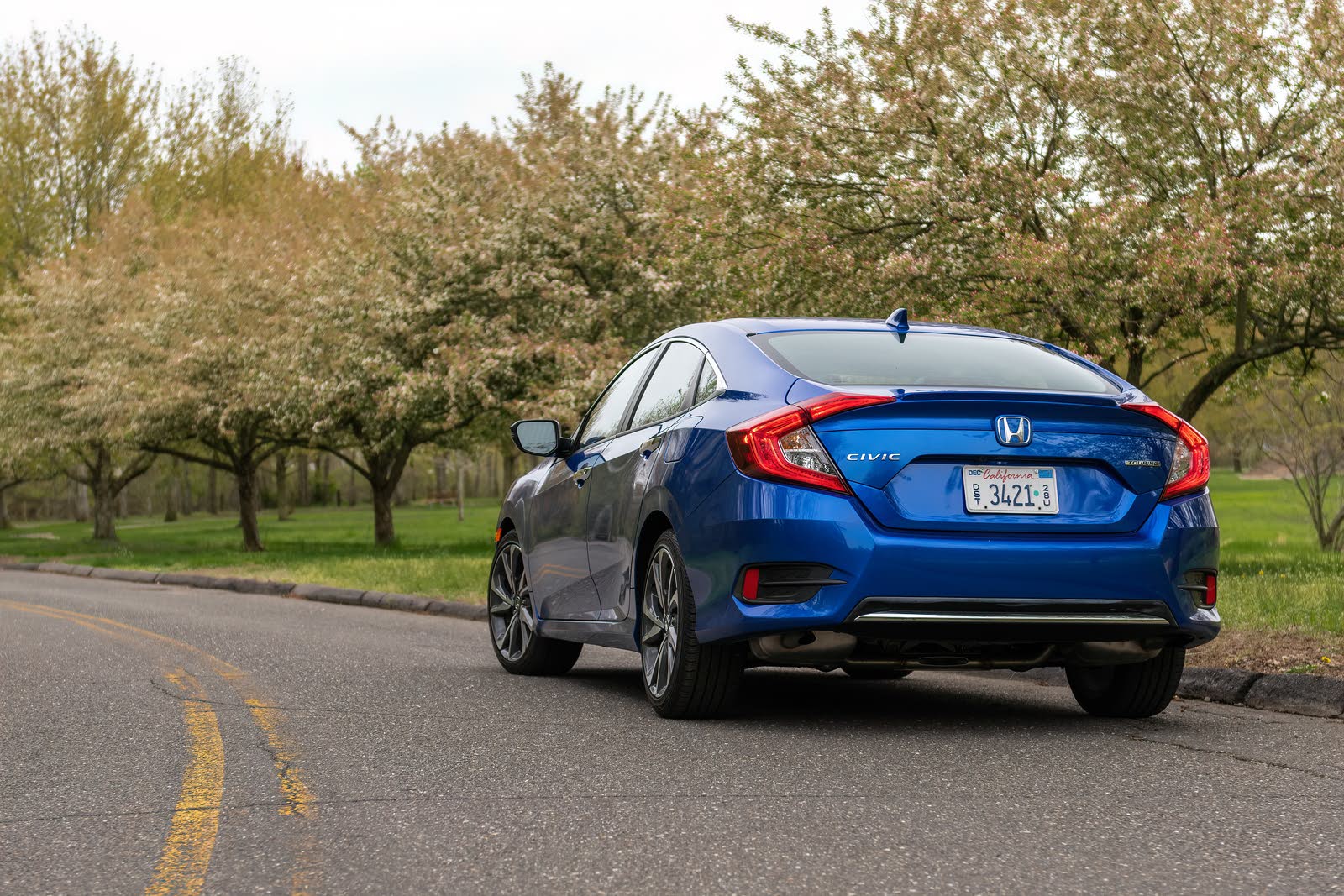 The 2019 Civic starts at $19,450, the Coupe at $20,650, and the Hatchback at $21,450. Unless you're taking home the Type R for $35,700, none of the Civic's four other trim levels (or three more on the coupe) crest $30,000, including the Si. My Touring test car was $28,220 including a $920 destination charge. It's the only trim that offers LED headlights, navigation, and the top-tier stereo. CarGurus recommends the EX trim, starting at $23,400. This is the mid-pack Civic with the turbo engine, moonroof, power driver's seat, and the touchscreen. Remember, Apple CarPlay and Android Auto are standard, so you don't need factory nav, and I don't think you'll pine for leather versus the standard (and good) cloth seats. For everything the Civic offers—and for how it drives—this is a great deal.

Bgmoxie Would you recommend this car for your grandma who has a bit of trouble getting in and out of cars? How do cars rank on the seat height?

ChristianWardlaw @Bgmoxie, your grandma wants something like a Kia Soul. "Hip point" is the technical reference for how high the seat cushion sits in relationship to the ground. A Civic's is low, and that makes it hard for older people to get into and out of a vehicle. Something like a Kia Soul, or Subaru Crosstrek, or anything else that sits higher off the ground is super-easy to slide into and out of.

Users ranked 2019 Honda Civic against other cars which they drove/owned. Each ranking was based on 9 categories. Here is the summary of top rankings.

Have you driven a 2019 Honda Civic?
Rank This Car

Do You Vest Your Sellers?

There is a car I'm interested in, but the "private" seller (who apparently is selling cars from his home) goes only by first name. It *seems* like a great deal, but you know what they say about thin...

Change From KPH To MPH On Honda Civic 2019

How do I change from KPH to MPH? Can't find it in manual...car was purchased in Australia

Are most of these Civic type r stick , looking for a automatic

How To Check Total Mileage

On my 2019 Honda Civic lx I can’t figure out how to check total mileage ?