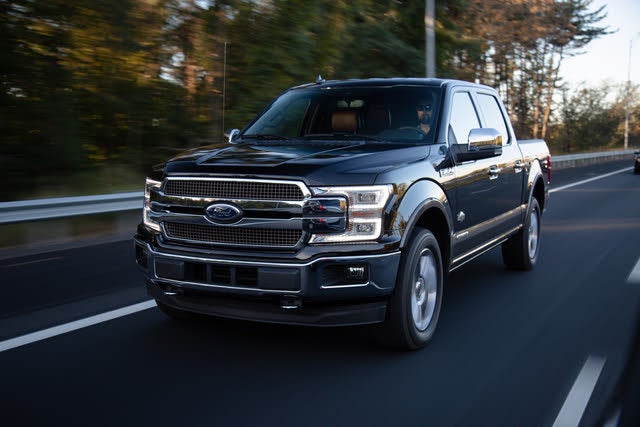 Average user score
4.7 ⁄ 5 stars
Based on 75 reviews
Review by Richard — I purchased a Ford F-150 sport because I valued the power seats on the driver and passenger side, and because I like the gear shifter in the center. I dont like it on the steering column. There are to... Read more
Review by Guru9VBM9K — Truck is nice. I did t realize how small a 5’5” bed really is. With a tool box you wo t fit anything g else. The lariat has all the features I wanted but it doesn’t have a garage door opener which see... Read more
Review by Guru7JPWL — This specific model is a Platinum trim and it is loaded. Im not sure what else could be added. I dont really have reference for comparison as I stepped down from F-250 Super Duty diesel to the F-150... Read more

The Ford F-150 employs a few modest updates for 2019 to stay relevant in the face of completely redesigned competitors. 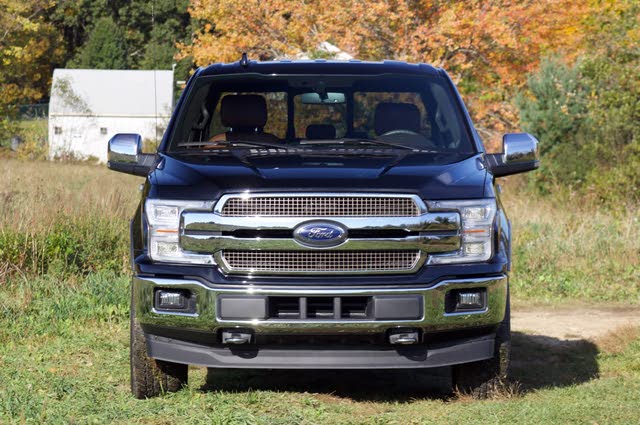 The notion of "luxury trucks" might seem a little weird if you haven’t bought a new truck in 20 years, but anyone who's been in the market lately should be more than familiar with the idea. Not only that, they should be more than accustomed to the sticker shock associated with these high-end, luxury pickups.

Some old-school types will scoff at how trucks have gotten soft or too expensive (or both), but good automakers build the cars and trucks people want, and shoppers have been snatching luxury trucks as fast as they can be built and shipped. These "soft" trucks offer a template for seemingly dozens of purposes. They can tow, haul, carry people and goods, play road-trip family car, and even be the ride for a night on the town. 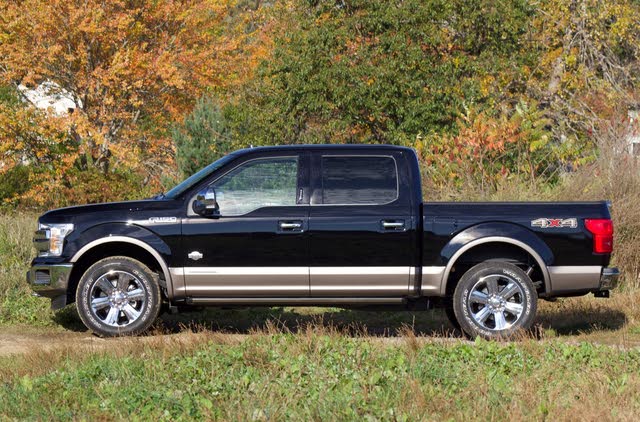 When the F-150 was redesigned for 2015, it garnered a ton of headlines. There was the twin-turbocharged EcoBoost, used as a high-feature engine (not to replace the V8, but as a legitimate alternative). And there was the expansive use of aluminum throughout its body panels. Ford refreshed the truck last year, so it’s been largely carried over. Expect no visual changes last year to this year.

General Motors has taken shots at the F-150’s use of aluminum in ads, suggesting the lightweight material would be more susceptible to damage. But the new Silverado uses aluminum for the hood, doors, and tailgate. Back in 2009, Chevy also hired Howie Long to star in an ad making fun of the F-150’s tailgate step. A decade later, the all-new 2019 GMC Sierra features the new Multi-Pro tailgate, which has a similar bed step. Maybe Chevy should just stick to its unbearable “Real People, Not Actors” ad campaign.

Trim levels for the F-150 are XL, XLT, Lariat, King Ranch, Platinum, Raptor, and Limited. The base XL is a true work truck, with few features other than a reversing camera, AM/FM radio, a 4.2-inch audio-system screen, and dynamic hitch assist for towing.

The XLT trim adds power windows and locks, a larger 8-inch Sync 3 infotainment screen, and a USB port. Moving up to the Lariat trim gets you a leather interior, heated and ventilated front seats, and satellite radio.

We drove the King Ranch, which has been offered since 2001. The GMC Sierra Denali arrived one year later in 2002, and together, these trucks helped start the modern luxury truck craze. The King Ranch offers an awesome new interior upholstery option called Camel Back. Buyers will also notice the “flying W” embroidered on the center console cover.

The Platinum takes luxury even further, pairing some of the features from the King Ranch with a unique wood-panel interior and power-deploying running boards.

The Raptor is a full-fledged off-road performance truck. It has a wide-body kit, added underbody armor, and specially designed Fox Racing Shox.

The Limited is the ultimate luxury truck. It features unique 22-inch polished aluminum wheels, a dual-panel moonroof, dual exhaust, and massaging seats, which are also an option our King Ranch had. Those seats are unreal and make the miles go by effortlessly. 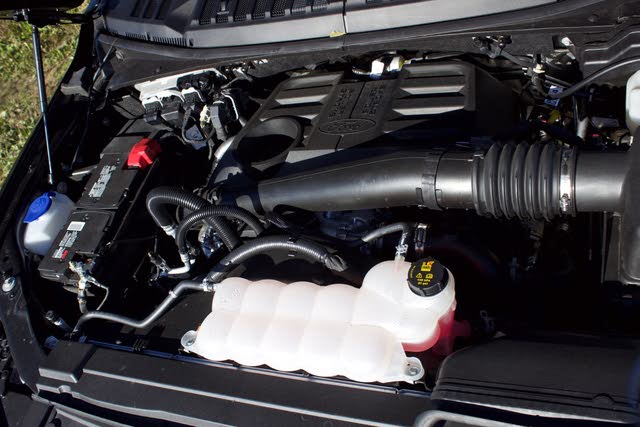 There’s a new addition to the F-150's engine lineup for 2019: a 3.0-liter Power Stroke turbodiesel V6. We had one in our King Ranch test truck. It makes 250 horsepower, which isn’t impressive, but it also makes 440 pound-feet of torque.

The diesel engine in our truck makes more torque than the V8, and when properly equipped, it can tow up to 11,400 pounds. While not best-in-class, that capacity should be enough for owners looking to do serious towing, like a horse or camping trailer.

Perhaps the best praise this engine can receive is that in most scenarios, you can’t tell it’s a diesel. Diesel engines, especially 4- and 6-cylinder ones, sometimes feel underpowered. They have specific power bands and perform best at particular RPMs. The F-150 puts power to the rear wheels or available 4-wheel drive through a 10-speed automatic transmission in all but the base trim, which pairs the less-advanced 6-speed automatic with a V6. This allows the diesel engine (and almost all other engines in the lineup, for that matter) to operate in their ideal power band for output and/or efficiency.

As a result, this engine can pull evenly and provide smooth, confident acceleration. It’s generally pretty quiet from inside the cabin as well. Step outside, and you can certainly tell it’s a diesel, but frankly, truck owners want to hear their diesel engine. If you want quiet while driving, however, the F-150 with the diesel engine delivers. It also makes for an easy transition to diesel-truck ownership for first-time truck owners.

As quiet and smooth as this engine is while driving, coming to a stop reveals it a bit more. The auto stop/start system shuts down the engine, and it rumbles off. As you pull away from a stop, the engine rumbles on again. Those transitions can be quite noticeable, despite Ford’s best efforts. Luckily, you can defeat this system with a button above the touchscreen.

Another big concern for these stop/start systems is the long-term wear-and-tear they might take on the engine. Ignition is one of the most violent parts of an engine’s life, even for an engine that’s asked to do the work of a full-size truck. Only time will tell what all the added starts will do to the life of stop/start-equipped engines.

The most efficient non-diesel engine is the 2.7-liter EcoBoost engine, which returns 20 mpg city, 26 highway, 22 combined with RWD. The least efficient setup is the V8 with 4WD, returning 16 mpg city, 22 highway, 18 combined. 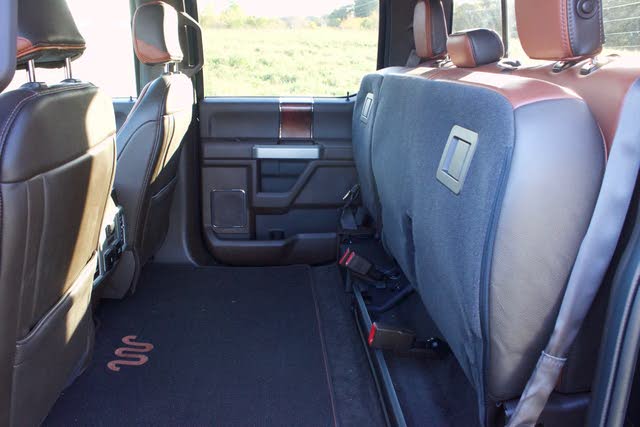 The SuperCrew that we drove had a simply massive cabin. Up front, it had deep cupholders, a massive center console, and large in-door bins that can hold large water bottles. Out back, it provides tons of legroom, no matter how far back you slide the front seats. If you need cargo space, the rear bench folds up, providing a massive load floor to stack up your gear. There’s also a small divider in the back of the in-cabin load floor for gear you don’t want mixing with larger items. 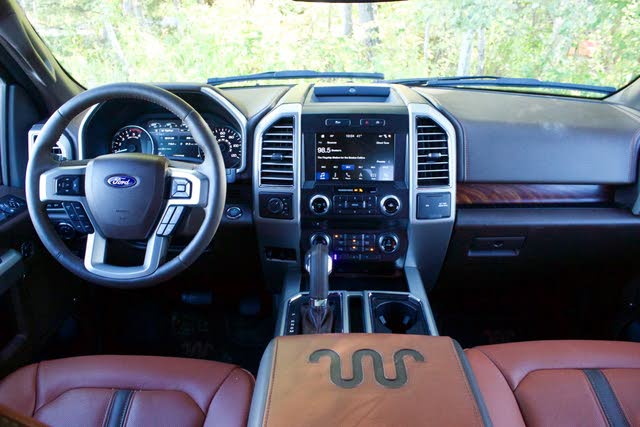 The base XL comes with the most basic form of Ford’s Sync infotainment system, which is a 4.2-inch center-stack screen with audio controls and Bluetooth connectivity. The XLT and higher trims come with Ford’s Sync 3 infotainment system, which comes with a larger 8-inch color touchscreen with easy-to-read fonts and icons and very intuitive menu navigation.

Sync 3 also supports Android Auto and Apple CarPlay, which has been great to use since it came out, but CarPlay has had one glaring problem—it forced you to use Apple Maps. After the recent iOS 12 update, CarPlay allows third-party map apps like Waze and Google Maps. Using Google Maps with CarPlay is a fantastic pairing, and I’m sure I’m not the only one that is happy about this change. 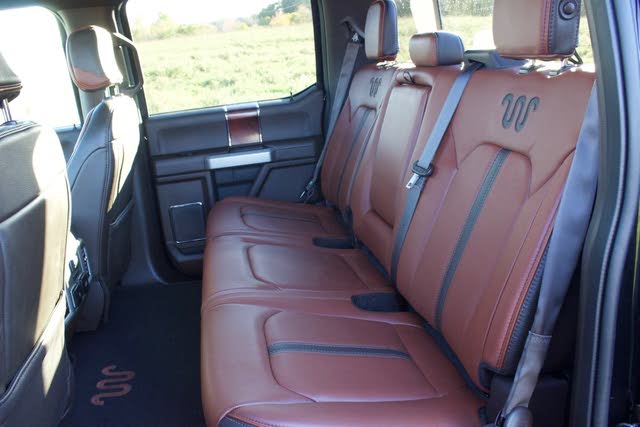 Standard safety features on the F-150 include a full array of front- and side-impact airbags, traction control, and a reversing camera.

For the 2019 model year, the incredibly helpful 360-degree camera system is standard on the Limited trim and optional for the rest of the lineup. It has the surround view that people expect, but there’s also a button that allows you to cycle through different individual angles. You can get a forward view for the trail or for when you want to creep very close to an obstacle without making contact. There are similar angles for the sides, and together, they allow you to maneuver the full-size pickup safely in tight street parking spots or a parking structure. 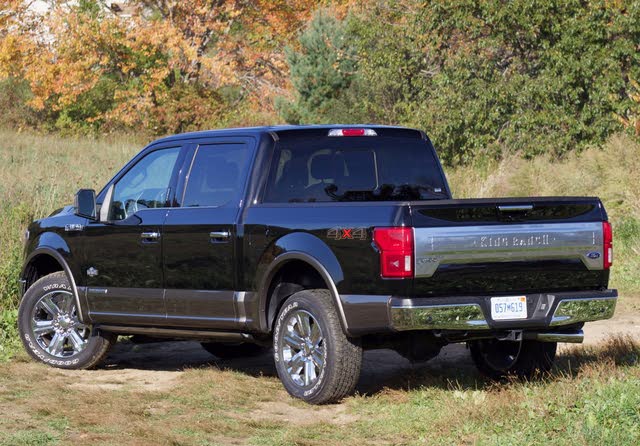 Singling out individual attributes may position one full-size truck over a competitor, but that single feature doesn’t paint the full picture. Each year, America's full-size trucks fight for position in every category, from towing capacity to size to the number of cupholders. So, if you were to isolate just interior comfort or even on-road driving manners, the all-new Ram 1500 might have the edge. But the Ram is a completely new ground-up redesign.

The F-150’s diesel engine is a solid blend of towing capability and fuel efficiency. It's emblematic of the F-150 as a whole, which might not target any particular superlatives, but when taken as a complete truck, offers a more well-rounded whole than the competition has been for some time.

GuruBDJBS Are the frozen door latches still features of the 2019 F150?

GuruCV7G4 Had 2012 3.5L EcoBoost F-150. Repeated left bank motor mis-fires. Ford could/would not completely fix the problem. Glad to get rid of it. Ford should have fixed it for all the buyers who had this problem, but chose to ignore.

Guru3PQ21 I have been travel araund the nation for about 3 weeks with the family in my FORD f150 and when we stop for rest and eat something we need a kind of table on the back of seat like the seats of airplanes for eat or work with the laptop. another recomendation for safety is to put a holder up of the side windows. I hope that ideas will be research for more confort to the travelers . att rrp364@hotmail.com

Users ranked 2019 Ford F-150 against other cars which they drove/owned. Each ranking was based on 9 categories. Here is the summary of top rankings.

no power to any of the 12volt sockets. checked and replaced all three fuses. check and found no power to either side of fuse holder. checked with key off,key on and engine running . all of the studs...

this is a 5.0 engine with 4X4 rear. What frames will fit this truck.

I have a Custom built Ford F150 truck. How can I list it so it is not overpriced

Base Package With Bucket Seats

What base package has bucket seats?