Looking for a Used HR-V in your area? 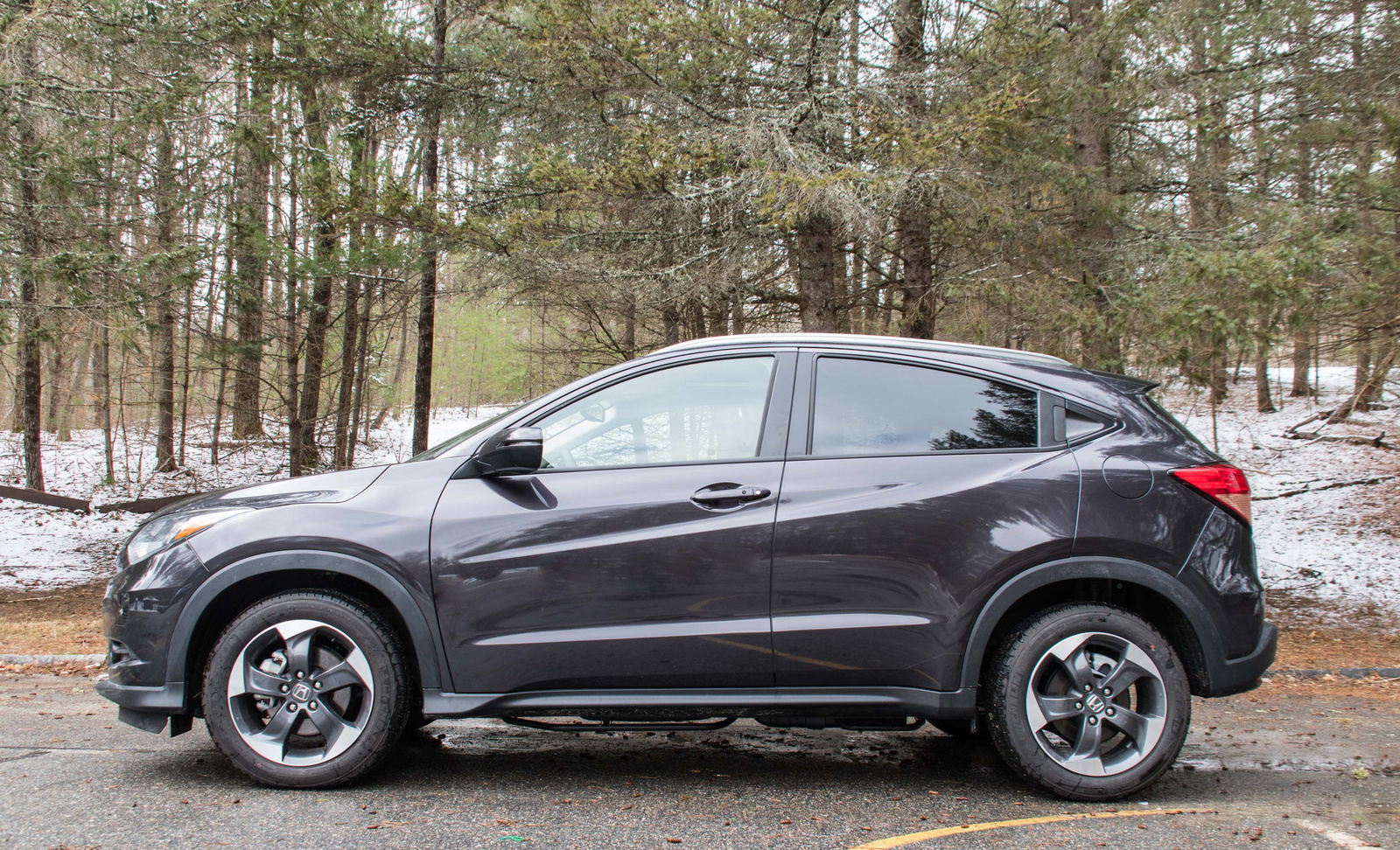 Introduced for 2016, the subcompact HR-V sits below the compact CR-V and midsize Pilot. It’s based on the Fit hatchback but offers higher ground clearance, optional all-wheel drive, and a more premium cabin. It’s also thousands of dollars less than the popular CR-V. When priced above $27,000, however, you might consider upgrading your seat. 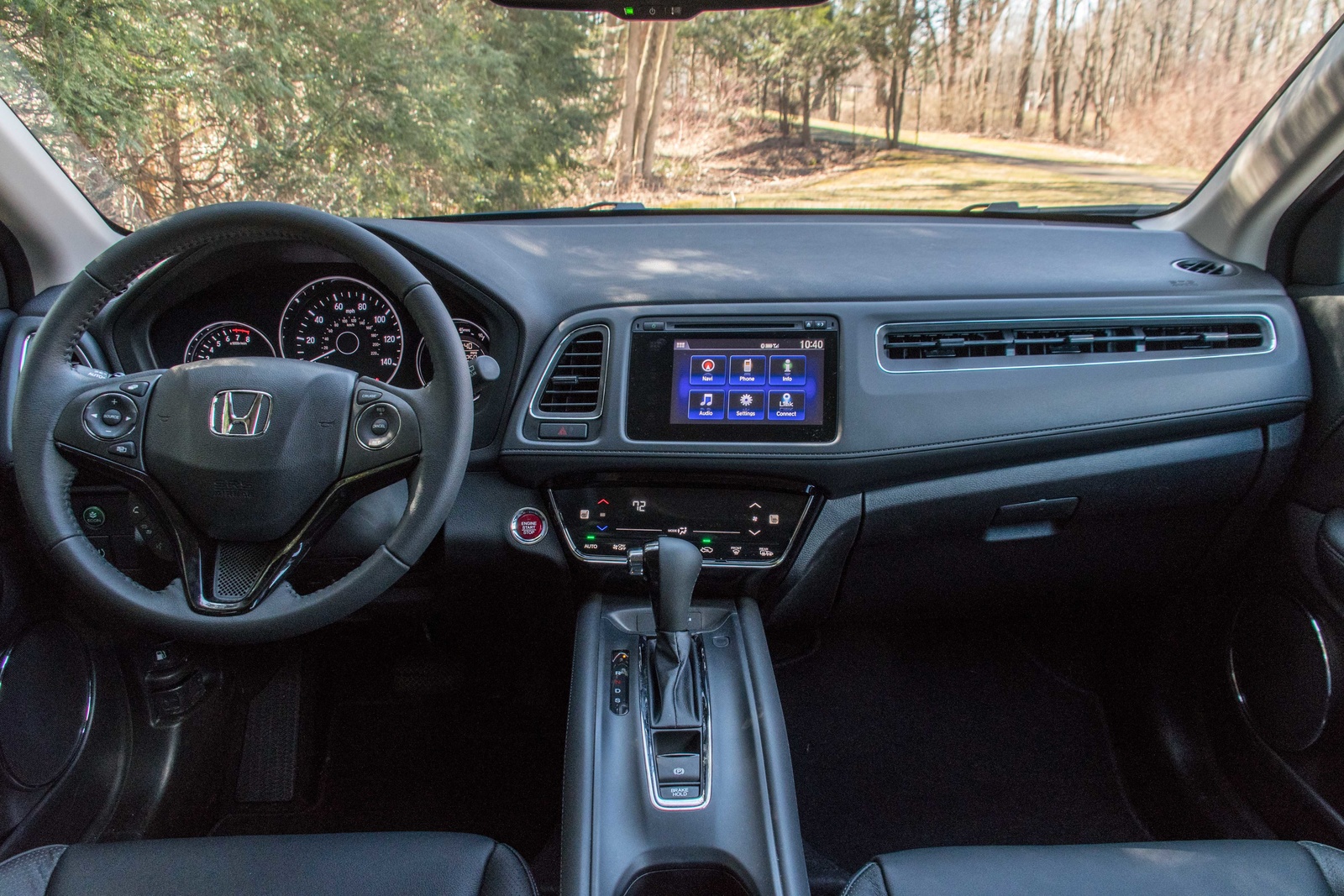 Those hidden, vertically mounted rear door handles make the HR-V look like a coupe, but the days of little two-door SUVs are mostly gone. The rounded roof and streamlined front fascia provide a clean, handsome appearance at any angle. By contrast, a CR-V, Civic, or an Accord looks downright aggressive with its sharper edges and thick chrome accents. Two-tone 17-inch wheels come standard on EX and EX-L trims, and thankfully, the days of plastic wheel covers are also gone. The base LX has similar alloys in one color. Exterior colors are limited to four basic shades (white, gray, black, and red) for LX and EX trims, while the EX-L offers eight, including a bright blue, green, silver, and the purplish-black seen on our test car. Large LED taillamps and generous expanses of glass allow an HR-V driver to easily see and be seen, unlike the significantly reduced visibility from inside a Toyota C-HR or Nissan Juke.

An all-black interior adorns all HR-V models, but only EX-L trims come with leather. We were impressed with the build quality and design. Panel gaps and finish are above the class standards, such as the padded upper trim on all four doors and the backlit climate controls that illuminate behind a shiny black cover trimmed in chrome. The faux stitching on the dash is convincingly upscale, plus that thin, wide strip of air vents for the passenger is a simple way to dress up what could have been a drab, boring place. Points to Honda for making the HR-V feel welcoming and well-made. 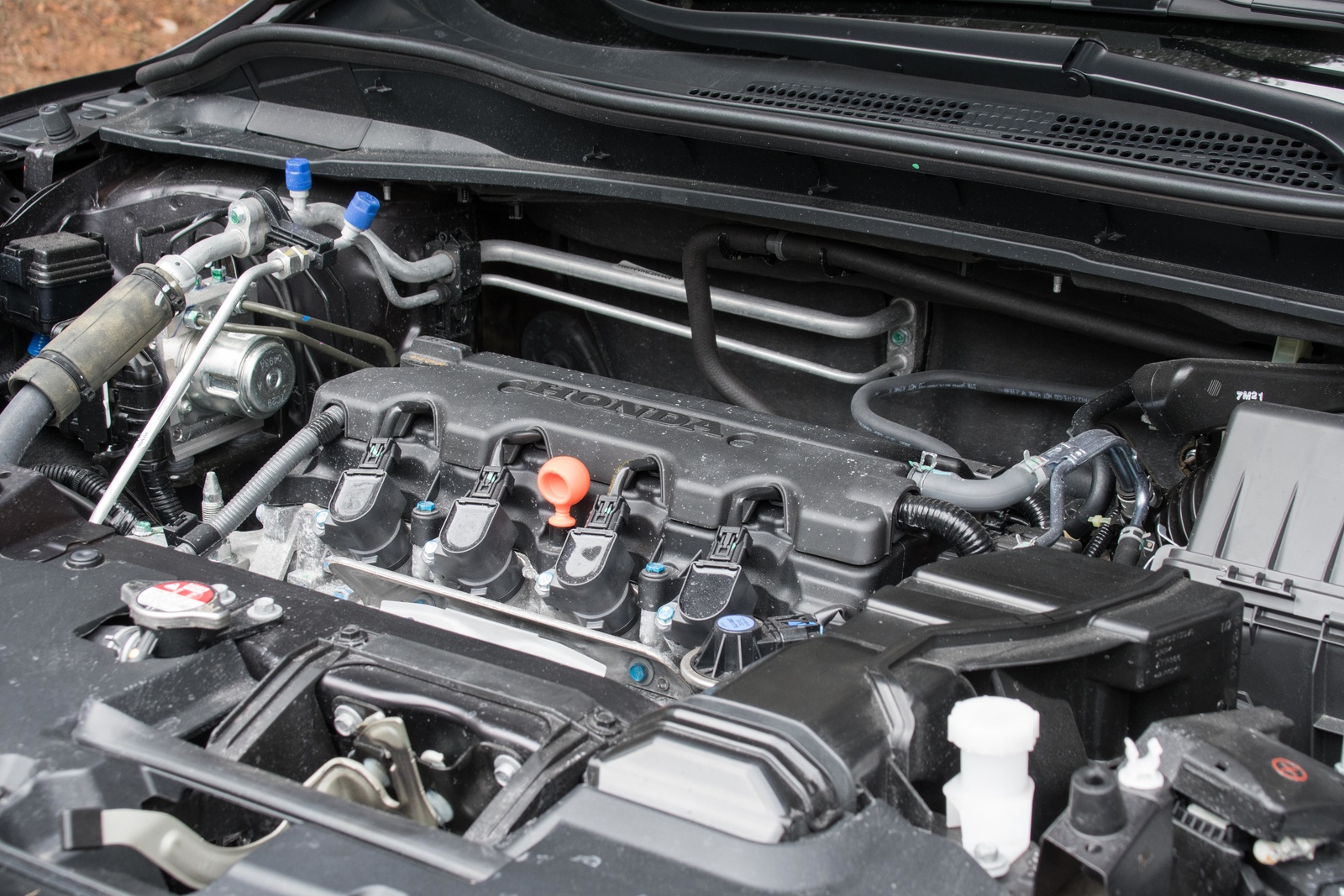 A single 1.8-liter 4-cylinder serves up 141 horsepower and 127 pound-feet of torque across all trims. The kicker: Honda offers its exemplary 6-speed manual transmission as standard on the front-wheel-drive (FWD) LX and EX. Not only is the manual quicker than the continuously variable transmission (CVT), it’s far more fun to drive and one of the few crossovers on sale that still offers a stick-shift. All-wheel drive (AWD) is optional on all trims and pairs exclusively with the CVT. Our AWD EX-L accelerated to low urban speeds without fuss, although the throttle was slightly jumpy off the line.

At highway speeds, the engine becomes coarse and loud. The CVT, without gears, will keep the engine racing at 6,000 rpm when all you’re trying to do is merge or pass a slower car. On back roads, the HR-V is a much calmer, quieter, and altogether nicer car to drive. In Sport mode at these lower speeds, the transmission helps the driver stay in the engine’s ideal power band, and the paddle shifters simulate gear ratios very well, which helps when coasting downhill. Even though the HR-V is not ideal on the highway, the steering tracks dead straight and is unusually composed for such a short-wheelbase car—composure is something the larger Nissan Rogue lacks entirely.

The soft suspension and light steering make the HR-V easy to maneuver and compliant on all surfaces, although it’s not as communicative or engaging as the Civic. Similarly, the brake pedal feels soft. It all makes for a composed, comfortable car, but only if you’re gentle with the throttle. Honda’s turbocharged 1.5-liter four in the CR-V is a superior engine. The HR-V's older engine (from the previous-generation Civic) prevents it from exceeding the larger CR-V’s efficiency and power. Fuel economy is EPA rated at between 25 and 27 mpg city and 31 and 34 mpg highway. Our EX-L is rated at 27/31, and we averaged 25 mpg over 300 miles. 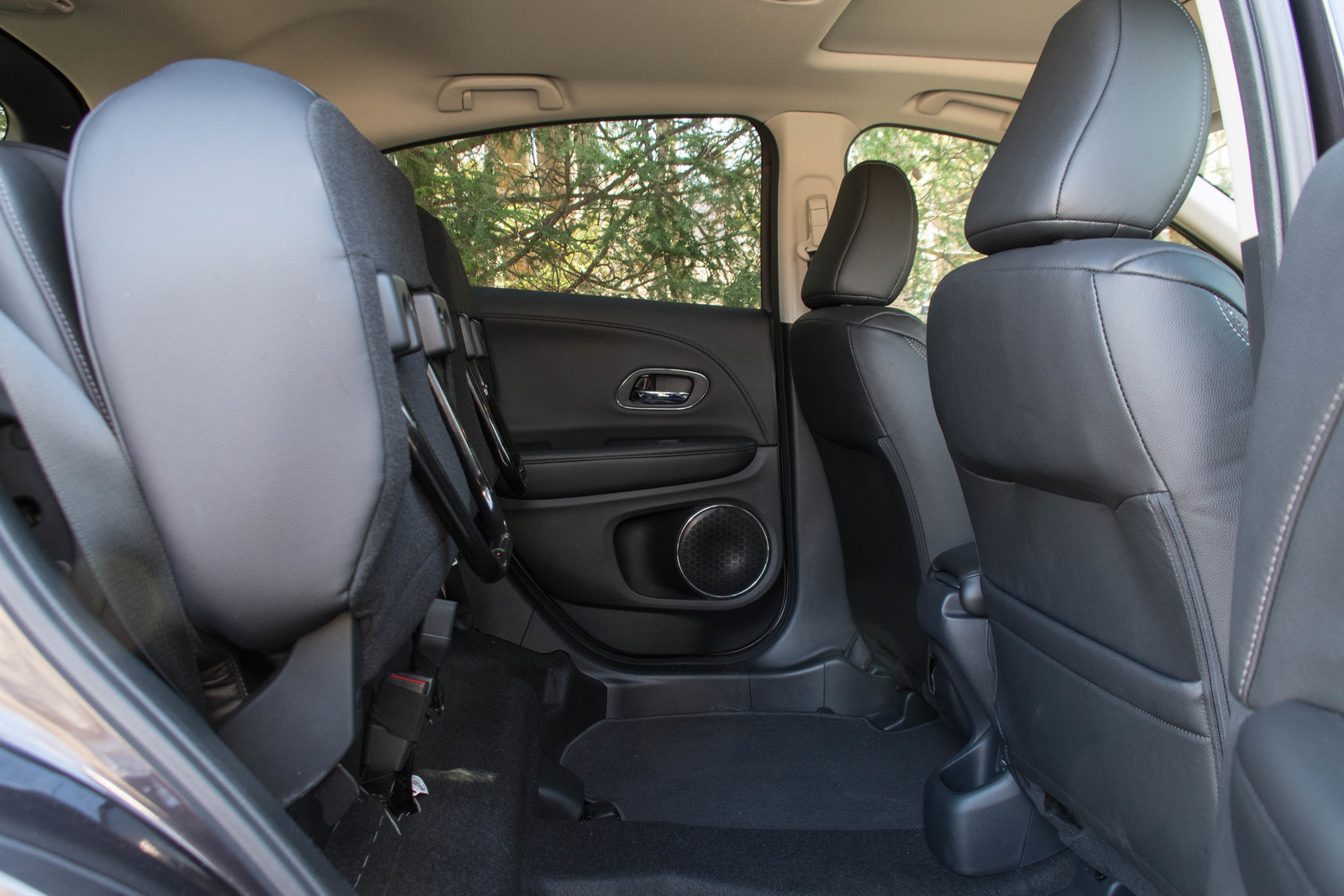 The HR-V might seem tiny, but it offers plenty of cargo space. With the rear seats folded, the HR-V can swallow up to 58.8 cubic feet of stuff, which betters just about every competitor. We loaded an entire drum set, a stool, and an amp with room to spare. Tall or bulky long items can fit beneath the rear seats. The seat rests split, fold upward, and lock against the back rests. Together with a low, flat floor, the HR-V accommodates cargo that otherwise wouldn’t fit in the rear. It’s an extremely versatile little car that makes use of every inch of room. There’s more storage space to connect devices near the driver’s knee via two USB ports, an HDMI port, and a 12-volt power outlet. There are none in the center console, although the center armrest slides forward and the two central cupholders are especially clever; two flaps can secure both shorter and taller drinks. Headroom at the rear is tight, although legroom is spacious. Up front, the HR-V’s clearly marked controls, simple instrument panel, and large side view mirrors make the HR-V especially friendly to new and younger drivers. But the lack of physical controls on the center stack for audio, navigation, and other functions makes it difficult and distracting to adjust them while on the move. On the plus side, these controls are available on the steering wheel, and the touch-sensitive climate controls are intuitive and quick to respond. 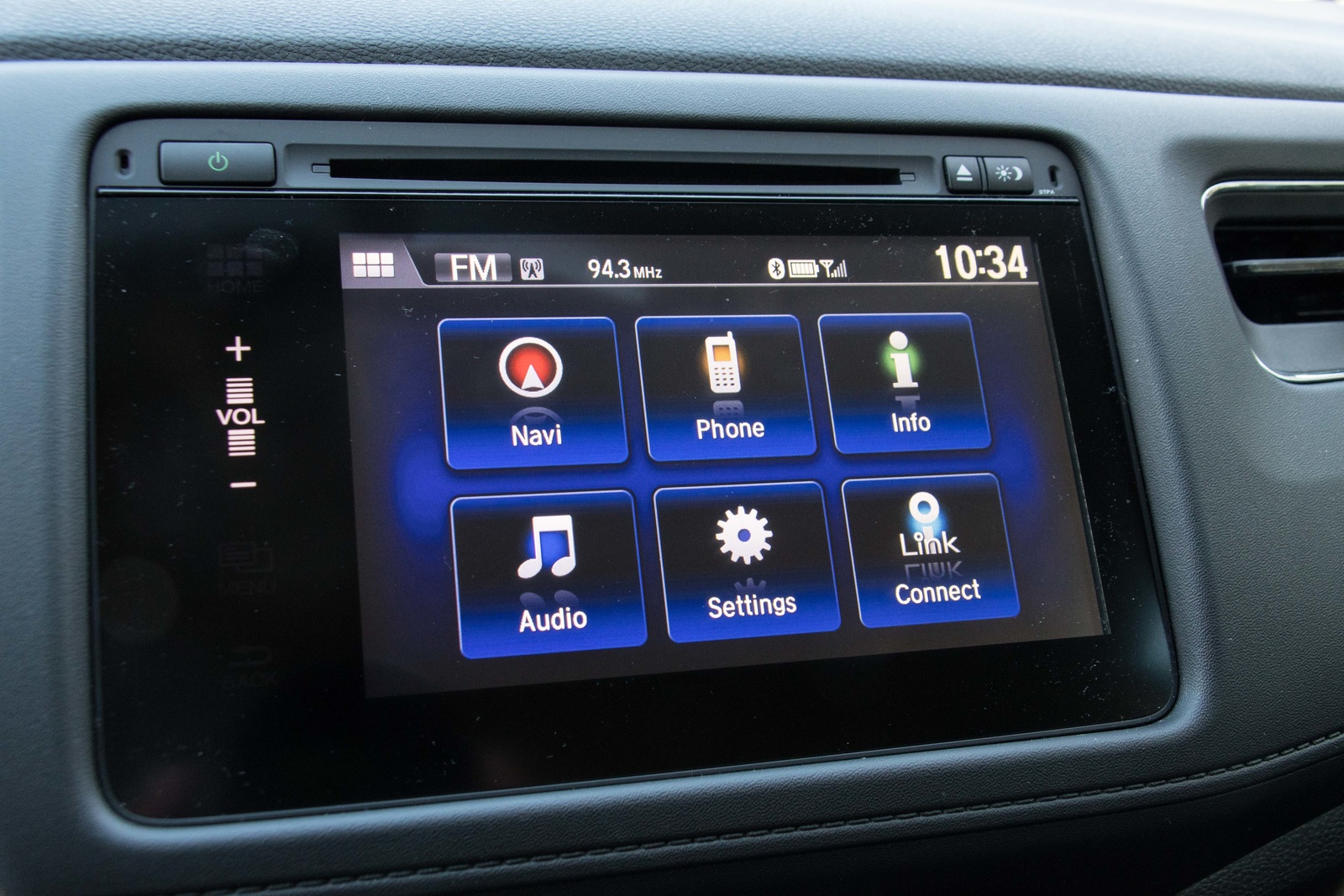 The HR-V has disappointing, dated technology behind Honda’s current models and most competitors. The infotainment system doesn’t support Android Auto or Apple CarPlay, and you’ll wish it did. Response time is slow, the maps are extremely low resolution, and menu layouts for changing settings are confusing and complex. Pandora and Aha radio are available when connected to a paired smartphone with these apps installed, plus SiriusXM and HD Radio come aboard the top trim. Voice recognition is adequate. But try to adjust the volume with Honda’s touch-sensitive slider or switch audio sources. Grief is not even the word to describe it (Honda’s latest system on the 2018 Accord is many times improved). There are no driver assists like adaptive cruise control or lane-keep assist. The EX-L doesn’t come with power seats, a premium stereo, or LED headlights, either. It feels decidedly behind the times at this price point. 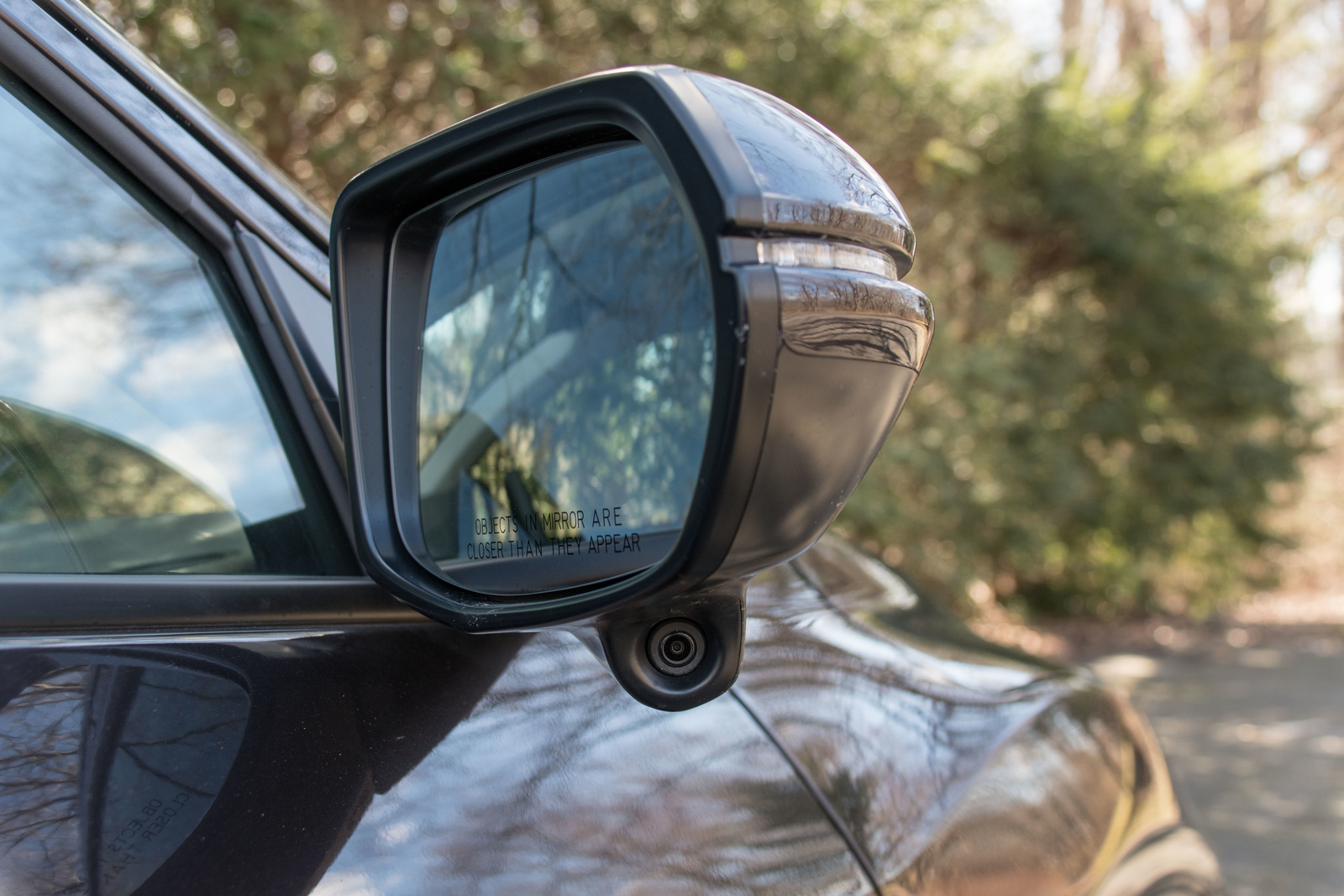 Forward-collision alert, blind-spot monitoring, parking sensors, and other electronic safety features are not available for the HR-V. However, Honda’s standard multi-angle reversing camera and optional LaneWatch, which uses a camera in the right side-view mirror and displays the car’s blind spot on the central screen, are superb. Safety ratings are generally good. The National Highway Traffic Safety Administration (NHTSA) rates the HR-V at 5 stars overall, with 5 stars in side crash tests and 4 stars for frontal crashes. The HR-V scored the top Good rating in four of five crash tests conducted by the Insurance Institute for Highway Safety (IIHS), with an Acceptable rating for front side overlap. Because of that rating—and its lack of forward-collision alert with auto-braking—the HR-V is not a Top Safety Pick. 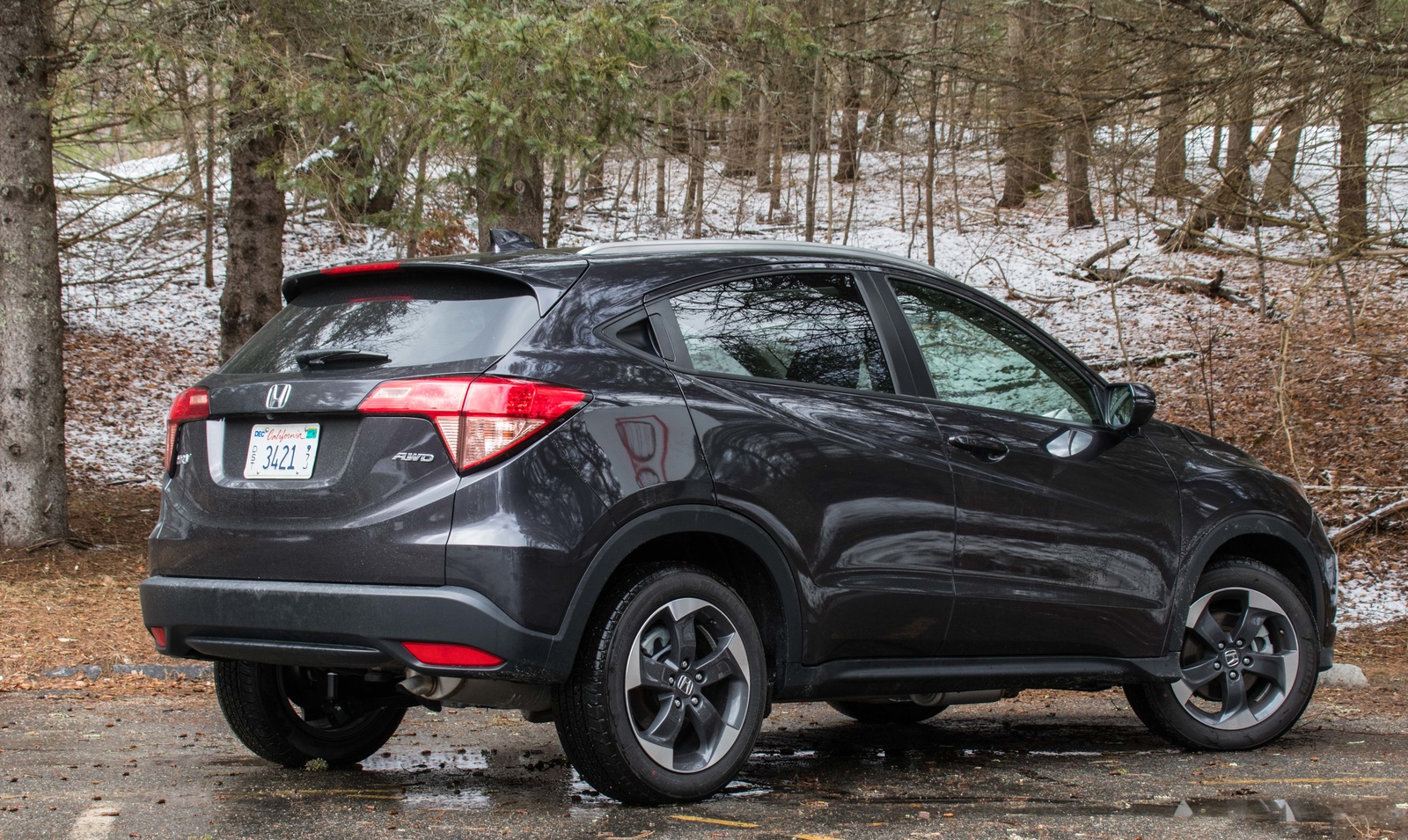 At low starting prices—the FWD LX starts at $19,670 and the FWD EX at $21,270—the HR-V is a well-priced, decently equipped crossover in this segment. But the lack of electronic safety features, the meager 4-cylinder engine, and dated or altogether missing technology put the HR-V a few notches below where Honda models typically score on value. It feels like an older car in need of a refresh, especially when compared to the Jeep Renegade and Mazda CX-3. Our AWD EX-L, at $27,515 with destination, makes it difficult to justify when an AWD CR-V EX is less than $2,000 more. But among subcompact crossovers, despite those stuffed with more features, few are as practical and high in material quality and finish as the HR-V.

Users ranked 2018 Honda HR-V against other cars which they drove/owned. Each ranking was based on 9 categories. Here is the summary of top rankings.

Looking for a Used HR-V in your area?

Are Cars Bought On CarGurus Delivered To The Buyer

When I bought my car my sticker said 34 miles per gallon Highway 27mpg City. I get 23-24mpg city and 26mpg Highway??? Anyone else have this problem?

273 views with 3 answers (last answer about a year ago)

Purchased A Car And Did Not Receive Title Or Registration

I'm Worried That My "after Production Installation" Of Roof Racks Will Not ...

Honda refuses to put racks on the HR-V that we want to buy. Why would the dealership refuse?