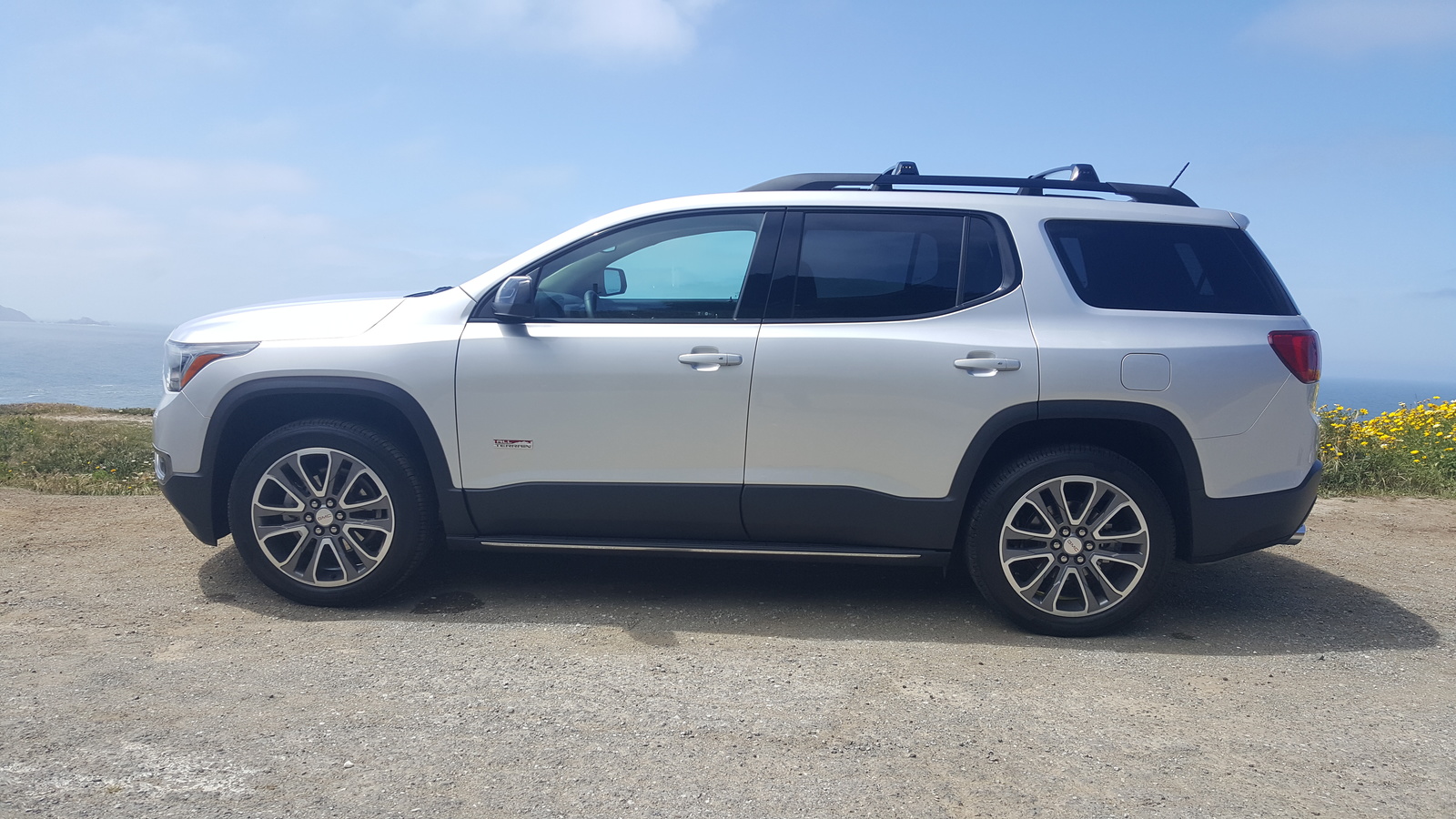 GMC did a number on the Acadia for 2017, stripping it of weight, space, and even some capability. But dropping more than 700 pounds is a good trade for a bit of towing capacity and third-row legroom, thanks to the improved handling, braking, and fuel economy. But despite having dropped all that weight, the 4-cylinder engine proved largely inadequate to its task. Thankfully, the venerable V6 is now available for SLE-1 trims equipped with all-wheel drive. 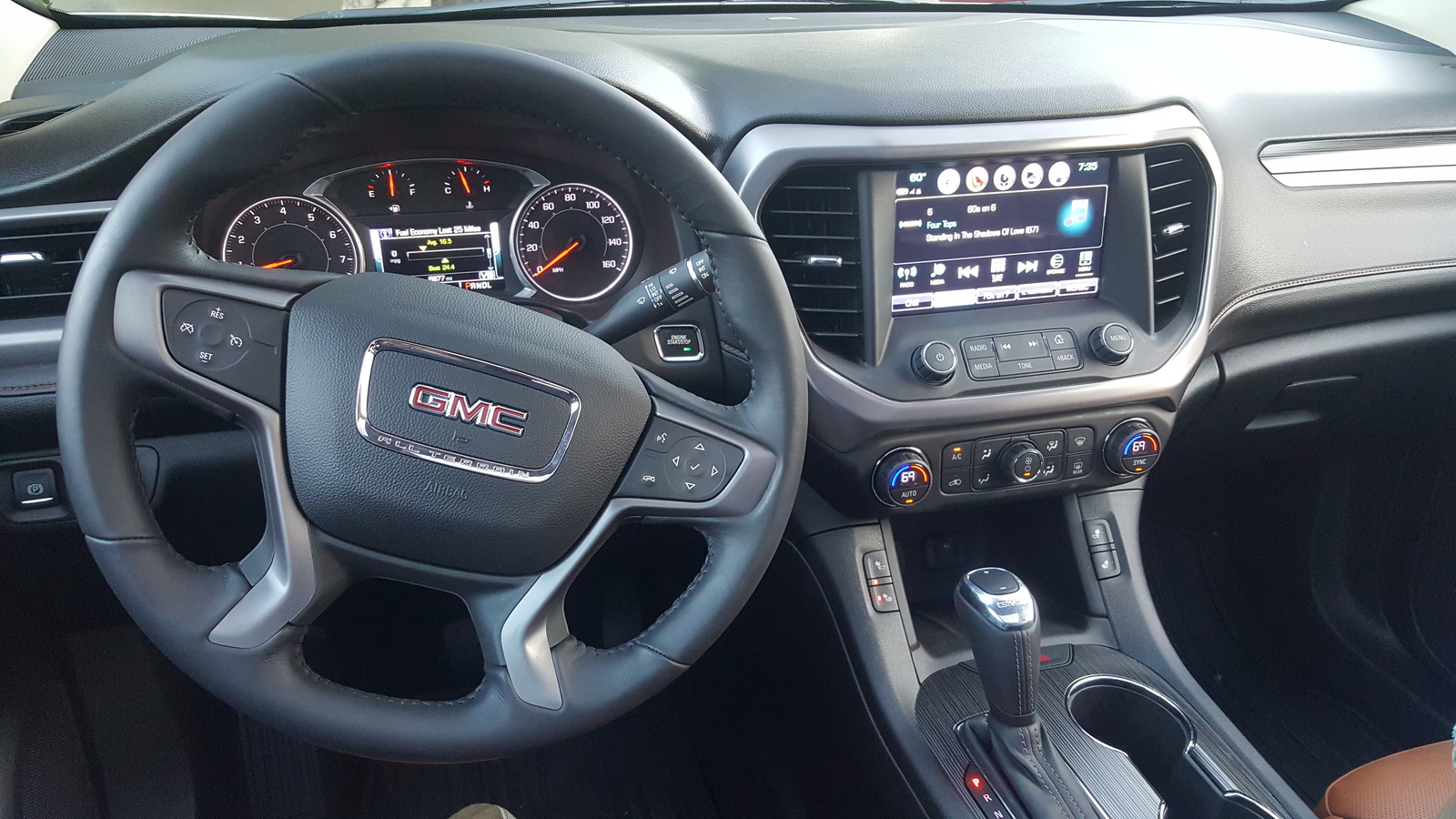 With its svelte new silhouette, the Acadia arrived in 2017 with diminished towing capacity and third-row legroom, trading off a bit of utility for a better ride and fuel economy in a segment where crossovers are expected to perform like cars.

A base MSRP below 30 grand will get you into an SL trim, if you’re willing to order at the dealer and wait for it to be built. With the SL, you’ll have no options with regard to engine or drivetrain, as it comes only with the 2.5-liter 4-cylinder engine and front-wheel drive (FWD), but you’ll still get 17-inch alloys, keyless ignition and entry, tri-zone climate control, and a 7-inch touchscreen with the Intellilink infotainment system, Android Auto and Apple CarPlay, and a 4G LTE Wi-Fi hotspot.

For all-wheel drive (AWD) you’ll have to go with the SLE trim, and doing so unlocks the big upgrade for 2018: the option of the 3.6-liter V6, the same one used in the Camaro. With the SLE1, you get LED running lights and satellite radio, whereas the SLE2 really ups the content with 18-inch alloys, heated power front seats, a power-adjustable liftgate and front fogs, plus roof rails and remote engine start. However, my favorite upgrade here is the inclusion of standard second-row captain’s chairs. You can still opt for the bench if you prefer, but the captain’s chairs make accessing the third row a much more pleasurable affair.

If ultimate luxury is your goal, the Denali gets you an upgraded 8-inch touchscreen with navigation and virtual gauges for the driver, heated and ventilated front seats, a heated power steering wheel, xenon headlights, polished 20-inch wheels, a hands-free liftgate, and a unique grille and badging. That’s an impressive collection of features, but with a starting MSRP over $45,000, you can easily push past 50 with just a couple of clicks in the options menu.

My week with the Acadia was spent in an AWD SLT1 with the newly optional V6 and the All-Terrain package that debuted last year. It’s a $1,800 option that previously mandated you deleting the third row, but that’s not the case for 2018. For your money you’ll get 20-inch wheels, roof rails, hill descent control and an advanced, twin-clutch AWD system. With the V6, the price starts at $41,560 and was increased thanks to the already mentioned All-Terrain Package, a dual-skyscape sunroof ($1,400), cross rails for the roof rack and side steps ($860), a $650 trailering package, navigation ($495), rubber floor mats ($300), a $395 paint job, and a $975 destination charge, bringing the total to $48,435. 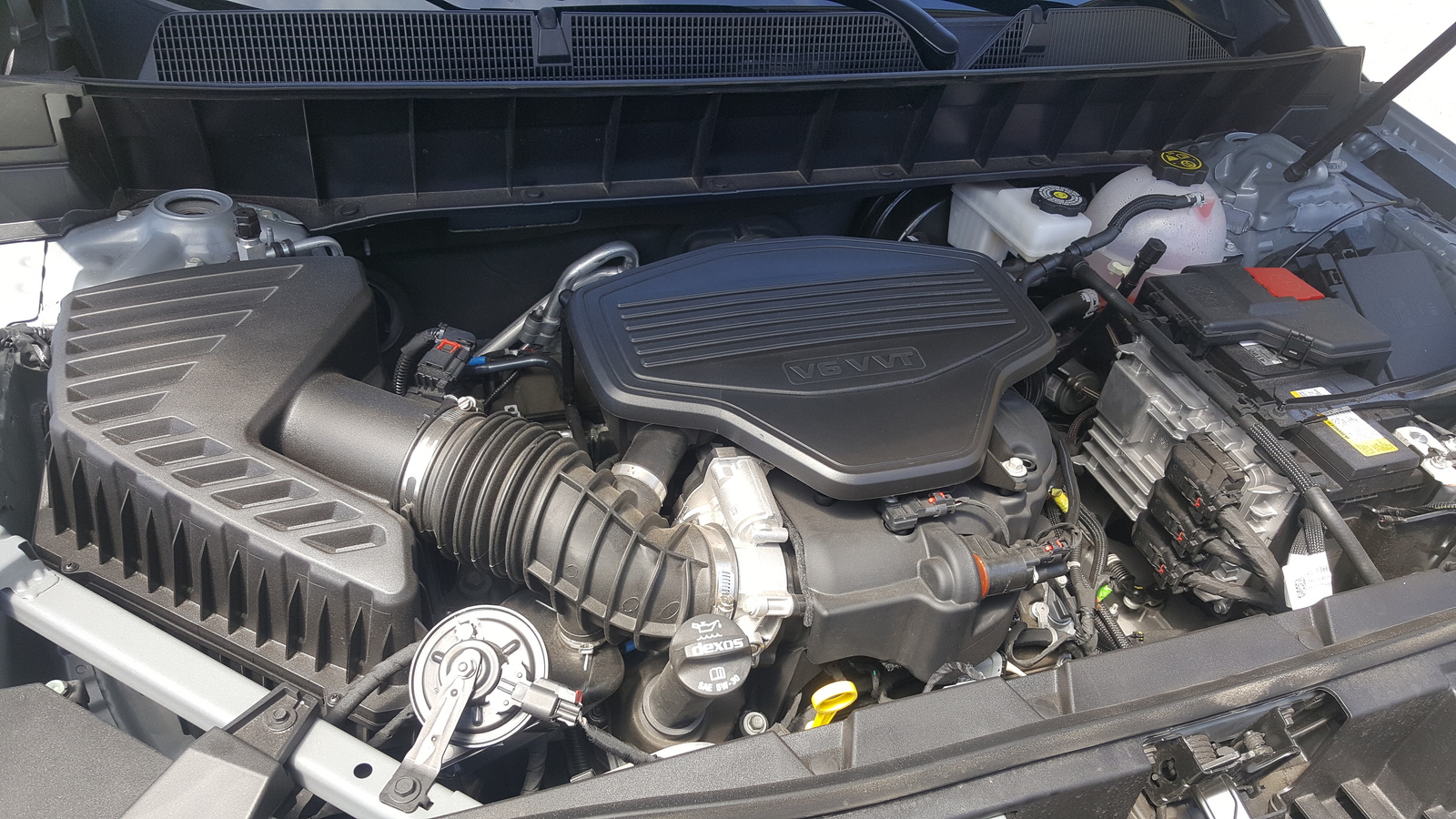 There’s no kind way to say this, but the 2.5-liter engine simply isn’t up to the task in the Acadia if you’re considering anything other than commuter duty. With 193 horsepower and 188 pound-feet of torque, it takes more than 9 seconds to hit 60 mph and can deliver only 21 mpg city and 26 highway. If you’re considering any type of towing or hauling, or have more than two small children, you should definitely consider upgrading to the V6. Thankfully, you don’t have to climb too high in the trim ladder to gain access anymore.

The 3.6-liter V6 is seeing a lot of duty in GM’s world. It’s shown up in everything from the Colorado to the Regal GS and lends a hand to no fewer than 4 Cadillacs in the process. Here it delivers 310 hp and 271 lb-ft of torque and offers 17 mpg city, 25 highway, 20 combined while still hitting 60 mph in just over 6 seconds. It’s a strong, eager engine that is more than up to the task of motivating the Acadia.

The big downside here is that both engines are mated to the old 6-speed transmission, which exhibits lurchy character at low speeds and sluggish shifting at highway speeds. 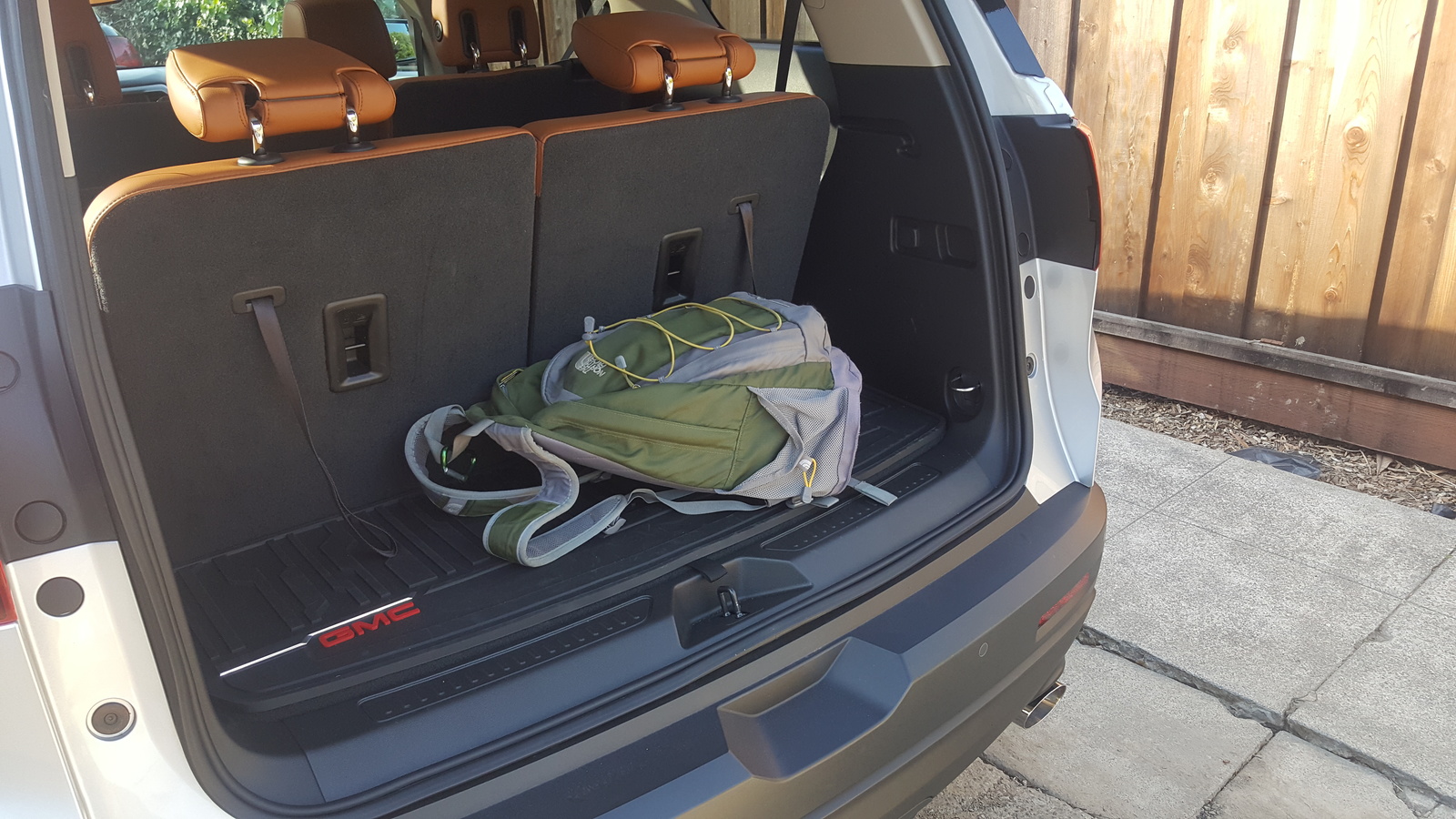 The Acadia is deceptively easy to park and drive with its new body, and if you go with the adaptive suspension that’s available in the SLT2 and up, it actually borders on nimble. The more aggressive, twin-clutch AWD system you get with the All-Terrain package pushes this even further, although it’s limited by the curious decision of forcing it to live with 20-inch wheels.

If space and towing capacity are of prime importance in your buying decision, the Acadia may disappoint, however. Maximum towing capacity is 4,000 pounds, a drop of 1,200 pounds from 2016, and 4-cylinder Acadias with FWD top out at 1,000. Similarly, interior space isn’t exactly class-leading with 12.8 cubic feet in the trunk and 79 total with the seats flat, both substantial downgrades from the previous generation. But up front and in the second row, there’s space to spare. Looking at the numbers alone may cause you to disregard the Acadia outright, but this was a deliberate move by GM to focus on passenger comfort up front, so take a look before you decide.

My main concern here is with visibility. Poor visibility is bad enough in any car, but in a vehicle specifically designed to haul around a family, it deserves extra attention. Here, thick A-pillars make turns a trick affair, and the newly sculpted “hump” beneath the C-pillar offers its own unique obstruction to the rear. Check the video for a demonstration of how little visibility there is from the driver’s seat to the rear corners. 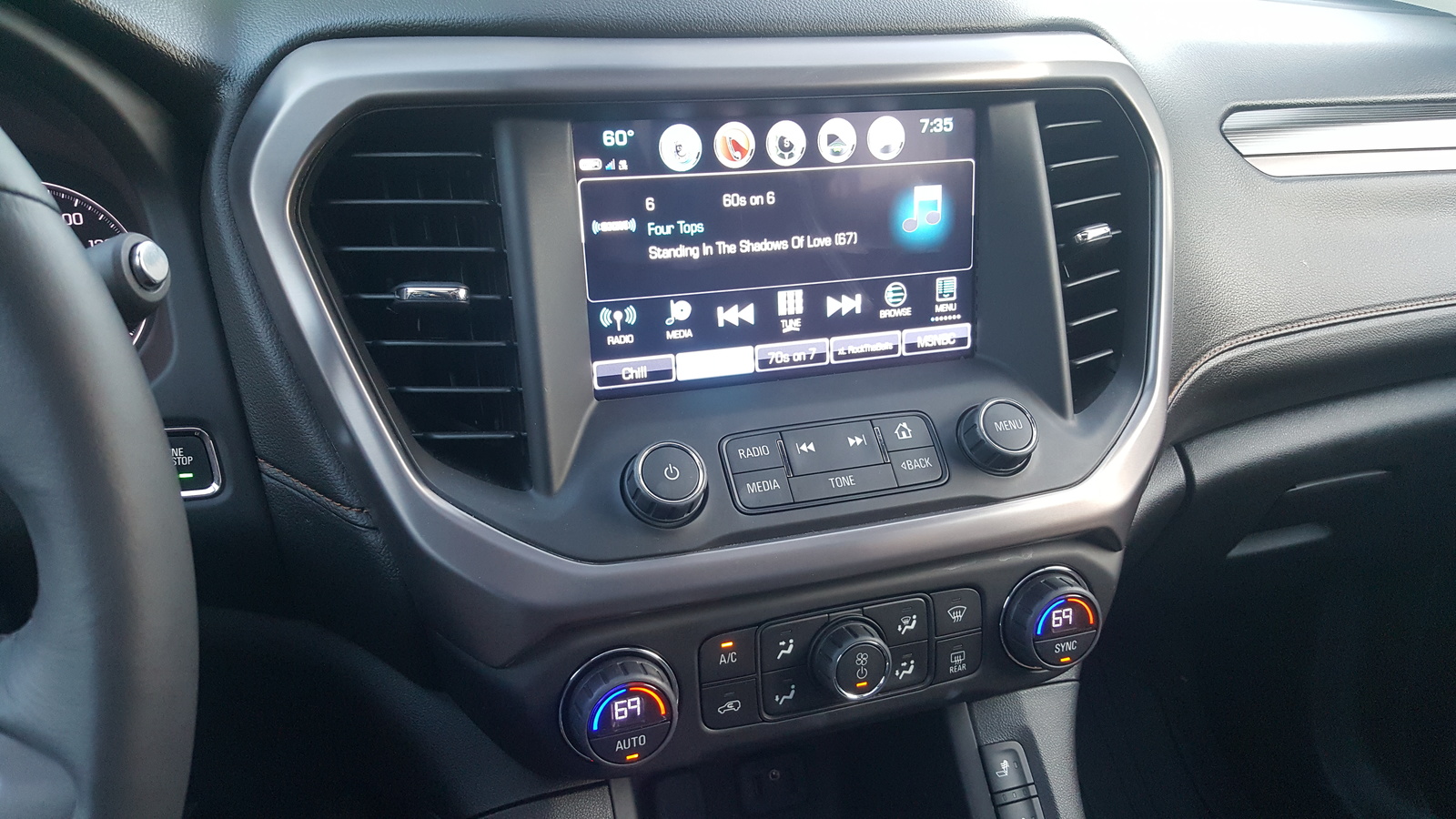 GM deserves special praise for taking a vehicle like the sub-$30,000 SL trim and fitting it with featues like tri-zone auto climate control, keyless ignition and entry, heated mirrors, a 4G Wi-Fi hotspot and Android Auto/Apple CarPlay. Couple that with the standard Intellilink system borrowed from Buick’s stable, and you’re not left behind even if you go for the base trim. Spend a bit more money, and the virtual gauges, larger touchscreen, and upgraded driver’s display from the Denali are all very nice improvements to an already competent system.

Safety tech is well sorted, too, with the SLT1 offering the Driver Alert I package for blind-spot monitoring, lane-departure warning, rear cross-traffic alert, and rear parking sensors, and the SLT2’s Driver Alert II package adding lane-keep assist, auto high beams, front parking sensors and a low-speed forward-collision warning and auto braking. But again, this is a family vehicle, and those systems should be available no matter the trim. The worst example of this is the Denali-only adaptive cruise with full-speed auto braking. Safety shouldn’t be a luxury. 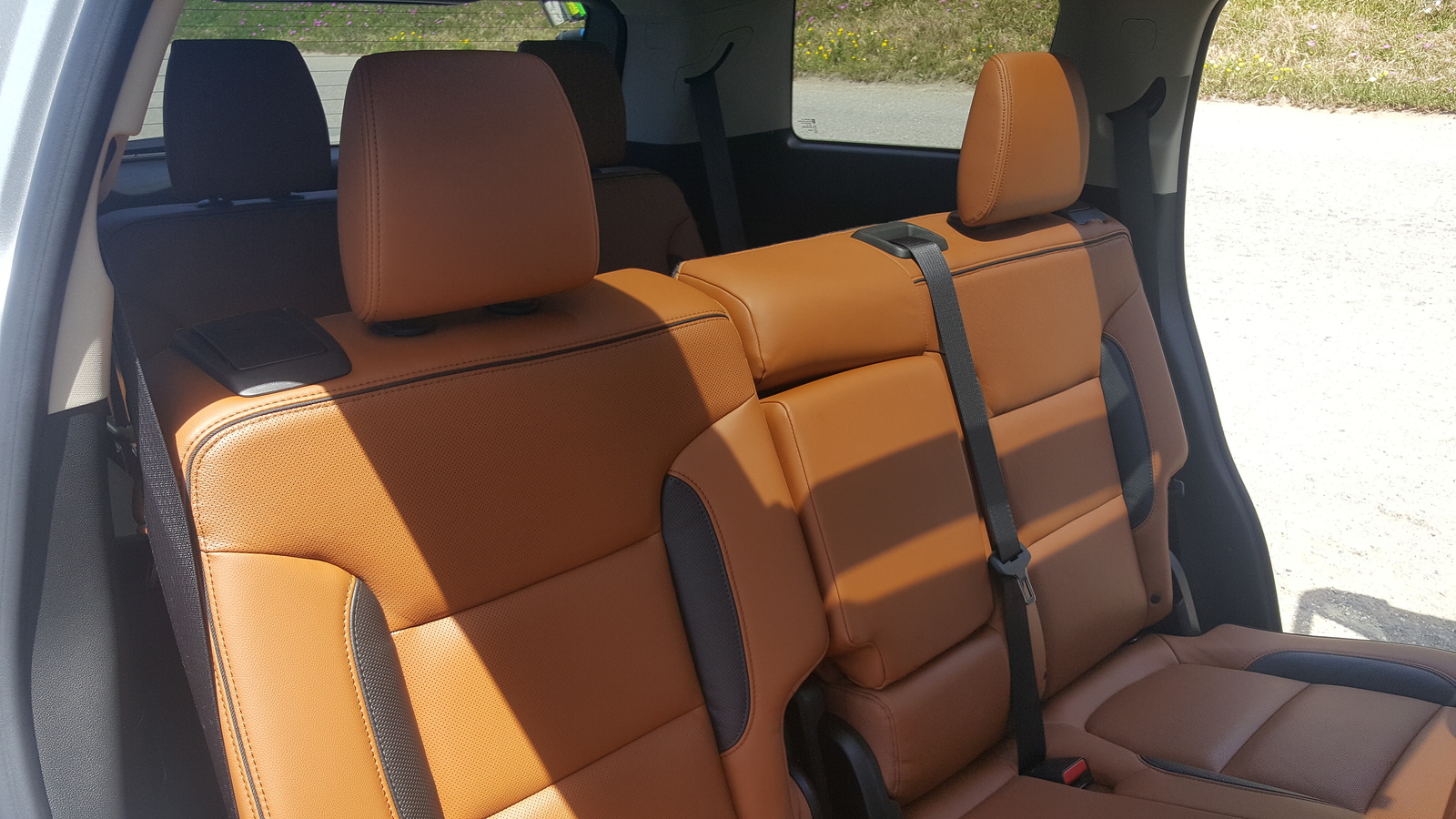 Last year, the Acadia was named a Top Safety Pick by the independent Insurance Institute for Highway Safety (IIHS), but only when equipped with the Driver Alert II package mentioned above. This is despite it dropping its perfect safety rating from the government’s National Highway Traffic Safety Administration (NHTSA). While the Acadia does still have a 5-star rating in frontal collision tests, all other tests scored 4 stars.

Beyond the Driver Alert packages, the Acadia comes with standard 4-wheel antilock disk brakes, traction and stability control as well as a full suite of airbags including front, side and full-length curtain bags, plus driver’s knee and inboard driver’s seat bags. You’ll also get GM’s Teen Driver technology that allows you to set and monitor limits for younger drivers, with real-time reporting of violations of those limits. 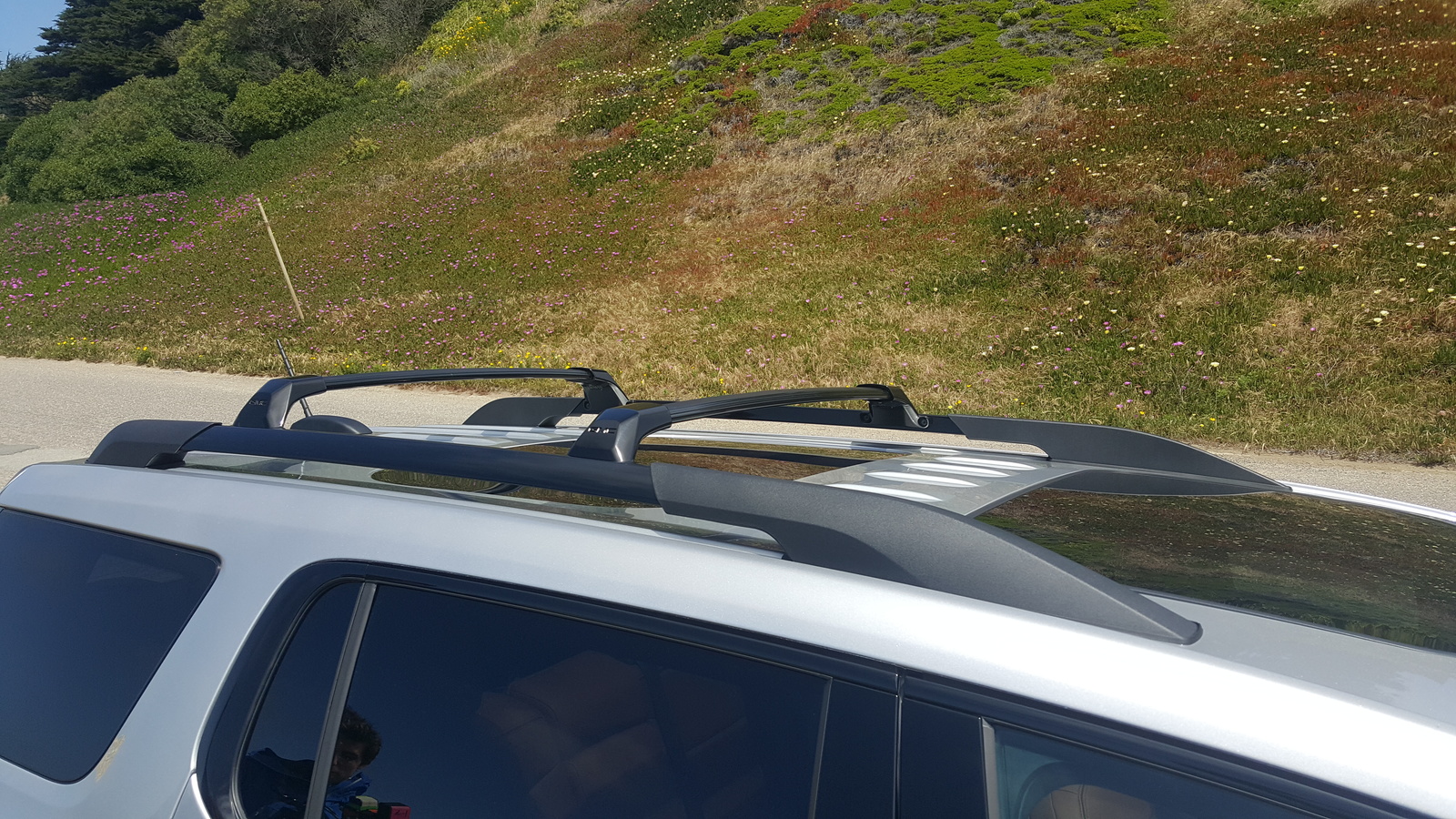 The Acadia ranges from surprisingly affordable in SL and SLE trims to shockingly dear when you get into Denali territory. But with the V6 now available to SLT1 trims, a lot of extra versatility has been added to the lineup. Currently the 6-speed transmission is what truly holds the Acadia back, enough that I’d caution prospective buyers to wait a bit to see when GM intends to upgrade. Meanwhile, the segment has diversified enough that you can decide what’s most important to you—towing capacity, interior space, or ride—and choose an option that best suits your life and needs.

Guru5DGP2 Does Acadia have outside keypad

Users ranked 2018 GMC Acadia against other cars which they drove/owned. Each ranking was based on 9 categories. Here is the summary of top rankings.

Have you driven a 2018 GMC Acadia?
Rank This Car

I have had my 2018 GMC Acadia for a month now and about a 1000 miles. Has anyone had an issue like this? I will be at a stop light with my foot on the brake and the light turns green and I let my f...

My battery went dead today and it’s a 2018 but after I jumped it off the driver display changed. How can I get it back to the display it had when I bought it?

Drove my Acadia to the post office yesterday and it ran fine. Today when I went out, it won’t even turn over. Don’t think it’s a dead battery as the screen tells me to service several different th...

283 views with 1 answer (last answer about a year ago)

I had a 2012 Toyota Highlander which I really liked. I was hit on driver's side and front fender and then hit a pole. I only came out with only a bruised left arm and bruised right lower leg. Onl...

HOW DO I FIND VEHICLES WITH DIESEL ENGINES?

How do I find vehicles with Diesel engines.