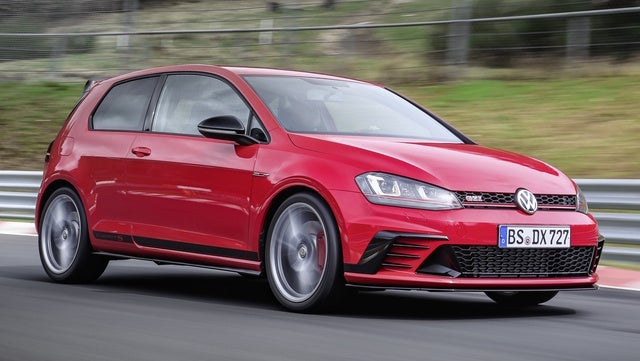 For 2017, Volkswagen shuffles the Golf GTI's lineup, dropping a 2-door trim and adding a new 4-door trim, while beefing up some of the hatchback's safety features and optional packages. Offering better performance than the standard Golfs but not quite the stellar heights achieved by the Golf R, the GTI slots into a comfortable middle ground, staking out its own space as an affordable sporty hatchback. And buyers are responding well, making the GTI the best-selling Golf currently available, no doubt due to its winning combination of performance, handling, comfort, refinement, practicality, and overall value.

Like the rest of the Golf lineup, the GTI should see a mid-generation refresh in 2018, so the upgrades for 2017 are limited. VW fills the gap with the introduction of its new well-equipped 4-door GTI Sport trim, which slots into the lineup above the entry-level S and SE trims but under the top-of-the-line Autobahn. As its name implies, it comes equipped with a number of sport-oriented features. Performance brakes borrowed from the high-performance Golf R, for instance, come standard, along with a torque-sensing limited-slip differential, 18-inch Nogaro aluminum-alloy wheels, and HID headlights with LED daytime running lights. And just for fun, VW boosts the output of the GTI Sport's 4-cylinder turbocharged powerplant by 10 hp, to 220 hp. VW also adds a few finishing touches, like unique floormats, push-button start, and black mirror caps.

VW continues to offer the GTI in both 2- and 4-door hatchback body styles for 2017, although it's reducing the 2-door GTI to a single S trim, while the 4-door GTI comes in S, SE, and Autobahn trim levels, as well as the new Sport. While VW no longer offers its optional Performance Package for 2- or 4-door S trims, the package now comes standard on the 4-door SE and Autobahn trims. It adds such features as larger-diameter performance brakes and the limited-slip differential and, as in the new Sport trim, it boosts engine output by 10 hp, to 220 hp.

A turbocharged 2.0-liter TSI 4-cylinder engine drives all Golf GTIs. In its base configuration on the S trims, it delivers 210 hp and up to 250 lb-ft of torque. In all Golfs, the engine links to either a 6-speed manual transmission or an optional 6-speed DSG dual-clutch automatic transmission with Sport and Tiptronic manual-shift modes. Fuel-economy numbers for all trims check in at 25 mpg city/33 highway/28 combined with the manual transmission and 25/34/28 with the automatic.

One of the GTI's strongest attributes remains its sporty handling and overall fun-to-drive appeal. With peak torque kicking in at a relatively low 1,500 rpm and staying strong during acceleration, the GTI zips off the starting line and quickly reaches highway speeds, hitting 60 mph in 5.8 seconds. That's not quite as good as the Golf R's 4.5 seconds but a noticeable improvement over the standard Golf's time of around 8.4 seconds.

The GTI's sport suspension features MacPherson struts in the front and an independent multi-link setup in the rear, with beefed-up anti-roll bars in both the front and rear. VW equips all GTIs with its XDS Cross Differential System, which helps keep the car on track in tight curves and under heavy acceleration, and the Performance Package adds the torque-sensing limited-slip differential, which also improves handling under aggressive driving maneuvers and hard acceleration. As a result, the GTI hugs the curves and rarely veers off in the wrong direction, even when pushed to its limits. All trims get 18-inch wheels as standard equipment, which add to the stability equation and help keep the hatchback firmly planted.

Outside, VW dresses up the GTI's exterior design with a number of sport upgrades, like sport side skirts, red brake calipers, a rear spoiler, and a black front grille with a honeycomb mesh and red accents. The GTI sits lower than the standard Golf by .4 inches, so it has a sleeker, more poised look. LED foglights and heated side mirrors are among the other standard exterior features.

The cabin gets a sport upgrade as well over the standard Golf, with features like well-bolstered sport front seats, Clark Plaid upholstery, a leather-wrapped sport steering wheel, brushed aluminum pedals, and a leather-wrapped shift knob. The 5-passenger cabin provides decent legroom in the front and back, and plenty of storage spaces, adding function to its sportiness. Tech features include an 8-speaker touchscreen sound system with satellite radio, a rear-view camera, and VW's Car-Net connectivity system with Apple and Android smartphone app integration. The SE adds features like a panoramic sunroof, leather upholstery, heated front seats, push-button start, and a Fender premium audio system, while the Autobahn also gets dual-zone climate control and adaptive cruise control.

All GTIs come well equipped with the standard safety features, like electronic stability control and brake assist, as well as a full range of airbags. The 2016 Golf was named a Top Safety Pick by the Insurance Institute for Highway Safety, which will no doubt carry over to the 2017 GTI.

What's your take on the 2017 Volkswagen Golf GTI?

atlvwgti Great car but the DSG transmission simply does not cruise in traffic, forcing you to push on the gas just to roll a few feet. Using the paddle shifters might be better in that case.

Users ranked 2017 Volkswagen Golf GTI against other cars which they drove/owned. Each ranking was based on 9 categories. Here is the summary of top rankings.

Have you driven a 2017 Volkswagen Golf GTI?
Rank This Car

My Listing Is In Processing Mode Please Help.

I Want To Add A Review, However Cargurus States "no Verified Emails Found. ...

I've called dealer twice. I am unable to leave a review because cargurus says I haven't contacted them

How Does Car Gurus Determine Average Price Paid? And Is It Accurate Enough...

How Is Average Price Paid Determined