The Toyota 86 shows up as the replacement for the now-retired Scion FR-S with some small tweaks to make it even better. But will those minuscule changes be enough to silence the ever-present critics of what might be the best driver’s car on the road?

If a little is good, more must be better. That’s the standard American recipe for success, but the FR-S/BRZ/86 formula has followed a different set of directions, opting for low weight and approachable limits as the main factors for fun. Why else would you fit low-rolling-resistance tires to a sports car? For 2017’s debut of the “new” 86, Toyota added some power; revised steering, suspension, and transmission; and tweaked the looks, hoping some small changes would add up to a big difference. 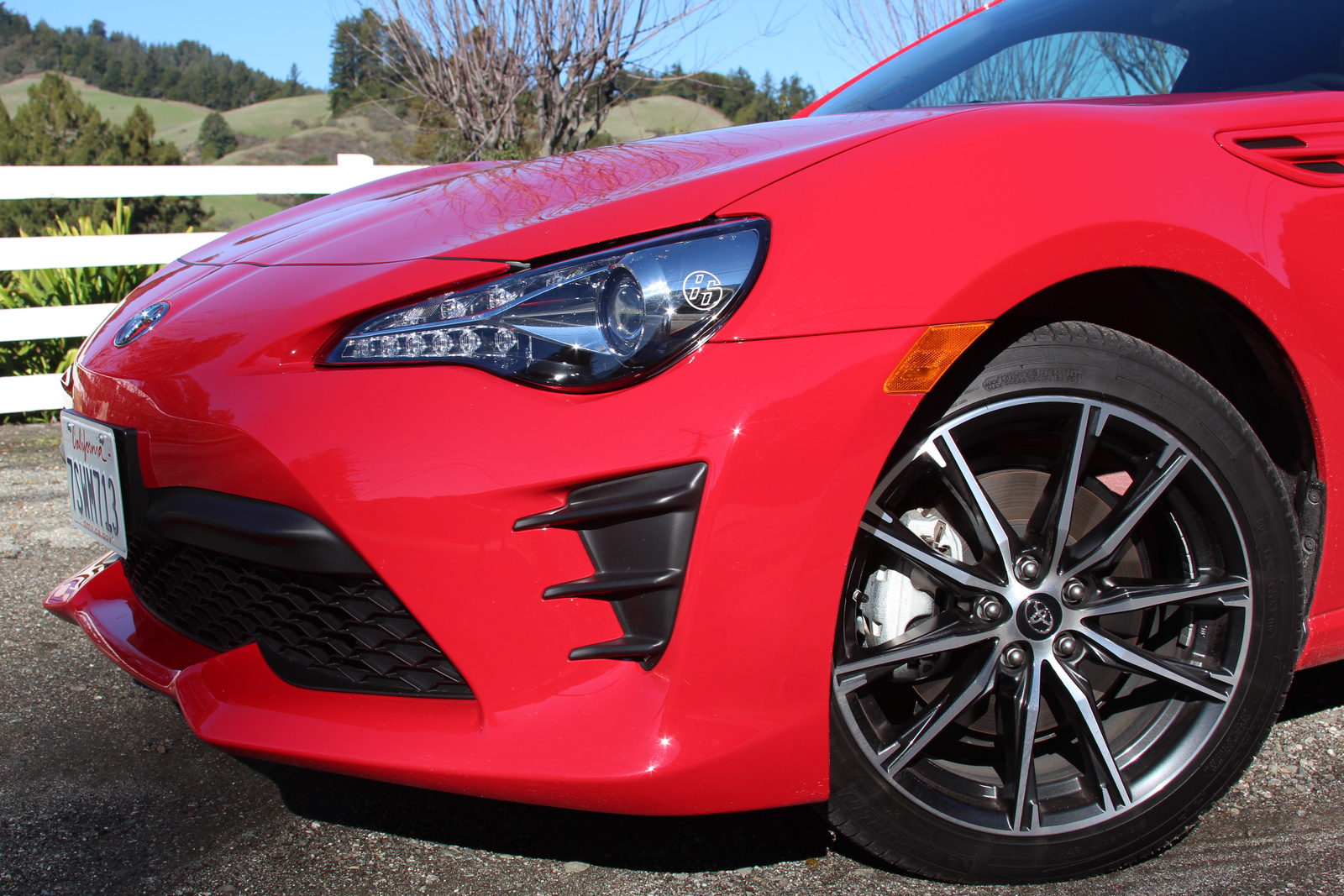 Looks like a new car, feels like an old car. That sort of thinking permeates every inch of the 86, from its light curb weight of less than 2,800 pounds to its approachable limits to its interior—things feel very familiar in the 86, in the best of ways.

From the outside, you’d never know. Its proportions are the traditional long hood/short deck layout with very classic lines. Take a walk around and you’ll be able to pick out elements of sports cars from several decades, and that’s retro done right. Inside it’s a straight slice of old AE86 Corolla, which has turned a lot of potential shoppers off. If you’re not already familiar with that history, you’ll just wonder why the interior looks a few decades old, leaving me to wonder why Toyota didn’t lean a little harder into that in marketing efforts.

But things are slightly “new” for this mid-cycle refresh/fresh model debut. The front and rear fascias have been reworked for improved aerodynamics, with a larger intake up front and a more aggressive splitter out back. LEDs now grace both ends as well, something that works hard to keep the 86 looking modern. And you’ll have trouble forgetting those numbers, as the 86 logo is peppered throughout the car. Fenders, steering wheel, glovebox, floormats, and more all get the 86 treatment, and it’s a stylish little logo.

Keeping with the Scion format, the 86 comes in just one trim and just one price: $26,255. There are no packages or headlining features here, just a few options at reasonable prices. Make the LED affair a threesome and you’ll add $600 for some new foglights, mudguards will keep the rocks off your quarterpanels for $85, and if you want to toss navigation into the mix, it’ll be $900. If you want to spoil the clean rear end, you can tack on a rear spoiler for $400 as well. Beyond that, it’s the TRD parts catalog, but even if you go full throttle and check every option off the list—lowering springs, sports intake & exhaust, sway bars, brakes, and a quick shift kit—you still won’t crack $30,000. But if you're feeling flush, why not go for the $1,650 forged aluminum wheels, since they’ll push you just past 30k?

Toyota gave me a base model with no frills or add-ons for my week with the 86, covered in a classic red paint titled "Ablaze." With the $865 delivery fee, its final drive-away cost was $27,120. 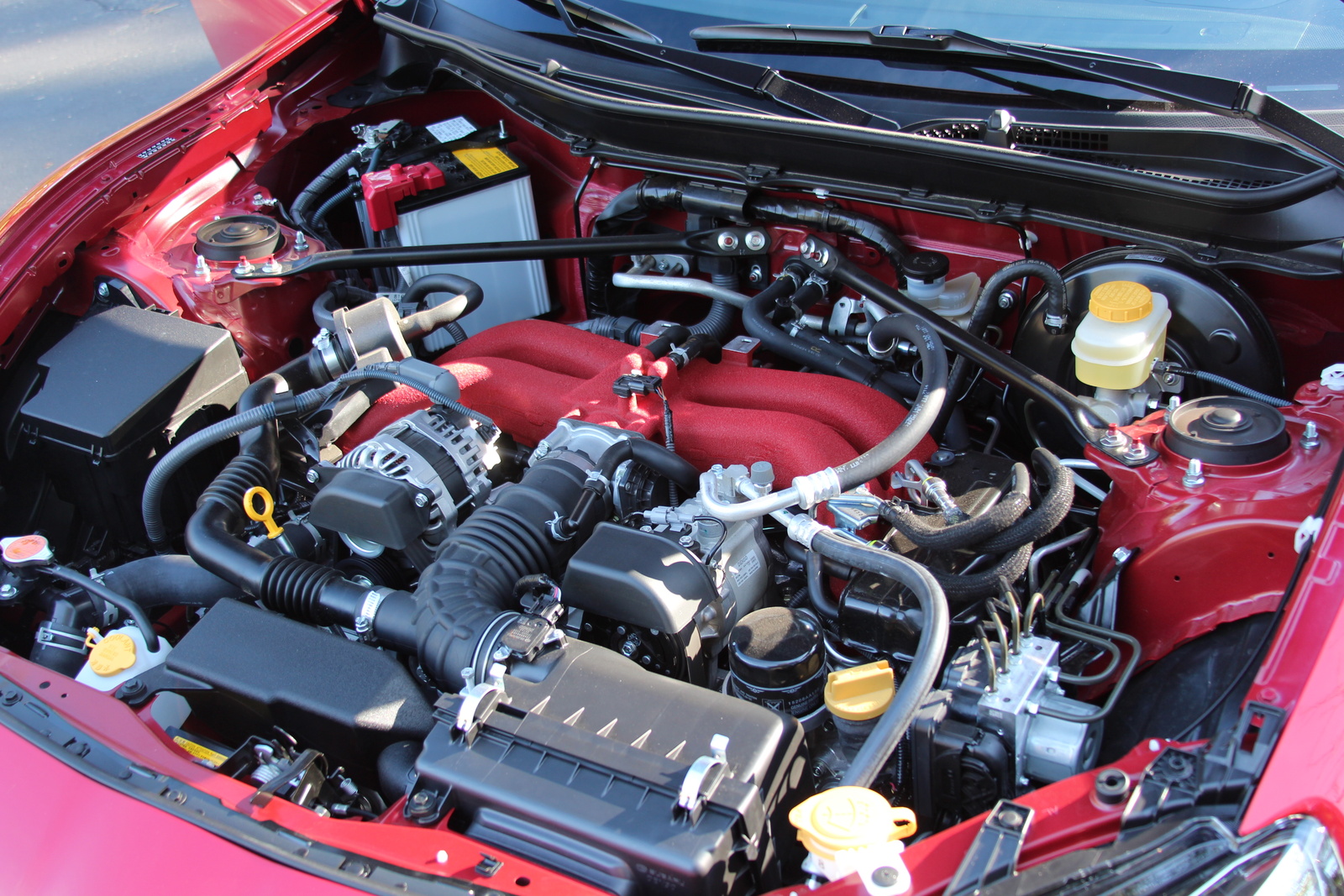 That singular focus continues under the hood, as there’s just one engine available here, a horizontally opposed, 4-cylinder, 2.0-liter, DOHC “boxer” engine. This is where the Subaru part of the partnership shows, although in the name of cooperation, it’s Toyota who put it together.

Despite being perceived as a simple badge switch—Scion to Toyota—there actually have been some slight adjustments here that Toyota hopes will add up to some big changes. Most notably in the face of near-constant calls for more power, buyers who choose the 6-speed manual over the automatic will be greeted with a mostly symbolic 5 extra horses and lb-ft, bringing totals to 205 hp and 156 lb-ft, thanks to some intake and exhaust tuning as well as some internal upgrades. Perhaps more importantly, it also resulted in a more aggressive tone front and back. Regardless, improvement is improvement.

The bigger change comes to the rear gearing. Final drive ratio now stands at 4.3, changed from a 4.1 setup previously. What does this mean? This seemingly small change will produce an increase in torque at all throttle positions, running you through the rev range more rapidly. Why didn’t they do this before? With the 4.1 ratio, 60 mph can be hit at the end of second gear, while with the 4.3, it’s going to take an additional gear change up to third in order to hit 60. This doesn’t sound like much, but with the all-important 60 time, every tenth of a second counts. It’s a good reference point for people, something that everyone has heard of, and lower scores look better on spec sheets and comparison charts. But with this new 4.3, the 86 drives better overall. It’s got more initial oomph and skates through that notorious dead spot in the powerband faster, even if fuel economy suffers here as a result.

With the manual, you can expect 21 mpg city and 28 highway, for a combined rating of 24—something I achieved without effort, despite miles of flogging on back roads and hours stuck in traffic. The automatic does better at 24/32 for 27 combined, but it also takes an extra 2 seconds to get to 60 and robs at least half of the fun of driving the 86.

The other half is, of course, the handling. That’s been tweaked this year as well. The front brace is stiffer, and the rear sway bar is 1mm thicker, while front springs increase stiffness by 10% with the rear showing up 15% softer. It may sound like some of these changes cancel each other out, but suspension tuning is delicate cheese and these changes are designed to deliver predictable weight transfer during back-to-back curves. It works. But the chassis received some attention as well, with extra welds on the C-pillar and stiffening plates in the wheel arches. Again, little details hoping for a big difference.

Finally, the stability-control system was programmed more permissively for 2017, allowing you to swing that tail out during a turn and hold it longer. Given that this is such an important part of the 86’s appeal, this is certainly a good thing, even if it won’t get you to the finish line any faster. With the suspension changes, this means it's more difficult to get the rear to break loose with the 86, but it'll hang longer once it goes before the stability control intervenes. 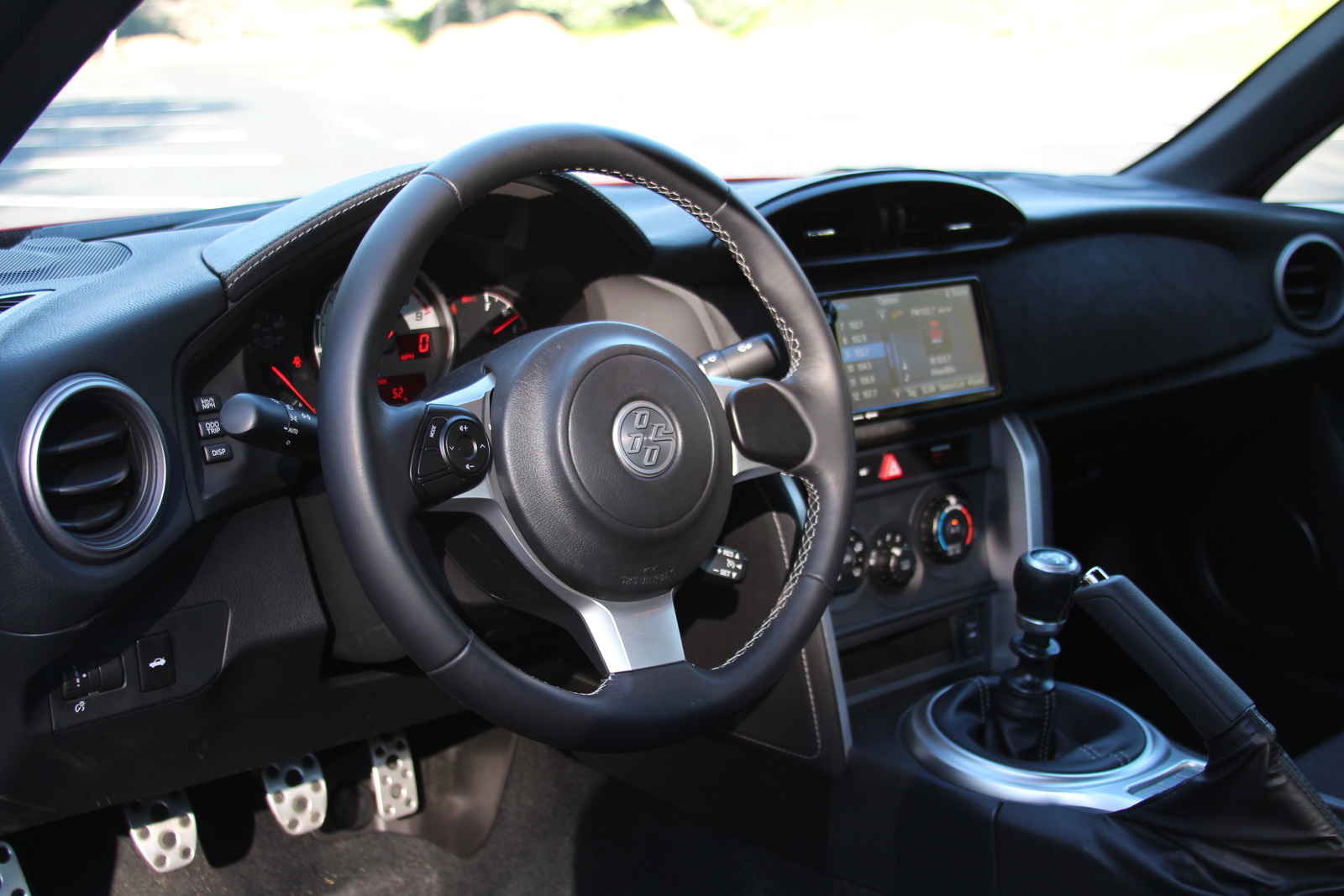 With classic sports-car form and an unequivocally singular function, the 86 is about as close to a livable track car as you can buy right now, and definitely at this price. If you’re looking for much more than an engaging ride, you’re likely to be disappointed. The rear seats are largely symbolic, good for children, dogs, and inanimate objects. There’s a trunk, and while the opening makes it deceptively accessible, it still stands at just 6.9 cubic feet. Toyota brochures claim dropping the rear seats will allow you to fit an extra set of wheels and tires for a track day, and I’ve seen the real-world proof. That’s function.

The tiny steering wheel, apparently the smallest ever on a production Toyota, offers precise input with not a small amount of feedback, a nice surprise in an electric setup. And while the spartan interior is definitely a drawback for some, simple controls can be operated with helmet and gloves still in place. Front seat space is more than adequate, and spending all day in the car provided no issues for my 6-foot, 4-inch frame, although I admit the seats were seemingly designed for someone slightly smaller than myself. Aggressive bolstering just wasn’t wide enough for my upper body, and any lumbar support simply fell in the wrong place for me. I suspect people 6 feet and below would have no issues, though.

The 86 got some interior changes for this year, in the form of those 86 logos peppered throughout and an alcantara treatment on the doors and glovebox area. Simple and effective. If Toyota kept the same theme and styling but just improved some materials slightly—most notably the metal-painted plastic, the generic-looking controls, and the LCD info screens—it would achieve that elusive “small changes for a big difference” it probably wanted. 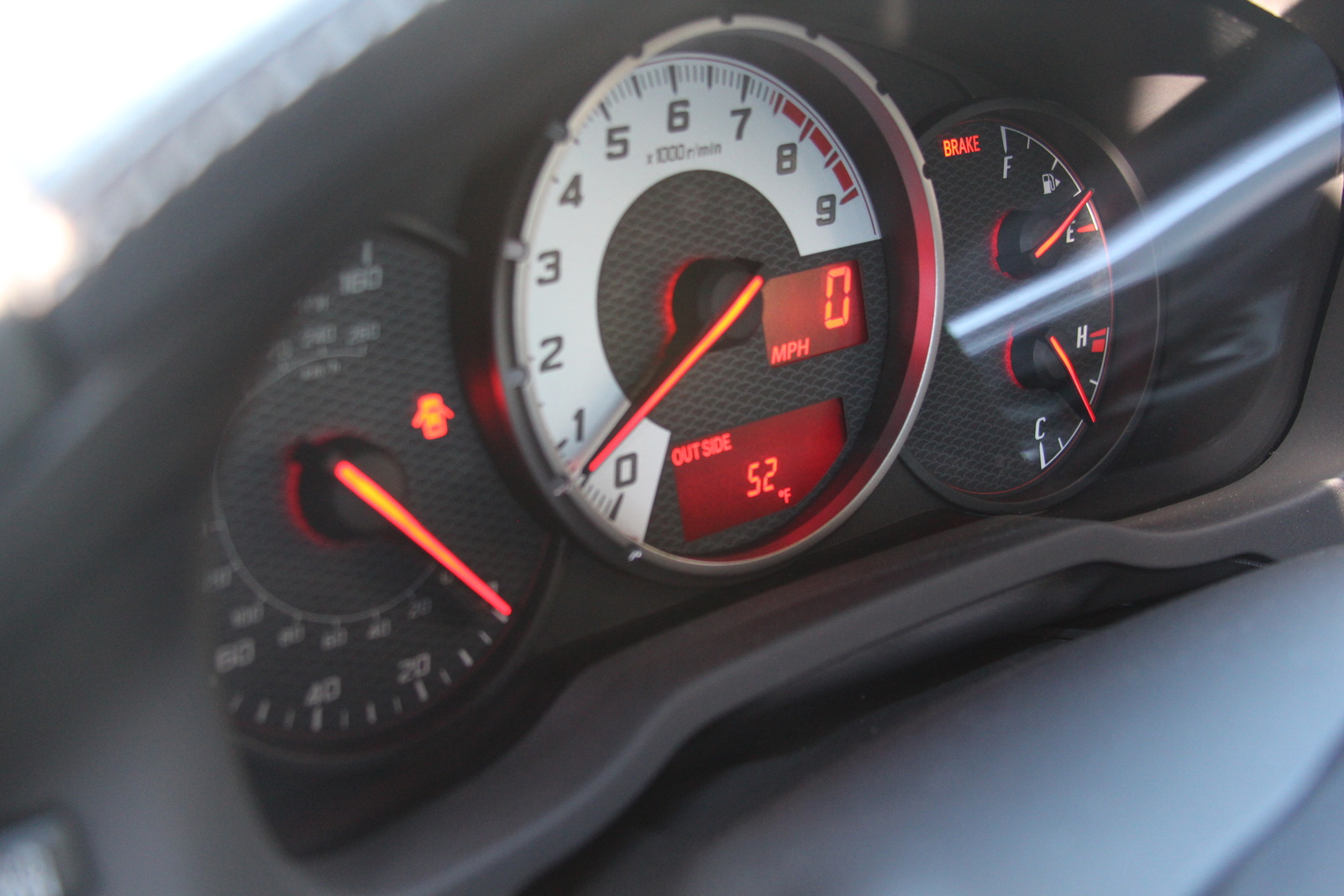 The new 86 offers not a lot to report on here. It has no dual-zone auto climate control, blind-spot monitoring, lane-keep, or adaptive cruise. Those features cost money and weigh a lot. You do get the mandatory reversing camera in the 7-inch touchscreen, and if you want to pay the extra $900, you can get a serviceable navigation system, but that’s about it. Can we count a tire pressure monitoring system as technology? 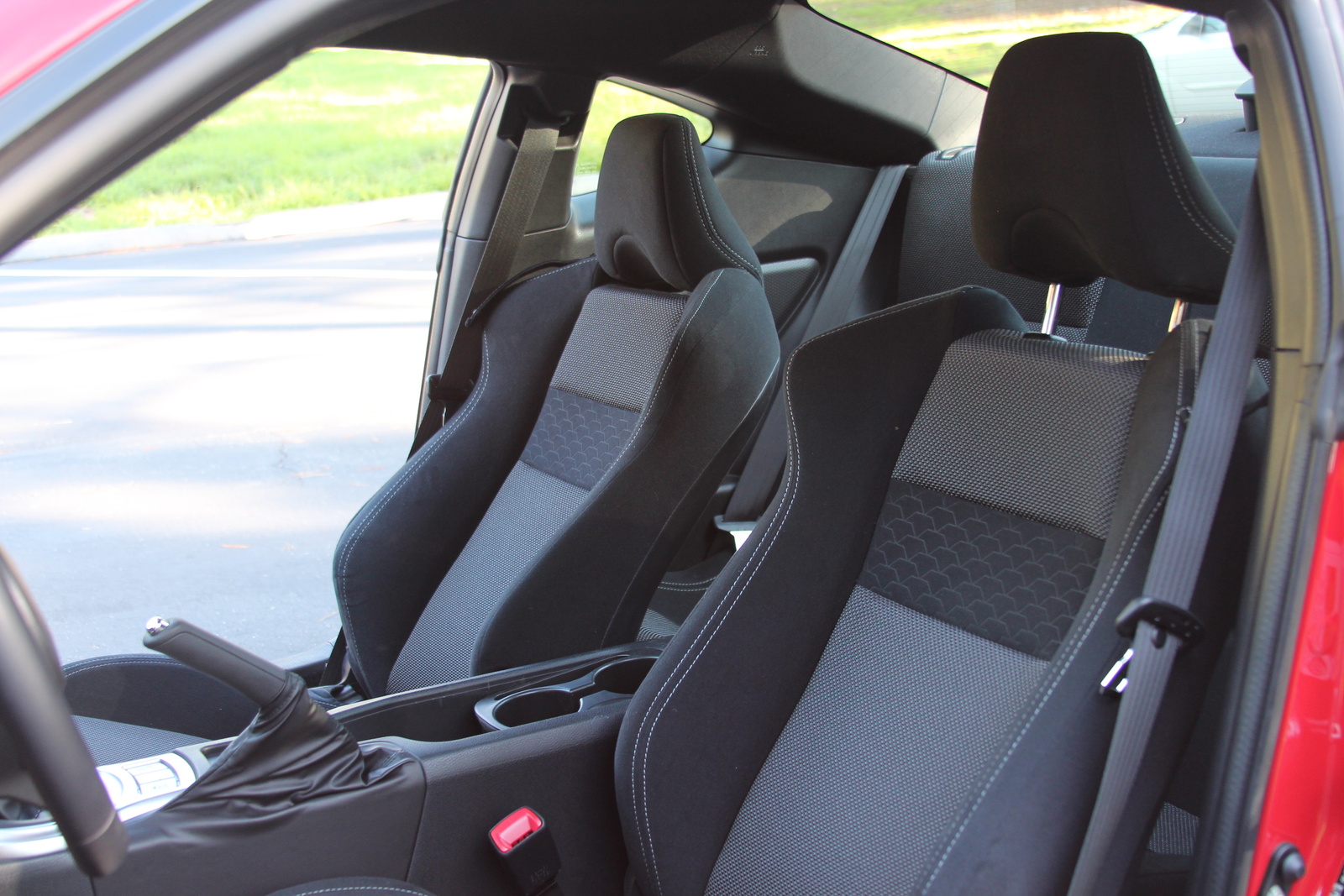 What’s the other advantage of a low curb weight? Braking. Depending on the source, people have been able to achieve 60-0 braking distances of as little as 115 feet. Lose the stock low-rolling-resistance tires and toss on some sticky shoes, and that’ll drop even more.

Beyond that, there’s not much of note for the 86. Standard traction and stability control offer predictable and gentle supervision—when left on—with none of the abrupt and disconcerting interjections that more aggressive systems can produce. That said, despite Toyota’s assurance that the new “Track Mode” completely disengages the stability control, the system remains engaged even when in Track Mode. Like I mentioned previously, it’s just a more permissive tune, but it’ll still insert itself into the proceedings if things get too out of hand.

A full suite of airbags including side-curtain bags will keep you safe in an accident, and the 86 has actually done quite well in testing. Full marks were achieved in government and independent tests, excepting for a 4-out-of-5-star rating for front impacts from the National Highway Traffic Safety Administration and a second-best rating of Acceptable from the Insurance Institute for Highway Safety in the small-overlap front-impact test. 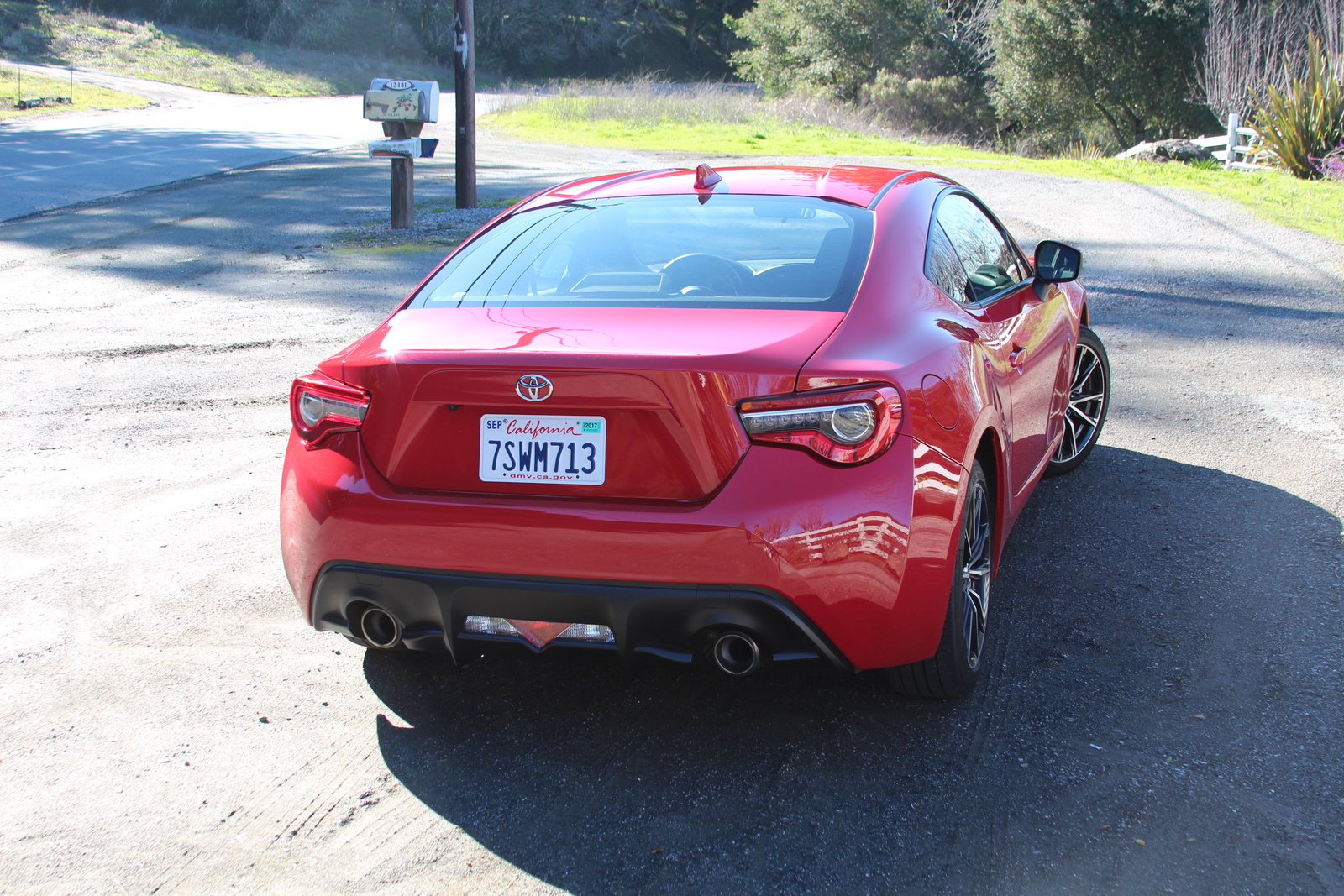 If you want a driver-focused car with 4 seats and a hard top, you’re going to have a very difficult time finding a better example for less money. If you want a bit more style in the interior, plus some additional features like standard navigation, satellite radio, Bluetooth, and dual-zone climate control, look to Subaru’s sister offering, the BRZ. Pricing is a bit higher, but if you add the navigation to the 86, you’ll be in the same arena, plus you get some neat toggle switches and a big, red Start button with the BRZ. When the Scion FR-S was still alive, the two cars differed in their suspension tuning, but I believe the 2017 86's changes will bring the two cars nearly into line with one another. If the history of the AE86 Corolla appeals to you, go for the 86, otherwise the BRZ is the better deal.

Users ranked 2017 Toyota 86 against other cars which they drove/owned. Each ranking was based on 9 categories. Here is the summary of top rankings.

so i heard its bad to finance a car , but i want my first car to be a really nice car & i make 2,000$ a month at my job, should i just save to fully buy a car in the future or make payments on a ne...

23 views with no answers yet