America’s least-popular pickup is hungry for attention, so we took the redesigned Nissan Titan to Canada to find out how this full-size truck performs. 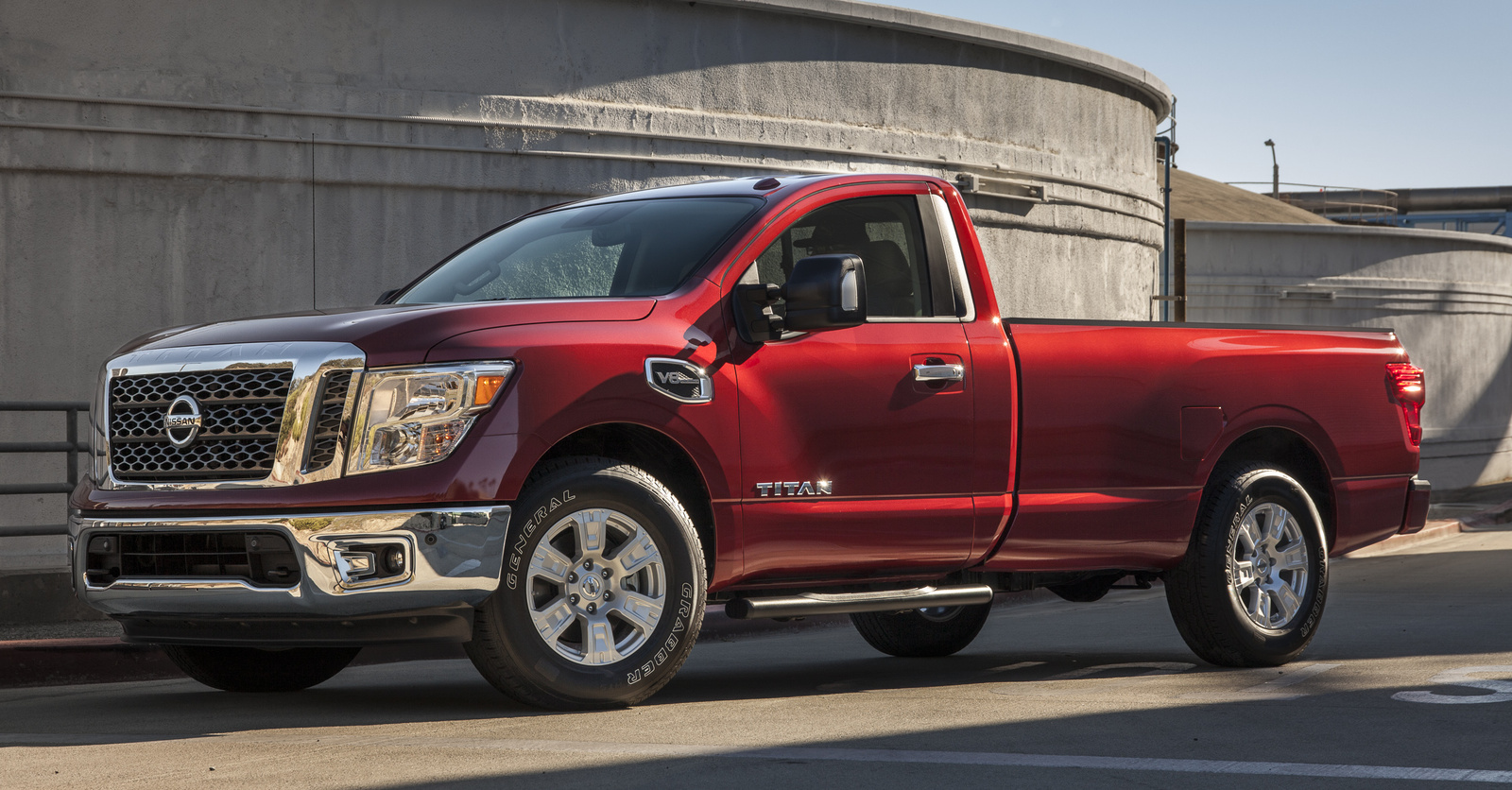 Like loose change under a sofa cushion, the Nissan Titan has been here all along, waiting to be discovered. In 2016, 8,000 people grabbed one. The other 2.7 million truck buyers found a Ford, Chevy, GMC, Ram, or Toyota. Even the minivan-based Honda Ridgeline was a bigger hit. But popularity contests shouldn’t be your only guide when choosing a full-size pickup. There’s a real truck here, and it’s worth a look. 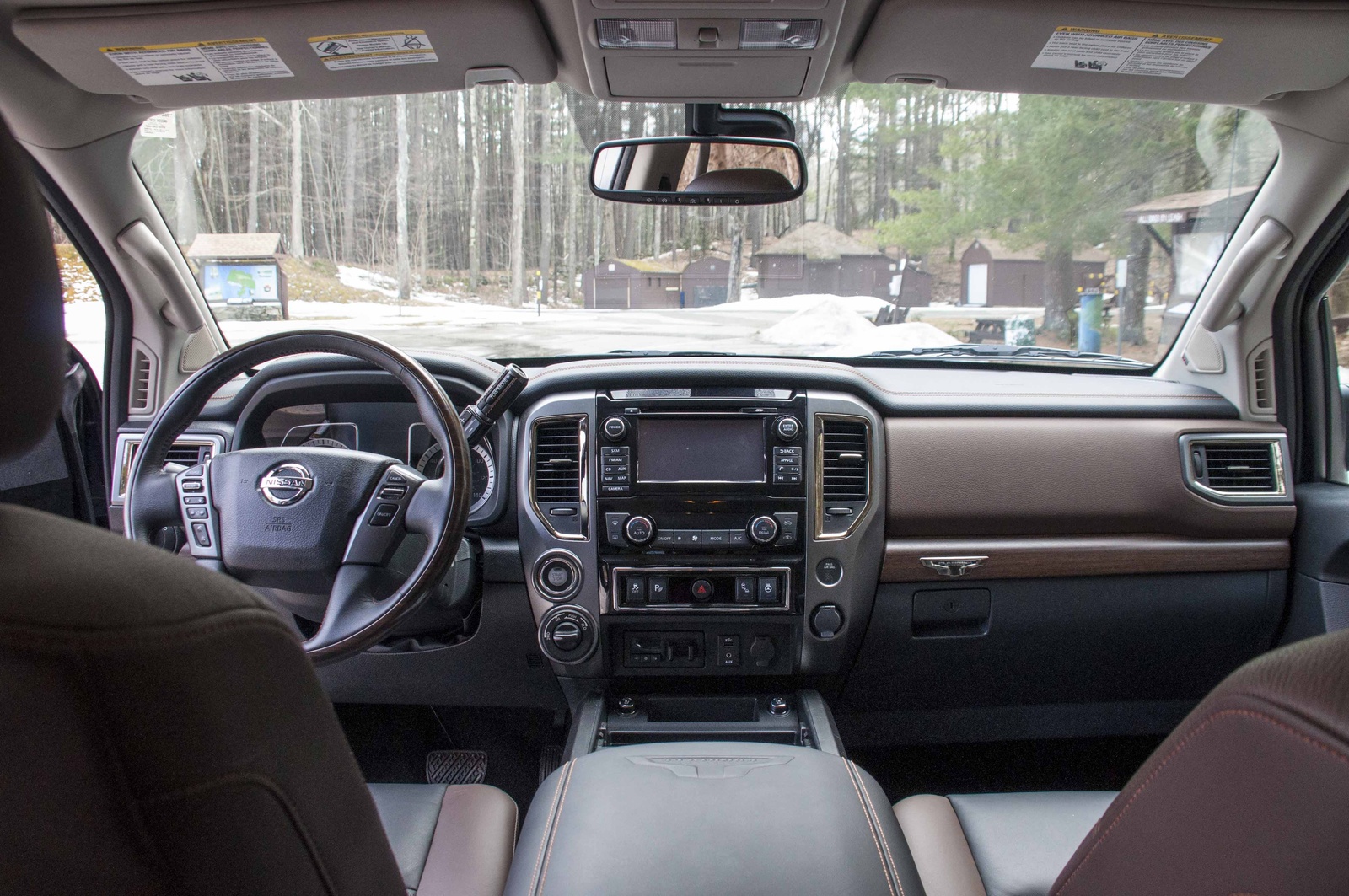 Cover the Nissan badge and you’ll see the Ford F-150. So will F-150 drivers, who gave our brown-and-tan Titan a puzzled eye when we passed them on the highway. It’s as handsome and macho as any other truck, especially our top-end Platinum Reserve crew cab trim with the polished 20-inch wheels, two-tone paint, and two-tone brown leather interior with quilted stitching. Who wouldn’t feel invincible when piloting this rig, knowing the word “TITAN” (in capital letters) is embossed on the oversize chrome grille? Only next to an actual F-150 is the Titan a generic substitute. Sure, it’s a burly pickup truck and extremely functional. But considering Nissan waited 13 years to introduce its first-ever redesign—the Titan was new for 2016—the timid styling and Ford-inspired shapes are a turnoff. Nissan designers could have cast magic on this large canvas by incorporating the aggressive, V-shaped motifs that appear on the Murano SUV and Maxima sedan. Or something remotely inspiring. Nissan’s other creations, right down to the best-selling Rogue and Altima, are far more distinctive than their respective competition.

Inside is marginally better, with our Titan’s contrast stitching covering the dash, brown and black seats, and even the column shifter. The seat upholstery is richly trimmed in two grains and colors, plus they’re incredibly soft and supportive in both rows. But cheap-looking wood, a boring instrument cluster, and dated switchgear make the Titan feel like it wasn’t brand-new for 2016. The Titan skips the finer details befitting the latest high-end trucks. Hard plastic to the right of the steering column interrupts the wood tracing the dash, and the rear backrests don’t recline. Pickups like our $58,430 Titan Platinum Reserve play in an elite segment, and it takes only a few minutes inside a loaded Ram Laramie, Sierra Denali, or F-150 King Ranch to tell the difference. For base and mid-grade buyers faced with a $40,000 price, the Titan’s digs are sufficient. 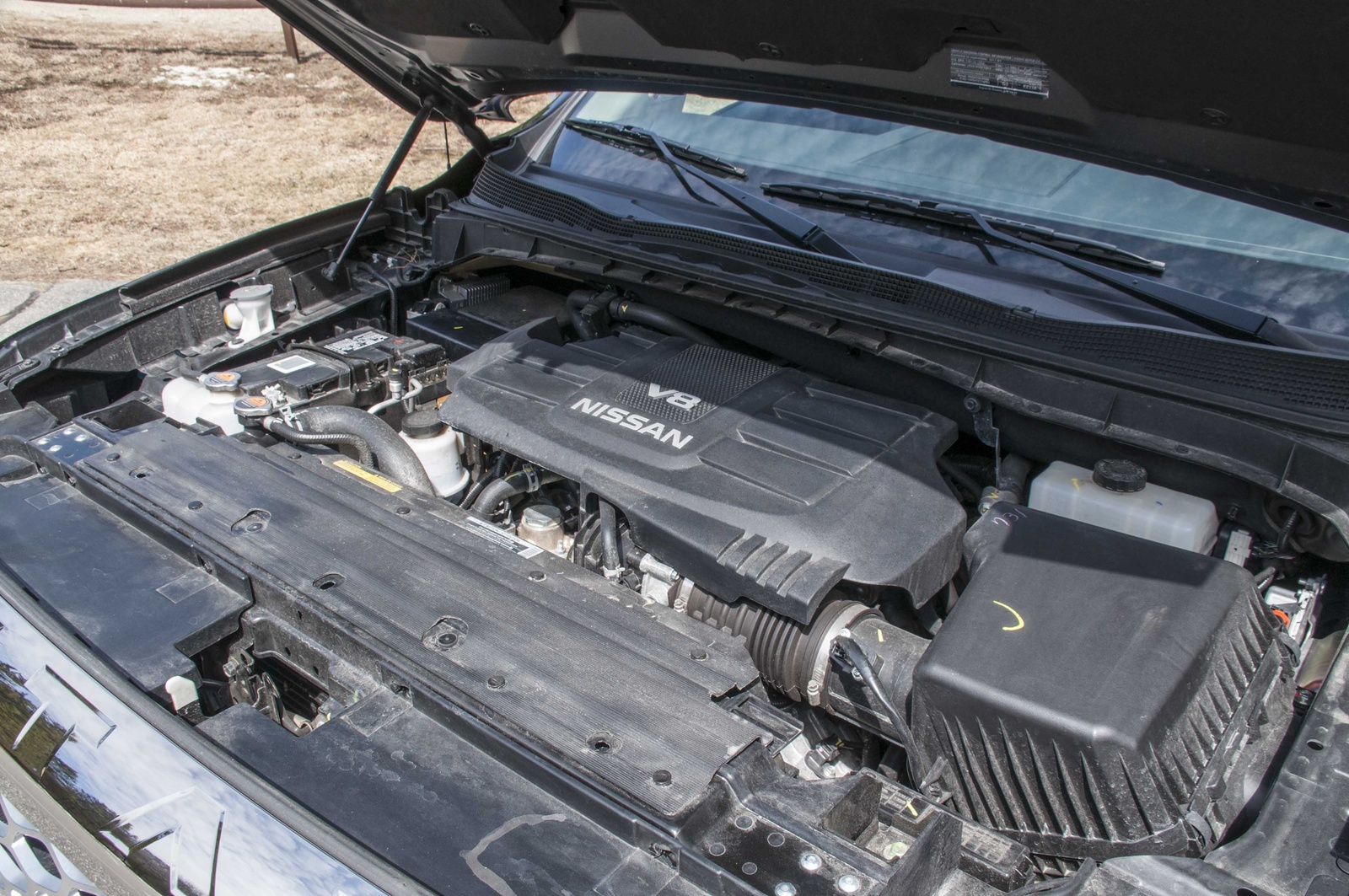 The Titan comes in two strengths. There is the half-ton model we tested and the XD, a tweener truck that’s tougher than a typical light-duty pickup but can’t match a three-quarter-ton heavy-duty pickup like the Ford F-250 or the 2500-series GM and Ram trucks. Nissan claims the XD rides better than a heavy-duty pickup while offering the beefier powertrains expected in this class, such as an optional 5.0-liter Cummins diesel V8 that makes 310 horsepower and 555 pound-feet of torque. Our truck carried the gasoline 5.6-liter V8 with 390 horsepower and 394 pound-feet of torque. Both engines pair with a 7-speed automatic with manual control (plus and minus buttons) on the thick column shifter. Not only did this V8 give us a pleasant grunt under full acceleration, it hauled four grown men and their luggage to Montreal and back without much effort.

Double-paned front window glass on our Platinum Reserve kept wind noise to a minimum. Suspension travel and steering are par for a full-size pickup; the ride is stiff over uneven surfaces, and handling is lazy. Long highway cruises in the Titan, including a blast through Vermont in a late-March snowstorm, were comfortable and confident. But if you spend a lot of time in slush, we’d recommend knobbier treads than the standard Goodyear Wrangler SR-A tires, which had the uncomfortable tendency to tram and follow ruts in light snow (a trail-tuned Pro-4X trim would take care of that). Over 750 miles, we averaged a decent 17 mpg, right in the middle of the Titan’s EPA rating of 15 mpg city, 21 highway. 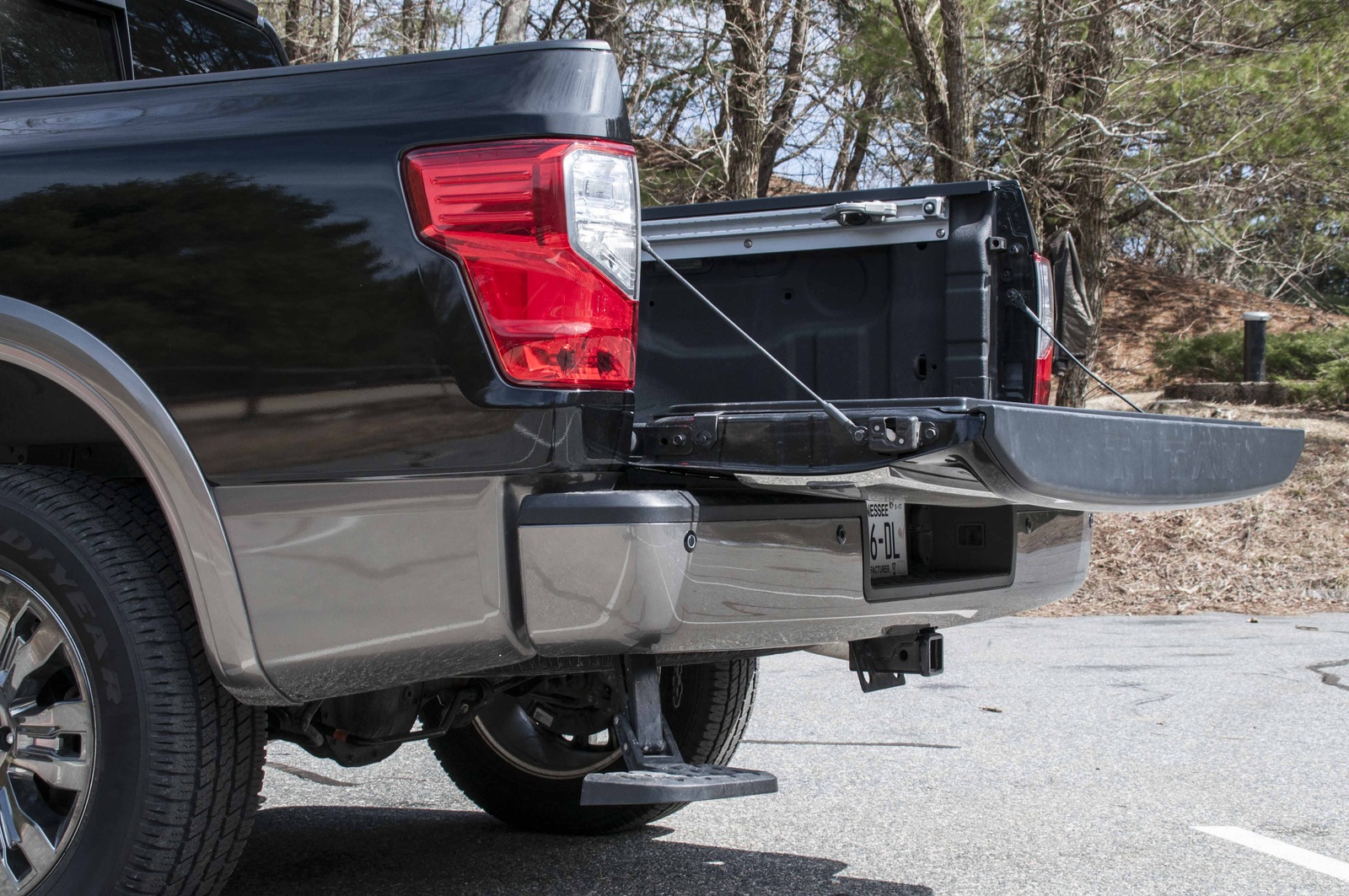 Only crew cab (four full doors, 5.5-foot bed) or single cab (no rear seat, 6.5-foot bed) body styles are available. A king cab (extended half-door, 8-foot bed) will be available later in 2017. No matter which body style you choose, the Titan is rated to tow 9,390 pounds and carry 1,610 pounds; the Titan XD notches those ratings up to 12,640 pounds and 2,910 pounds, respectively. We didn’t have a boat or any big load to test, save for a tarp we cinched to the four metal tie-down cleats in the bed. For $150 extra, these cleats utilize the five bed rails (two on the floor, three along the upper sides) and can be clamped anywhere. They’re in addition to fixed metal loops at all four sides. LED lighting, a power sliding rear window, and a 400-watt AC outlet complete the bed. The foldaway footstep ($245) underneath the left portion of the bumper is a friendly climbing boost, though GM’s notch step cut into the actual bumper is a more elegant solution.

Large side-view mirrors with convex outer mirrors and blind-sport warnings proved very useful. Ingress and egress is simple, too, thanks to wide door openings and ample head- and legroom in all seating positions. Like the Honda Ridgeline, the Titan’s rear bench folds upward 90 degrees to fit taller packages, but a storage tray for the jacking tools and the driveline hump can’t match the Honda’s flat loading floor. A deep central storage bin with a padded leather armrest swallows most small items, and rear passengers have air vents and a second 400-watt AC outlet, which powered a laptop for hours. We’d have preferred more than one USB port. 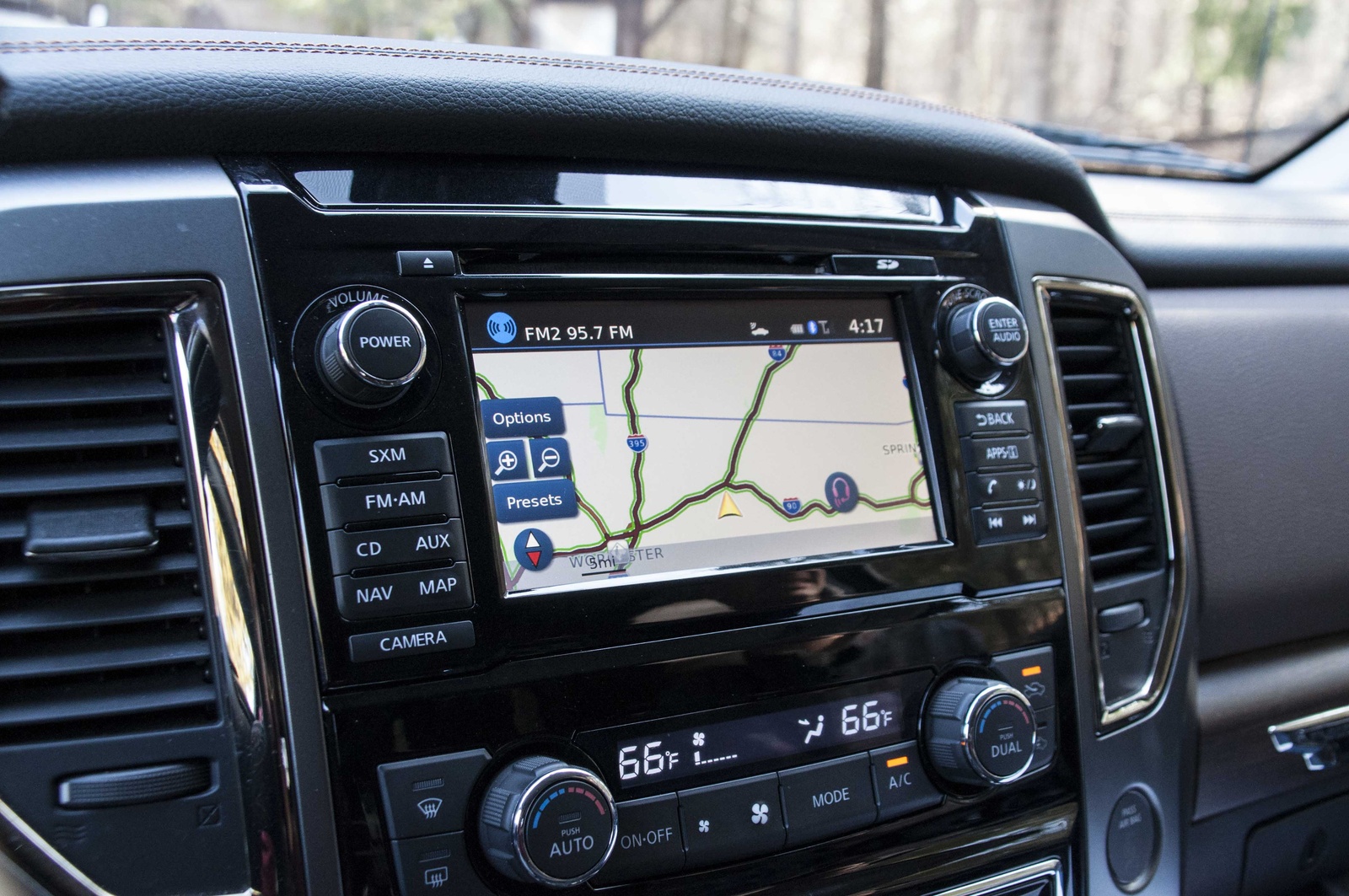 Credit Nissan’s 7-inch touchscreen for simplicity and speed, along with dedicated hard buttons flanking the screen for easy, quick access to vehicle functions. The only issue? It looks old, with the kind of crude white text and blue screens that recall 1990s VCRs. Apple CarPlay and Android Auto are not offered, and the navigation system's maps are devoid of detail. Wading through the central instrument cluster display, which can show the road’s incline and tilt angles, is a better user experience. That said, the Titan’s live traffic, voice recognition, Google destination search, and app support for Pandora and iHeartRadio are saving graces. So is the NissanConnect telematics service, which provides stolen-vehicle tracking, remote unlocking, and automatic 911 dialing in the event of a crash.

LED low-beam headlights revealed Canada’s dark border highways and Tim Horton’s stores, though the halogen high-beams were less effective. A suite of cameras displaying a 360-degree view, parking sensors, and cross-traffic alerts rescued us as we inched the Titan through a very tight city garage that wasn’t built to accommodate American-size trucks. Quelle surprise! That’s how we felt turning up the 12-speaker Rockford Fosgate stereo to play CDs, satellite radio, or Bluetooth streaming. The thumping subwoofer and clarity of the Surround Sound were quite unexpected and better than that of many luxury cars. And when all four outboard seating positions and the steering wheel are heated (with ventilation for the front), we’d have happily pressed on to the Arctic Circle. 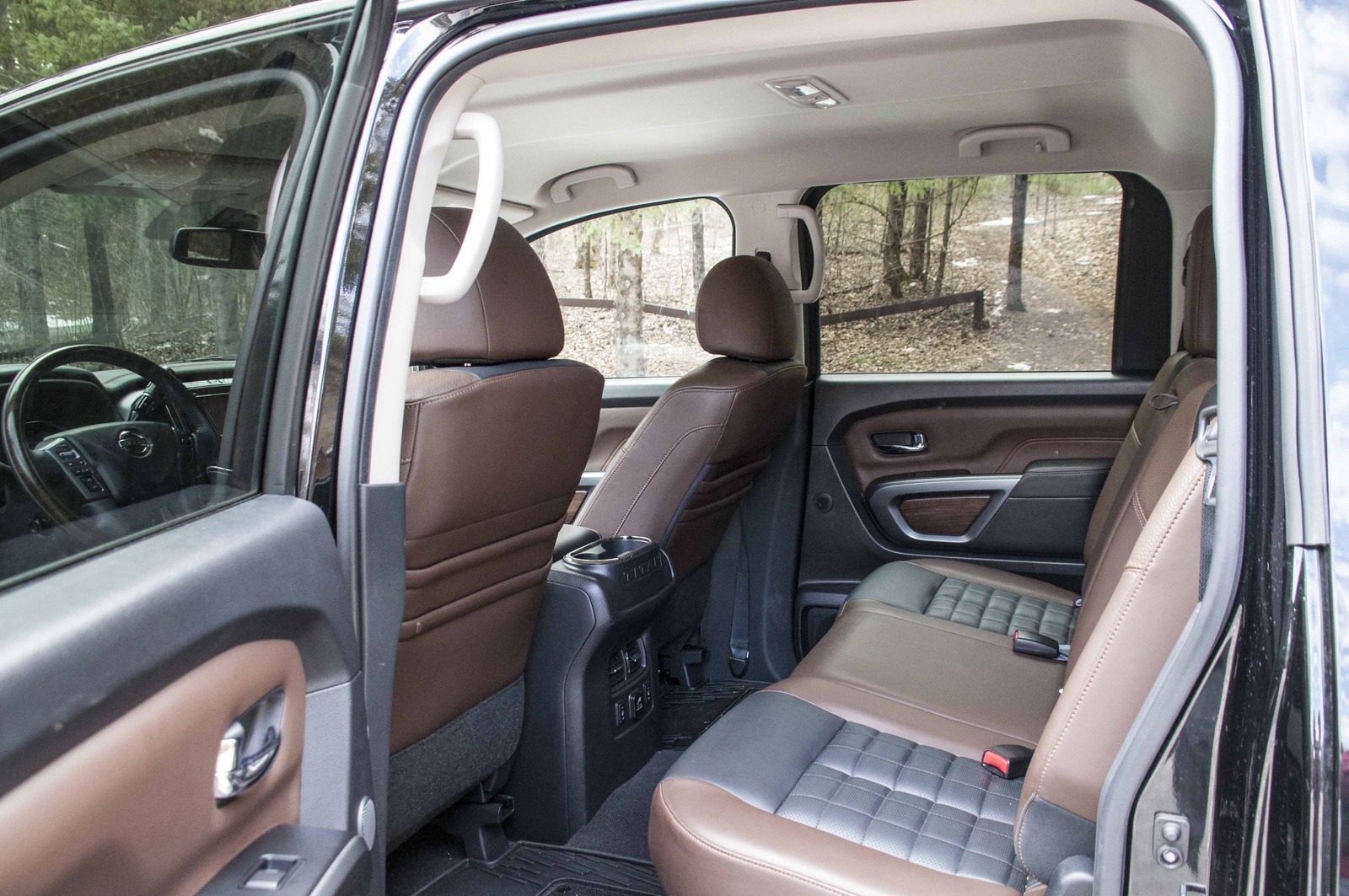 While a full-size truck weighing nearly three tons unloaded is a hefty physical barrier, the Titan scored the second-lowest Marginal rating in the small front overlap crash test conducted by the Insurance Institute for Highway Safety (IIHS). The Titan's driver’s-side door frame ended up intruding nearly a foot into the footwell. It scored the top Good rating in the four other tests. The National Highway Traffic Safety Administration (NHTSA) has not rated the Titan. Aside from blind-spot monitoring, there are no driver-assist features like auto-braking, forward-collision alerts, or anything of the sort. Given what competitors deliver at prices below the $60,000 mark, we expected more. 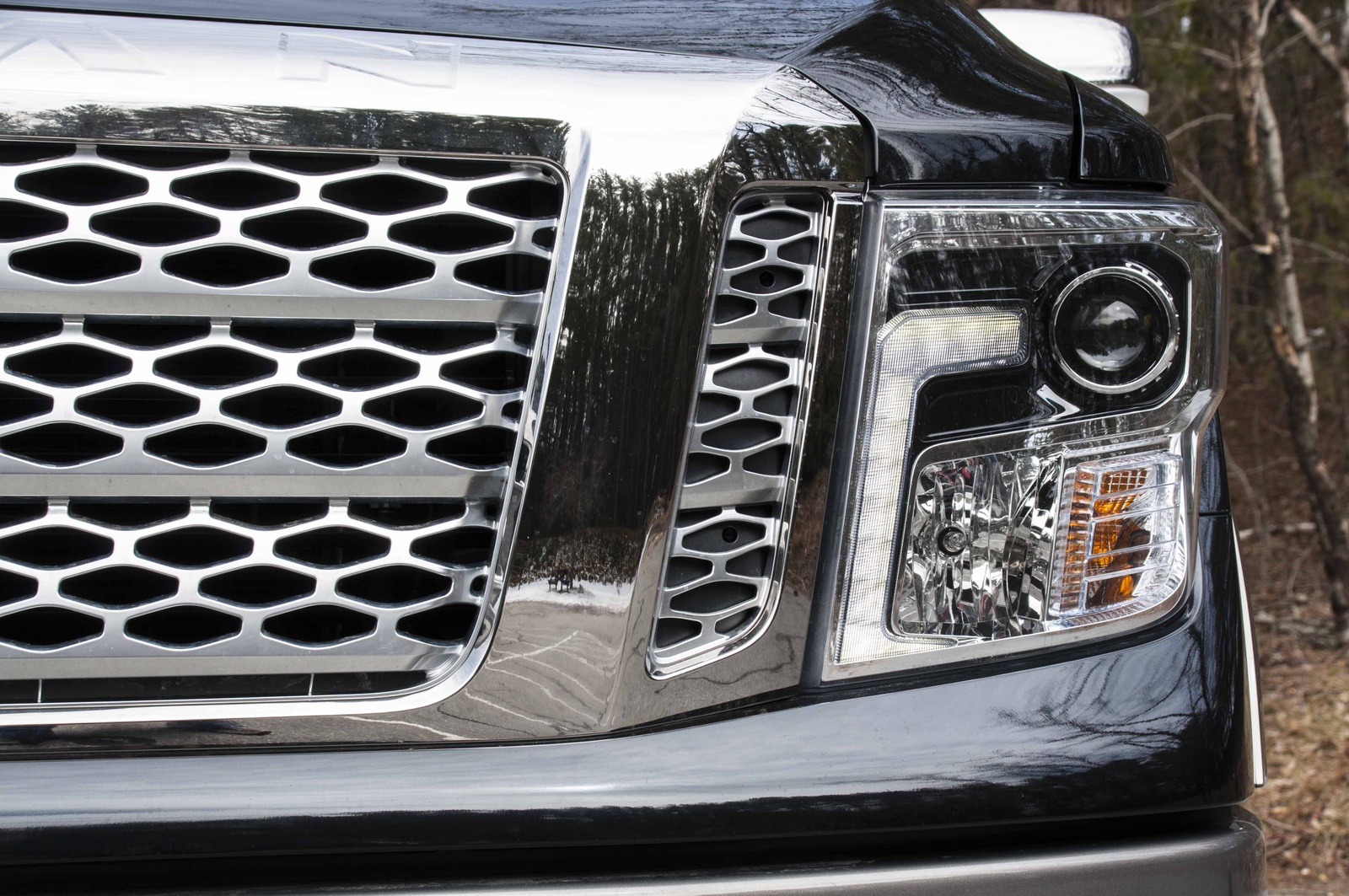 The half-ton Titan has base prices starting from $30,775 to $56,595. The beefier Titan XD lists for $32,285 to $63,155. Five trims (S, SV, SL, Pro-4X, and Platinum Reserve) are at your disposal. An impressive 5-year/100,000-mile warranty covers the entire truck, including the powertrain. This is the best warranty coverage available in the pickup class, as all the Titan’s competitors offer limited warranties at 3 years and 36,000 miles. Considering the Titan’s low sales, it shouldn’t be hard to bargain on a lower price at your local Nissan dealer. The Titan is not as refined, stylish, or tech-laden as most competitors, but it’s still a trusty workhorse that just might raise some eyebrows the next time you park next to your Toyota and Chevy friends.

Users ranked 2017 Nissan Titan against other cars which they drove/owned. Each ranking was based on 9 categories. Here is the summary of top rankings.

Have you driven a 2017 Nissan Titan?
Rank This Car

Can I Upload A Pdf File?

Trying to upload a carfax pdf file to a potential buyer and your system wont let me. Am i doing something wrong? How do i attach it from my computer?

What Does It Cost For Selling

How much does carguru charge for selling a vehicle?

What Happened To The Offer For 2017 Tjtaan ?

Offer that was made.

What Are Flagged Issues