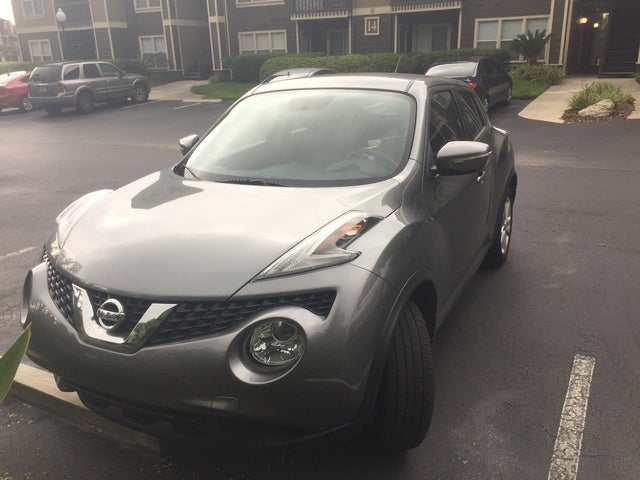 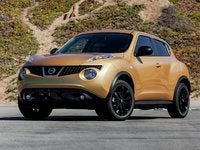 Average user score
4.4 ⁄ 5 stars
Based on 8 reviews
Review by Algene — I love the juke! I love the 2017 t theyre really packed with a lot of different options which is great. the models SL in the SV are super jazzy Read more
Review by Guru319ST — I loved my Juke that I leased and would highly recommend That model car. Read more
Review by GuruGZKZH — I thought the price was to high for a basic automobile, and there were some minor defects on inside and outside Read more

Expected back in 2017 with no major changes announced so far, Nissan’s Juke compact crossover targets those folks with a sportier nature who also need a more practical commuter. Originally introduced for the 2011 model year, this 5-passenger 5-door mini-ute boasts a standard turbocharged powerplant, plenty of agility, loads of standard features, and, of course, the available Juke Color Studio option, with its personalized color combinations.

Most of Nissan’s efforts for the upcoming year seem focused on a total redesign for the Armada SUV, updated GT-R and GT-R Nismo models, and a new 5.6-liter engine on the Titan Crew Cab full-size pickup.

Words like “cool”, “funky”, and “quirky” have been thrown around while describing previous Juke iterations, and there’s no reason to think next year’s editions will bring anything different. Look for the Juke to come in 5 trims: the S, SV, SL, Nismo, and up-powered Nismo RS. All versions are expected to be delivered with standard front-wheel drive (FWD), while full-time all-wheel drive (AWD) remains optional. Cargo space stands at 35.9 cubic feet, considerably less than most rivals in its class, and the rear seats can get a little cramped for the average-size adult.

A 1.6-liter turbocharged inline 4-cylinder (I4) powerplant is standard aboard the 2017 Juke S, SV, Nismo, and SL, with the Nismo RS carrying an up-tuned version of the same engine. On the lower-cost trims, the I4 puts out 188 hp and 177 lb-ft or torque under the management of a standard continuously variable transmission (CVT). The FWD Nismo is eligible for an available 6-speed manual transmission that actually means better gas mileage. The EPA estimates that current FWD Jukes with the CVT get 28 mpg city/32 highway/30 combined, while AWD versions are estimated at 26/31/28. FWD Nismo trims with the manual are estimated at an impressive 28/34/30.

On the Juke Nismo RS, the turbo I4 produces 215 hp and 210 lb-ft of torque with FWD and 211 hp and 184 lb-ft of torque with AWD. As with its lower-level siblings, a CVT comes standard aboard the Nismo RS, with a 6-speed stick shift optional in combination with FWD. Current mileage estimates should hold for the 2017 Nismo RS, meaning 25/31/27 on FWD editions and 25/29/27 with the CVT and AWD.

Nissan’s unique I-Con system can switch between 3 selectable driving modes--Eco, Normal, and Sport, which automatically adjust the throttle, steering, and transmission--and a climate control mode. This feature comes standard on all trims from the SV up.

Siri Eyes-Free iPhone integration, interfaced with Bluetooth hands-free technology, comes standard aboard all trims, while higher trims also include Nissan Connect smartphone integration, a standard 360-degree camera system, and GPS navigation with a 5.8-inch touchscreen display. Entertainment begins with a CD/MP3 player with 6 speakers and a USB port, while the SL and both Nismo trims boast a Rockford Fosgate ecoPUNCH audio system with 6 premium speakers and satellite radio.

Probably the most interesting option for the Nissan Juke is the Juke Color Studio personalization paint palette, which lets buyers mix and match exterior colors for the mirror caps, spoilers, and wheels with upholstery color combinations to suit individual preferences.

Safety-wise, expect the 2017 Juke to mirror the 2016 edition with such mandated equipment as antilock brakes (ABS), traction and stability control, and front and rear head curtain airbags. Turn-signal-integrated mirrors and a remote antitheft alarm come optional, and front fog/driving lights and auto-leveling headlights are standard on all trims other than the S.

The current Juke gets 4 out of 5 stars for overall safety in government crashworthiness testing, while the Insurance Institute for Highway Safety (IIHS) gives the Nissan its highest score of Good on all tests other than the small-overlap frontal-offset portion, where the Juke received a worst-possible rating of Poor.

Those who aren't wild about the Juke’s styling or lack of interior space might want to look at Mazda’s CX-3. The Chevrolet Trax and Honda HR-V also offer more cargo space and roomier rear-seat accommodations.

Michael Buying a SV awd this week. Considered a CX3 but to get a moonroof you need to buy the Grand Touring. Made the choice easy for me. Forty more horse power and thirty more pounds of torque from 1500 rpm sealed the deal. The Juke has more zoom-zoom

Users ranked 2017 Nissan Juke against other cars which they drove/owned. Each ranking was based on 9 categories. Here is the summary of top rankings.

Have you driven a 2017 Nissan Juke?
Rank This Car