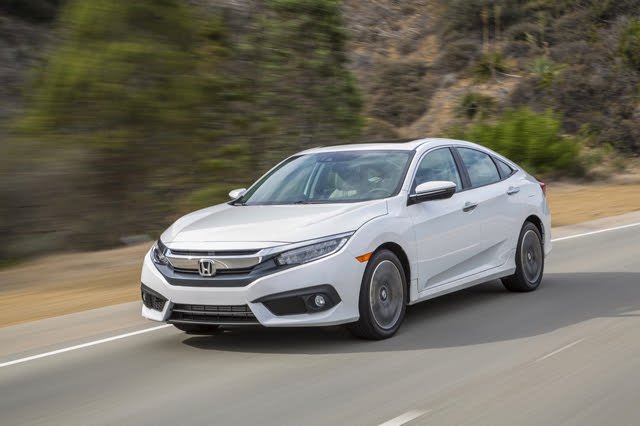 Honda sold more Civics in 2017 than any year in history. Here’s why. 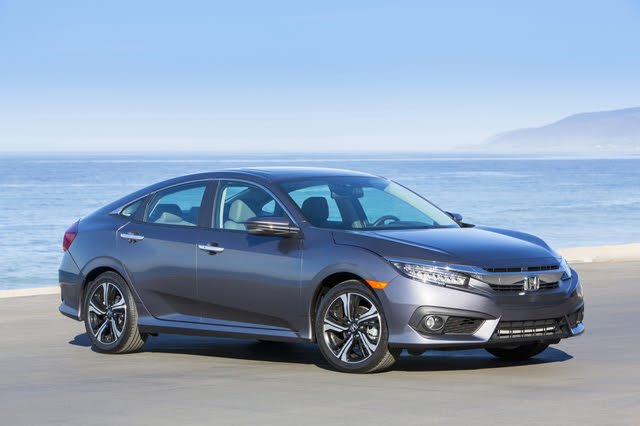 Everything works for the Honda Civic in the second year of its 10th generation: the average price of fuel is higher, the economy has largely rebounded after the financial collapse, and the average American isn’t quite ready to give up sedans for crossovers. As a result, Honda is selling these cars like they’re going out of style, which they may well be. 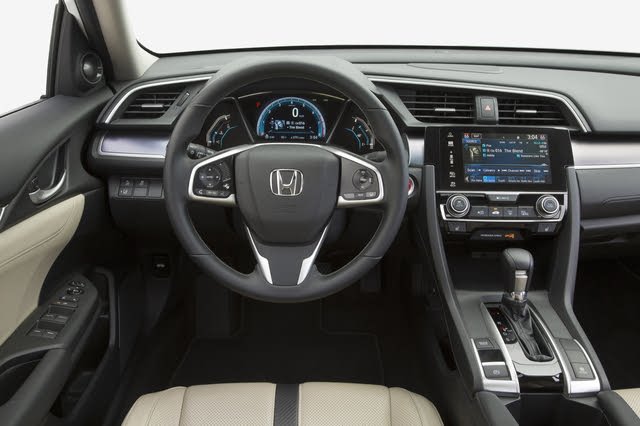 Prior generations of the Civic made a distinction between the three available body styles: The sedan, hatchback, and coupe in the 9th (2012 to 2015) generation, for example, all had a clearly delineated profile. That largely evaporated when the 10th generation Civic debuted in 2015 as a 2016 model.

The Civic is still available in all three body styles for 2017, but you’d have to look hard for door openings—or the lack of them—in profile. All three cars have a fastback style that makes it hard to distinguish one from the other. Inside, the 2017 Civic is stylish and modern in every trim, yet simultaneously more conventional, with an instrument panel that dispenses with the distraction of the bi-level cockpit from the previous generation. The more attractively styled, contrasting upholstery patterns are visually appealing, and the seats themselves are more comfortable and supportive than prior generations. 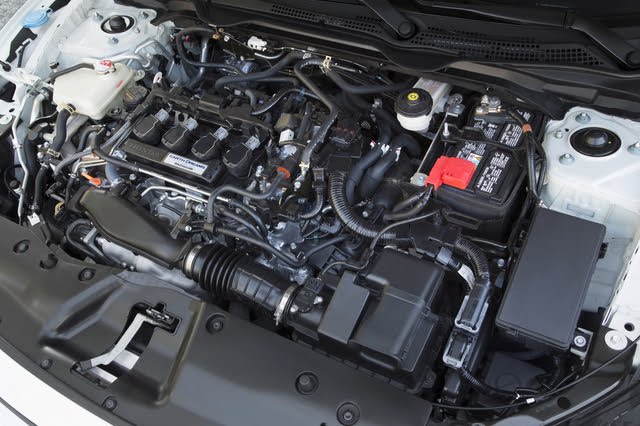 The base engine for the Civic Sedan and Coupe is the naturally-aspirated K-Series 2.0-liter four-cylinder, producing 158 horsepower and 138 pound-feet of torque at 4,200 rpm. The hatchback has one powertrain available—a 1.5-liter turbocharged four-cylinder engine—which dials performance to 180 hp, peaking at two different levels depending on whether you choose the six-speed manual transmission or the continuously variable transmission (CVT). This engine is available on everything but the base Civic LX trim. All Civic models are front-wheel drive (FWD).

There’s really no reason to opt for the 2.0-liter powertrain, aside from the cheaper MSRP. The turbocharged engine is an amazing little engine that delivers power exactly where most drivers need it. It turns what used to be a rather dull compact car into a truly special driving experience. And that’s true long before you even get to the actual performance models the Civic Si (with the turbo engine, a manual transmission, active dampers and steering, and a limited-slip differential) and the Civic Type R (with an exclusive 306-hp 2.0-liter turbo, and a manual transmission). Fluid-filled bushings isolate the body from the suspension, making the car a more civilized performer than it has been previously, and the steering ratio for better responsiveness. 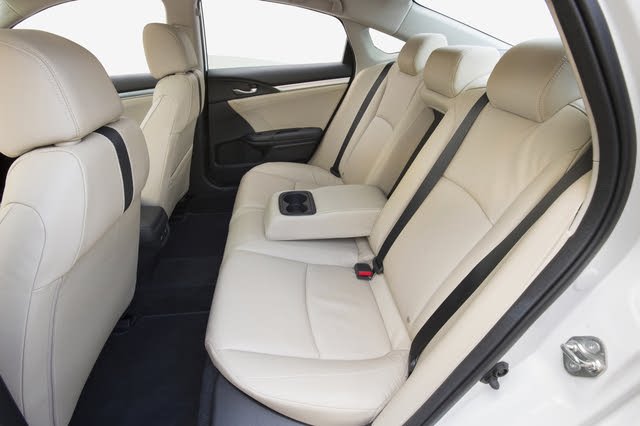 Crossovers are making their pitch for practicality, but large numbers of Americans still choose the Civic Sedan and Civic Hatchback for their blend of passenger space, styling, cargo volume, and driving characteristics.

The swoopy fastback styling may look like it limits cargo space, but space in the sedan, for example, has increased to 15.1 cubic feet from the prior generation’s 12.5 cubic feet. Overall passenger volume also increased by 3.2 cubic feet, making the passenger cabin more comfortable.

The instrument panel design is a step forward from the prior generation, putting all the driver’s information in a single, customizable pod dead ahead of the steering wheel. Visibility improves significantly thanks to much thinner A-pillars between the windshield and front doors. Features that previously were excluded from the Civic, like Remote Start, dual-zone climate control and premium soft-touch materials push what used to be an economy car into near-luxury levels of refinement. 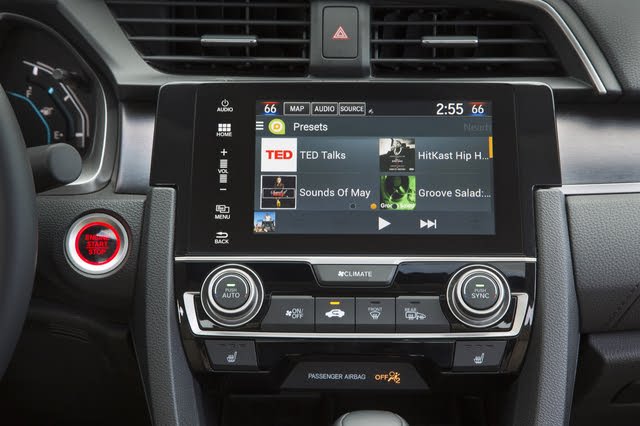 As long as you stay away from the base level LX trim, every Civic trim is jammed with technology as a standard feature, including push-button start, automatic climate control (with dual-zone standard on the Civic EX-T, EX-L, and Touring trims), the 7-inch Display Audio touchscreen, Bluetooth, Android Auto, and Apple CarPlay. Unfortunately, you need to step all the way up to the top Touring trim for features like LED headlamps, rain-sensing wipers, and a power passenger seat.

There’s not much of an upgrade in terms of audio performance across trim levels, either. Again, the best stuff is reserved for the Touring, which goes from the base 160-watt audio system up to 450 watts, and increases from eight speakers to 10, including a 7.9-inch subwoofer in the rear deck. 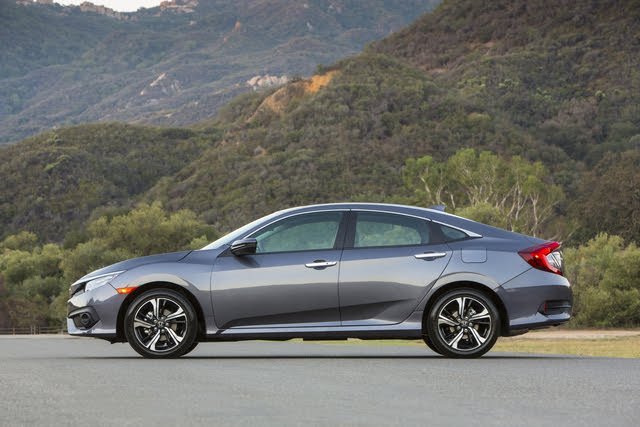 The basic structure of the Honda Civic—monocoque construction that Honda refers to as “Advanced Compatibility Engineering (ACE) body structure with new crash-stroke design”—gives the Civic a stout basis for crashworthiness in every trim.

What keeps the 2017 from earning 10 out of 10 points for safety is that the safety features in the Honda Sensing suite of technology—including road-departure mitigation, collision-mitigation braking, lane-departure warning, and adaptive cruise control—is only available as a standard feature in the most expensive Touring trim. With every other trim, it’s optional. That technology is part of what earns the Civic a Top Safety Pick+ rating from the Insurance Institute for Highway Safety (IIHS), meaning if safety is a factor for you, you need to either buy a Civic Touring or seek out a lesser trim with the Honda Sensing option package added. The 2017 Civic also earned a five-star rating from the National Highway Traffic Safety Administration (NHTSA). 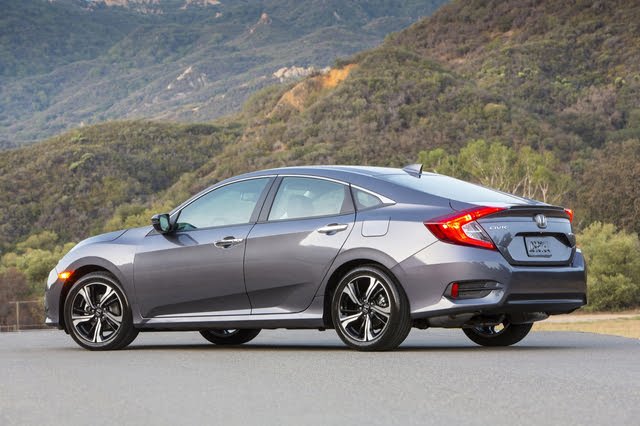 With the 1.5-liter turbo and CVT, the Civic posts the best EPA highway and combined fuel economy when compared with the Toyota Corolla, the Hyundai Elantra, and the Ford Focus. It ties for city MPG with the Elantra. Compared to the average new vehicle, you’d save $1,750 per year in fuel costs.

As a new car, the Civic’s base price is competitive with all of its contemporaries, but at the high end, the Touring trim is significantly more expensive than these competitors. However, that may be because the competition either doesn’t offer the advanced safety equipment in the Honda Sensing suite, which is standard equipment on the Touring.

Dennis If you are 6ft or taller, you will need a chiropractor. There is no adjustable Lumbar on the LX. It is full on. It is killing me. I did not notice in test drive. Drive it for an hour, and you will feel it. This is my fifth Civic. I have never had this issue.

Alan Best car seat I've ever known, and I've know a lot! I'd driven about 2,500 miles and never think about it's comfort. Of course I sit on a big soft cushion. It's a dream come true!!! Other seats have no lumbar support, but the Civic needs NO adjustable lumbar support! Try it out yourself! IF anything the car like all others nowdays, cradles your shoulders which is fine if you've got a round rolly polly kind of body, then that would be helpful to keep you in the same place.

Users ranked 2017 Honda Civic against other cars which they drove/owned. Each ranking was based on 9 categories. Here is the summary of top rankings.

Have you driven a 2017 Honda Civic?
Rank This Car

I have a Honda Civic EX-L 2017, i got a message stuck on The display saying” incoming call” gives me the option of “ answer or Deny” i touched either or but message won’t go away, also won’t let me...

766 views with 3 answers (last answer about a month ago)

One day after I bought my brand new 2017 Honda Civic, several warning lights appeared on the dash while driving; including check engine, vehicle stability assist, electronic power steering, and low ...

I just finished a 6 hour drive with my Civic, and parked it at my house for a few hours no problem. When I tried to drive somewhere, I got a ton of error messages about things all of a sudden not wo...

I bought my 2017 honda civic hatch last week and now all of a sudden my keyless entry to lock and unlock the doors isn't working and neither does the auto start ... help!

Earlier my 2017 honda civic apple carplay displayed a screen saying something like that the system lost power hold for 2 sec to reset which i googled and happened to others. What happedned next i c...