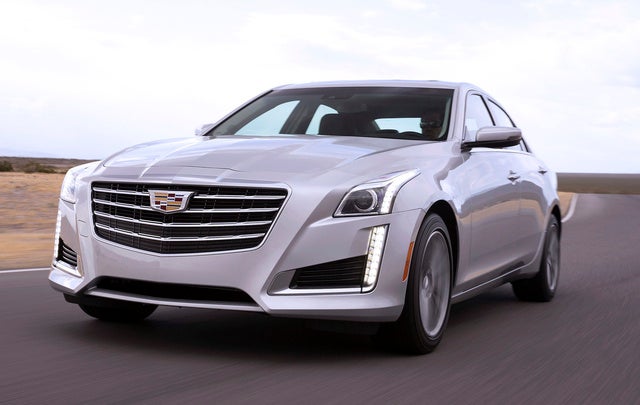 The “Cadillac of Cadillacs,” the CT6 serves as the brand’s new flagship—and its first genuinely competitive large luxury sedan in decades.

Unlike the last handful of Cadillac range-toppers, the CT6 shares little with the rest of parent company General Motors’ other models. Instead, it utilizes its own highly advanced aluminum structure underneath its angular, svelte styling.

The CT6 may look relatively small thanks to its short overhangs and trim details, but the sedan stretches 204 inches from head to toe. That puts it somewhere between rivals like the BMW 5 Series and 7 Series. But despite that size disparity, the CT6 is priced and powered more like the smaller 5 Series.

Thanks to the extensive use of aluminum and other weight-saving materials, the CT6 weighs less than the 5 Series despite offering considerably more interior and cargo volume. That light weight also makes it especially lithe on its feet for such a large 4-door, and it means its power-to-weight ratio is decidedly advantageous over that of its rivals.

To that end, the CT6 offers a trio of engine choices: A 2.0-liter turbocharged 4-cylinder, a 3.6-liter V6, and a 3.0-liter twin-turbocharged V6. The base 2.0-liter variant can be paired with either rear- or all-wheel drive, while both V6 models exclusively send power to all four wheels—a boon for wintry weather markets.

But the real newsmaker is the top-of-the-line 3.0-liter twin-turbocharged engine, which delivers an impressive 404 hp. Thanks to the turbochargers, which allow more power to be extrapolated from a smaller engine, the 3.0-liter is rated at a decent 18/26/21. All told, that is a minor fuel-economy hit for a lot more power.

Making the most of that performance is a suspension designed with a decidedly European flair. Cadillac again looked to aluminum to help shave weight, but it is the company’s Magnetic Ride Control system that really helps the CT6 stand apart. Developed initially for the Chevrolet Corvette sports car and now utilized in a number of Ferraris, Magnetic Ride Control utilizes a high-tech fluid to help the suspension soak up bumps while retaining a degree of stiffness to keep the car flat and stable in corners.

Buyers looking for even more handling poise can opt for an available Active Chassis System that features rear-wheel steering. In short, the rear wheels are able to move slightly in order to reduce the car’s turning radius in urban areas and to balance its handling on wide, sweeping corners at higher speeds.

Befitting its luxury segment positioning, the CT6 offers a wide array of convenience and safety features.

Look in the CT6’s rear-view mirror and you’re actually looking at a high-resolution video captured by a camera mounted on the car’s trunk lid. The display allows for an unobstructed view behind the car, meaning drivers don’t have to look around rear seat passengers’ heads or thick roof pillars.

Speaking of screens, an enormous 10.4-inch capacitive touch display with a separate touchpad, like that on a laptop computer, serves as an interface for Cadillac’s CUE infotainment system. The system can read a user’s handwriting for faster navigational inputs. General Motors’ OnStar connectivity system comes standard on the CT6, with a concierge service, turn-by-turn directions, automatic collision notification, and a 4G LTE WiFi hotspot. Most of those features require a subscription that can get pricey after the free trial period runs out.

On the luxury front, all CT6s come well equipped, but the Platinum trim level pampers equally with heated, air-conditioned, and power-adjusted seats for every passenger.

Users ranked 2017 Cadillac CT6 against other cars which they drove/owned. Each ranking was based on 9 categories. Here is the summary of top rankings.

Have you driven a 2017 Cadillac CT6?
Rank This Car

Wipers Work On High And Medium Only, Need Help

Wipers work on high and medium only, but the intermittent speed does not work. Can only turn them on where the work continuously or off. Could this be a fuse, or a different problem?

Do All CT6 Come With Rear Steering?

Wondering do all CT6 AWD come with rear steering?