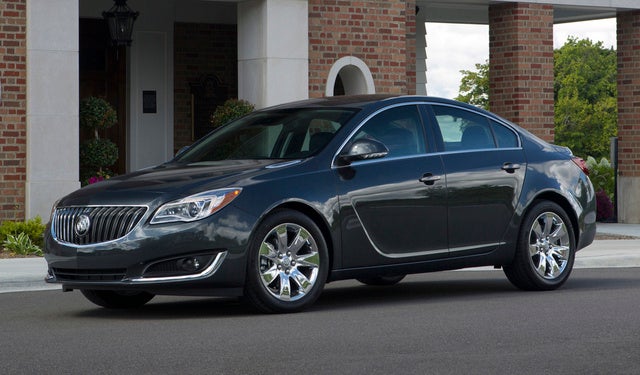 Due to the popularity of its compact Buick Verano sedan, General Motors decided it was time to revamp one of its mainstays into something new and slightly larger. The sixth-generation Buick Regal midsize sedan, expected sometime in 2017, will come with a roomier, lighter-weight design than previous incarnations, and will more than likely be built in Germany, rather than in Canada, where previous versions were assembled. The new Regal will cater to a jack-of-all-trades mentality, blending style, performance, safety, and fun in what is essentially a family vehicle that rides like a luxury car.

For 2017, the Regal will borrow GM's new E2XX platform from the 2016 Chevrolet Malibu, replacing the previous year's short-wheelbase Epsilon II platform. This means the newest line of Regals will be slightly longer than previous versions, by an estimated 3.9 inches. For the midsize family sedan market, the Regal will straddle the line between a sleek-yet-affordable luxury car and a functional all-purpose sedan.

The E2XX architecture will also shave about 300 pounds from the current Regal model. That should translate into slightly better handling and improved gas mileage.

The 2017 Regal will be available in three trims, including the base 1SV, the Turbo, and the GS. All bodies will display a certain amount of European flair and bear an exterior color of Black Onyx, Dark Sapphire, Blue Metallic, Quicksilver Metallic, or Summit White. While all trims will remain 4-door sedans, some reports indicate that GM will also introduce the Regal in hatchback and wagon body styles for the new generation.

The base 2017 Buick Regal is expected to come equipped with a 1.5-liter LFV Ecotec engine generating 163 hp and 184 lb-ft of torque. Expect fuel-economy numbers of around 19 mpg city/31 highway/23 combined.

The souped-up Turbo and GS versions will come with a 2.0-liter Turbo LTG powerplant producing 259 hp and 295 lb-ft of torque. It clocks in with EPA estimates of 20/31/24. Both engines will link to a 6-speed automatic transmission that can be switched out for a 6-speed manual gearbox. Front-wheel drive (FWD) will come standard, but drivers can opt for all-wheel drive (AWD) on all trims.

Expect the GS to have more stability than the base trim due to its 4-wheel HiPer Strut independent suspension, resulting in a less bumpy ride overall. The GS's Interactive Drive Control system will contain settings for automatically optimizing a number of different driving controls.

The interior is expected to offer slightly more legroom than previous Regals, but most passengers may not notice the small increase. All trims will come with the option to swap out the factory interior with leather, although in grand Buick Regal tradition, the seats will be a bit firmer than what is found in most sedans. Upgrade packages will include driver memory settings, adaptive cruise control, and blind-spot monitoring. Additional standalone options will include a sunroof and ambient lighting controls.

Europeans interested in the 2017 Buick Regal will want to seek out its European counterpart, the Opel-Vauxhall Insignia. The Opel and the Regal have traditionally been the same car, for all intents and purposes, and the 2017 versions are expected to be no different in this regard.

The 2017 Buick Regal shares many of its designs, engine specs, and interior and exterior features with the 2017 Volvo S60, the 2017 Lexus IS, and the 2017 BMW 3 Series. However, the new Regal will be a little more affordable than these other luxury family vehicles.

Forsa_667 On paper , it appears to be a great car for the price.

Have you driven a 2017 Buick Regal?
Rank This Car

My check engine light is flashing as my car murmurs as it starts to smell of gas what is wrong with it? (it is a 2017 regal buick)

I need to change my zip code and area of search.