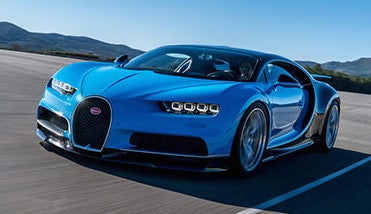 Looking for a Used Chiron in your area?

CarGurus has 1 nationwide Chiron listings and the tools to find you a great deal.

When Bugatti launched the Veyron in 2005, it instantly set the gold standard for on-road automotive performance. With 1,000 hp and record-setting speed, the Veyron even changed the vernacular: the term “supercar” was supplanted by “hypercar,” and the Veyron stood alone.

Fast-forward more than a decade, and the ultra-performance car landscape has evolved. Not only have McLaren, Ferrari, Koenigsegg and others offered up rival vehicles, but new technologies like hybrid powertrains and exotic materials have also been leveraged in pursuit of the ultimate performance car. Fed up with these suitors to the hypercar throne, Bugatti has released the first successor to the Veyron, the 2017 Chiron. Engineers at the French automaker expect it to once again raise the bar.

It is readily evident that the Chiron is no ordinary car. Were it gutted of its 16-cylinder engine, it would still have art museum directors lining up for a chance to put it on display. The dominant styling element is the massive “C” that flows from beneath the doors and returns to frame the side windows. This characteristic, which pays homage to the vintage Bugatti Type 57 Atlantic, also frames the two large air intakes. It is outlined in a metallic finish, giving it the crisp aesthetic of a tailored suit paired with a designer watch.

At the heart of the Chiron is a masterpiece of engineering, an 8.0-liter quad-turbocharged W16 engine. In essence, a W16 is two V8 engines mated to each other. This is the same basic setup as on the outgoing Veyron, but it has been heavily updated. The engine now features direct injection and two of the four turbos are electrically driven, which reduces what is known as “turbo lag.” The result is a powerplant that creates 1,479 hp and 1,180 pound feet of torque.

Power is sent through an updated version of the dual-clutch 7-speed gearbox to an all-wheel-drive setup. The gearbox has been strengthened to handle the added horsepower and torque, while the carbon fiber body is even more rigid than that of the Veyron, thus keeping weight down. And for the truly insane, there is even a Drift Mode, which puts more power to the rear wheels to let the back end swing around.

For safety reasons, top speed has been electronically limited to 261 mph, though the folks at Bugatti contend the Chiron could reach 288 mph, which would make it the fastest production car in the world.

If you’re worryied about fuel economy in a vehicle like this, you’ve come to the wrong place. If you were to run the Chiron at top speed, its 100-liter (26.4-gallon) fuel tank would be dry in just eight minutes!

The Chiron features suspension components directly bolted to the carbon fiber monocoque (a combination of frame and body components in one unit). It also features a new electric steering system. Both suspension and steering are promised to deliver an even more engaging driving experience.

But despite the extensive use of lightweight carbon fiber, the Chiron weighs almost 4,400 pounds. That’s nearly 240 pounds heavier than the outgoing Veyron. To handle the added weight, the Chiron features brakes that are 20mm larger and 2mm thicker than the Veyron's; these brakes are made from carbon silicone carbide, which is lightweight and incredibly resistant to fading. There are 8-piston brake calipers on the front wheels and 6-piston calipers in the rear, and each caliper piston is a slightly different diameter to ensure that brake wear is evenly distributed.

At the rear of the Chiron is an active spoiler with four modes, allowing for more downforce at certain speeds and extending and flattening out during high-speed runs. It can even act as an air brake during hard braking.

Bugatti's vehicles are the playthings of the rich and famous. As such, they are as much about style as they are about substance. The Chiron doesn’t disappoint, with a stunning cabin outfitted in bright hues of leather and accented with carbon fiber and chrome-appointed bright work.

The instrument panel is designed to provide as much information to the driver as possible while minimizing distractions. The analog speedometer goes all the way up to an aspirational 310 mph and there are multiple TFT digital screens. As the car goes faster and faster, all but the most critical information becomes hidden from the driver so he or she can focus on keeping the car in a straight line at blistering speeds.

The Chiron also has such lavish features as a cooled glove box (Yes, but does it have enough room for a 1946 Chateauneuf-du-Pape?), and the bonnet has enough room for a weekend bag. As for safety advancements, Bugatti created the first ever airbag designed to deploy through carbon-fiber dash components.

And what does all this style, performance, and engineering cost? You're looking at 2.4 million Euros, or about $2.66 million. Only 500 of these impressive vehicles will be built, and at least 170 of them have already been spoken for.

For the well-heeled millionaires and jet-setters that will be interested in the Chiron, such a price is surely well worth being the first in Malibu, or Monaco, or Dubai to be seen in one. Their neighbors will surely recognize the vehicle as both a masterpiece of engineering and performance and an example of timeless, world-class style.

What's your take on the 2017 Bugatti Chiron?

Users ranked 2017 Bugatti Chiron against other cars which they drove/owned. Each ranking was based on 9 categories. Here is the summary of top rankings.

Have you driven a 2017 Bugatti Chiron?
Rank This Car

Looking for a Used Chiron in your area?

CarGurus has 1 nationwide Chiron listings and the tools to find you a great deal.